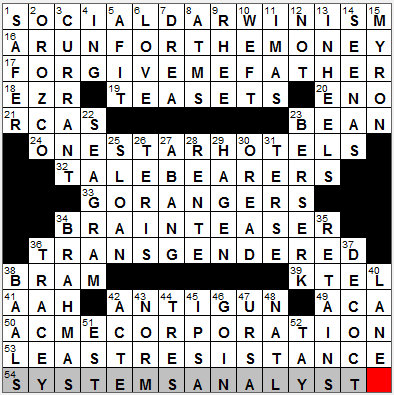 
Today’s Wiki-est, Amazonian Googlies
Across
1. Theory related to eugenics : SOCIAL DARWINISM
The idea behind “social darwinism” is that the principles of Darwin’s theory of evolution can be applied to societies and nations, and explain the endurance exhibited by some peoples.

Eugenics is a belief that society can be improved by selective breeding. The term was first coined by the English scientist (and half-cousin of Charles Darwin) Francis Galton, in the 1860s. “Eugenics” comes from the Greek “eu” meaning “good”, and “genos” meaning “birth”.

18. Old Testament book before Neh. : EZR
In the Hebrew Bible the Book of Ezra was originally combined with the Book of Nehemiah, with the two being separated in the early days of the Christian Era.

21. Some HDTVs : RCAS
In the digital world, resolution of a display, television, image etc. is defined by the number of pixels that can be displayed in a standard area (say a square inch). The emphasis today is on producing larger area displays/televisions, i.e increasing the number of pixels simply by increasing the size of the screen. In the past couple of decades the emphasis was on adding more pixels within the same screen size to increase resolution. That would just be wasted effort these days as further increases in resolution cannot be perceived by the eye. Now that TV’s are capable of displaying such high resolutions, broadcasters are responding by producing a video signal of “higher resolution”, that they call high-definition television, HDTV.

33. Winter cry in New York : GO RANGERS
The New York Rangers is an NHL team, one of the oldest in the league, having joined in 1926. When the Rangers won the Stanley Cup in 1928, they became the first American team to do so.

38. Stoker who wrote “Dracula” : BRAM
“Dracula” is a novel written by the Irish author Bram Stoker, and first published in 1897. Dracula wasn’t the first vampire of literature, but he certainly was the one who spawned the popularity of vampires in theater, film and television, and indeed more novels. Personally, I can’t stand vampire fiction …

39. “Hooked on Classics” company : K-TEL
K-Tel was founded in 1962 in Winnipeg, Manitoba by one Philip Kives. The company’s recipe for success was the sale of inexpensive goods with a simple sales pitch and mail-order distribution.

50. Fictional maker of earthquake pills and elephant bullets : ACME CORPORATION
The Acme Corporation is a fictional company used mainly by Looney Tunes, and within the Looney Tunes empire it was used mostly in the “Road Runner” cartoons. Wile E. Coyote was always receiving a new piece of gear from Acme designed to finally capture the Road Runner, but the equipment always led to his downfall instead.

Down
2. “The People and Its Leaders” muralist : OROZCO
José Clemente Orozco was a Mexican painter famous for his themed murals, often promoting the causes of peasants and workers. His most famous mural is probably a fresco painted in the Library of Dartmouth College, called “The Epic of American Civilization”.

4. Amsterdam-based financial giant : ING
ING is a huge, Dutch banking institution, created via a merger in 1991. The company headquarters is in a spectacular building in Amsterdam called simply ING House. ING stands for Internationale Nederlanden Groep.

6. It means nothing : LOVE
In tennis the score of zero is designated as “love”. Some people believe that this usage originates from the French “l’oeuf” (the egg). The idea is that a “0” looks like an egg.

7. De Matteo of “The Sopranos” : DREA
Drea de Matteo is an actress who is most familiar to me for playing Adriana la Cerva on HBO’s wonderful series “The Sopranos”. She also played Joey’s sister on the short-lived “Friends” spin-off called “Joey”, and the character Angie Bolen on “Desperate Housewives”.

9. Korean War leader : RHEE
Syngman Rhee was born in Korea, but received much of his education in the US, including a Ph.D. from Princeton. The very much westernized Rhee returned to Korea in 1910, a Korea that by then had been annexed by Japan. Soon after he found himself President of a Provisional Government of Korea based in Shanghai, but was eventually ousted for misuse of power. After WWII, Rhee was installed as President, heavily backed by the United States. However, Rhee’s rule proved to be more like tyranny, and during the Korean War his relationship with the US Government became very strained. He stayed in power until 1960 when student revolts became popular enough to force him out of office. The CIA flew him out of the country and he went into exile in Hawaii, where a few years later he died of a stroke.

10. Filling yarn : WEFT
When cloth is woven, yarn is drawn back and forth horizontally through vertical yarns called warps. The horizontal yarn is known as the weft or woof.

11. “Look at me, ___ helpless …” (first words of “Misty”) : I’M AS
“Misty” was written in 1954 by one Erroll Garner. Johnny Mathis had a hit with it five years later, and it was to become his signature tune. The song of course features prominently in the 1971 Clint Eastwood thriller called “Play Misty for Me”.

13. How Ginger Rogers danced : IN HEELS
I am a huge Ginger Rogers fan. She is famous as the on-screen and dancing partner of Fred Astaire. However, my favorite films were those romantic comedies she made later in her career, especially “The Major and the Minor” and “Monkey Business”.

15. “Discobolus” sculptor : MYRON
Myron was a Greek sculptor active in the middle of the fifth century BC. His most famous works are bronzes, of very fit, able-bodied athletes.

22. New York’s ___ Building, designed by Mies van der Rohe : SEAGRAM
The Seagram Building in New York City was designed by Ludwig Miles van der Rohe, and completed in 1958. The architect wanted the building to have a very uniform appearance, and even specified that window blinds couldn’t be left drawn in different positions. The original building blinds only operated in the open, closed or half-open positions.

23. Crazy way to go? : BERSERK
Our word “berserk” meaning “deranged” comes from the “Berserkers”, Norse warriors described in Old Norse literature. Berserkers were renowned for going into battle in a fury, and some believe that they consumed drugged food to get themselves worked up for the fighting ahead.

25. Jerry in the Basketball Hall of Fame : SLOAN
Jerry Sloan is a former NBA player and head coach. He is the only coach in NBA history to reach 1,000 wins with the same club, and that team was the Utah Jazz.

26. Polo and others : TERIS
Teri Polo’s most prominent role on the big screen was Pam Focker in “Meet the Fockers” and its sequel. Pam is the wife of the character played by Ben Stiller.

30. Echo, e.g. : OREAD
In Greek mythology, Echo is one of the Oreads, the mountain nymphs. She fell in love with the vain Narcissus, and followed him into the forest one day. Narcissus heard her following him, and called out, “Who’s there?”. Echo answered, “Who’s there?” Again he called out, and again Echo echoed his words back to him. Get the gist?

34. Some rodeo bulls : BRAHMAS
The Brahma breed of cattle comes from India, and now is found all over the world. The breed is named for the sacred cow in the Hindu tradition.

37. Boil down : DECOCT
Decoction is the process of extracting dissolved chemicals by boiling. When one makes something like a vegetable stock in the kitchen, the boiling process used is “decoction”.

38. Some idols : BA’ALS
Ba’al can actually refer to any god, and sometimes even human officials as it can also be used as an honorific title. Ba’al can also be known as Hada, a god of the rain, thunder, agriculture and fertility.

40. Heat divisions : LANES
In competitive meets, there are heats, which are run in lanes.

Molière was the stage name of French actor and playwright Jean-Baptiste Poquelin. It is amazing how well the comedies of Molière, written in the 1600s, entertain us on stage today. Among his best known plays are “The Misanthrope”, “The School for Wives and “Tartuffe or the Hypocrite”.

43. Abram of “This Old House” : NORM
Norm Abram is the master carpenter who appeared on the PBS show “This Old House”, and who later starred in the spinoff series called “The New Yankee Workshop”.

45. Res ___ Ioquitur : IPSA
The literal translation of the legal term “res ipsa loquitur” is “the thing speaks for itself”. It refers to situations when there is an injury, and the nature of the injury is such that one can assume that negligence had to have taken place.

47. ___ Minor : URSA
Ursa Minor sits right beside the constellation Draco (Latin for “dragon”). Ursa Minor used to be considered the wing of Draco, and so was once called “Dragon’s Wing”.

51. Wilfred Owen poem “Dulce et Decorum ___” : EST
Wilfred Owen was an English soldier and noted poet, famous for writing realistic poetry about the tragedies of trench warfare during WWI. Owen was killed in action only one week before the war ended, so most of his work was published posthumously.

52. Scotland’s longest river : TAY
The Firth of Tay is an inlet on the east coast of Scotland, into which empties Scotland’s largest river, the Tay. The city of Dundee lies on the Firth, and the city of Perth just inland on the Tay.