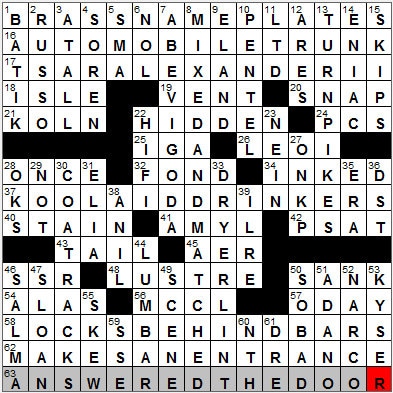 
Today’s Wiki-est, Amazonian Googlies
Across
17. Assassinated leader called “the Liberator” : TSAR ALEXANDER II
Tsar Alexander II ruled the Russian Empire from 1855. He lived in dangerous times. There was an attempt on his life in St. Petersburg in 1866, and then another in 1879. Later in 1879 someone exploded a bomb intended for the tsar’s train, but missed. In 1880 another explosion, this time in a Winter Palace dining room, killed eleven people but missed Alexander. Finally, in 1881 after a bomb exploded under the tsar’s bulletproof carriage, he emerged unharmed but then a second bomb was thrown and exploded at Alexander’s feet, killing him instantly.

25. Supermarket chain : IGA
IGA stands for Independent Grocers Alliance, a chain of supermarkets that extends right around the world. IGA’s headquarters is in Chicago.

26. Predecessor of Pope Hilarius : LEO I
The first pope named Leo is now known as Pope Saint Leo the Great. He is famous for meeting with the feared Attila the Hun and persuading him to turn back his invading force that was threatening to overrun Western Europe.

Pope Saint Hilarius (also Hilary) was head of the Roman Catholic Church from 461 to 468.

37. Unquestioning adherents : KOOL-AID DRINKERS
The drink we know today as Kool-Aid was invented by Edward Perkins and his wife, in Perkins’ mother’s kitchen in southwest Nebraska. Kool-Aid is now the Official Soft Drink of the state.

“Drinking the Kool-Aid” is an expression meaning acceptance of a philosophy or argument blindly, without question. The expression refers to the Jonestown Massacre of 1978, during which members of the Peoples Temple drank Kool-Aid that contained cyanide, in a mass suicide. In actual fact, the drink wasn’t Kool-Aid, but a similar drink mix called Flavor Aid.

41. ___ nitrite : AMYL
Amyl nitrite is intended for use as a vasodilator, but it is also psychoactive when inhaled, so it has been abused as a recreational drug.

45. ___ Lingus : AER
Aer Lingus is my favorite airline! Well, the service isn’t great, but when I get on board an Aer Lingus plane I feel like I am back in Ireland. Aer Lingus is the national airline of Ireland, with Aer Lingus being a phonetic spelling of the Irish “aer-loingeas” meaning “air fleet”. These days Aer Lingus can only lay claim to the title of Ireland’s oldest airline as it’s no longer the biggest. That honor goes to the controversial budget airline, Ryan Air.

46. Old political inits. : SSR
The former Soviet Union was created in 1922, not long after the Russian Revolution that overthrew the Tsar in 1917. Geographically, the new Soviet Union was roughly equivalent to the old Russian Empire, and was made up of fifteen Soviet Socialist Republics.

Down
1. Certain fabric worker’s work : BATIK
Genuine batik is produced by applying wax to the parts of the cloth that are not to be dyed. After the cloth has been dyed, it is dried and then dipped into a solvent that dissolves the wax.

2. Richard ___, 2002 Pulitzer winner for the novel “Empire Falls” : RUSSO
Richard Russo’s 2001 novel titled “Empire Falls” won the Pullitzer Prize for Fiction the following year. The novel was adapted into a television miniseries by HBO that was aired in 2005.

4. Existentialist Kierkegaard : SOREN
Soren Kierkegaard was a Danish philosopher and theologian, and I never really understood anything I’ve read about him!

The famous Robert Burns poem, “To a Mouse” describes the little creature as a “wee, sleekit, cow’rin, tim’rous beastie”. There’s another oft-quoted line later in the poem, “The best-laid schemes o’ mice an’ men, gang aft agley.” John Steinbeck used this as inspiration for the title of his 1937 novel “Of Mice and Men”.

6. ___-pros : NOL
“Nolle prosequi” is a Latin phrase that translates literally as “to be unwilling” (nolle) “to pursue” (prosequi). In the arena of law, a declaration of nolle prosequi (shortened to nol. pros.) by a plaintiff or prosecutor is a declaration that all or part of the case will be dropped.

7. Grandpa player in “Look Who’s Talking,” 1989 : ABE VIGODA
Abe Vigoda played Detective Sergeant Phil Fish in television’s “Barney Miller” in the seventies, and even got his own spin-off show called “Fish”. On the big screen he played Sal Tessio in “The Godfather” and Grandpa Ubriacco in “Look Who’s Talking”.

9. Savanna grazer : ELAND
An eland is a large African antelope, in fact the largest on the continent.

A savanna (also savannah) is a grassland. If there are any trees in the area, by definition they are small and widely spaced so that light can get to the grasses, which can grow unhindered.

11. The Taurus replaced it : LTD
There has been a lot of speculation about what the acronym LTD stands for in the car model known as “Ford LTD”. Many say it stands for Luxury Trim Decor, and others that it is an abbreviation for “limited”. Although the car was produced in Australia with the acronym meaning Lincoln Type Design, it seems LTD was originally chosen as just three meaningless letters that sound well together.

13. Parts of some pay-as-you-go plans? : TURNPIKES
Back in the 15th century a “turnpike” was a defensive barrier across a road. By the 17th century the term was used for a barrier that stopped travellers until a toll was paid. By the 18th century a turnpike was the name given to a road with a toll.

14. “Giant Brain” of the 1940s : ENIAC
The acronym ENIAC stands for Electronic Numerical Integrator and Calculator (although many folks insist that the C was for “Computer”). ENIAC was the first general-purpose electronic computer. It was designed to calculate artillery firing tables, but it ended up being used early on to make calculations necessary for the development of the hydrogen bomb. Given its uses, it’s not surprising to hear that development of ENIAC was funded by the US Army during WWII.

27. Cleaning the mess? : ON KP
KP is a US military slang term, and stands for either “kitchen police” or “kitchen patrol”.

31. “Dream-Children” author, 1822 : ELIA
The “Essays of Elia” began appearing in “London Magazine” in 1820, and were immediate hits with the public. The author was Charles Lamb, and “Elia” was actually a clerk with whom Lamb worked. The most famous of the essays in the collection are probably “Dream-Children” and “Old China”.

36. Reason for a late shift?: Abbr. : DST
On the other side of the Atlantic, Daylight Saving Time (DST) is known as “summer time”. The idea behind summer/daylight-savings is to move clocks forward an hour in spring and backwards in the fall, so that afternoons have more daylight.

38. Plant in the pea family : ANIL
Anil is another name for the indigo plant, as well as the name for the blue indigo dye that is obtained from it. And that blue is relatively close to “navy” blue.

39. “___ Pastore” (Mozart opera) : IL RE
“Il re pastore” is an opera seria by Wolfgang Amadeus Mozart. The title translates into “The Shepherd King”. Mozart wrote the whole thing in six weeks.

46. Hayek of Hollywood : SALMA
Salma Hayek is a Mexican actress, the first Mexican national to be nominated for a Best Actress Oscar, for her portrayal of painter Frida Kahlo in the 2002 movie “Frida”.

47. Hoops Hall-of-Famer Jerry : SLOAN
Jerry Sloan is a former NBA player and head coach. He is the only coach in NBA history to reach 1,000 wins with the same club, and that team was the Utah Jazz.

51. Fictional Sicilian town in a 1944 novel : ADANO
“A Bell for Adano” is a novel written by John Hersey, about an Italian-American US Army officer, Major Joppolo, who found a replacement for the town’s bell stolen by the fascists. It was made into a film in 1945, the same year the novel won a Pulitzer.

52. Member of a crack team? : NARCO
Crack cocaine is manufactured from powdered cocaine in a simple process. The powder is dissolved in an aqueous solution of baking soda, and the liquid is boiled off leaving a solid residue. The residue is broken up into chunks, and sold as crack. Apparently the crack is smoked, delivering an awful lot of cocaine into the body very quickly though the lungs. Nasty stuff …

53. Bandleader with the hit “Three Little Fishies” : KYSER
Kay Kyser was popular bandleader in the thirties and forties.

Dr. Dre is the stage name of rapper Andre Romelle Young. He is perhaps as well known for his own singing career as he is for producing records and starting the careers of others such Snoop Dog, Eminem and 50 Cent.

Eminem‘s real name is Marshall Mathers, a native of Saint Joseph, Missouri. He grew up poor, raised by a single-mom as the family was abandoned by his father when he was 18 months old. Marshall and his mother moved around the country before settling in a suburb of Detroit. He didn’t do well at school, and dropped out at the age of 17. But, in the end, he made it pretty big …