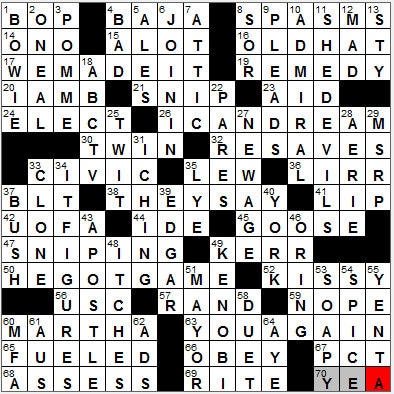 
Today’s Wiki-est, Amazonian Googlies
1. Some jazz : BOP
“Bop” is a shortened form of “bebop”, a jazz style that dates back to the early 1940s.

14. Singer with a negative-sounding name : ONO
Yoko Ono was born into a prosperous Japanese family, and is actually a descendant of one of the emperors of Japan. Her father moved around the world for work, and she lived the first few years of her life in San Francisco. The family returned to Japan, before moving on to New York, Hanoi and back to Japan just before WWII, in time to live through the great fire-bombing of Tokyo in 1945. Immediately after the war the family was far from prosperous. While Yoko’s father was being held in a prison camp in Vietnam, her mother had to resort to begging and bartering to feed her children. When her father was repatriated, life started to return to normal and Yoko was able to attend university. She was the first woman to be accepted into the philosophy program of Gakushuin University.

35. Basketball’s Alcindor : LEW
Kareem Abdul-Jabbar’s name at birth was Ferdinand Lewis Alcindor. He changed his name when he converted to Islam.

37. Sandwich shop staple, in brief : BLT
The BLT (bacon, lettuce and tomato) is the second most popular sandwich in the US, after the plain old ham sandwich.

42. Fayetteville campus, briefly : U OF A
The University of Arkansas is located in Fayetteville. It was founded in 1871 as the Arkansas Industrial University.

49. “The King and I” actress : KERR
The lovely Deborah Kerr was a Scottish actress who made a real name for herself on the American stage and in Hollywood movies. Despite all her success, and six nominations for a Best Actress Oscar, she never actually won an Academy Award. In 1967 she appeared in the James Bond film “Casino Royale” at the age of 46, the oldest Bond Girl of all time.

50. 1998 Spike Lee joint : HE GOT GAME
“He Got Game” is a movie written and directed by Spike Lee, released in 1998. It is a sports drama about a high school basketball player, with a father in prison played by Denzel Washington.

56. Trojan’s sch. : USC
The athletic teams of the University of Southern California are called the USC Trojans. The women’s teams are also called the Trojans, but are sometimes referred to as Women of Troy.

57. South African money : RAND
The Rand is the currency of South Africa. Much of South Africa’s famed gold comes from mines around Johannesburg in the Witwatersrand (Afrikaans for “the ridge of white waters”). The Rand currency takes its name from this ridge.

60. Popular daytime talk show : MARTHA
“Martha” is a weekday talk show hosted by Martha Stewart. If you want to see it, it’s on the Hallmark Channel.

70. “___, though I walk …” : YEA
Psalm 23 from the Hebrew Bible or Old Testament is oft quoted even without its religious context. One version of the full text of verse 4 is:

Yea, though I walk through the valley of the shadow of death, I will fear no evil: for thou art with me; thy rod and thy staff they comfort me.

Down
1. David who sang “Let’s Dance” : BOWIE
David Bowie’s great hit “Let’s Dance” was released in 1983, his only record to make it to number one on both sides of the Atlantic.

Actor Ryan O’Neal got his big break in the sixties on television. He appeared in the prime-time soap opera “Peyton Place”, opposite fellow newcomer Mia Farrow. Then in 1970 he landed a starring role in the hit movie “Love Story”, which established him in Hollywood.

Tatum O’Neal was the youngest actress to win a “competitive” Oscar. She won the Best Supporting Actress Award in 1974 when she was just 10, for her role in “Paper Moon”. The youngest person to win an Academy Award was Shirley Temple, who was only 5 years old when she was given an honorary Oscar in 1934.

5. Drinks for Chaucer’s Miller : ALES
Geoffrey Chaucer was an English author. He is often referred to as the father of English literature because he established vernacular English as a legitimate language for artistic works, as up to that point authors used French or Latin. Chaucer’s most famous work is actually unfinished, a collection of stories called “The Canterbury Tales”, all written at the end of the 14th century.

18. “Dancing With the Stars” airer : ABC TV
When I was growing up in the British Isles, there was a surprisingly popular BBC television show featuring professional ballroom dancing called “Come Dancing”. It ran almost every year from 1949 to 1998, and in 2004 the BBC resurrected it with a new twist, adding celebrities to dance with the professionals. The new show, “Strictly Come Dancing” is a huge success, and has become a worldwide franchise. Over here we watch the American spin-off called “Dancing with the Stars”. It really is fun television …

27. Like Enya’s music : NEW AGE
The New Age Movement is a western philosophy with roots that date back to the early 1800s. The movement focuses on achieving the highest human potential as an individual and embraces many traditionally eastern spiritual practices, but eschews all religious doctrines. New Age music is composed with the intent of supporting this philosophy. It tends to be very minimalistic, very tonal and harmonic. It is often used as a backdrop for relaxation or meditation.

Enya’s real name is Eithne Patricia Ní Bhraonáin, which can translate from the Irish into Enya Brennan. Her Donegal family (in the northwest of Ireland) formed a band called Clannad, which included Enya. In 1980 Enya launched her very successful solo career. She sure does turn up a lot in crosswords!

31. Ancient Chinese divination book : I CHING
The “I Ching” is an ancient Chinese text dating back to the 2nd millennium BC. The text deals with aspects of cosmology and divination, and perhaps served as a guide for making predictions of the future.

35. Caustic substance : LYE
When we purchase what is labelled as “lye” today, it is caustic soda (sodium hydroxide). To clean out drains we might buy Crystal Drano which is sodium hydroxide (lye) mixed with sodium nitrate, sodium chloride (table salt) and aluminum. The contents of Drano work in concert to clear the clog. The lye reacts with any fats creating soap which may be enough to break up the clog. Also, the finely divided aluminum reacts with water creating tremendous heat so that that mixture boils and churns, then any hair or fibers are cut by the sharp edges of the nitrate and chloride crystals. Having said all that, I find that boiling water poured down the drain almost always does the job …

37. Outback : BUSH
In Australia, the land outside of urban area is referred to as “the outback” or “the bush”. Although, I think that “outback” can also be used for the more remote parts of the bush.

40. Part of N.Y.S.E. : YORK
The roots of the New York Stock Exchange (NYSE) go back to 1792 when a group of 24 stock brokers set up the New York Stock & Exchange Board. They did so in an agreement signed under a buttonwood tree outside 68 Wall Street. That document became known as the Buttonwood Agreement.

49. Obi-Wan ___ : KENOBI
Obi-Wan Kenobi is one of the more beloved of the “Star Wars” characters. Kenobi was portrayed by two fabulous actors in the series of films. As a young man he is played by Scottish actor Ewan McGregor, and as an older man he is played by Alec Guinness.

51. One called “hizzoner” : MAYOR
“Hizzoner” is a derivative from “his honor” that has been around since the late 19th century.

55. Dirt spreader : YENTA
Yenta (Yente) is actually a female Yiddish name. In Yiddish theater it came to mean a busybody.

61. Switz. neighbor : AUS
The name “Austria” is a Latin variant of the German name for the country, “Österreich”. “Österreich” itself means “Eastern borderlands”, a reference to the country’s history as a prefecture of neighboring Bavaria.