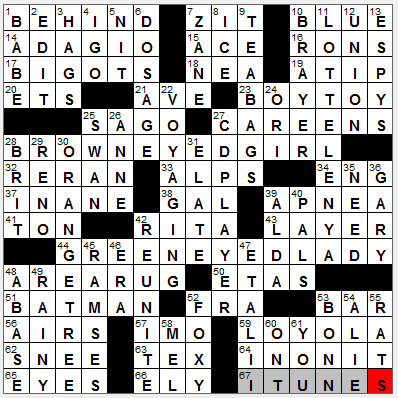 CROSSWORD SETTER: Peter A. Collins
THEME: Eye Tunes … all of the theme answers are songs containing the word “eye”:


Today’s Wiki-est, Amazonian Googlies
Across
1. With 10- and 65-Across, 1971 hit by the Who : BEHIND
(10. See 1-Across : BLUE)
(65. See 1-Across : EYES)
You might be aware that the theme songs used by the three “CSI” television shows are numbers written and performed by The Who. The first choice for the “CSI: NY” theme was “Behind Blue Eyes”, but this was changed at the last minute to “Baba O’Riley”.

The Who’s hit “Who Are You” is used as the theme song for the TV show “CSI”. Old hits from the Who are also used as theme songs for the CSI spin-off shows, “CSI: New York” (theme: “Baba O’Riley”) and “CSI: Miami” (theme: “Won’t Get Fooled Again”).

14. Slowly, on a musical score : ADAGIO
An adagio is a piece of music with a slow tempo. The “adagio” marking on the score is an instruction to play the piece slowly and in a stately manner. The word adagio is Latin for “at ease”.

16. Hollywood’s Howard and Perlman : RONS
Ron Howard sure has come a long way since playing Opie on “The Andy Griffith Show”. He has directed some fabulous movies, including favorites of mine like “Apollo 13”, “A Beautiful Mind” and “The Da Vinci Code”. And today, Opie is a grandfather …

Ron Perlman is a Hollywood actor noted for playing roles that require heavy make-up, as well as for voice-over work.

21. Pennsylvania ___ (White House locale: Abbr.) : AVE
Pennsylvania Avenue in Washington, D.C. is sometimes called “America’s Main Street”, as it runs between the White House and the US Capitol. The exact reason why this important thoroughfare was given the name “Pennsylvania” seems to be unclear. One favored theory though is that it was a gesture to the state of Pennsylvania for moving the country’s capital from Philadelphia.

25. ___ palm : SAGO
When I was growing up in Ireland I was very familiar with pearl sago, which is similar to pearl tapioca. Pearls of sago are simply little balls of sago starch used to make breads, pancakes, biscuits, or the steamed puddings that we ate as kids. Sago comes from pith of the sago palm tree. To get at the starch the tree has to be cut down and the trunk split to reveal the pith. The pith is crushed and manipulated to make the starch available, which is then washed out of a fibrous suspension. One sago palm tree yields about 150-300 kg of starch. Personally I love the stuff, but then, I am a bit weird …

27. Turns at high speed : CAREENS
“Careen” dates back to 1590 when it meant “to turn a ship on its side, exposing the keel”. The word evolved from the Middle French word “carene” meaning “keel”. Our modern usage, meaning to lean or tilt, only dates back as far as the 1880s. Careen should not be confused with “career”, a verb meaning to move rapidly. One has to “career” from side-to -side in order to “careen”.

28. 1967 hit by Van Morrison : BROWN EYED GIRL
Van Morrison’s “Brown Eyed Girl” is one of my favorite songs of all time. I’ll bet it is one of Morrison’s favorites too, as it was his first big hit as a solo artist, back in 1967.

34. Where London is: Abbr. : ENG
London is the largest metropolitan area in the whole of the European Union (and one of my favorite cities in the world). London has been a major settlement for over 2,000 years and was founded as a town by the Romans who called it Londinium. The name “Londinium” may have existed prior to the arrival of the Romans, and no one seems too sure of its origins. Famously, the City of London is a one-square-mile area at the center of the metropolis, the area that marked old medieval London. “The City”, as it is commonly called, has its own Mayor of the City of London (the Mayor of London is someone else), and it’s own City of London Police Force (the London Metropolitan Police are the police we usually see on the street as tourist, a different force).

39. Sleep problem : APNEA
Sleep apnea can be caused by an obstruction in the airways, possibly due to obesity or enlarged tonsils.

44. 1970 hit by Sugarloaf : GREEN-EYED LADY
Sugarloaf was a rock and roll band from Denver, Colorado that was active in the seventies. Their two big hits were “Green-Eyed Lady” and “Don’t Call Us, We’ll Call You”.

50. Greek H’s : ETAS
Eta is the seventh letter of the Greek alphabet, and is a forerunner of our Latin character “H”.

51. Who said “The joke’s on you, Riddler!” : BATMAN
Batman is unique among his superhero compatriots in that he has no special powers, just a whole load of cool gadgets.

52. ___ diavolo (spicy sauce) : FRA
Fra diavolo is a spicy sauce used for pasta and seafood, usually made with chili peppers in a tomato base. The name “Fra diavolo” translates to “Brother devil”. The sauce may be named for the Italian revolutionary Michele Pezza who was also known as Fra Diavolo.

53. Legal profession : BAR
The legal profession is referred to as “the bar”. The term arose in medieval times when European courtrooms were divided into two with “barring” furniture, basically a wooden rail that separated the public from the participants in the trial.

59. Chicago university : LOYOLA
Loyola University in Chicago was founded in 1870 by the Society of Jesus, originally as St. Ignatius College. It is now the largest Jesuit school in the whole country.

62. Old dagger : SNEE
“Snick or snee” is the name given to cut and thrust while fighting with a knife. The phrase is rooted in a pair of Dutch words, and it gave its name to a “snee”, a light sword-like knife.

66. Cathedral town near Cambridge : ELY
Ely Cathedral is a famous and beautiful church in the city of Ely in the county of Cambridgeshire. There is a Gothic door on the north face of the cathedral that was designed by Sir Christopher Wren, the man famous as the architect of St. Paul’s Cathedral in London. Christopher Wren had a personal link to the church, as his uncle was the Bishop of Ely.

67. Where to find the songs in this grid … or an appropriate title for this puzzle? : ITUNES
iTunes is a very, very successful software application from Apple. It’s basically a media player that works on platforms like the iPad, iPhone and iPod. Of course it connects seamlessly to the iTunes store, where you can spend all kinds of money.

Down
1. Jesus in the manger, e.g. : BABE
A manger is an open box in which feed is placed for livestock. The term comes from the French word “manger” meaning “to eat”.

7. Western writer Grey : ZANE
Zane Grey sure did hit on the right niche. He wrote romanticized western novels and stories that really lent themselves to the big screen in the days when westerns were very popular movies. Incredibly, 110 films were made based on his work.

9. Packets from Twinings of London, e.g. : TEABAGS
Thomas Twining started a “tea room” in the Strand in London way back in 1706, the first known tea room in the world. That tea shop is still operating today, and Twinings is now a very famous brand of tea.

11. Actress married to Kurt Weill : LOTTE LENYA
Lotte Lenya was an Austrian singer and actress. She was married to composer Kurt Weill, and was noted for her performances of his works. Late in her career she played Rosa Klebb, one of the main villains in the 1963 Bond movie “From Russia With Love”.

12. The “U” of U.S.S.R. : UNION
The former Soviet Union was created in 1922, not long after the Russian Revolution of 1917 that overthrew the Tsar. The new Soviet Union was roughly equivalent geographically to the old Russian Empire, and was comprised of fifteen Soviet Socialist Republics.

13. TV sports awards : ESPYS
The ESPY Awards are a creation of the ESPN sports television network. One difference with similarly named awards in the entertainment industry is that ESPY winners are chosen solely based on viewer votes.

26. One of two wives of Henry VIII : ANNE
Famously, King Henry VIII had six queens consort. There is a rhyme that is commonly used to help remember the fates of each of his wives, which goes:

King Henry the Eighth, to six wives he was wedded. One died, one survived, two divorced, two beheaded.

The use of the term “divorce” isn’t quite accurate though, as in fact he had two of his marriages annulled. His wives (and their fates) were:

29. Gambling mecca : RENO
Reno, Nevada was named in honor of Major General Jesse Lee Reno, a Union officer killed in the Civil War. The city has a famous “Reno Arch”, a structure that stands over the main street, erected in 1926 to promote an exposition planned for the following year. After the expo, the city council decided to keep the arch and held a competition to decide what wording should be displayed, and the winner was “The Biggest Little City in the World”.

36. Indiana city on Lake Michigan : GARY
The city of Gary, Indiana is located just 25 miles from downtown Chicago and falls within the Chicago metropolitan area (also known as Chicagoland). Gary was founded by US Steel in 1906, as the company selected it as the site for a new steel plant. The name was chose in honor of Elbert H. Gary who was the key player in setting up US Steel in 1901.

39. “M*A*S*H” star : ALDA
Alan Alda won Emmys for directing, acting and writing in “M*A*S*H”. He played Hawkeye Pierce on the show, the character played by Donald Sutherland in the movie.

Alan Alda had a great television career, but when it comes to the big screen my favorite of his movies is the 1978 romantic comedy “Same Time, Next Year” in which he starred opposite Ellen Burstyn.

45. One of 11 Egyptian pharaohs : RAMSES
Ramesses (also Ramses) was the name taken by eleven of the Egytian pharoahs. Ramesses translates as “Born of the sun-god Ra”.

47. Latin list ender : ET ALII
Et alii (et al.) is the equivalent of et cetera (etc.), with et cetera being used in place of a list of objects, and et alii used for a list of names. In fact “et al.” can stand for et alii (for a group of males, or males and females), aliae (for a group of women) and et alia (applies to neuter nouns, but can be used for a group of people where the intent is to retain gender-neutrality).

54. “I cannot tell ___” : A LIE
The famous story about George Washington cutting down a cherry tree as a child has been shown to be fiction. He supposedly was confronted by his father after taking an axe to a tree and confessed with the words, “I’m sorry father, I cannot tell a lie”.

58. Funnyman Brooks : MEL
Mel Brooks’ real name is Melvin Kaminsky. He is quite the entertainer, isn’t he? He is one of very few entertainers (there are only ten) who has won the “Showbiz Award Grand Slam” i.e. an Oscar, Tony, Grammy and Emmy. He is in good company, as the list also includes the likes of Richard Rogers, Sir John Geilgud, Marvin Hamlisch and Audrey Hepburn.

60. Province next to Que. : ONT
The Canadian province of Ontario takes its name from the Great Lake. In turn, Lake Ontario’s name is thought to be derived from “Ontari:io”, a Huron word meaning “great lake”. Ontario is home to the nation’s capital, Ottawa, as well as Toronto, Canada’s most populous city (and capital of the province).

61. Whom Uncle Sam wants : YOU
The Uncle Sam personification of the United States was first used during the War of 1812. The “Uncle Sam” term was so widely accepted that even the Germans used it during WWII, choosing the codeword “Samland” to mean “America” in intelligence communiques.