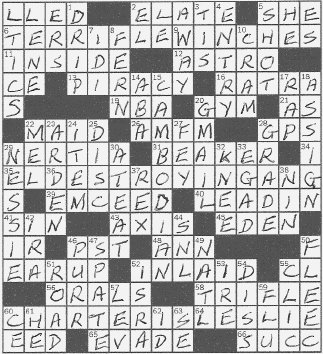 CROSSWORD SETTER: Patrick Berry
There’s a note with today’s puzzle!
“CROSS” WORD CONTEST — All the puzzles this week, from Monday to Saturday, have been created by one person, Patrick Berry. Have your solutions handy, because the Saturday puzzle conceals a meta-challenge involving the solution grids of all six. When you have the answer to the meta-challenge, mail it to: crossword@nytimes.com. Twenty-five correct solvers, chosen at random, whose entries are received by 6:00 p.m. E.T. Sunday, Oct. 23, will receive copies of “Will Shortz Picks His Favorite Puzzles: 101 of the Top Crosswords From The New York Times.” Only one entry per person, please. The answer and winners’ names will appear on Friday, Oct. 28, at Wordplay.
THEME: Wrap Around … each of the three 15-letter answers applies to two clues. For one of this pair of clues, the answer actually starts somewhere in the middle and “wraps around” to the other side. Also, many other answers wrap around from the right to the left of the grid, and from the bottom of the grid back up to the top:


Today’s Wiki-est, Amazonian Googlies
Across
6. Country singer Gibbs glided a short distance? : TERRI FLEW INCHES
Terri Gibbs is a country music singer. She had thirteen singles that made the Billboard country singles charts in the eighties. Gibbs was born blind.

9. Old West gun, crossing over? : WINCHESTER RIFLE
The Winchester rifle was one of the first repeating rifles to be manufactured in volume. The Winchester repeater is known as “The Gun that Won the West”.

20. Where somebody might be spotted : GYM
People at the gym who are doing weight training will often “spot” for each other. This means that the person who is spotting assists in the lift, allowing the “lifter” to work with more weight than usual.

28. Trip director, for short : GPS
GPS stands for Global Positioning System. The modern GPS system that we use today was built by the military who received the massive funding needed because of fears during the Cold War of the use of Intercontinental Ballistic Missiles. We civilians, all round the world, owe a lot to President Ronald Reagan because he directed the military to make GPS available to the public for the common good. He was moved to do so after the Soviet Union shot down KAL flight 007 carrying 269 people, just because it accidentally strayed into Soviet airspace.

35. Cowboy Rogers as part of a posse after some younger namesakes joined up? : ELDEST ROY IN GANG
Cowboy actor and singer Roy Rogers’ real name was Leonard Franklin Slye. His nickname was “King of the Cowboys”. Roy Rogers married Dale Evans in 1947. Dale’s nickname was “Queen of the West”.

36. Poisonous gilled mushrooms, crossing over? : DESTROYING ANGEL
Destroying angel is the name given to several species of mushroom, all of which are poisonous.

39. Like a roast : EMCEED
Emcee: meaning “MC”, the Master or Mistress of Ceremonies.

45. Prelapsarian home : EDEN
Anything “prelapsarian” is related to the period before the fall of Adam and Eve, before they “lapsed”.

46. L.A. winter hrs. : PST
On the other side of the Atlantic, Daylight Saving Time (DST) is known as “summer time”. The idea behind summer/daylight-savings is to move clocks forward an hour in spring and backwards in the fall, so that afternoons have more daylight.

64. Simon Templar’s creator, crossing over? : LESLIE CHARTERIS
Simon Templar is a very cool character in “The Saint” series of books written by British author Leslie Charteris. “The Saint” was adapted into a famous UK television series in the sixties, with Roger Moore in the title role.

Down
7. First name in despotism : IDI
Idi Amin received most of his military training in the British armed forces, eventually achieving the highest rank possible for a Black African in the British Colonial Army in 1959, that of Warrant Officer. On his return to Uganda he joined the military and quickly rose to the rank of Deputy Commander of the Army. During that time he was quite the athlete. He was a noted rugby player and swimmer, and for nine years held the Ugandan national light-heavyweight boxing title. By the early seventies Amin was commander of all the armed forces of Uganda, and in 1971 seized power in a military coup, displacing the country’s president Milton Obote. There followed seven years of brutal rule by Amin during which it is estimated that between 100,000 and 500,000 people were murdered. Amin was ousted from power in 1979 after a war with Tanzania, and fled to Libya where he stayed for a year. He then moved to Saudi Arabia, where he was financially supported by the Saudi Royal Family for the remainder of his life. He died in 2003.

8. Plant with fiddleheads : FERN
Fiddleheads are those furled fronds that you often see on young ferns. They can be harvested and served as a vegetable.

15. Language in which “yes” and “no” are “baat” and “te,” respectively : CAMBODIAN
The Cambodian language is also known as “Khmer”.

20. Free Web-based correspondence service : GMAIL
Gmail is a free webmail service provided by Google, and my favorite of the free email services. Gmail made a big splash when it was introduced because it offered a whopping 1GB of storage whereas other services offered a measly 2-4MB on average.

25. Piece in the game Othello : DISC
The game of Reversi is also sold as Othello. The name Othello was chosen as a nod to the play by William Shakespeare.

27. Whimsically odd : FEY
“Fey” is such a lovely word, meaning magical or fairylike. It comes from the Middle English word “feie” which has a less pleasant definition, “fated to die”.

37. 1976 Broadway musical based on Henry VIII’s life : REX
The musical “Rex” is based on the life of King Henry VIII. It opened on Broadway in April 1976, and closed a month and a half later. The music for the show was composed by Richard Rodgers, making “Rex” one of the very few flops penned by Rodgers.

38. “Henry & June” author : NIN
Anaïs Nin was a French author, famous for her journals that she wrote for over sixty years from the age of 11 right up to her death. She also wrote highly-regarded erotica, and cited D. H. Lawrence as someone from whom she drew inspiration.

The 1990 movie “Henry & June” is loosely adapted from the book of the same name by Anaïs Nin. The book is based on diaries written by Nin telling of her part in a love triangle with American author Henry Miller and his wife June, played by Uma Thurman in the movie.

42. Banker’s recommendation, for short : IRA
I have to tell you, when I first came to the US from Ireland it was pretty confusing seeing big signs along the freeway advocating IRA contributions. Back in Ireland, that was pretty illegal (where IRA stands for the outlawed Irish Republican Army!).

44. TV show with the most Emmy nominations, informally : SNL
NBC first aired a form of “Saturday Night Live” in 1975, under the title “NBC’s Saturday Night”. The show was actually created to give Johnny Carson some time off from “The Tonight Show”. Back then “The Tonight Show” had a weekend episode, and Carson convinced NBC to pull the Saturday or Sunday recordings off the air and hold them for subsequent weeknights in which Carson needed a break. NBC turned to Lorne Michaels and asked him to pull together a variety show to fill the vacant slot, and he came up with what we now call “Saturday Night Live”.

49. Part of NBC: Abbr. : NATL
NBC has had a number of different logos in the history of the company, including the famous peacock with which we are familiar today. The first peacock logo was introduced in the early days of color television and was designed to illustrate how wonderful color television would be, so go buy one! (NBC was owned by RCA, and they had a vested interest in sales of color television sets).

52. Natalie Portman’s birthplace : ISRAEL
The actress Natalie Portman was born in Jerusalem, Israel. She moved to the US with her family when she was just three years old.

55. Overused plot device : CLICHE
“Cliché” is a word that comes from the world of printing. In the days when type was added as individual letters into a printing plate, for efficiency some oft-used phrases and words were created as one single slug of metal. The word “cliché” was used for such a grouping of letters. It’s easy to see how the same word would become a term to describe any overused phrase. Supposedly, “cliché” comes from French, from teh verb “clicher” meaning “to click”. The idea is that when a matrix of letters was dropped in molten metal to make a cliché, it made a clicking sound.

61. Curtis of hair care : HELENE
Helene Curtis Industries was based in Chicago, and was taken over by Unilever in 1996. Helene Curtis was the first company to use the term “hairspray”, when it introduced aerosol products in 1950.