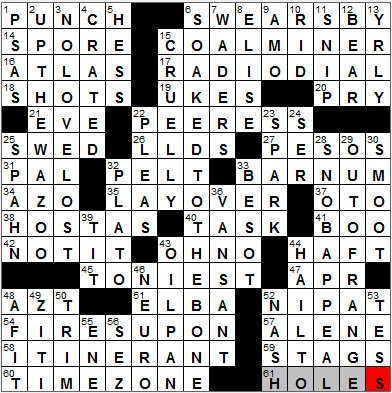 
Today’s Wiki-est, Amazonian Googlies
14. Moss source : SPORE
Spores are produced by many bacteria, fungi and non-flowering plants. A spore is a reproductive body encased in a protective shell that is highly resistant to damage, and resistant to heat in particular.

16. Holder of legends : ATLAS
Maps in an atlas will usually have a legend, listing the symbols in use.

19. Entertainment at a luau : UKES
The ukulele originated in the 1800s, and mimicked a small guitar brought to the Hawaiian Islands by Portuguese immigrants.

26. Some attorneys’ degs. : LLDS
The honorary degree of Legum Doctor (LL.D.) translates from the Latin as Doctor of Laws, a plural. This practice of using the plural originated in Cambridge University in England, as one was awarded an LL.D. after having been taught both Canon Law and Civil Law.

27. Money in Manila : PESOS
The writing on bank notes in the Philippines used to be in English, so the currency was recorded as the “peso”. Since 1967 the language on the notes has been Filipino, and now the name of the currency is written as “Piso”.

33. Show for which Jim Dale won the 1980 Tony for Best Actor in a Musical : BARNUM
The musical called “Barnum” is of course based on the life of the showman P. T. Barnum. Given Barnum’s profession, the musical is unusual in that it prominently features entertaining circus acts. The original Broadway production opened in 1980.

Jim Dale is an English actor best known, in his part of the world anyway, for many performances in the “Carry On” series of films. He won a Tony for playing the lead on Broadway in the musical “Barnum”. Dale must have liked it over here in the US because he has lived in New York ever since.

34. Kind of compound in chemistry : AZO
Azo compounds have very vivid colors and so are used to make dyes, especially dyes with the colors red, orange and yellow.

38. Landscaping plants : HOSTAS
The Hosta genus of plant was once classified as a lily, but is now in a family of its own and is described as “lily-like”. The plant was given the name “Hosta” in honor of the Austrian botanist Nicholas Thomas Host.

45. Most chic : TONIEST
“Toniest” is a superlative derived from the word “tone”, and is used to describe an exclusive manner or quality.

48. Drug sold under the brand name Retrovir : AZT
AZT is the abbreviated name for the drug azidothymidine, much used in the treatment of HIV/AIDS. AZT was originally developed in the seventies as a potential treatment for retroviruses (cancer-causing viruses), although it was never approved for use in such treatment. In 1984 it was confirmed that AIDS was caused by the human immunodeficiency virus (HIV), so scientists turned to known antiviral drugs in the search for a viable treatment. Burroughs-Wellcome came up with a treatment regime using AZT, and filed a patent in 1985. The patent was challenged in court, but the patent expired anyway in 2005 without any decision being made. There are now at least four generic forms of AZT approved for sale in the US.

51. Site of an 1815 escape : ELBA
I had a lovely two-week vacation in Tuscany once, including what was supposed to be a two-night stay on the island of Elba. I had envisioned Elba as a place full of history, and maybe it is, but it is also overrun with tourists who use it as a beach getaway. We left after one day and we won’t be going back again …

Napoleon was sent into exile twice. A coalition of European powers sent him to the island of Elba in Tuscany in 1814, only for him to escape after a year and return to power. After Wellington defeated him at Waterloo, Napoleon was dispatched to the British-owned island of St. Helena in the South Atlantic, where he spent the last six years of his life.

57. Coeur d’___, Idaho : ALENE
The city of Coeur d’Alene, Idaho is named for the Coeur d’Alene People, Native Americans who lived in the area when it was first explored by French Canadian fur traders. “Coeur d’Alene” translates from French as “heart of an awl”. The Native American people were given this name as they were perceived as shrewd traders by their Canadian counterparts.

59. Restricted parties : STAGS
Back where I come from, bachelor parties are called stag parties, and bachelorette parties are hen parties. And in Ireland the fairer sex usually isn’t welcome at a stag party, not even for entertainment purposes. We tend to focus on the drink …

60. Alaska or Hawaii : TIME ZONE
Local solar time was replaced with standard time zones with the increasing use of rail travel and telecommunications as the variations in local solar times became very inconvenient. Time zones in the US vary in hourly increments, but in some parts of the world a 30-minute or even 15-minute difference can apply.

2. Plentifully, in slang : UP THE WAZOO
The slang term “up the wazoo” means to have plenty. It’s pretty vulgar slang and is a specific anatomical reference so I don’t think it belongs in the crossword myself …

5. Russian chemist with a law of thermodynamics named after him : HESS
Hess’s Law is used in physical chemistry and is an expression of the first law of thermodynamics. The law basically says that the sum of the energy changes taking place in each step of a chemical reaction is equal to the total energy change for that reaction. The law was formulated by the Russian chemist and physicist Germain Hess.

8. One of Beethoven’s bagatelles is dedicated to her : ELISE
“Fur Elise” is a beautiful piece of music written by Beethoven, and is also known as “Bagatelle in A Minor”. “Fur Elise” means simply “For Elise” but sadly, no one knows the identity of the mysterious Elise.

10. ___-X (septic treatment brand) : RID
Rid-X is a brand owned by Reckitt Benckiser, the world’s largest producer of household products. The company headquarter is in Slough in the UK.

11. Impertinent one : SNIP
The use of “snip” to mean an impertinent or mischievous person is an informal usage.

15. How Simon Cowell often critiques : CRUELLY
Simon Cowell was invited to be a judge on “Pop Idol”, a British show that spawned “American Idol”. Cowell was then asked to take part in the US spin-off, and we haven’t stopped seeing him since …

30. ___-Hawley Tariff Act of 1930 : SMOOT
The Smoot-Hawley Tariff Act of 1930 was sponsored by Senator Reed Smoot and Representative Willis C. Hawley. The act raised tariffs on imported goods to record levels, the second highest in US history. The strategy appeared to work at first, protecting US jobs in the early days of the depression. But, as many anticipated, tariffs were raised in retaliation by other countries and US exports plummeted. Many economists blame the 1930 Tariff Act for the depth of the Great Depression.

32. Academy head : PLATO
The Academy was founded by Plato circa 387 BC in Athens. Aristotle studied at the Academy for twenty years and then founded his own school called the Lyceum.

“Good Will Hunting” was the movie that gave both Matt Damon and Ben Affleck their big break in films, and deservedly so. Affleck and Damon are actually distant cousins who lived two blocks from each other in Cambridge, Massachusetts where the pair spent their teen years. The two friends wrote the film’s screenplay and of course took starring roles, alongside Robin Williams and Minnie Driver. Affleck and Damon won an Academy Award for the screenplay. What a great success story, eh?

44. Start of a presidential march : HAIL TO
“Hail to the Chief” was first published in 1812 as “March and Chorus in the Dramatic Romance of the Lady of the Lake”. The lyrics are from Sir Walter Scott’s poem “The Lady of the Lake”, and the music was written by a songwriter called James Sanderson.

49. Tubular pasta : ZITI
Cylindrical pasta is known in general as “penne”, and there are many variants. Ziti is a particularly large and long tube, with square-cut ends.

52. Humorist who wrote “Progress might have been all right once, but it has gone on too long” : NASH
The poet Ogden Nash was well known for his light and humorous verse. Try this one:

53. One of the Durbeyfields : TESS
In Thomas Hardy’s novel, the heroine and title character is Tess Durbeyfield. Her father is an uneducated peasant and when he hears that his name is a corruption of the noble name of “D’Urbeville”, the news goes to his head.

The full name of Thomas Hardy’s 1891 novel is “Tess of the d’Urbervilles: A Pure Woman Faithfully Presented”. When it was originally published, “Tess …” received very mixed reviews, largely because it addressed some difficult sexual themes including rape, and sexual double standards (attitudes towards men vs women). I suppose the most celebrated screen adaptation is Roman Polanski’s “Tess” released in 1979. Polanski apparently made “Tess” because his wife, Sharon Tate, gave him Hardy’s novel as her last act before she was murdered by the Manson family. There is a dedication at the beginning of the movie that just says “To Sharon”.