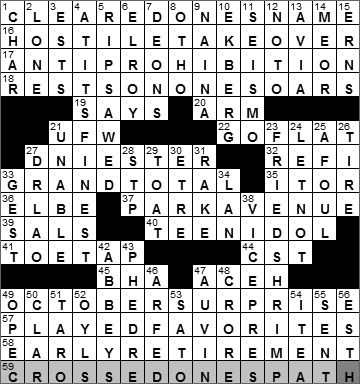 THEME: None
COMPLETION TIME: Didn’t finish!
ANSWERS I MISSED: Too many! (all in the bottom 5 rows)

Across
16. Merger alternative : HOSTILE TAKEOVER
In the world of business a takeover is the purchase one company by another. If the board of a target company believes that the purchase is a good idea for its company’s shareholders, they usually recommend that the shareholder’s accept the offer, and the takeover is termed “friendly”. If the target company’s board rejects the purchase offer, then the acquiring company can still try to proceed with the transaction, usually by offering the shareholders a price above the market level. This is termed a hostile takeover. If the acquiring company can get control of a majority of shares, it is then free to replace the old board and complete the transaction.

18. Stops striving : RESTS ON ONE’S OARS
To rest on one’s oars is to relax, especially after having made an effort.

21. Agricultural labor grp. : UFW
The UFW is the United Farm Workers of America, a labor union formed by the merger of the Agricultural Workers Organizing Committee (AWOC), and the National Farm Workers Association (NFWA) that was led by Mexican American labor leader Cesar Chavez.

27. Ukraine/Moldova border river : DNIESTER
The Dniester is a river that rises in the Ukraine and empties into the Black Sea. For much of its length it marks the border between Ukraine and Moldova.

36. River through Dresden : ELBE
The River Elbe rises in the Czech Republic, and travels over a thousand kilometers before emptying into the North Sea where it feeds the port of Hamburg. Just after passing over the border from the Czech Republic into Germany, the Elbe passes through the historic city of Dresden. Dresden was almost completely destroyed during WWII, especially as a result of the famous firebombing of the city in 1945. Restoration work in the inner city in recent decades led to it being designated as a UNESCO World Heritage Site, however, in 2006 when the city built a highway bridge close to the city center, UNESCO took Dresden off the list. This marked the only time a European location lost World Heritage status.

37. Where Citigroup and JPMorgan Chase are headquartered : PARK AVENUE
In 1998, one of the biggest company mergers in history took place, between Citicorp and Travelers Group. The result was Citigroup, a seemingly unstoppable giant, until we taxpayers bailed the company out in 2008 with $25 million.

The JPMorgan Chase company was formed in 2000 when Chase Manhattan merged with J.P. Morgan. In the 2008 financial crisis, JPMorgan stepped in and purchased Washington Mutual in an overnight transaction when the bank failed, purchasing it for a mere $1.9 billion dollars. Washington Mutual shareholders lost all their equity, but the bank’s customers lost nothing.

” is a Spike Lee movie, released in 1989. Much of the action is centered on a local pizzeria owned by Italian-American Salvatore Frangione (played by Danny Aiello), so the place is called Sal’s.

44. New Orleans setting: Abbr. : CST
New Orleans, like the whole of the state of Louisiana, is in the Central Time Zone.

45. Food preservative, briefly : BHA
BHA ia Butylated HydroxyAnisole. It is widely used as a food additive, as it is a powerful anti-oxidant and helps to prevent food from going rancid. However, it is a known carcinogen for laboratory animals, and has been listed as a carcinogen by the State of California. But, we still consume it as surveys of the human population show that only a small fraction of us consume levels of BHA above the rate deemed to cause cancer. Don’t get me started …

47. Banda ___ (2004 tsunami site) : ACEH
Banda Aceh is a large city on the Indonesian island of Sumatra. Banda Aceh made it big in the news for all the wrong reasons in December 2004. There was a magnitude 9.3 earthquake under the Indian Ocean with the epicenter 155 miles away from the city, and close enough to inflict damage. Soon afterwards the real damage occurred when a tsunami caused by the earthquake hit the city. The incoming wave was just under 80 feet in height when it came ashore. In Indonesia alone, the death toll from the earthquake and tsunami was almost 200,000 people.

49. Bombshell revealed shortly before Election Day : OCTOBER SURPRISE
Election Day was chosen by congress back in 1845. The month of November was selected as it suited an agricultural society, following the fall harvest, and yet not too much into winter which could make travel difficult. Tuesday was chosen so that people had time to travel to polling stations. Monday elections might have meant that some would have to start out on Sunday, and that might interfere with Christian services.

Down
1. Not just brown : CHAR
“To char” something means to really burn it, as in “reducing it to charcoal”. So, our word “char” is a back formation from “charcoal”.

2. Like a maverick : LONE
The concept of being one’s own person, going it alone, is popularly known as being a “maverick”. In the days of open range ranching, a maverick was a steer that didn’t carry a brand. An unbranded animal was usually the result of a branded animal giving birth on the open range, with the young growing up without having being captured and claimed by an owner. The use of the name “maverick” comes from a Texas rancher, Samuel Maverick, who refused to brand his cattle. He stated that he did not want to inflict pain on his cattle, and so laid claim to any cattle on the range that wasn’t branded. His stubborn refusal to cooperate with the neighboring ranchers gave rise to our modern description of a single-minded individual as a “maverick”.

4. Quintessentially : AT IT’S FINEST
In Ancient Greece, Aristotle believed that there was a fifth element, beyond the accepted four elements of earth, wind, fire and water. This fifth element he called aether, postulating it was the makeup of celestial bodies. In Middle French in the 14th century, the “fifth element” was called “quinte essence”, coming into English as “quintessence’ in the early 15th century. In the late 1500s, quintessence came to mean “purest essence” in a more general sense, with quintessential meaning “at it’s finest”.

6. Football Hall-of-Famer Hirsch : ELROY
Running back Elroy Hirsch was famous for his unusual running style, earning him the nickname “Crazylegs”. Hirsch starred in a biopic of his life released in 1953, and called “Crazylegs”. That wasn’t his only acting role, as he also appeared in a 1957 airline disaster movie called “Zero Hour!”.

7. Actor Richmond and singer Jackson : DEONS
Deon Richmond is an actor best known for appearing in “The Cosby Show

“, playing Kenny (or “Bud”), a close of friend of Rudy Huxtable.

Deon Jackson is a soul singer from Ann Arbor, Michigan. He was a bit of a one-hit-wonder, recording “Love Makes the World Go Round

8. Early Roman emperor : OTHO
Otho was Emperor of Rome for only two months, before he committed suicide.

9. Mrs. Boris Yeltsin : NAINA
Naina and Boris Yeltsin were married in 1956, and have two daughters. Mrs. Yeltsin is of course a widow now, after her husband died in 2007.

10. “La Dolce Vita” actress : EKBERG
Anita Ekberg is a Swedish model and actress, famous for her role on the big screen in the 1960 Fellini film “La Dolce Vita

“. You might remember her cavorting in the Trevi Fountain in Rome in one famous scene, with the male lead, Marcello Mastroianni.

11. Earth-shaking beginning? : SEISMO
“Seismos” is the Greek word for an earthquake.

13. Reebok rival : AVIA
The Avia brand name for athletic shoes was chosen as it it is the Latin word for “to fly”, and suggested the concept of aviation.

15. Kite relatives : ERNS
An ern (also erne) is also called the while-tailed eagle, and the sea-eagle.

“, by Robert Louis Stevenson. The first restaurant was opened in 1969 in Lexington, Kentucky. The chain went bankrupt in 1998, but was picked up out of receivership so they’re still operating. I don’t think I’ve ever been in one …

is the fifth book of the Hebrew Bible. The English name “Deuteronomy” comes from the Greek for “second law”.

” is a novel by Charles G. Finney, first published in 1935. There was a famous film adaptation released in 1964 called “7 Faces of Dr. Lao

” starring Tony Randall in the title role. Randall wasn’t the first choice, as the director wanted Peter Sellers for the part. However, MGM insisted on an American lead, and a great choice it turned out to be.

33. Daring exploit : GEST
Our word “gest” meaning a great deed or an exploit has been around since about 1300, and comes from the Old French word “geste” meaning the same thing, although these days “geste” also means “gesture”. Makes sense …

34. PC connection : LAN
You may have a Local Area Network (LAN) in your house. If you’ve got a PC and a router or switch, likely attached to some modem, then you have a LAN.

38. Firm cheese, for short? : VICE PRES
A vice president is a big cheese in a company.

43. 1677 Racine tragedy : PHEDRE
Jean Racine was a French dramatist in the 17th century, a compatriot of the more famous Moliere. He wrote the dramatic tragedy called “Phedre

47. Coq ___ : AU VIN
The French word “coq” actually means rooster, but a more tender bird is usually used to make this classic dish. The most common wine used for the “vin” is burgundy, or another red, but you can also find on a menu in France “coq au Champagne” and “coq au Riesling”.

48. 10 million rupees : CRORE
A crore is a number in the Indian numbering system, and can be applied to more than just money (rupees). The Indian version of the show “Who Want to Be a Millionaire?” was featured in the hit movie “Slumdog Millionaire

“, The actual Indian title of the TV show is “Kaun Banega Crorepati” translating as “Who will become the owner of ten million?”

49. Grp. that rolls out the barrels? : OPEC
The OPEC cartel (the Organization of the Petroleum Exporting Countries) was formally established in 1960, and has been headquartered in Vienna since 1965.

50. Woodwind instr. : CLAR
The clarinet is a lovely-sounding instrument, isn’t it? The name comes from the Italian word “clarino” meaning “trumpet” with the “-et” suffix indicating “small”.

51. Hawaiian staple : TARO
I am a big fan of starch, and being an Irishman I love potatoes however they are prepared. That said, I think that poi tastes horrible! Poi is made from the bulbous tubers (corm) of the taro plant, by cooking the corm in water and mashing it until the desired consistency is achieved.

“. The strip, created by E. C. Segar, had been around for ten years before Popeye made his appearance. Popeye received such a great welcome from readers, that he soon “took over” the strip, and eventually even the strip’s title. Paradoxically, before Popeye turned up, Olive Oyl was the main character of “Thimble Theatre”, dating back to its inception.

53. Japanese Peace Nobelist of 1974 : SATO
Prime Minister Eisaku Sato of Japan won the Nobel Peace Prize in 1974 (sharing it with Irishman Sean MacBride). He won for “his renunciation of the nuclear option for Japan and his efforts to further regional reconciliation”. Sato defined Japan’s nuclear policy in the sixties by laying out “Three Non-Nuclear Principles”. The principles are that Japan will not possess, nor manufacture nuclear weapons, not permit introduction of nuclear weapons into Japanese territory.

54. Willow variety : ITEA
Itea is the Greek word for “willow”.