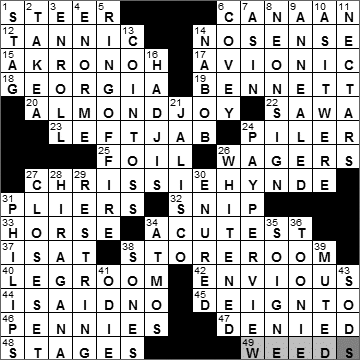 Across
1. Use a joystick : STEER
The name “joystick” is aviator slang, a descriptive name for the main control lever of plane.

6. Biblical figure who received the curse of Ham : CANAAN
Canaan was the son of Ham, and therefore the grandson of Noah. In the story of “The Curse of Ham” in the Book of Genesis, Noah had a vineyard, and made wine from the grapes. One day he drunk too much of his wine, and passed out in his tent, unclothed. Noah’s son, Ham, saw his father lying there naked and told his two brothers who, with diverted eyes, went into the tent and covered Noah’s body. When Noah woke up and realized what had happened, he blessed the sons who covered his nakedness, and cursed Ham who had seen him unclothed. He actually placed the curse on Ham’s son, Canaan, condemning his grandson to be “a servant of servants”.

12. Somewhat astringent, as wine : TANNIC
A substance that is astringent is a chemical compound that tends to shrink or constrict body tissues. Some red wines can have an astringent taste, a dry and puckering feeling, because of the presence of tannins. Tannins occur naturally in plants, probably as a defensive measure against predators who shy away from the astringent. The word “tannin” comes from and Old German word for oak or fir tree, as in “Tannenbaum”.

15. City where A.A. was founded : AKRON, OH
Alcoholics Anonymous was founded in 1935, by Bill Wilson and Dr. Bob Smith in Akron, Ohio. As the organization grew, the guiding principles established by the founders was formatted into a 12-step program that was in place by the time the forties rolled round.

” movie is based on the 1987 play by Alfred Uhry. Not only did Uhry win the Pulitzer for the play, he also won an Academy Award for the screenplay for the movie. When Miss Daisy’s driver, Hoke, takes her from Atlanta to Mobile for her brother’s 90th birthday party, Hoke reveals to his passenger that the journey marked the first time he had ever left his home state of Georgia.

19. Conservative pundit with a daily morning radio show : BENNETT
William Bennett is a conservative radio show host, and someone you might see on CNN around election time in panel discussions. His “Morning in America” show is nationally syndicated and can be heard in the morning drive time slot. In 1986, President Reagan appointed Bennett as Secretary of Education, a post he held until 1988. Bennett was actually a Democrat until he was given the cabinet post, when he switched to the Republican party.

20. Popular bar since 1946 : ALMOND JOY
I think my favorite candy growing up was an Almond Joy (although in my part of the world it was a little different formulation and was called a Bounty Bar

, and was more like a Mounds bar). The Almond Joy bar has been around since 1946.

22. “I never ___ moor”: Emily Dickinson : SAW A
On our recent trip around the country, we had a very disappointing stop in Amherst, Massachusetts intending to visit the home of Emily Dickinson

. We hadn’t done our homework, and didn’t realize that the home was only open for tours on certain days of the week, and not the day we were there (so be warned!). Emily Dickinson wrote nearly 1800 poems

in her lifetime, less than a dozen were published before she died in 1886. Emily’s younger sister discovered the enormous collection, and they were published in batches over the coming decades. Try this one …

I never saw a moor,
I never saw the sea ;
Yet know I how the heather looks,
And what a wave must be.

I never spoke with God,
Nor visited in heaven ;
Yet certain am I of the spot
As if the chart were given.

Emily wrote that when she was just 12 years old …

25. Wrap in sheets : FOIL
Before thin sheets of aluminum metal were available, thin sheets of tin were used for the same purpose. Tin foil isn’t a great choice for wrapping food though, as it imparts a tinny taste. On the other side of the pond, aluminum foil has a different name. No, it’s not just the different spelling of aluminum (“aluminium”). We still call it “tin foil”. You see, we live in the past …

27. The great Pretender? : CHRISSIE HYNDE
Chrissie Hynde is the lead singer and guitarist of the rock band the Pretenders. Hynde formed the Pretenders in the late seventies, and despite changes in the band’s lineup, Hynde kept the Pretenders going right through the early nineties. Hynde is an enthusiastic vegan and supporter of the animal rights group PETA. If you’re in Hynde’s home town of Akron, Ohio you can eat at her vegan restaurant, “The VegiTerranean”.

33. Basketball shooting game : H-O-R-S-E
H-O-R-S-E is a basketball game for two or more players. The first person to play shoots from anywhere on the court, and if he or she makes it, the second player has to make the same shot from the same place. If the second player misses, he/she receives the letter “H”. The first player to spell out the word “horse” is the loser.

was the most flamboyant of personalities, a playwright, composer and actor. Coward worked in a remarkable range of genres. He wrote the wonderfully airy play “Blithe Spirit

“, as well as the Oscar-winning WWII naval drama “In Which We Serve

“. Some of his more famous songs, many of which he performed himself in cabaret, were “Mad Dogs and Englishmen

38. Pantry : STOREROOM
The word “pantry” dates back to 1300, when it came into English from the Old French “panetrie” meaning a “bread room”. Bread is “pain” in French, and “panis” in Latin.

42. Green : ENVIOUS
William Shakespeare was one of the first to associate the color green with envy. He called jealousy the “green-eyed monster” in his play, “Othello

Down
1. One way to go to a party : STAG
Back where I come from, bachelor parties are called stag parties, and bachelorette parties, are hen parties. And in Ireland the fairer sex usually isn’t welcome at a stag party, not even for entertainment purposes. We tend to focus on the drink …

Marne is a department in the northeast of France, famous for being the home of the vineyards of Champagne.

5. Country standard that begins “Love is a burning thing” : RING OF FIRE
The country classic “Ring of Fire” was written by Merle Kilgore and June Carter. The first recording of the song was made by June Carter’s sister, Anita, in 1963

6. Quail flock : COVEY
Covey is the name given to a group of partridges or quails.

8. Strip teaser? : NEON SIGN
Neon signs might tease one as one walks along the Strip (in Vegas).

9. Toughened : ANNEALED
One anneals glass or metal by exposing to a very specific temperature profile, resulting in a tougher or less brittle product.

14. Big shot : NABOB
A nabob is a person of wealth and prominence, from the title of a governor in India, I just found out …

16. Some pilgrims : HADJIS
Hadji is the term used for someone who has made a pilgrimage to Mecca, and it is sometimes also used as a form of address for such a person. The word Hadji actually translates into English as “pilgrim”.

21. Lake Chapala’s state : JALISCO
Jalisco is a state on the central-west coast of Mexico. The capital city of Jalisco is Guadalajara.

28. Set of cursive Japanese symbols : HIRAGANA
Japanese writing comes in a number of forms, including romaji (which uses the Latin alphabet), kanji (which uses Chinese characters) and hiragana (which has a cursive and flowing appearance).

30. Toughened : ENURED
Enure is a variant of inure, meaning to harden oneself against the effects of, to accustom oneself to.

31. Big name in home theaters : PHILIPS
Philips is one of the biggest electronics companies in the world, with more than 100,000 employees working in over 60 countries. The company was founded in 1891 by Gerard Philips in Eindhoven in the Netherlands. Gerard Philips, coincidentally, was a maternal cousin of Karl Marx.

34. ___ Energy (big natural gas utility) : ATMOS
Atmos Energy was founded as Energas in 1983, and is based in Dallas, Texas. Atmos distributes more natural gas than any other company in the US.

36. It’s worth a couple of bucks in Canada : TOONIE
Toonie is the familiar name for a two-dollar coin in Canada. The toonie replaced the two-dollar bill in 1996. The paper bill cost 6 cents to print, and lasted about a year in circulation, whereas the toonie costs 16 cents to mint, and should last 20 years. Good move …

38. Acoustics measures : SONES
In the acoustic world, the sone was introduced as a unit of perceived loudness in 1936.

41. His vet is Liz Wilson : ODIE
Jon Arbuckle is a fictional character, the owner of Odie, from Jim Davis’s comic strip, “Garfield”. Garfield is Arbuckle’s orange tabby cat. Odie is his less than smart beagle.