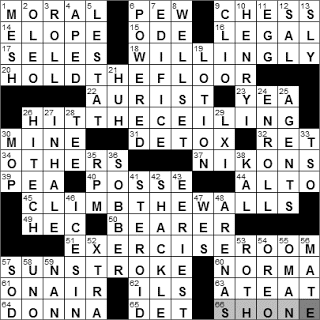 THEME: EXERCISE ROOM … all of the theme answers are things one might do for EXERCISE, combined with parts of a ROOM i.e. HOLD THE FLOOR, HIT THE CEILING, CLIMB THE WALLS
COMPLETION TIME: 9m 31s
ANSWERS I MISSED: 0

9. Game with knights : CHESS
It is believed that the game of chess originated in northwest India, evolving from a 6th-century game called “caturanga”, a Sanskrit word meaning “four divisions”. These four (military) divisions were represented in the game:

16. 8 1/2″ x 14″ paper size : LEGAL
Like so many things, our paper sizes here in North America don’t conform with the standards in the rest of the world. ISO standard sizes used elsewhere have some logic behind them, in that the ratio of width to length is usually one to the square root of two. This mathematical relationship means that when you cut a piece of paper in half, it preserves the same aspect ratio, which can be useful in making reduced or enlarged copies of documents. Our standard sizes of “letter” (8.5 x 11 inches) was determined in 1980 by the Reagan administration to be the official paper size for the US government. The “legal” size (8.5 x 14 inches) was established in 1921 as a standard by the US government.

17. Monica with two U.S. Open wins : SELES
Monica Seles has a Hungarian name as she was born to Hungarian parents in former Yugoslavia. She was the World No. 1 professional tennis player in 1991 and 1992 before being forced from the sport when she was stabbed by a German spectator at a match in 1993. She did return to the game two years later, but never achieved the same level of success.

22. Ear doctor : AURIST
“Aurist” is an old name for what we know call an “audiologist”.

37. Popular cameras : NIKONS
Nikon was founded in 1917, a merger of three companies making various optical devices. After the merger, the company’s main output was lenses (including the first lenses for Canon cameras, before Canon made their own). During the war, Nikon sales grew rapidly as they focused on equipment for the military including periscopes and bomb sights. Today, Nikon is part of the Mitsubishi group of companies.

44. Choir voice : ALTO
In a choral music, alto is the second-highest voice in a four-part chorus: soprano, contr(alto), tenor, bass. The word “alto” describes the vocal range, that of the deepest, female singing-voice, whereas the term “contralto” describes more than just the alto range, but also its quality and timbre. An adult male’s voice (not a boy’s) with the same range as an alto is called a “countertenor”.

45. Be stir-crazy : CLIMB THE WALLS
“Stir” is a slang term for prison, but no one seems to from where the usage originates.

49. “___ Ramsey” (1970s western) : HEC
“Hec Ramsey” was a TV western starring Richard Boone that aired in the early seventies. The series was unusual in that it was set late in the days of the Old West, and the title character focused less on using a gun, and more on using forensic techniques to catch the bad guys.

57. Summer woe : SUNSTROKE
The clinical definition of “heat stroke” is a body temperature of 105.1 F, provided that the elevated temperature is caused by environmental heat exposure (and not by a fever).

60. ___ Jean (Marilyn, originally) : NORMA
Marilyn Monroe was born in 1926 in LA County Hospital, the child of Gladys Pearl Baker. The young girl was given the name of Norma Jeane Mortensen on her birth certificate, but her mother changed this to Norma Jeane Baker almost immediately. She and her estranged husband, Martin Edward Mortenson, had separated before Baker became pregnant so it is suggested that the Mortensen name was used to just to give Norma Jeane “legitimacy”. Norma Jeane married a Jim Dougherty when she 16 years old, and took his name to become Norma Jeane Dougherty in 1932. During WWII she was discovered by a photographer and became quite a successful model. The modelling earned her a screen test, at which time it was suggested that Norma Jean change her name. The first name chosen for her by studio executives was Carole Lind (after Carole Lombard and Jenny Lind), but then Norma Jeane chose “Jeane Monroe” for herself, using her mother’s maiden name. It didn’t take long before the studio intervened again, suggesting that they had too many “Jeans” already. The name Marilyn Monroe was floated as it had a nice ring to it. Along with the new name, Marilyn changed from being a brunette to a blonde, and a star was born …

62. They, in Tours : ILS
“Ils” is the French for “they”, when not referring to feminine nouns.

64. Summer who sang “Love to Love You Baby” : DONNA
Donna Summer is known as “The Queen of Disco”, with great hits like “Love to Love You, Baby”, “I Feel Love” and “Hot Stuff”. In the late sixties and early seventies, LaDonna Gaines (her real name) lived and worked in Germany. There she met and married an Austrian actor called Helmuth Sommer. They divorced not long after the marriage, but Donna kept his family name, just changing the “o” to “u” to give her the stage name of “Donna Summer”.

Down
2. Dairy case bar : OLEO
Emperor Louis Napoleon III of France announced a competition to develop a substitute for butter, something that would be more accessible to the lower classes and more practical for the armed forces. A French chemist called Hippolyte Mege-Mouries came up with something he called oleomargarine in 1869, which was eventually manufactured under the trade name “margarine”.

9. Advertising award : CLIO
The Clio Awards are the Oscars of the advertising world and are named after Clio, the Greek Muse of History. Clio was also the recorder of great deeds, the proclaimer and celebrator of great accomplishments and a source of inspiration and genius. I guess that was considered a fitting moniker for ad design when the awards were initiated in 1959.

10. English king crowned in 1100 : HENRY I
The first of the Henrys, Henry I, was king of England from 1100 until he died in 1135. He was of the House of Normandy and was the fourth son of William I (William the Conqueror, of Battle of Hastings fame). Henry succeeded to the throne of England after his elder brother, William II, was shot with an arrow while hunting, apparently by accident.

12. Mineo of film : SAL
Sal Mineo’s most famous role was that of John “Plate” Crawford, the kid who was in awe of the James Dean character in “Rebel Without a Cause”. Sadly, Sal Mineo was murdered in in 1976, when he was just 37 years old. He was attacked in the alley behind his Los Angeles apartment and stabbed through the heart. An arrest was made, and it was discovered that the murderer apparently had no idea who his victim was and was just intent on robbery.

30. Swabbie’s handful : MOP
“Swabbie” (also “swab, swabber”) is a slang term for a sailor that we’ve been using since the late 1700s. A “swab” was originally a member of the crew assigned to the swabbing of the ship’s decks.

33. General on Chinese menus : TSO
General Tso’s chicken is an American invention on the menu of a Chinese restaurant. The name General Tso may be a reference to General Zuo Zontang of the Qing Dynasty, but there is no clear link.

35. 33 1/3, for an LP : RPM
The first standard set for rotational speed of gramophone records was 78 rpm, but like so many things it seems, the US version of “78” was slightly different from that for the rest of the world. The US record was designed to play at 78.26 rpm, whereas the standard in the rest of the world was 77.92 rpm. So, imported records played on American equipment didn’t sound quite as they were intended.

Vinyl records designed to play at 33 1/3 rpm were introduced by RCA Victor in 1931, but were discontinued due to quality problems. The first true, Long Play (LP), 33 1/3 rpm disc was introduced by Columbia Records in 1948, with RCA Victor following up with a 45 rpm “single” the following year, in 1949.

38. Penn of “Harold & Kumar” films : KAL
Indian-American actor Kal Penn made a name for himself in the “Harold & Kumar” series of comedy films. These so called “stoner comedies” are not my cup of tea, but I enjoyed him playing his more mainstream roles on TV’s “House” and “24”. While Penn’s career was just taking off, he left the world of acting when President Obama won the 2008 election and now works as an Associate Director in the White House Office of Public Engagement (although he did leave the White House briefly to film the “Harold & Kumar” sequel).

41. Olympian’s no-no : STEROID
Steroids are found commonly in nature, with familiar examples being cholesterol and testosterone. The controversial class of drugs known as anabolic steroids are artificially produced chemicals designed to mimic the effect of the male sex hormone, testosterone. They are termed “anabolic” as they build up cellular tissue (particularly muscle) in a process called anabolism.

47. Director Craven : WES
Wes Craven is a very successful film director and writer, specializing in movies of the horror genre, which means I don’t watch them! He is responsible for “A Nightmare on Elm Street” and the “Scream” films.

53. “Letting Go” novelist Philip : ROTH
Author Philip Roth’s two most famous works are probably his 1959 novella “Goodbye, Columbus” for which he won a National Book Award, and his extremely controversial 1969 novel “Portnoy’s Complaint”. The latter title was banned in some libraries in the US, and was listed as a “prohibited import” in Australia. The controversy surrounded Roth’s treatment of the sexuality of the main character, a young Jewish bachelor undergoing psychoanalysis, for his “complaint”.

54. Layered cookie : OREO
The Oreo cookie was the biggest seller in the 20th century, and almost 500 billion of them have been produced since they were introduced in 1912 by Nabisco. In those early days the creme filling was made with pork fat, but today vegetable oils are used instead. If you take a bite out of an Oreo sold outside of America you might notice a difference from the homegrown cookie, as coconut oil is added to give a different taste.

55. Neighbor of Yemen : OMAN
Yemen is located on the Arabian Peninsula, lying just south of Saudi Arabia and west of Oman. Yemen is the only state on the peninsula that is a republic (its official name is the Republic of Yemen). Everyone over the age of 18 gets to vote, but only Muslims can hold elected office.

56. 9-Across ending : MATE
9. Game with knights : CHESS
In the game of chess, when the king is under immediate threat of capture, it is said to be “in check”. If the king cannot escape from check, then the game ends in “checkmate” and the player in check loses. In the original Sanskrit game of chess, the king could actually be captured. Then a rule was introduced requiring that a warning be given if capture was imminent (today we announce “check!”) so that an accidental, early ending to the game doesn’t occur.

59. A Bobbsey twin : NAN
The Stratemeyer Syndicate was a producer of books aimed at children, founded by Edward Stratemeyer. The Stratemeyer books differed from the prevailing style of children’s books of the day, in that they clearly focused on entertainment value as opposed to moral instruction. Included in the list of Stratemeyer titles were the series “Nancy Drew”,”The Hardy Boys”, “Tom Swift” and “The Bobbsey Twins”.