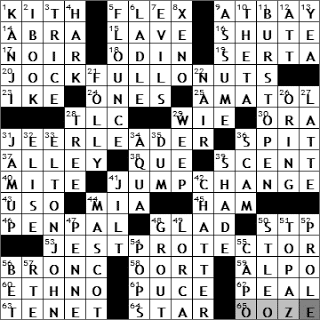 Across
1. Friends and neighbors : KITH
The word “kith” describes friends and acquaintances, and is used used in the phrase “kith and kin” meaning “friends and family”. “Kith” comes from an Old English word meaning “native country, home”, as the expression “kith and kin” originally was used, in the late 1300s, to mean “country and kinsmen”.

14. Start of an incantation : ABRA
The incantation “abracadabra” has a long history. It was used as far back as the 2nd century AD in Ancient Rome, when the word was prescribed by a physician to be worn on an amulet, to help his emperor recover from disease. The word is Aramaic, and has the approximate translation of “I will create as I speak”.

16. “On the Beach” author : SHUTE
“On the Beach” is a wonderful novel by Nevil Shute, first published in 1957. The famous story is about the ending of the human race as nuclear fallout spreads south from the northern hemisphere after WWIII. The novel was adapted into a great 1959 movie starring Gregory Peck, Ava Gardner and even Fred Astaire.

17. Hard-boiled crime genre : NOIR
The term “film noir” has French origins, but only in that it was “created” by a French critic in describing a style of Hollywood film. The term, meaning “black film” in French, was first used by Nino Frank in 1946. Film noir often applies to a movie with a melodramatic plot, with a private eye or detective at its center. Good examples would be “The Big Sleep” and “D.O.A”.

18. Aesir ruler : ODIN
Aesir is sometimes used as the collective noun for the Norse gods. In Norse mythology, Odin is the chief of the gods.

19. Perfect Sleeper maker : SERTA
Serta was founded in 1931 when a group of 13 mattress manufacturers came together, essentially forming a cooperative. Today, the company is owned by eight independent licensees, in a similar arrangement. Interesting …

20. Athlete who has pigged out on snacks at a bar? : JOCK FULL O’NUTS
From “chock full o’nuts”.

Chock full o’Nuts is a chain of lunch counters in New York City, originally founded by a Russian immigrant called William Black in 1926. Black had sold nuts to the theater-going public in Times Square, and he introduced a signature “nutted cheese” sandwich to his luncheonettes that gave the chain its name. The chain specialized in coffee and sandwiches, and introduced its own brand of coffee to supermarkets in 1953. The instant version of the coffee, launched in 1961, was a huge success. And, when Jackie Robinson retired from baseball, well he became a vice president of the company.

23. Interstate-championing prez : IKE
There doesn’t seem to be any good reason why President Eisenhower was called “Ike”. It is known however, that the nickname dates back to his childhood as that is what his parents called him.

25. Explosive of old : AMATOL
Amatol is a mixture of TNT and ammonium nitrate. It is no longer used today, but featured extensively in the two world wars. TNT, which was relatively costly, was able to “go further” with the addition of cheaper ammonium nitrate (fertilizer) with very little degradation in destructive power.

37. Place for a Dumpster : ALLEY
“Dumpster” is one of those words that we use generically that is actually a brand name. The original “Dumpster” was patented by the Dempster Brothers of Knoxville, Tennessee (hence the name, from “dump” and “Dempster”).

40. Pesky arachnid : MITE
Mites are tiny arthropods in the arachnid (spider) class. Mites are (annoyingly!) very successful creatures that have adapted to all sorts of habitats, and being so small, they generally pass unnoticed. Ick …

The slang term “chump change” means “a small amount of money”, and dates back at least to 1950.

43. Troop-entertaining grp. : USO
The United Service Organization was founded in 1941 at the request of FDR, “to handle the on-leave recreation of the men in the armed forces”. A USO tour is undertaken by troupe of entertainers, many of whom are big-name celebrities, to troop locations that often including combat zones.

45. Performer yukking it up : HAM
The word “ham”, describing a performer who overacts, is apparently a shortened form of “hamfatter” and dates back to the late 1800s. “Hamfatter” comes from a song in old minstrel shows called “The Ham-Fat Man”. It seems that a poorly performing actor was being compared to the “acting” qualities of a minstrel done up in black-face.

56. Rodeo ride : BRONC
A “bronco” (also “bronc”) is a horse that is untamed. In Mexican Spanish, a “bronco” is a horse, and in the original Spanish “bronco” means “rough, rude”.

58. Astronomy’s ___ cloud : OORT
The Oort Cloud is a hypothetical, spherical cloud of comets that lies about a light-year from the sun. It is postulated that periodic comets that enter our solar systems (like Halley’s Comet) originate in this cloud.

59. Brand for woofers, but not tweeters? : ALPO
The Alpo name is a brand of dog food originally produced by Allen Products, founded in 1936, with “Alpo” being an abbreviation for “Allen Products”. Lorne Greene used to push Alpo in television spots, as did Ed McMahon, and Garfield the Cat would you believe?

61. Purple shade : PUCE
The purple shade known a “puce” has a strange derivation. “Puce” came into English from French, in which “puce” means “flea”. Supposedly, puce is the color of a flea!

2. Old Apple laptop : IBOOK
From 1996 to 2006 Apple sold a relatively cost-effective line of laptops they called the iBook. Basically, an iBook was a stripped-down version of the high-end Powerbook, in a different form factor and targeted at the consumer and education markets. The iBook was replaced by the MacBook in 2006.

5. Walk with jerky motions : FLOUNCE
“To flounce” is to move in a lively or bouncy manner.

7. Escapees from Pandora’s box : EVILS
In Greek mythology, Pandora was given a jar and told not to open it under any circumstances. However, her curiosity was too much for her to control, and she opened it allowing the “evils” inside to escape into the world.

8. Alien: Prefix : XENO-
Xenophobia is the uncontrollable fear of foreigners. The word of course comes from Greek, with xeno meaning guest, stranger or foreigner, and phobia meaning fear, horror or aversion.

10. Angle symbol, in trigonometry : THETA
The Greek letter theta is commonly used in geometry to represent the angle between two lines (say at the corner of a triangle).

11. Explode like a puffball : BURST OPEN
A puffball is a type of fungus, so named because the spores are propagated in a dust-like cloud as its fruiting body matures and bursts open.

12. “Boston Legal” fig. : ATT
“Boston Legal” is a comedy-drama show that aired on ABC from 2004 to 2008, a spin-off of the earlier show, “The Practice”. The show features William Shatner and Candice Bergen.

22. Brand once advertised with the jingle “We wear short shorts …” : NAIR
Nair is a hair removal product that has some pretty harsh ingredients. The most important active constituents are calcium hydroxide (“slake lime”) and sodium hydroxide (“caustic soda”). The balance of the ingredients seem to be there to soothe the skin after the harsher chemicals have done their job. The name “Nair” probably comes from combining “no” and “hair”.

27. Barista’s offering : LATTE
The person who serves coffee in a coffee shop is often called a “barista”. “Barista” is the Italian for “bartender”.

The name latte is an abbreviation of the Italian “caffelatte” meaning coffee (and) milk. Note that in the original spelling of latte, the Italian word for milk, there is no accent over the last “e”. An accent is often added by mistake, perhaps meant to suggest that the word is French. In fact the French equivalent of a “latte” is a “cafe au lait”.

32. Beethoven dedicatee : ELISE
“Fur Elise” is a beautiful piece of music by Beethoven, also known as Bagatelle in A Minor. “Fur Elise” means simply “For Elise”, but sadly, no one knows who Elise was.

33. “Rocket Man” rocker : ELTON JOHN
Elton John’s 1972 hit “Rocket Man” was inspired by a short story of the same name written by Ray Bradbury. It’s a great song, that tells the story of an astronaut heading out for a “routine” space mission.

35. Scat syllable : DUM
Scat singing is a vocal improvisation found in the world of jazz. There aren’t any words as such, just random nonsense syllables made up on the spot.

36. Bernie Madoff’s hedge fund, e.g. : SCAM
Bernie Madoff is serving a 150-year sentence for having operated what is described as the largest Ponzi scheme in history. Basically Madoff took investor’s money and instead of investing it in the markets as agreed, he put the money into a bank account. He used some of the money invested from new investors to pay the older investors the anticipated monthly returns. This worked just fine, until too many investors started looking for the return of the original investment. The money was “gone”, paid to new investors (and Madoff), so the whole scheme collapsed.

41. Leave high and dry : JILT
To “jilt” someone with whom you have a relationship is to drop them suddenly or callously. “Jilt” is an obsolete noun that used to mean “harlot” or “loose woman”.

44. Mr. Met, for one : MASCOT
Mr. Met is the mascot of the New York Mets. He is a guy with a large baseball as a head, and has been elected to the Mascot Hall of Fame (woo hoo!).

47. Tubular pasta : PENNE
The name “penne” comes from the Latin word for feather or quill, recognizing that penne does indeed resemble the writing end of a quill.

48. Mosaic artist’s material : GROUT
Grout is a thin mortar used to fill the joints between ceramic tiles. The name “grout” comes from the Old English word “gruta”, the word for a “coarse porridge” (due to the similarity in appearance). Interestingly, the word “grits” comes from the same root. Grout … grits … makes sense …

49. Spanish poet García ___ : LORCA
Garcia Lorca was a Spanish poet and dramatist. Lorca is as famous for his poems and his plays as he is for the circumstances of his death. Although it has never been irrefutably proven, many believe that he was shot and killed while in the custody of Nationalist militia, one month after the outbreak of the Spanish Civil War.

50. Fifth-century canonized pope : ST LEO
Pope Saint Leo the Great is famous for having met with the feared Attila the Hun, and persuading him to turn back his invading force that was threatening to overrun Western Europe.

51. Birthstone for many Scorpios : TOPAZ
Topaz is the November birthstone, and the symbol of friendship, as well as the state gemstone of Utah. It is a silicate mineral containing aluminum and fluorine.

52. Working stiff : PROLE
George Orwell introduced us to the proles, the working class folk in his famous novel “Nineteen Eighty-Four”. Collectively, the proles made up the section of society known as the proletariat.

55. Banjo accessory : CAPO
A capo is a clamp-like device that is placed around the neck of a guitar to shorten the strings, and hence raise the pitch. The full name, rarely used these days, is “capo tasto”, which is Italian for “head tie”.