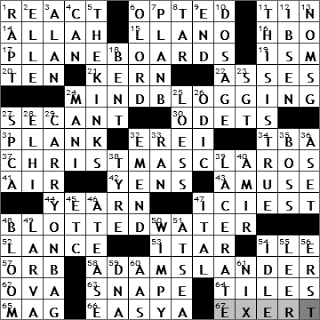 11. Composition of Jack Haley’s Oz character : TIN
Actor Jack Haley is best known for playing the Tin Man in “The Wizard of Oz”. Haley was the second choice for the role, as it was originally given to Buddy Ebsen (who later played Jedd Clampett in “The Beverly Hillbillies”). Ebsen was being “painted up” as the Tin Man when he had an extreme, near-fatal reaction from inhaling the aluminum dust makeup that was being used. When Haley took over, the makeup was changed to a paste, but it was still uncomfortable and caused him to miss the first four days of shooting due to a reaction in his eyes. During filming, Haley must have made good friends with the movie’s star, Judy Garland, as years later Jack’s son married Judy’s son, Liza Minnelli.

16. “Six Feet Under” network : HBO
“Six Feet Under” is reportedly a great TV drama aired on HBO, one that I fully intend to take a look at one day. The “six feet under” is a reference to the show’s storyline which features a family funeral business.

The Federal Aviation Administration was set up in 1958 (as the Federal Aviation Agency). The agency was set up at that time largely in response to an increasing number of midair collisions. The worst of these disasters had taken place two years earlier over the Grand Canyon, a crash between two commercial passenger airplanes resulting in 128 fatalities.

21. Jerome who composed “Ol’ Man River” : KERN
“Ol’ Man River” is a wonderful song by Jerome Kern and Oscar Hammerstein, from the musical “Show Boat”. The most famous performances of the song were by Paul Robeson, starting in 1938 when he appeared in a movie version of the stage show. Over the years Robeson changed the lyrics as he sang it at various recitals. The original words used a lot of racial epithets and stereotypical African American slang that he decided to change or omit.

27. Cosine’s reciprocal : SECANT
The secant (sec, for short) is the ratio of the hypotenuse of a triangle to its adjacent side, and is the reciprocal of the cosine, as we all remember from school …

30. “Waiting for Lefty” playwright : ODETS
“Waiting for Lefty” was the first play by Clifford Odets that made it to stage, in 1935. The storyline deals with cab drivers who are planning a strike. Famously, the play breaks through the “fourth wall” by placing actors within the audience who react to the action taking place on the stage.

A claro is mild cigar made with light-colored tobacco. The name comes from the Spanish for “clear”.

42. Strong desires : YENS
The word “yen”, meaning “urge”, has been around in English since the very early 1900s. It comes from the earlier word “yin” imported from Chinese, which was used in English to describe an intense craving for opium!

48. Cleaned up after a spill? : BLOTTED WATER
From “bottled water”.

52. Tilter’s weapon : LANCE
Tilting is the most recognized form of jousting. Jousting can involve the use of a number of different weapons, but when lances are used, the competition is called “tilting”.

53. ___-Tass news agency : ITAR
TASS is the abbreviation used for the former news agency, the Telegraph Association of the Soviet Union (Telegrafnoye Agentstvo Sovetskovo Soyuza). When the Soviet Union dissolved in 1992, the Moscow-based agency’s scope changed, along with its name. It is now known as the Information Telegraph Agency of Russia (ITAR-TASS).

54. Martinique, par exemple : ILE
The island of Martinique in the eastern Caribbean is actually a part of France, and is referred to as an “overseas department”. As such, Martinique is part of the European Union, and even uses the euro as its currency. The island is fully represented in the French National Assembly and Senate, just like any department within France. It’s sort of like the status of Hawaii within the US.

58. Defamation in the Garden of Eden? : ADAM SLANDER
From “Adam Sandler”.

Adam Sandler’s big break was with “Saturday Night Live”. He then went on to make several successful movies and has his own movie and television production company. Personally, I am not a fan of Adam Sandler, nor his movies …

63. Potter’s potions professor : SNAPE
Severus Snape is a character in the Harry Potter novels, played by the wonderful Alan Rickman on the big screen.

64. Playing pieces in Rummikub : TILES
Rummikub is a game invented in Israel. It was once the country’s leading exported game and indeed was very popular in the US in the late seventies. The game uses elements of rummy, dominoes, mah-jongg and chess. I’ve never played it, but I think I might pick up a set some time soon and try it out …

65. Nat Geo, for one : MAG
The National Geographic Society started as a club for academics and wealthy people interested in travel, founded in 1888 in Washington, D.C. The society’s “National Geographic Magazine” was first published at the end of the same year. I’ve always thought it very cool that the logo of the society (you can see it on the National Geographic cable TV channel) is simply the rectangular yellow frame that appears in the margins around the front cover of the magazine.

2. Vogue competitor : ELLE
“Elle” magazine was founded in 1945 and today has the biggest circulation of any fashion magazine in the world. “Elle” is the French word for “she”.

3. Shepard in space : ALAN
Alan Shepard was the first American in space. Shepard’s flight was originally scheduled for October 1960 but a series of delays pushed it out till May 5, 1961. Yuri Gagarin made his celebrated flight on April 12, 1961, just one one month earlier, winning that part of the Space Race for the Soviets.

4. Pink-slip : CAN
The term “pink slip” can be used as a verb meaning “to terminate an employee”. No one really seems to know for sure where the term originated, but there are lots of stories.

5. “Lola” band : THE KINKS
“Lola” is a fabulous song, written by Ray Davies and released by the Kinks back in 1970. Inspired by a real life incident, the lyrics tell of young man who met a young “lady” in a club, danced with her, and then discovered “she” was actually a transvestite. The storyline isn’t very traditional, but the music is superb.

12. “The Wild Duck” playwright Henrik : IBSEN
Henrik Ibsen was a Norwegian playwright, considered by many to be the greatest playwright since William Shakespeare. He was famous for shocking his audiences by exploring subjects that offended the sensibilities of the day (the late 1800s).

13. Chinese restaurant request : NO MSG
Monosodium glutamate is the sodium salt of a naturally occurring (and non-essential) amino acid, glutamic acid. It is used widely as a flavor enhancer, particularly in many Asian cuisines. Whether or not it is harmful seems to be still under debate. I say it’s not good for you. Something that comes out of test tube shouldn’t be in our food …

Master Sergeant Ernie Bilko was played by Phil Silvers in his TV show aired in the fifties. “The Phil Silvers Show” was hugely successful in reruns in the British Isles, even more so than over here in the US.

Jack Webb played Sergeant Joe Friday on “Dragnet” on both TV and radio … and what a voice! Off the screen Webb was a lover of Jazz, and he played the cornet. It was within the world of Jazz that he met and fell in love with Julie London, the famous singer with the smoky voice. The couple married and had two kids together.

24. Gershwin’s “The ___ Love” : MAN I
George and Ira Gershwin wrote “The Girl I Love” for the musical “Lady Be Good!” only to drop it from the show before it opened. The words were then changed to suit a new title, “The Man I Loved”, and the song was slated for “Strike Up the Band” and “Rosalie”, but again it was dropped from both shows at the last minute. The song was then released as a single, and it became very popular.

25. Windblown soil : LOESS
Loess is a wind-blown accumulation of silt. The word is German in origin and was first used to describe the silt along the Rhine Valley.

26. Keatsian or Pindaric : ODIC
John Keats wrote a whole series of odes in 1819, including the very famous “Ode on a Grecian Urn”, “Ode to Psyche” and “Ode to a Nightingale”.

Pindar was an Ancient Greek poet, best known perhaps for composing a series of Victory Odes that celebrated triumph in competition, most notably the Olympian Games of the day.

27. Pet advocacy org. : SPCA
Unlike in other countries, there is no “umbrella” society in the US for the prevention of cruelty to animals. Rather, there are independent organizations set up all over the nation using the name SPCA. You probably have one nearby. There is an American Society for the Prevention of Cruelty to Animals which was originally intended to operate across the country, but really it is focuses its efforts in New York City.

28. Grades K-12 : ELHI
“Elhi” is an informal word used to describe anything related to schooling from grades 1 through 12, i.e. elementary through high school.

38. One of four on a Rolls : TYRE
Henry Royce founded the Rolls-Royce company in 1904 with his partner, Charles Rolls. Royce died at 70 years of age in 1933. His last words were, reportedly, “I wish I had spent more time in the office” …

40. Mideast potentate: Var. : AMIR
In English, emir can also be written as amir and ameer (watch out for those spellings in crosswords!).

55. Lecher’s look : LEER
The word “lecher”, one who debauches, came into English in the 12th century. The original word in Old French was “lecheor”, literally “licker”.