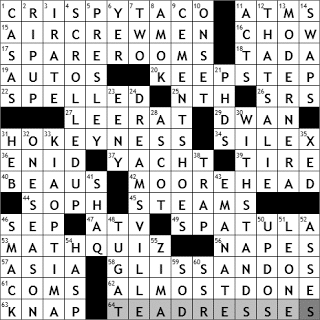 11. Means to ease withdrawals : ATMS
ATMs are Automated Teller Machines, called “cashpoints” in back in Ireland. Well, as students we also called them “drink links”, for obvious reasons.

26. Future alums: Abbr. : SRS
An alumnus (plural … alumni) is a graduate or former student of a school or college. The female form is alumna (plural … alumnae). The word comes into English from Latin, in which alumnus means foster-son or pupil.

29. Allan who directed “Sands of Iwo Jima” : DWAN
Allan Dwan was a very respected, Canadian-born movie director. He developed his reputation in Hollywood directing his fellow Canadian, movie star Mary Pickford, and her husband Douglas Fairbanks. His most successful film was the smash hit “Sands of Iwo Jima” starring John Wayne, released in 1949. Dwan directed his last film in 1961, and passed away in 1981, at the age of 96.

34. Mineral in the form of quartz or flint : SILEX
Silex is a ground stone, nowadays usually limited to finely ground and pure silica. Silex has proved to be very useful over the ages, for example being used as a road surface in Ancient Rome.

36. South-central U.S. city named for a woman in English literature : ENID
The railroad station located in what is now Enid, Oklahoma, back in 1889 was called Skeleton Station. An official who didn’t like the name changed it to Enid Station, using a character in Alfred Lord Tennyson’s “Idylls of the King”.

37. Common St. Tropez sight : YACHT
According to legend, the martyr Saint Torpes was beheaded in the city of Pisa in Italy during the reign of the Emperor Nero. His body was placed in a rotten boat, apparently with a rooster and a dog. The boat landed at the present-day location of St. Tropez, and Saint Torpes gave its name to the city that developed there.

40. About half of all dates : BEAUS
Deb is short for “débutante”, a French word meaning “female beginner”, a young lady making her “debut”. Traditionally the term was reserved for young women of aristocratic families who were newly introduced to society, and who were available for marriage. The male equivalent of a débutante is a “beau”, also a French word.

42. Actress who played Endora on TV’s “Bewitched” : MOOREHEAD
In the television sitcom “Bewitched”, Endora was Samantha’s mother, with both mother, daughter and indeed granddaughter having the magical powers accorded to witches. Endora was played flamboyantly by Agnes Moorehead.

46. ___ 21, Intl. Day of Peace : SEP
September 21 has been designated as the International Day of Peace since 2001, although the day itself was inaugurated in 1981 (then the third Tuesday of each September). There is a Peace Bell in the United Nations that rings out on each Peace Day, a gift from the Diet of Japan. The bell itself was cast from coins donated by children all over the world.

57. Band whose self-titled 1982 album was #1 for nine weeks : ASIA
Asia was one of these “supergroups”, a band composed of musicians from other bands that have already achieved success. The Asia lineup included bandmembers from the groups Yes, Emerson, Lake and Palmer, Roxy Music and the Buggles among others.

58. Dramatic piano effects : GLISSANDOS
In music, a glissando (the plural of which is “glissandi”), is a “glide” from one pitch to another, a rapid “slide” through a series of consecutive notes. On a piano this can be accomplished by swiping a finger across the keys, and on a harp the effect is achieved with a similar action across the strings.

63. Sack starter : KNAP
“Knapsack” is a Low German word for a bag with straps designed to be carried on the back. The word “knapsack” probably comes from the German verb “knappen” meaning “to eat”.

64. Cocktail attire : TEA DRESSES
A tea gown or tea dress was worn at home by women from the late 19th to the mid-20th centuries. I guess it was appropriate attire for both tea and cocktails …

Down
1. They can be made with adobes : CASAS
Adobe has been around a long time, and has been used in dry climates all over the world. The original form of the word “adobe” dates back to Middle Egyptian times, about 2000 BC. The original “spelling” is dj-b-t, and translates as mud (sun-dried) brick.

5. A boulevard in Memphis is named for him : PRESLEY
Elvis Presley was born in Tupelo, Mississippi and moved to Memphis, Tennessee with his family when he was 13-years-old. Once he had achieved fame, he purchased Graceland, the famous Memphis home that he used for himself and his family. I visited it some years ago, well worth the effort I’d say …

6. Saw attachment? : YER
Tom Sawyer is of course a favorite character created by Mark Twain. He turns up in four of Twain’s books:

8. Confusedly : AMOK
The phrase “to run amok” has been around since the 1670s, and is derived from the Malay word for “attacking furiously”, “amuk”. The word “amok” was also used as a noun, to describe Malay natives who were “frenzied”. Given Malayan history, the natives probably had good reason for that frenzy …

11. Book that begins in Jerusalem : ACTS
The Acts of the Apostles is the fifth book of the New Testament.

21. Many academics, for short : PHDS
PhD is an abbreviation for “philosphiae doctor”, Latin for “teacher of philosophy”.

24. Ohio town where “there’s a happiness” in an old Glenn Miller song : DREAMSVILLE

An Ascot tie is that horrible looking (I think!) wide tie that narrows at the neck, only really worn at weddings these days. It takes its name from the Royal Ascot horse race, a day when punters still turn up in formal wear at Ascot race course in England.

31. N.T. book : HEB
The Epistle to the Hebrews is a book in the New Testament, with an unknown author.

41. Nickname for a noted L.S.U. grad : SHAQ
Shaquille O’Neal is one of the heaviest players ever to have played in the NBA (weighing in at around 325 pounds). Yep, he’s a big guy … 7 foot 1 inch. He is also the oldest player active in the NBA today, pushing 40 years old.

51. West African currency : LEONE
The leone is the currency of Sierra Leone. It was introduced in 1964 to replace the British West African pound. The move was a practical one, as the Leone is a decimal currency and replaces the old British system of pounds, shillings and pence.

52. Zebra kin : ASSES
The name “zebra” comes from an old Portuguese word “zevra” meaning “wild ass”. Studies of zebra embryos show that zebras are basically black in color, with white stripes that develop with growth. Before this finding, it was believed they were white, with black stripes.

55. Alcopop brand : ZIMA
Zima is a clear, alcoholic beverage, about the same strength as beer. It is sold in beer bottles but is marketed as “not” a beer. It has a lemon-lime flavor, and is referred to as an alcopop, a portmanteau word from “alcohol” and “pop”.

60. Old atlas letters : SSR
The former Soviet Union was created in 1922, not long after the Russian Revolution of 1917 that overthrew the Tsar. The new Soviet Union was roughly equivalent geographically to the old Russian Empire, and was made up of fifteen Soviet Socialist Republics.