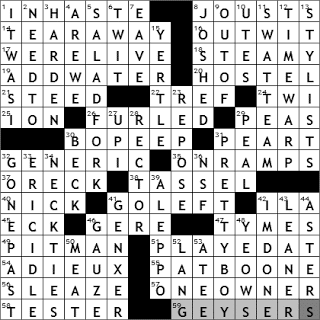 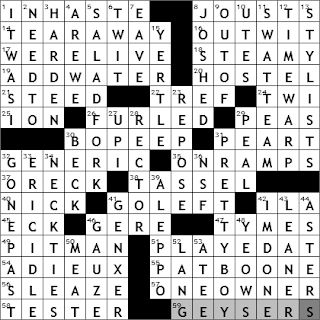 
Today’s Wiki-est, Amazonian Googlies
Across
18. R-rated, maybe : STEAMY
The Motion Picture Association of America’s (MPAA) film-rating system is purely voluntary and is not backed by any law. Movie theaters agree to abide by the rules that come with the MPAA ratings in exchange for access to new movies.

20. Digs for peanuts? : HOSTEL
“Digs” is short for “diggings” meaning “lodgings”, but where “diggings” came from, no one seems to know for sure.

22. Not allowed on certain diets : TREF
According to Jewish dietary law, kosher food is “fit” to eat, and food that is not kosher is called treif (or tref).

25. ___ drive (engine in “Star Wars”) : ION
Ion drives featured in the “Star Wars” series of movies, but actually ion drives (or ion thrusters) aren’t science fiction. Various space agencies have used them since the sixties. Ion drives produce very little thrust but they make very efficient use of the propellant. They are only work in space though, outside of any atmosphere.

29. Green Giant bagful : PEAS
The Jolly Green Giant was introduced by Minnesota Valley Canning in 1925 to help sell the company’s peas. He was named after one of the varieties of pea that the company sold, the “Green Giant”. The Jolly Green Giant first appeared in a television commercial in 1953, walking through a valley with young boys running around at his feet. That first commercial proved to be so scary for younger viewers that it was immediately pulled off the air.

30. She “espied their tails side by side, / All hung on a tree to dry” : BO PEEP
The lines that are most commonly quoted for the rhyme about “Little Bo Peep” don’t actually include the lines cited above:

31. Rush drummer/lyricist Neil : PEART
Rush is a Canadian rock band that has been around since 1968. The band has three members: Geddy Lee, Alex Lifeson and Neil Peart.

37. Hoover rival : ORECK
The Oreck Corporation was named after founder David Oreck, and makes vacuum cleaners and air purifiers. The company started out selling vacuum cleaners by mail, a new concept in 1963. David Oreck appears regularly as a spokesman in the company’s ads and infomercials.

38. It gets a new position upon graduation : TASSEL
Mortarboards, or square academic caps, are associated with school graduations all over the world, although traditions do differ. For example in Ireland (where I come from), mortarboards are only worn by female graduates.

41. Haw : GO LEFT
“Haw!” is a command given to a trained animal that is hauling something (like a horse or an ox). “Haw” is used to instruct the animal ti turn to the left. The equivalent command for a right turn is “Gee!”

46. “Sommersby” star, 1993 : GERE
The 1993 romantic drama “Sommersby” stars Richard Gere and Jodie Foster. It’s all about an imposter who returns after the Civil War and moves in with a woman while claiming to be her husband. The real husband returns, and things get very rancorous. I know it sounds implausible, but the storyline is based on true events that took place in France in the 1500s.

47. Group with the 1963 #1 hit “So Much in Love,” with “the” : TYMES
The Tymes are a vocal soul group from America, who enjoyed just as much success in the UK as they did in the US. The Tymes topped the US charts with “So Much in Love” in 1963, although the song didn’t do at all well in the UK. On the other hand their only other big hit, the 1975 single “Ms Grace”, made it to number one in the UK, and only reached #91 in the US charts.

55. Onetime General Motors spokesman : PAT BOONE
The singer Pat Boone endorsed a lot of products in his career, but he is most associated with his TV spots for Chevrolet in the late fifties and early sixties.

56. Schlock : SLEAZE
Schlock is trash, something shoddy. It comes from the American Yiddish word “shlak”, with the same meaning.

59. Where some jets originate : GEYSERS
The Great Geysir is the first known geyser to have been discovered and documented. The name “Geysir” comes from the Icelandic and Old Norse word “geysa” meaning “to gush”. It is the Great Geysir that gives us our English word “geyser”.

Down
6. Nincompoop : TWIT
The word “nincompoop” meaning an “ass” seems to have been around for quite a while, since the 1670s, but no one appears to know its origins.

“Twit” is a word not used very often here in America. It’s a slang term that used to be quite common in England, meaning someone foolish and idiotic.

10. Uintah and Ouray Reservation tribe : UTES
The Ute are a group of American Indian tribes that now reside in Utah and Colorado. The Ute were not a unified group as such, but rather a loose association of nomadic tribes.

11. Help in a dangerous situation : SWAT TEAM
SWAT is an acronym for Special Weapons and Tactics. The first SWAT team was pulled together in the Los Angeles Police Department in 1968.

“The Rocky Horror Picture Show” has to have the most devout cult following of any movie ever made. Famously, fans attending a midnight show of the film will dress up in the outrageous costumes used in the movie, and bring props with them. The props bear little relation to the storyline, but a tradition of using certain props in a particular way has been established. For example, at one point a character proposes a toast, and the audience throws toast around the theater. Go figure …

15. Blue-backed Dr. Seuss character : YERTLE
“Yertle the Turtle” is a story by Dr. Seuss. The book is noted for the inclusion of the word “burp”, which back in 1958 when it was published, was considered to be vulgar. But, no one seemed to mind!

Dr. Seuss was the pen name of Theodor Seuss Geisel. Geisel was commander of the Animation Department of the USAF during WWII. He was behind many propaganda films including one called “Our Job in Japan”. This propaganda film was used after the war as a basis for the short feature “Design for Death”, a study of Japanese culture released in 1947, and winner of an Oscar for best Documentary.

27. News inits. : UPI
United Press International was one of the biggest news agencies in the world, sending out news by wire to the major newspapers. UPI ran into trouble with the change in media formats at the end of the last century and lost many of its clients as the afternoon newspapers shut down due to the advent of television news. UPI, which once employed thousands of people, still exists but with only a handful of employees.

33. “And Now for Something Completely Different” co-star : ERIC IDLE
Eric Idle was one of the founding members of the Monty Python team. Idle was very much the musician of the bunch, and is an accomplished guitarist. If you’ve seen the Monty Python film “The Life of Brian”, you might remember the closing number, “Always Look on the Bright Side of Life”. It was sung by Idle, and was indeed written by him. The song made it to number 3 in the UK charts in 1991.

34. Haberdashery section : NECK TIES
Back in the 14th century a haberdasher was a dealer in small wares. By the late 1800s, the term had evolved to mean a purveyor of menswear, and in particular was associated with the sale of hats.

36. Univ. research grantor : NSF
The National Science Foundation supports research and education in all scientific fields outside of medicine. The NSF was founded in 1950 during the Truman administration. Today it has a budget of almost 7 billion dollars.

39. Largest city in Syria : ALEPPO
Aleppo is the largest city in Syria and is located not far from Damascus, the nation’s capital. Aleppo owes it size and history of prosperity to its location at the end of the Silk Road, the trade route that linked Asia to Europe (and other locations). The Suez Canal was opened up in 1869 bringing a new route for transport of goods, and so Aleppo’s prosperity has declined over the past one hundred years or so.

41. Millennial’s parent : GEN-XER
The term Generation X originated in the UK, the name of a book by Jane Deverson. Her book detailed the results of a study of British youths in 1964, contrasting their lifestyle to those of previous generations. It was Canadian author Douglas Coupland who was responsible for popularizing the term, with his more successful publication “Generation X: Tales for an Accelerated Culture”. By the latest accepted definition, Gen-Xers were born between 1961 and 1981.

43. “Almost” in horseshoes : LEANER
In the game of horseshoes, a ringer is scored when the tossed shoe lands around the target stake. A leaner is almost as good as a ringer, and is scored when a horseshoe lands upright or leans against the stake.

44. “Wild” flowers in a Sara Teasdale poem : ASTERS
Sara Teasdale was a poet from St. Louis, Missouri, although she spent much of her adult life in New York City. Examples of her most famous poems are “There Will Come Soft Rains” and “I Shall Not Care”. Teasdale committed suicide in 1933 by taking an overdose of sleeping pills.

52. Filmmaker Fritz : LANG
Fritz Lang was an Austrian-born American filmmaker. His masterpiece “Metropolis” was produced in Germany in 1927, a work of science-fiction that explored the struggle between workers and owners in a capitalist society. It was the most expensive silent movie ever made.