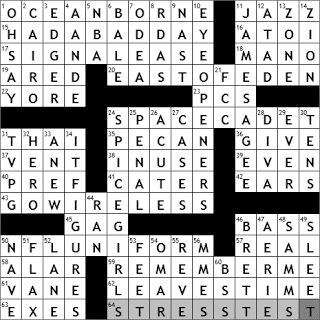 Today’s Wiki-est, Amazonian Googlies
Across
16. Parisian possessive : A TOI
“À Toi” is the French term for “yours”, when talking to someone with whom one is familiar. “À Toi” literally means “to you”.

19. “Wielding ___ Sword” (Piers Anthony novel) : A RED
“Wielding a Red Sword” is a fantasy novel, written by Piers Anthony. It is one of a series called the “Incarnations of Immortality”. Not my cup of tea …

20. Classic novel with biblical parallels : EAST OF EDEN
John Steinbeck considered “East of Eden” his magnus opus. Most of the storyline takes place near Salinas, just south of where I live in the Bay Area. Two of the characters in the story are brothers Cal and Aron, representative of the biblical Cain and Abel.

According to the Book of Genesis in the Bible, after Cain murdered his brother Abel he fled to the Land of Nod, located “east of Eden” (which, by the way, is the source for the title of John Steinbeck’s celebrated novel “East of Eden”).

24. Flake : SPACE CADET
The expression “space cadet” is used to describe someone who is eccentric and disconnected with reality. It may even imply that the person is a user of hallucinogens. The phrase has been around since the sixties, and may be derived from the science fiction TV show “Tom Corbett, Space Cadet” which aired in the fifties.

31. Language with 44 consonants : THAI
Thai is the native language of the Thai people, the predominant ethnic group in Thailand.

46. Sam Adams alternative : BASS
The red triangle on the label of a bottle of Bass Ale was registered in 1875 and is UK Registered Trade Mark No: 00001.

58. Controversial color enhancer : ALAR
The chemical name for Alar, a plant growth regulator and color enhancer, is daminozide. It was primarily used on apples, but was withdrawn from the market when it was linked to cancer.

64. Many a police officer must pass one : STRESS TEST
I think the reference is to the requirement by some police departments that their officers pass cardiac stress tests, rather then a reference to the stress incurred on the job, but I could be wrong …

1. Key starter? : OH SAY
The words “O! say can you see” come from “The Star-Spangled Banner” written by Francis Scott Key. The lyrics were written first as a poem by Key, inspired when he witnessed the bombarding by the British of the American forces at Fort McHenry during the Battle of Baltimore in September 1814. The words were then set to the tune of a popular British drinking song written by John Stafford Smith called “The Anacreontic Song”, with the Anacreontic Society being a men’s club in London.

2. City of a Thousand Minarets : CAIRO
It seems that the whole world these days has eyes on the city of Cairo, the capital of Egypt. It is the largest city on the continent of Africa, and is nicknamed “The City of a Thousand Minarets” because of its impressive skyline replete with Islamic architecture. The name Cairo is a European corruption of the city’s original name in Arabic, “Al-Qahira”.

7. Some ancient halls : ODEA
In Ancient Greece, an odeon was like a small theater, with “odeon” literally meaning a “building for musical competition”. Odea were used in both Greece and Rome, for entertainments such as musical shows and poetry readings.

9. Santa drawer : NAST
Thomas Nast was an American caricaturist and cartoonist. He was the creator of the Republican Party elephant, the Democratic Party’s donkey, Uncle Sam and the image of the plump and jocular Santa Claus that we use today.

11. “Death in the Desert” writer, 1930 : JAMES AGEE
James Agee was a noted, American film critic. He wrote an autobiographical novel “A Death in the Family” that won him his Pulitzer in 1958, albeit posthumously.

14. Utah’s ___ Canyon : ZION
To me, the most spectacular feature of Zion National Park, in southwestern Utah, is the magnificent Zion Canyon. The canyon cuts through red Navajo sandstone, a truly beautiful sight.

21. Grp. caring about airing : FCC
TV broadcasting is monitored by the Federal Communications Commission. The FCC has been around since 1934, when it replaced the Federal Radio Commission.

24. “Wannabe” hitmakers : SPICE GIRLS
The five members of the English pop group the Spice Girls are:

28. Hissy-prone missy : DIVA
“Diva” comes to us from Latin, via Italian. “Diva” is the feminine form of “divus” meaning “divine one”. It is used in Italy to mean goddess, or fine lady, and especially is applied to the prima donna in an opera. We often use the term to describe a singer with a big ego.

31. “Seinfeld” designation : TV-PG
“Seinfeld” aired for nine seasons on NBC, and in 2002 was declared by TV Guide as the “greatest television program of all time”. After the show completed its run in 1998, each of the main supporting actors made failed attempts to launch new sitcoms. This phenomenon became known as “the Seinfeld curse”, but Julia Louis-Dreyfus managed to break free of it with a successful five-season run in “The New Adventures of Old Christine”.

48. “The Colbys” co-star : SAMMS
“The Colbys” was a spin-off of the very successful prime time soap opera, “Dynasty”. Heading the cast of the Colbys was Hollywood great Charlton Heston. The “Dynasty” character Blake Carrington had a daughter who appeared on “The Colbys”, Fallon Carrington Colby, played for two seasons by British actress Emma Samms.

50. Mass gathering place : NAVE
In large, Christian churches, the nave is the main approach to the altar, where most of the faithful are seated.

54. Baseball’s Minaya : OMAR
Omar Minaya was the General Manager for the Montreal Expos and the New York Mets.

55. “Le ___,” Picasso painting of his sleeping mistress : REVE
Picasso’s painting “Le Rêve” depicts his mistress, Marie-Thérèse Walter, sitting in a chair, sleeping (“Le Rêve” is French for “The Dream”). The painting was purchased by casino owner Steve Wynn in 2001. Wynn contracted to sell the painting for $139 million, the most money ever paid for a work of art. He put the painting on display for some friends before he handed it over to its new owner, and while gesticulating as he discussed the work, he put his elbow through the canvas! The six-inch tear necessitated a $90,000 repair, and the sale fell through.

60. First degs. : BSS
My first degree was a bachelor’s in science. As it was awarded in Ireland I have the letters B.Sc. after my name, whereas it would have been B.S. had I earned the degree in the US.