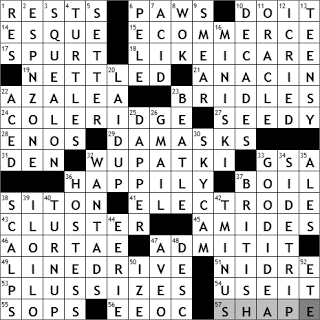 Today’s Wiki-est, Amazonian Googlies
Across
14. It’s like -like : -ESQUE
The suffix -esque came into English from Italian (-esco), which in turn derives from Latin (-iscus).

15. Growing part of the economy : E-COMMERCE
Electronic commerce is definitely a growing sector of the economy. If I have to shop, I do so online if at all possible, rather than getting into the car to go to a store and pay more money.

19. Deviled : NETTLED
One meaning of the verb “devil” is to harass or annoy.

21. Nuprin alternative : ANACIN
Anacin is a pain reliever, with the active ingredients of aspirin and caffeine.

Nuprin is one of the brand names under which the drug ibuprofen is sold. Ibuprofen is a shortened version of the drug’s name Iso-BUtyl-PROpanoic-PHENolic acid. It’s actually an anti-inflammatory, but is good for headaches too apparently.

22. Plant toxic to sheep and goats : AZALEA
Azaleas are very toxic to horses, sheep and goats, but strangely enough cause no problem for cats or dogs. And if you go to Korea you might come across “Tugyonju”, which is azalea wine made from the plant’s blossoms.

24. “Frost at Midnight” poet : COLERIDGE
Samuel Taylor Coleridge wrote a series of eight poems about particular life experiences he had. The works are referred to as his conversation poems, and generally examine the role of nature, and its absence, in his life. The most famous of the set is “Frost at Midnight”, which describes his life as a child at school and his regret that he was not more exposed to the pastoral life.

28. Cabell who was the 1978 N.L. at-bats leader : ENOS
Enos Cabell was a Major League Baseball player who played for most of the seventies and eighties. Sadly, one of his claims to fame is that he was suspended for the entire 1986 season after having admitted cocaine abuse before a grand jury, in the so called “Pittsburgh drug trials”.

29. Byzantine weaving output : DAMASKS
Damask was originally a weaving technique associated with the Byzantine and Islamic weaving centers of the Middle Ages. “Damask” comes from the name of Damascus which was a major trading city at that time.

31. Place to litter : DEN
A wild animal might produce a litter in a den.

32. Arizona national monument with Pueblo ruins : WUPATKI
The Wupatki National Monument is an area containing many Pueblo ruins, located in Arizona not far from the city of Flagstaff.

33. Office of Small Business Utilization agcy. : GSA
The Government’s General Services Administration, as the name suggests, provides general services to other federal agencies. So for example, it manages office space for the other agencies, and transportation.

Within the GSA, the Office of Small Business Utilization has the mission of maximizing the use of small and disadvantaged businesses by the government agencies serviced by the GSA.

45. LSD and others : AMIDES
LSD is short for LySergic acid Diethylamide. A Swiss chemist called Albert Hofmann first synthesized LSD in 1938 in a research project looking for medically efficacious ergot alkaloids. But it wasn’t until some five years later when Hofmann ingested some of the drug accidentally that the psychedelic properties of the drug were discovered. Trippy, man …

51. Kol ___ (Yom Kippur prayer) : NIDRE
Kol Nidre is an unusual prayer in the Jewish tradition, in that it is recited in Aramaic as opposed to Hebrew. It is recited before the evening service begins for Yom Kippur.

55. Bribes : SOPS
Cerberus is a dog with three heads that appears in both Greek and Roman mythology. His job is to guard the gates of Hades and prevent those that have crossed the River Styx from ever escaping. A sop is a piece of food that has been dipped in some liquid, as one might sop a piece of bread in soup. There is an idiomatic expression, “to give a sop to Cerberus”, which means to give someone a bribe, or pay someone not to pursue an inquiry. The idea is that if one could bribe Cerberus, give him a sop to eat, then he would let you pass and escape from Hades.

56. Discrimination fighter: Abbr. : EEOC
Equal Opportunity Employment is a term that has been around since 1964 when the Equal Employment Opportunity Commission was set up by the Civil Rights Act.

Down
1. Flat, e.g.: Abbr. : RES
A flat is a word more commonly used in the British Isles than here. It basically describes an apartment or condominium. The word “flat” is Scottish in origin, in which language it meant a “floor in a house”.

2. Sports-themed restaurant chain : ESPN ZONE
ESPN Zone is a chain of restaurants, albeit a small chain as there are only two of them. The original location was in Baltimore, Maryland but it’s closed now. There is one ESPN Zone in the entertainment complex in Downtown Los Angeles called L.A. Live, and there is another not too far away (that I’ve visited) in Downtown Disney in Anaheim.

5. Passer and blocker’s teammate : SETTER
In volleyball, there are passers, blockers and setters.

6. Santos rookie of 1956 : PELE
Pele is the nickname of Edison de Nascimento, who has gone by the name Pele for most of his life. He is now retired, and for my money was the world’s greatest ever soccer player. He is the only person to have been part of three World Cup winning squads. Pele is a national treasure in his native Brazil.

8. Food is often tossed in it : WOK
Wok is a Cantonese word, the name of the frying pan now used in many Asian cuisines.

11. Very wise one : ORACLE
In Ancient Greece and Rome, an oracle was someone believed to give wise counsel, inspired by the gods. The word “oracle” derives from the Latin “orare” meaning “to speak”, with is the same root for our word “orator”.

12. 1954 Patti Page hit, whose title is sung three times before “Please, don’t go” : I CRIED
Patti Page is the stage name of Clara Ann Fowler, the best-selling female artist in the 1950s. Patti Page’s signature song is “Tennessee Waltz”, a big hit for her that spent 13 weeks at number one in the charts in 1950. She also had a number one with “(How Much Is That) Doggie in the Window” in 1953.

23. Memorable J.F.K. arrival : BEATLE
The Beatles were already a huge commercial success by the time they set off on their first US tour in 1964. The band left Heathrow airport outside London, waved off by about 4,000 screaming fans. They landed at New York’s JFK Airport and were greeted by another vociferous mob, this time of about 3,000 people. Two days later they made their first live appearance on American television, on “The Ed Sullivan Show”. About 74 million people watched, which back then was over 40% of the American population!

26. Priority Inbox offerer : GMAIL
I use Gmail for almost all my email needs, and find it to be the best of the free services, and better than the pay service I had for many years. Gmail “learns” what is important in your inbox and as emails arrive it places what it calls Priority Inbox emails at the top of the list.

30. Overhead shooter : SKYCAM
Skycam is a brand name, which now tends to be used generically. It refers to that TV camera mounted on cables over say a football field that allows for some very cool shots as the camera seems to swoop down to the play to follow the action, almost like it’s part of a video game.

39. Port on the Panay Gulf : ILOILO
Iloilo City is the capital of the Iloilo province in the Philippines, and is known as one of the most desirable places to live in the country.

42. Countdown term : T-MINUS
We’re all familiar with the expression “T-minus …” in the countdown to the takeoff of a rocket, but do we know that the “T” stands for? The common answers given are “time” and “take off”, but it turns out that neither is correct. The expression originated in the early days of the space program and was used then not for launches but as a countdown to various “tests”. So the “T” stands for “test”, but it’s usage carried over into the actual launches themselves.

47. Chevy model : AVEO
The Chevrolet Aveo is a subcompact that has been around since 2002. It is manufactured by GM Daewoo, the GM subsidiary in South Korea. By the way, GM Daewoo is the third largest manufacturer of automobiles in South Korea, after Hyundai and Kia.

52. Côte d’Ivoire’s rainy season : ETE
The Republic of Côte d’Ivoire is located in West Africa on the Gulf of Guinea. The country is often, mistakenly, referred to as the Ivory coast, the direct translation from the French. The official language of the country is French, as for many years it was a French colony.

The rainy season in West Africa is the summer (été in French).