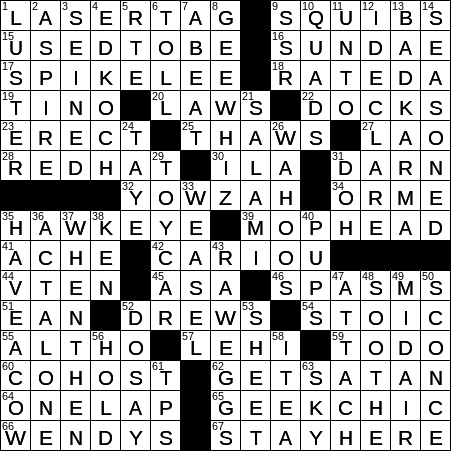 Today’s Wiki-est, Amazonian Googlies
Across
1. War game : LASER TAG
The name “Laser Tag” is really a misnomer as lasers are rarely used in the game. The “guns” actually send out infrared light, and not laser light, which is picked up by infrared detectors worn by the players.

9. Short write-ups : SQUIBS
A “squib” is short and humorous piece in a newspaper or magazine. The term might possible be imitative of the small firework called a squib, as a newspaper’s squib might be intended to ignite thinking and discourse.

16. Treat eaten with a spoon : SUNDAE
There’s a lot of speculation about how the dessert called a sundae got its name, but there seems to be agreement that it is an alteration of the word “Sunday”.

17. 2007 N.A.A.C.P. Image Award winner for “Inside Man” : SPIKE LEE
Film director Spike Lee was born in Atlanta, Georgia but has very much made New York City his home and place of work. Most of Lee’s films are set in New York City, including his first feature film, “She’s Gotta Have It”. That film was shot over two weeks, with a budget of $175,000. “She’s Gotta Have It” grossed over $7 million at the US box office.

19. Baseball’s Martinez : TINO
First baseman Tino Martinez has retired from Major League Baseball. Martinez played for a number of teams including the Mariners, Yankees, Cardinals and Devil Rays. Martinez was born and raised in Tampa, Florida and as a boy he worked in his father’s cigar factory.

23. Like a zebra’s mane : ERECT
The name “zebra” comes from an old Portuguese word “zevra” meaning “wild ass”. Studies of zebra embryos show that zebras are basically black in color, with white stripes that develop with growth. Before this finding, it was believed they were white, with black stripes.

25. Détentes : THAWS
“Détente” is a French word meaning “loosening, reduction in tension” and in general it is used to describe the easing of strained relations in a political situation. In particular, the policy of détente came to be associated with the improved relations between the US and the Soviet Union in the seventies.

27. Language traditionally written without spaces between words : LAO
Lao is the official language of Laos. Lao is also spoken in the northeast of Thailand, but there the language is known as Isan.

34. “Her ___” (“Miss Saigon” song) : OR ME
“Miss Saigon” is a musical that premiered in London in 1989, and one that is based on Puccini’s opera “Madame Butterfly”. “Miss Saigon” was written by Claude-Michel Schönberg and Alain Boublil, the duo responsible for “Les Misérables”. We saw both shows in London during their heyday, and I much preferred “Miss Saigon”. Back then the big thing was to have a big “special effect” in a stage musical, and for “Miss Saigon” this is the landing of a life-size helicopter on the stage. At the performance we attended there was an announcement that “the helicopter was broken”, so we had a fun time watching actors running around pretending there was a helicopter in that climactic scene …

35. Resident of the Corn State : HAWKEYE
Iowa is nicknamed the Hawkeye State in honor of Chief Black Hawk, a leader of the Sauk people during the War of 1812 and the Black Hawk War.

39. Challenge for a barber : MOP HEAD
Our term “barber” comes to us via Anglo-French from the Latin “barba” meaning “beard”. Barbers originally offered a wide range of services, including surgery. Henry VIII restricted barbers to just haircutting … and dentistry!

42. 1973 Tony nominee for “A Little Night Music” : CARIOU
Len Cariou is a Canadian actor, famous for his Broadway portrayal of “Sweeney Todd”. I most recognize him from supporting roles in “Flags of Our Fathers” and “Thirteen Days”, two great movies.

44. Power-packed engine : V-TEN
The engine known as a V10 is configured with two rows of five cylinders mounted on a crankcase. The rows of cylinders are offset from each other around the crankshaft at right angles, or perhaps a little less. This arrangement of ten cylinders in a V-shape gives rise to the name “V10”.

51. The end of Caesar? : -EAN
The story that Julius Caesar was born via a Caesarean section seems be unfounded. Although such procedures were indeed carried out in Ancient Rome, there are no reports of the mother surviving (and Julius Caesar’s mother did raise her child).

52. Barrymore and more : DREWS
Drew Barrymore has quite the pedigree, being a granddaughter of Hollywood icon John Barrymore. She appeared in her first movie at the age of five, in 1980’s “Altered States”, but her big break was in 1982’s “E.T. the Extra-Terrestrial”. That same year she became the youngest host of “Saturday Night Live” at the age of seven. She has been invited back to host the show quite a few times and has now hosted six times, more than any other female celebrity.

54. Not easily moved : STOIC
Zeno of Citium was a Greek philosopher famous for teaching at the Stoa Poikile, the “Painted Porch”, located on the north side of the Ancient Agora of Athens. Because of the location of his classes, his philosophy became known as stoicism (from “stoa”, the word for “porch”). And yes, we get our adjective “stoic” from the same root.

57. City on Utah Lake : LEHI
The Utah city of Lehi was first settled in 1851. The settlement grew rapidly and was incorporated in the second year of its existence, in 1852. The name Lehi was chosen after a prophet in the Book of Mormon.

Down
3. Netted, in a way : SEINED
A seine is a type of fishing net. It is long and thin, with floats along one long edge (the top) and weights along the bottom edge so that it hangs down in the water. A seine is usually paid out into the water from a boat called a seiner, as the vessel moves slowly in a circle driving fish into the center of the net.

4. Key figure in saving New York City from bankruptcy : ED KOCH
Ed Koch was a Democratic Representative in the US Congress from 1969-73, and then Mayor of New York City from 1978-89. From 1997 to 1999 Koch was a “judge” on the TV show “The People’s Court”. And in 2004, he collaborated with his sister Pat Koch, and wrote a children’s book called “Eddie, Harold’s Little Brother”, a tale about Ed’s own childhood experiences.

10. Squats strengthen them : QUADS
The quadriceps femoris is the muscle group at the front of the thigh. It is the strongest muscle in the human body, and is also the leanest. The “quads” are actually a group of four muscles in the upper leg, hence the use of the prefix “quad-”.

11. “___ a broken heart”: Dickinson : UNTO
Emily Dickinson wrote nearly 1800 poems in her lifetime, with less than a dozen published before she died in 1886. Emily’s younger sister discovered the enormous collection, and it was published in batches over the coming decades.

13. Just deserts for misconduct : BAD KARMA
Karma is religious concept with its basis in Indian faiths. Karma embraces the notion of cause and effect. Good deeds have good consequences at some later point in one’s life, future life, or afterlife and vice versa.

The phrase “just deserts” describes something which is deserved, and in today’s usage that can be something good or bad. The expression has been around a long time, and back in the 14th century it only applied to something bad. I guess the idea is that someone doing something unacceptable got his “just deserts”, the dry and barren expanses fitting to the deed. Over time, the pronunciation of “deserts” changed, with the emphasis on the second syllable, like our word “desserts”. The correct phrase is still spelled “just deserts”, but it is pronounced “just desserts”. As a result, many believe that the phrase is in fact spelled “just desserts”, meaning is one is getting what one deserves, sweet endings to one’s meals, as it were. But no, one is getting a dry and arid expanse that sounds like something sweet to eat.

21. Part of many a submarine : SALAMI
Salame (note the “e” at the end) is an Italian sausage that is traditionally associated with the peasant classes. The meat in the sausage is preserved with salt, and it can be hung and stored for as long as ten years. The name “salame” comes from “sale”, the Italian word for salt, and “-ame”, a suffix indicating a collective noun. Our English word “salami” is actually the Italian plural for “salame”.

24. “Rent” actor Diggs : TAYE
Taye Diggs is an actor most associated with the Broadway show “Rent”, in which he played the nasty landlord Benny. He then co-starred on the television show “Private Practice”. Diggs given name is “Scott”, and the nickname “Taye” comes from saying the given name as “Scottay”.

The musical “Rent” by Jonathan Larson is based on the Puccini opera “La bohème”. “Rent” tells the story of struggling artists and musicians living in the Lower East Side of New York, and is set against the backdrop of the AIDS epidemic. We saw “Rent” on Broadway quite a few years ago and we were very disappointed …

31. “How stupid am I!” : D’OH!
“The Simpsons” is one of the most successful programs produced by the Fox Broadcasting Company. Homer Simpson’s catchphrase is “D’oh!”, which became such a famous exclamation that it has been included in the Oxford English Dictionary (OED) since 2001. “D’oh!” can be translated as “I should have thought of that!”

35. Flip : HAVE A COW
The phrase “don’t have a cow” originated in the fifties, a variation of the older “don’t have kittens”. The concept behind the phrase is that one shouldn’t get worked up, it’s not like one is giving birth to a cow.

38. Perception : KEN
“Ken” is a noun meaning “understanding, perception”. One might say, for example, “half the clues in Saturday’s crossword are beyond my ken, beyond my understanding”.

48. Palliate : SOOTHE
To “palliate” is to relieve the symptoms of a disease or disorder, without effecting any form of a cure. “Palliate” comes from the Latin “palliatus” meaning “cloaked”.

50. Keeper of the flame? : SCONCE
A sconce is a light fixture that today uses electric bulbs, but in the past used candles and torches. The defining feature of a sconce is that it is supported by a wall and does not have a base that stands on the ground. Usually the light is indirect, projected upwards towards the ceiling.

61. Covers with some rolls : TPS
TP’ing (toilet papering) is a prank involving the covering of some object or location with rolls and rolls of toilet paper. If you live in Texas or Minnesota, that little “prank” is legal, but if you live here in California it is classed as mischief or vandalism.