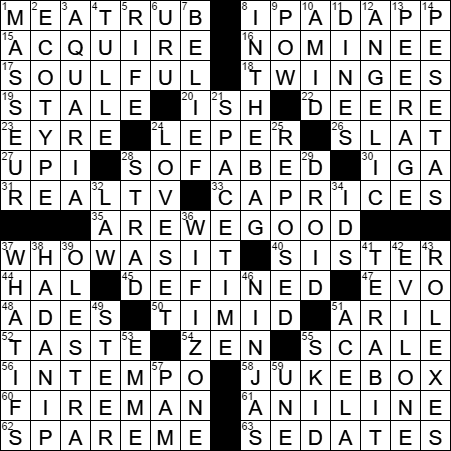 22. Company with a buck in its logo : DEERE
John Deere invented the first commercially successful steel plow in 1837. Prior to Deere’s invention, farmers used an iron or wooden plow that constantly had to be cleaned as rich soil stuck to its surfaces. The cast-steel plow was revolutionary as its smooth sides solved the problem of “stickiness”. The Deere company that John founded uses the slogan “Nothing Runs Like a Deere”, and has a leaping deer as its logo.

23. Literary character self-described as “poor, obscure, plain and little” : EYRE
Jane Eyre is a celebrated novel written by Charlotte Brontë, under the pen name Currer Bell. Over the years, I’ve shared here on my blogs that the “Jane Eyre” story line is a little too dark and Gothic for my taste, but a very persuasive blog reader convinced me to look more at the romantic side of the story and give it a second chance. I watched a wonderful 4-hour television adaptation of the novel made by the BBC a while back and I have to say that because I was focused on the relationship between Jane and Rochester, I was able to push past the Gothic influences (that depress me) so I really enjoyed the story. I thoroughly recommend the 2006 BBC adaptation to fans of the novel.

24. Ostracized sort : LEPER
The horrible disease known as leprosy is also called Hansen’s disease, named after the Norwegian physician famous for isolating the bacterium that causes the disease. We can use the term “leper” to mean someone in general who is shunned by society.

The practice of ostracism, freezing out or exclusion, dates back to Ancient Greece. Back then citizens could write the names of men they thought were exceptionally dangerous on tiles that were publicly posted, resulting in a banishment of ten years. “Ostracize” derives from the Greek “ostrakon”, the word for a “tile”.

26. Plane wing part : SLAT
In an airplane wing, a slat is a moving surface on the leading edge of the wing, primarily having the same effect as the flap on the trailing edge. With slats and flaps deployed, a plane can fly more slowly, and take off or land in a shorter distance.

27. Inits. after a big media merger of 1958 : UPI
Founded in 1958, United Press International (UPI) used to be one of the biggest news agencies in the world, sending out news by wire to the major newspapers. UPI ran into trouble with the change in media formats at the end of the twentieth century and lost many of its clients as the afternoon newspapers shut down due to the advent of television news. UPI, which once employed thousands, still exists today but with just a handful of employees.

30. Alternative to Food Lion or Piggly Wiggly : IGA
IGA stands for Independent Grocers Alliance, a chain of supermarkets that extends right around the world. IGA’s headquarters is in Chicago. The company uses the slogan “Hometown Proud Supermarkets”.

31. 1990s “caught on tape” series : REAL TV
“Real TV” is a reality television series that aired originally from 1966 to 2001. The show featured amateur video clips of various dramatic events that could hold the viewer’s attention.

44. Roach of old comedy : HAL
Hal Roach was a film and television producer who is best remembered for producing the “Laurel Hardy” films, and well as the “Our Gang” and “ The Little Rascals” series of movies.

51. Seed coat : ARIL
The casing surrounding many seeds is called the aril, and it may be quite fleshy. This fruit-like characteristic makes it desirable as a food and aids in the dispersion of the seeds.

54. Tranquil and minimalistic : ZEN
Zen is a Buddhist school that developed its own tradition in China back in the 7th century AD. Zen is a Japanese spelling of the Chinese word “chan”, which in turn derives from the Sanskrit word “dhyana” meaning “meditation”.

58. Something to pick a number from : JUKEBOX
Although coin-operated music players had been around for decades, the term “jukebox” wasn’t used until about 1940. “Jukebox” derives from a Gullah word, the language of African Americans living in the coastal areas of South Carolina and Georgia. In Gullah, a “juke joint”, from “juke” or “joog” meaning “rowdy, wicked”, was an informal establishment where African Americans would gather and for some music, dancing, gambling and drinking. The coin-operated music players became known as “jukeboxes”.

61. Synthetic dye compound : ANILINE
Aniline is a relatively simple organic compound. Hopefully aniline’s strong smell warns one to stay away, as it is a poison.

Down
2. Subspecies of a distinct geographical variety : ECOTYPE
In evolutionary terms, an ecotype or ecospecies is a subspecies that becomes a variety distinct from the main population as it adapts to specific environmental conditions. For example, there are two ecotypes of reindeer. The tundra reindeer migrates between two environments as the weather changes with the seasons, whereas the woodland reindeer remains in the forest year-round.

6. Latin American soccer powerhouse: Abbr. : URU
Uruguay won the soccer gold medals at both the 1924 and 1928 Olympic tournaments. When Jules Rimet, the president of soccer’s international governing body decided to start an international tournament outside of the Olympics, it was decided to give Uruguay the honor of hosting the first competition, in 1930. Sure enough, Uruguay emerged victorious as the first World Cup winners.

11. Banquets : DINES
A banquet is an elaborate feast. “Banquet” is a term that seems to have reversed in meaning over time. Coming into English via French from Old Italian, “banquet” is derived from “banco” meaning “bench”. The original “banco” meal was simply a snack eaten on a bench, rather than at a table.

14. Pre-euro money : PESETAS
The peseta is the former currency of Spain, replaced by the euro in 2002.

21. What a wormhole is a tunnel in : SPACE-TIME
A wormhole is a theoretical shortcut that connecting two points in the space-time continuum. Got that …?

24. Court blowout : LOVE SET
In tennis, a love set is one that is won without one’s opponent winning a game.

28. Pricey strings : STRAD
Generations of the Stradivari family produced violins, the most famous of which were constructed by Antonio Stradivari.

29. iPhone rival : DROID
The Droid is a smartphone from Motorola that runs on Google’s Android operating system.

32. Brief topic : LAW
In law, a “brief” is a written argument submitted to a court. The term ultimately derives from the Latin “brevis” meaning “short”.

36. Hot spot : WI-FI ZONE
“Wi-Fi” is nothing more than a trademark, a trademark registered by an association of manufacturers of equipment that use wireless LAN (Local Area Network) technology. A device labeled with “Wi-Fi” has to meet certain defined technical standards, basically meaning that the devices can talk to each other. The name “Wi-Fi” suggests “Wireless Fidelity”, although apparently the term was never intended to mean anything at all.

39. Ingredient in Pringles Light : OLESTRA
Olestra is a fat substitute. Naturally-occurring fats are made of of a glycerol molecule holding together three fatty acids. Olestra is made of a sucrose molecule, holding together several fatty acids. Olestra has a similar taste and consistency as natural fat, but has zero caloric impact because it is too large a molecule to cross the intestinal wall and passes right through the body. Personally, I steer clear of it. It is banned in Britain and Canada due to concerns about side effects, but I guess someone knows the right palms to grease (pun intended!) here in America, so it’s in some of our “low fat” food.

43. Wearable status symbols : ROLEXES
My most prized possession is a beautiful stainless steel Rolex watch that my uncle bought while serving with the RAF in Canada during WWII. Rolex watches were made available to the Canadian servicemen at that time as they were shipping overseas. My uncle brought his Rolex home to Ireland after the war. He needed money for booze one weekend and so sold the watch to my Dad, for five pounds. My Dad gave it to me just before he died, as he knew I loved the watch, and my brothers weren’t interested in it all. Not so long ago I had the watch appraised ($3,000), and my brothers suddenly took a liking to it! Still, it’s not something that will ever be sold, that’s for sure …

46. Stealth fighters : NINJAS
The ninjas were around in Japan at the time of the samurai, but were a very different type of warrior. The ninjas were covert operatives, specializing in the use of stealth to accomplish their missions. As they were a secretive cadre they took on a mystical reputation with the public, who believed they had the ability to become invisible or perhaps walk on water.

51. Express starting in 2000 : ACELA
The Acela Express is the fastest train routinely running in the US, getting up to 150 mph at times. The service runs between Boston and Washington D.C. via Baltimore, Philadelphia and New York. Introduced in 2000, the brand name “Acela” was created to evoke “acceleration” and “excellence”.

53. Model who wrote the 1996 book “True Beauty” : EMME
Emme is the highest paid plus-size model in the world. Emme’s real name is Melissa Aronson, and she was born in New York City and raised in Saudi Arabia.

57. Grocery brand that’s also a girl’s name : PAM
PAM cooking oil was introduced in 1961 by Leon Rubin and Arthur Meyerhoff. The name “PAM” is an acronym … standing for “Product of Arthur Meyerhoff”. Who’d a thunk it …?