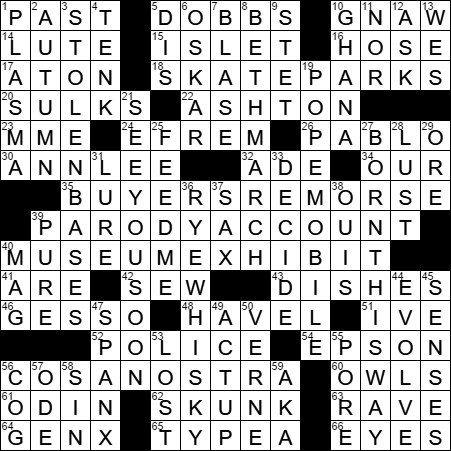 Today’s Wiki-est, Amazonian Googlies
Across
5. Lou who wrote “Exporting America” : DOBBS
The journalist Lou Dobbs came to prominence as the anchor of the popular CNN business show “Lou Dobbs Tonight” which ran from 1980 to 2009. Apparently at one point, Dobbs was considering a run for the office of US President or a run for one of the US Senate seats for New Jersey.

14. Instrument with a bent neck : LUTE
The lute is a stringed instrument with a long neck and usually a pear-shaped body. It is held and played like a guitar, and was popular from the Middle Ages right through to the late Baroque era. A person who plays the lute can be referred to as a “lutenist”.

15. Key : ISLET
A “key” (also “cay”) is a low island offshore, as in the Florida Keys. Our term in English comes from the Spanish “cayo” meaning “shoal, reef”.

22. Family name in Sir Walter Scott’s “The Bride of Lammermoor” : ASHTON
“The Bride of Lammermoor” is an 1819 novel by Scottish author Sir Walter Scott. The novel deals with a doomed love affair between Lucy Ashton and her family’s enemy Edgar Ravenswood. The story is set in the Lammermuir Hills of southeast Scotland, hence the title. Even though the novel is now attributed to Scott, it was first published anonymously.

24. Zimbalist of old TV : EFREM
I used to watch “77 Sunset Strip” as a lad growing up in Ireland. It is an American show that ran from 1958 to 1964. Two of the central characters are former government secret agents, now working as private detectives. Efrem Zimbalist, Jr. plays Stu Bailey, and Roger Smith plays Jeff Spencer. And who can forget Kookie, played by Edd Byrnes? Years later, Byrnes played smooth-talking TV dance show host Vince Fontaine in the 1978 movie “Grease”.

26. One of the renters in Steinbeck’s “Tortilla Flat” : PABLO
“Tortilla Flat” was the first of John Steinbeck’s novels to become a commercial success, published in 1935. The novel was made into a film of the same name in 1942 starring Spencer Tracy and Hedy Lamarr (with Akim Tamiroff playing Pablo).

30. Founder of the American Shakers : ANN LEE
Mother Ann Lee was the leader of the Shakers, the familiar name for the United Society of Believers in Christ’s Second Appearing. Lee was born and raised in Manchester, England. It was there that she became prominent as a speaker declaring faith in the second coming of Christ. She took a band of her followers to America in 1774 and eventually settled just outside Albany, New York.

39. @fakechucknorris, for one : PARODY ACCOUNT
Chuck Norris is a martial artist and an actor from Ryan, Oklahoma. Norris’s first real exposure to martial arts was in the US Air Force when he was serving in South Korea. When he left the service Norris opened up a chain of karate schools, and among his clients were Steve McQueen and his son, as well as Donny and Marie Osmond.

46. Painter’s primer : GESSO
“Gesso” is the Italian word for “chalk” and gives its name to the powdered calcium carbonate that is used as a primer coat under artistic panel paintings. The gesso is mixed with a glue and applied to wood so that it acts as an absorbent surface for paint.

54. Ricoh rival : EPSON
Seiko Epson is a Japanese company, one of the largest manufacturers of printers in the world. The company has its roots in the watch business, roots that go back to 1942. Seiko was chosen as the official timekeeper for the 1964 Summer Olympics in Tokyo and was asked to supply a timer that produced a printed record. This request brought Seiko into the business of printer production. The company developed the world’s first mini-printer for the 1964 Games and called it EP-101 (EP standing for Electronic Printer). In 1975 Seiko introduced the next generation of EP printers which was called EPSON, from “SON of EP”. Cute, huh?

56. They’re “family” : COSA NOSTRA
Apparently “Cosa Nostra” is the real name for the Italian Mafia. “Cosa Nostra” translates as “our thing” or “this thing of ours”. The term first became public in the US when the FBI managed to turn some members of the American Mafia. The Italian authorities established that “Cosa Nostra” was also used in Sicily when they penetrated the Sicilian Mafia in the 1980s. The term “mafia” seems to be just a literary invention that has become popular with the public.

61. God for whom a weekday is named : ODIN
“Wotan” is an alternative (High German) spelling of the name Woden, the Anglo-Saxon version of the Norse god Odin. Wotan is the head god in the pagan tradition, but as paganism was gradually replaced by Christianity in the 7th and 8th centuries, Wotan moved from his place in religion and into the realm of folklore. Indeed, he is a precursor of our modern day Father Christmas. Wotan (Woden) also gave his name to Wednesday, Woden’s Day …

64. Like high school and college students of the ’80s-’90s, e.g. : GEN-X
The term Generation X originated in the UK where it was the name of a book by Jane Deverson. Her book detailed the results of a study of British youths in 1964, contrasting their lifestyle to those of previous generations. It was Canadian author Douglas Coupland who was responsible for popularizing the term, with his more successful publication “Generation X: Tales for an Accelerated Culture”. By the latest accepted definition, Gen-Xers were born between 1961 and 1981.

65. Competitive and outgoing, say : TYPE A
The Type A and Type B personality theory originated in the fifties. Back then, individuals were labelled as Type A in order to emphasize a perceived increased risk of heart disease. Type A personality types are so called “stress junkies”, whereas Type B types are relaxed and laid back. But there doesn’t seem to be much scientific evidence to support the linkage between the Type A personality and heart problems.

Down
1. Bank deposit : PLASMA
Plasma (sometimes “plasm”) is the clear, yellow-colored liquid component of blood and lymph in which cells are suspended.

5. Slam : DIS
“Dis” is a slang term meaning “insult” that originated in the eighties. It is a shortened form of “disrespect” or “dismiss”.

6. Title role in a 1993 film … which sounds like a prize the film won : OSKAR
Oskar Schindler is the protagonist in the Steven Spielberg movie “Schindler’s List”. Schindler was a real person who survived WWII. During the Holocaust, Schindler managed to save almost 1,200 Jews from perishing by employing them in his factories. After the war, Schindler and his wife were left penniless having used his assets to protect and feed his workers. For years the couple survived on the charity of Jewish groups. Schindler tried to make a go of it in business again but never had any real success. He died a pauper in 1974 in Hildesheim, not far from Hanover. His last wish was to be buried in Jerusalem. Schindler was the only former member of the Nazi Party to be buried on Mount Zion.

7. Unimpressed : BLASE
“Blasé”, meaning “nonchalant, bored from overindulgence” comes from French, in which language it can mean “satiated”.

8. Character who dies at the end of “Little Women” : BETH MARCH
“Little Women” is a novel written by American author Louisa May Alcott. The quartet of little women is Meg, Jo, Beth and Amy March. Jo is a tomboy and the main character in the story, and is based on Alcott herself.

9. Editorial reversal : STET
“Stet” is a Latin word meaning “let it stand”. In editorial work, the typesetter is instructed to disregard any change previously marked by writing the word “stet” and then underscoring that change with a line of dots or dashes.

10. Burkina Faso neighbor : GHANA
The name “Ghana” means “warrior king” in the local language. The British established a colony they called Gold Coast in 1874, later to become Ghana, as part of the scramble by Europeans to settle as much of Africa as they could. One of Ghana’s most famous sons is Kofi Annan, the diplomat who served as General Secretary of the UN for ten years until the beginning of 2007.

19. The first one was a modified Ford D-Series truck : POPEMOBILE
The “popemobile” is actually a whole series of vehicles used since the days of Pope John Paul II. The popemobiles used on foreign visits are often manufactured locally and then stay in the country after the visit has been concluded. The British-built popemobile used for a 2006 visit to the UK was ultimately sold for over $70,000 at auction.

27. Grammy-nominated 2011 Lady Gaga album : BORN THIS WAY
Lady Gaga is the stage name of Stefani Germanotta. Germanotta is a big fan of the band Queen, and she took her stage name from the marvelous Queen song titled “Radio Ga Ga”.

28. Aphrodisia : LUST
The word “aphrodisiac” is used for something that imbues sexual excitement. The word is derived from the “Aphrodite”, the Greek goddess of love and beauty.

50. Author with a restaurant at the Eiffel Tower named for him : VERNE
Jules Verne really was a groundbreaking author. Verne pioneered the science fiction genre, writing about space, air and underwater travel, long before they were practical and proved feasible. Verne is the second-most translated author of all time, with only Agatha Christie beating him out.

53. Like Hansel and Gretel in the forest : LOST
“Hansel and Gretel” is a Germanic fairy tale found in the collection of the Brothers Grimm. It tells of two siblings, Hansel and Gretel, the children of a woodcutter. The youngsters are abandoned in a forest at the behest of an evil stepmother. Clever Hansel hears of the plan and leaves a trail of pebbles so that he and his sister can find their way home, which they do. But the children are abandoned again and this time leave a trail of breadcrumbs. Unfortunately, the crumbs are eaten by birds and so the children do indeed become lost. But eventually they do all live happily ever after …