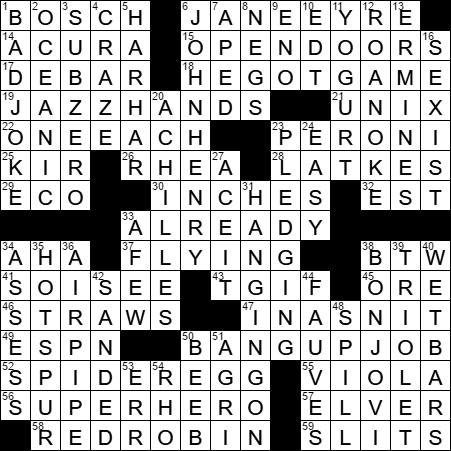 Today’s Wiki-est, Amazonian Googlies
Across
1. “The Haywain Triptych” painter : BOSCH
Hieronymus Bosch was a Dutch painter who worked late 15th and early 16th centuries. Perhaps his most recognized work is his triptych titled “The Garden of Earthly Delights”.

6. Classic novel written under the nom de plume Currer Bell : JANE EYRE
Jane Eyre is a celebrated novel written by Charlotte Brontë, under the pen name Currer Bell. Over the years, I’ve shared here on my blogs that the “Jane Eyre” story line is a little too dark and Gothic for my taste, but a very persuasive blog reader convinced me to look more at the romantic side of the story and give it a second chance. I watched a wonderful 4-hour television adaptation of the novel made by the BBC a while back and I have to say that because I was focused on the relationship between Jane and Rochester, I was able to push past the Gothic influences (that depress me) so I really enjoyed the story. I thoroughly recommend the 2006 BBC adaptation to fans of the novel.

14. Its logo consists of a pair of calipers in an oval : ACURA
Acura is a division of the Honda Motor Company, its luxury brand. As an aside, Infiniti is the equivalent luxury brand for the Nissan Motor Company, and Lexus is the more luxurious version of Toyota’s models.

18. 1998 Spike Lee movie : HE GOT GAME
“He Got Game” is a movie written and directed by Spike Lee, released in 1998. It is a sports drama about a high school basketball player, with a father in prison played by Denzel Washington.

21. System developed by Bell Labs : UNIX
Unix is a computer operating system that was developed at Bell Labs in 1969. The initial name for the project was Uniplexed Information and Computing Service (Unics), and this evolved over time into “Unix”.

23. Italian brewery since 1846 : PERONI
The Peroni Brewery is based in Rome, although it was founded in Vigevano in Lombardy in 1846. Outside of Italy, Peroni is particularly popular in the UK.

25. Wine aperitif : KIR
Kir is a French cocktail, made by adding a teaspoon or so of creme de cassis (blackcurrant liqueur) to a glass, and then topping it off with white wine. The drink is named after Felix Kir, the Mayor of Dijon in Burgundy, who used to offer the drink to his guests. My wife (expensive tastes!) is particularly fond of a variant called a Kir Royale, in which the white wine is replaced with champagne.

26. Sister and wife of Cronus : RHEA
In Greek mythology Rhea was one of the Titans. She was the sister and husband of Cronus, and together they had six children, the last of which was Zeus. Cronus swallowed all of his children as soon as they were born, except for Zeus, who Rhea managed to hide from her husband.

28. Dish often served with applesauce : LATKES
A latke is a delicious potato pancake (I’m Irish … so anything made with potato is delicious!).

43. A cry of relief : TGIF
“Thank God It’s Friday” (TGIF) is a relatively new expression that apparently originated in Akron, Ohio. It was a catchphrase used first by disk jockey Jerry Healy of WAKR in the early seventies. That said, one blog reader wrote me to say that he had been using the phrase in the fifties.

55. It may be used by a person who is bowing : VIOLA
The viola looks like and is played like a violin, but is slightly larger. It is referred to as the middle voice in the violin family, between the violin and the cello.

57. Young migratory fish : ELVER
An elver is a young eel.

58. Harbinger of spring : RED ROBIN
The American robin has a reddish-orange breast. This coloring gave the bird its name, due to the similarity to the European robin. The two species are not in fact related. It is the American robin that famously lays light-blue eggs.

Down
9. “Another Day on Earth” musical artist : ENO
Brian Eno is a musician, composer and record producer from England who first achieved fame as the synthesizer player with Roxy Music. As a producer, Eno has worked with David Bowie, Devo, Talking Heads and U2.

12. Lost Colony’s island : ROANOKE
Roanoke Island is in modern-day North Carolina. It was settled in the late 1500s by an expedition financed by Sir Walter Raleigh. The final group of colonists that were landed in Roanoke were left there for three years without resupply from England (due to the Anglo-Spanish War). When a supply ship finally landed, the settlement was found abandoned with no sign of the colonists. All 100 people had disappeared without any indication of a struggle, and so Roanoke became known as the Lost Colony.

13. Royal wraps : ERMINES
The stoat has dark brown fur in the summer, and white fur in the winter. Sometimes the term “ermine” is used for the animal during the winter when the fur is white. Ermine skins have long been prized by royalty and are often used for white trim on ceremonial robes.

20. Victim of Paris : ACHILLES
Achilles is a Greek mythological figure, the main protagonist of Homer’s “Iliad”. Supposedly when Achilles was born his mother attempted to make him immortal by dipping him into the River Styx. As he was held by the heel as he was immersed, this became the only vulnerable point on his body. Years later he was killed when a poisoned arrow struck him in the heel. The arrow was shot by Paris.

35. Impetuous person : HOTSPUR
A hotspur is a fiery or impetuous person. The term has come into English via the nickname of an English rebel called Sir Henry Percy. “Hotspur” led a rebellion against King Henry IV in 1403, although he didn’t get very far. In the Battle of Shrewsbury he raised his visor to get some air, and was hit in the mouth with an arrow, dying instantly. Henry Percy lent his name to so many things, including Tottenham Hotspur Football Club in London (my favorite soccer team growing up) and the “Hotspur” comic book (my favorite read as a youngster).

44. Matisse, Derain and fellow artists, with “les” : FAUVES
Henri Matisse was a French artist renowned for his contribution to modern art. In his early career, Matisse was classed as a “fauve”, one of the group of artists known as the “wild beasts” who emphasized strong color over realism in their works. He was a lifelong friend of Pablo Picasso, and the two were considered to be good-natured rivals so their works are often compared. One major difference between their individual portfolios is that Picasso tended to paint from his imagination, whereas Matisse tended to use nature as his inspiration.

50. Recipient of a royal charter, with “the” : BEEB
The British Broadcasting Corporation (BBC) is also known as “the Beeb”, a name given to the network by the great Peter Sellers on the classic British radio comedy called “The Goon Show”. The BBC was founded in 1922, and was the world’s first national broadcasting organization.

54. Chi-___ (religious symbol) : RHO
Chi Rho is an ancient religious symbol in the Christian tradition. “Chi’ and “rho” are the first two letters in the Greek word for “Christ”.