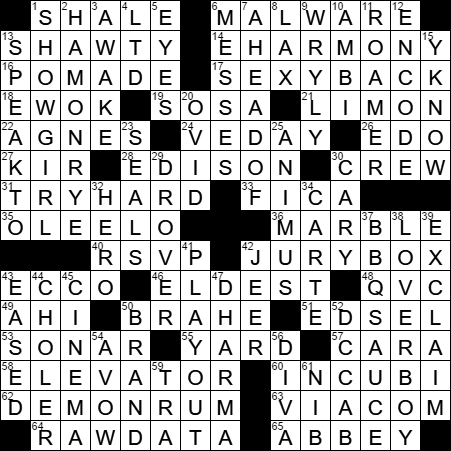 Today’s Wiki-est, Amazonian Googlies
Across
1. Something fracked in fracking : SHALE
The organic matter in oil shale that is insoluble in organic solvents is known as kerogen. Ultimately, kerogen turns into oil and natural gas.

6. Worms and such : MALWARE
“Malware” is a collective term for software and program code that is created to intentionally disrupt and exploit computer systems. Viruses, worms, trojan horses and spyware are all covered by the term. “Malware” is short for “malicious software”.

18. Arboreal sci-fi creature : EWOK
The Ewoks are creatures who live on the moon of Endor, first appearing in “Star Wars Episode VI: Return of the Jedi”. They’re the cute and cuddly little guys that look like teddy bears.

19. Fifth player to hit 600 homers : SOSA
Sammy Sosa was firmly in the public eye in 1998 when he and Mark McGwire were vying to be the first to surpass the home run record held by Roger Maris. McGwire fell out of public favor due to stories of steroid abuse (stories which he later admitted were true) while Sosa fell out of favor when he was found to be using a corked bat in a 2003 game.

22. Saint often depicted with a lamb : AGNES
Saint Agnes is the patron saint of young girls. John Keats wrote a poem called “The Eve of Saint Agnes” which refers to the superstition that young women should practice certain rituals on Saint Agnes’s Eve in order to identify their future husbands.

24. Celebration that coincided with Truman turning 61 : V-E DAY
World War II started in 1 September 1939 with the invasion of Poland by Nazi Germany. V-E Day (Victory in Europe Day) was celebrated on 8 May 1945, when the German military surrendered in Berlin. V-J Day (Victory over Japan Day) was celebrated on 2 September 1945 when the Japanese signed the surrender document aboard the USS Missouri in Tokyo Bay.

26. Japan’s ___ Castle : EDO
Edo is the former name of the Japanese city of Tokyo. Edo was the seat of the Tokugawa shogunate, a feudal regime that ruled from 1603 until 1868. The shogun lived in the magnificent Edo Castle. Some parts of the original castle remain and today’s Tokyo Imperial Palace, the residence of the Emperor of Japan, was built on its grounds.

27. Cassis cocktail : KIR
Kir is a French cocktail, made by adding a teaspoon or so of creme de cassis (blackcurrant liqueur) to a glass, and then topping it off with white wine. The drink is named after Felix Kir, the Mayor of Dijon in Burgundy, who used to offer the drink to his guests. My wife (expensive tastes!) is particularly fond of a variant called a Kir Royale, in which the white wine is replaced with champagne.

28. Tesla competitor : EDISON
George Westinghouse was an American engineer and businessman, a rival to Thomas Edison in developing the first robust electrical grid for the country. Edison’s approach was to distribute electrical power using DC current, but Westinghouse opted to partner with Nikola Tesla and worked with AC current. AC technology won the day!

33. Form W-2 abbr. : FICA
The Federal Insurance Contributions Act tax (FICA) was introduced in the 1930s as part of President Roosevelt’s New Deal. FICA payments are made by both employees and employers in order to fund Social Security and Medicare.

35. Palindromic 1976 greatest hits album : OLE ELO
ELO stands for the Electric Light Orchestra, a symphonic rock group from the north of England. ELO’s manager was Don Arden, father of Sharon Osbourne (wife of Ozzy). The band released a compilation album with the rather nifty palindromic name “Olé ELO” in 1976.

40. Say yes or no, say : RSVP
RSVP stands for “répondez s’il vous plaît”, which is French for “please, answer”.

43. Danish shoe maker with more than 1,000 global stores : ECCO
I have to say, after owning several pairs, that ECCO shoes are the most comfortable in the world …

48. HSN competitor : QVC
The QVC shopping channel was founded in 1986 in West Chester, Pennsylvania. The company now has operations not only in the US but also in the UK, Germany, Japan and Italy. That means QVC is reaching 200 million households. The QVC acronym stands for Quality, Value and Convenience.

49. Sushi bar selection : AHI
Yellowfin and bigeye tuna are usually marketed as “ahi”, the Hawaiian name. They are both big fish, with yellowfish tuna often weighing over 300 pounds, and bigeye tuna getting up to 400 pounds.

50. Astronomer who coined the term “nova” : BRAHE
Tycho Brahe was an astronomer and contemporary of Galileo. Brahe lost his nose in a duel, and wore a replacement made from either silver or gold that was pasted onto his face!

51. Bomb with wheels : EDSEL
The Edsel brand of automobile was named for Edsel, son of Henry Ford. Sadly, the name “Edsel” has become synonymous with “failure”, which was no fault of Edsel himself who had died several years before the Edsel line was introduced. When the Ford Motor Company introduced the Edsel on 4 September 1957, Ford proclaimed the day to be “E Day”.

60. Evil spirits : INCUBI
In folklore, a succubus is a female demon that takes on the form of an attractive female in order to seduce unwitting men. The succubus draws energy from the seduced men in order to survive, using sexual intercourse in the same way that a vampire might suck blood for the same purpose. The word succubus derives from the Latin “succubare”, itself from “sub” “cubare” meaning “to lie under”. There was a male equivalent to a succubus, namely an incubus.

62. Prohibitionists’ target : DEMON RUM
The 18th Amendment to the US Constitution was a great victory for the temperance movement (the “dry” movement), and in 1919 ushered in the Prohibition era. Highly unpopular (with the “wet” movement), Prohibition was repealed in 1933 by the 21st Amendment.

64. Stuff to mine : RAW DATA
The process of data mining is used to extract information from a database and present it in a form that facilitates further use.

Down
2. Sandwich often served with Dijon mustard : HAM ON RYE
Dijon is a city in eastern France, in the Burgundy region. Dijon is famous for its mustard, a particularly strong variation of the condiment. The European Union doesn’t protect the name “Dijon” so anyone can use it on a label. That seems fair enough to me, given that 90% of the mustard made in and around Dijon is produced using mustard seed imported from Canada!

4. Firm backing? : LTD
In Britain and Ireland the most common type of business (my perception anyway) is one that has private shareholders whose liability is limited to the value of their investment. Such a company is known as a private limited company, and has the letters “Ltd” after the name. If the shares are publicly traded, then the company is a public limited company, and has the letters “plc” after the name.

8. Starting point of many a red-eye : LAX
Los Angeles International Airport is the sixth busiest airport in the world in terms of passenger traffic, and the busiest here on the West Coast of the US. The airport was opened in 1930 as Mines Field and was renamed to Los Angeles Airport in 1941. On the airport property is the iconic white structure that resembles a flying saucer. This is called the Theme Building and I believe it is mainly used as a restaurant and observation deck for the public. The airport used to be identified by the letters “LA”, but when the aviation industry went to a three-letter standard for airport identification, this was changed to “LAX”. Apparently the “X” has no significant meaning.

9. How Stephen Colbert sometimes speaks : WRYLY
Stephen Colbert is a political satirist who hosted his own show on Comedy Central, “The Colbert Report”. Colbert’s first love was theater, and so he studied to become an actor. He then moved into comedy, and ended up on the “The Daily Show with Jon Stewart”. He left “The Daily Show” in 2005 to set up his own spinoff, “The Colbert Report”. In his own inimitable way, Colbert likes to use a “French” pronunciation for the name of his show, so “The Colbert Report” comes out as “The Col-bear Rep-oar”. Colbert took over the “Late Show” when David Letterman retired.

10. Prefix whose last two letters are a prefix meaning the same thing : AMBI-
The prefix “ambi-” that we use to mean “both” is a Latin word that actually means “around” or “round about”. “Ambivalence” was originally just a psychological term, describing “serious conflicting feelings”. Later it came to mean uncertainty about which course to follow.

20. He wrote “Venus favors the bold” : OVID
The Roman poet Publius Ovidius Naso is today known simply as Ovid. Ovid is usually listed alongside the two other great Roman poets: Horace and Virgil.

23. Navy ___ : SEALS
SEAL is an acronym used by the US Navy’s SEa, Air and Land teams. The SEALs were born out of the Navy’s special warfare groups from WWII, like the Underwater Demolition Teams and the Motor Torpedo Boat Squadrons. The Navy SEAL unit was established soon after President Kennedy’s famous speech in which he announced the plan to put a man on the moon, as in the same speech the president allocated $100m of funding to strengthen special operations forces. The Navy used some of this money to set up guerrilla and counterguerrilla units, which soon became the SEALs.

37. Wing covering : BBQ SAUCE
There are a few stories about how Buffalo wings were first developed, most of them related to the Anchor Bar in Buffalo, New York. If you’re looking for Buffalo wings on a menu in Buffalo, you’ll note that in and around the city they’re just referred to as “wings”.

42. Heckle : JEER
The original use of the verb “to heckle” was to mean questioning severely, and for many years was associated with the public questioning of parliamentary candidates in Scotland. In more recent times, the meaning has evolved into questioning that is less polite and that is directed at standup comics.

47. Essential principle of Hinduism : DHARMA
In the context of Buddhism, “dharma” can mean the collection of teachings and doctrines of the faith. The term is also used to describe proper and correct behavior that maintains the natural order of things.

52. Mr. T vehicle : DC CAB
“D.C. Cab” is a comedy movie released in 1983 starring Mr. T. I don’t hear many good things about the film, although there is a special appearance by Irene Cara of “Fame” fame …

56. Temperamental type : DIVA
The term “diva” comes to us from Latin via Italian. “Diva” is the feminine form of “divus” meaning “divine one”. The word is used in Italy to mean “goddess” or “fine lady”, and especially is applied to the prima donna in an opera. We often use the term to describe a singer with a big ego.