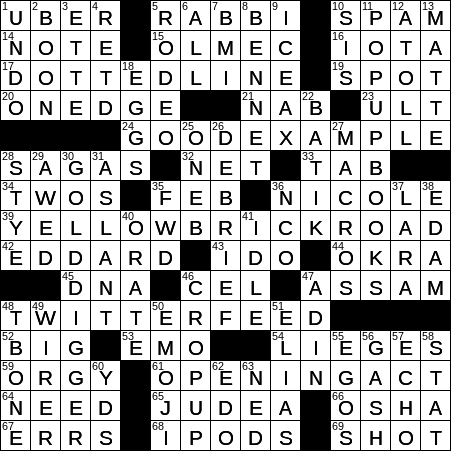 CROSSWORD SETTER: Alan DeLoriea
THEME: Some Things to Follow
Each of today’s themed answers has the same clue: “Something to follow”.

Today’s Wiki-est, Amazonian Googlies
Across
1. Company whose business is picking up : UBER
Uber is a ridesharing service that was founded in 2009 and is based in San Francisco. The service is somewhat controversial and has been described as an illegal taxicab operation. Central to Uber’s service is the company’s mobile app, which can use the client’s GPS location to help find the nearest available ride. Uber’s main competitor is Lyft. Personally, I love the service and have only had good experiences …

5. Torah expert : RABBI
The word “Torah” best translates as “teaching”, I am told.

10. Email folder : SPAM
Apparently the term “spam”, used for unwanted email, is taken from a “Monty Python” sketch. In the sketch (which I’ve seen) the dialog is taken over by the word Spam, a play on the glut of canned meat in the markets of Britain after WWII. So “spam” is used for the glut of emails that takes over online communication. I can just imagine nerdy Internet types (like me) adopting something from a “Monty Python” sketch to describe an online phenomenon …

15. Mexican civilization known for its colossal head sculptures : OLMEC
The Olmec were an ancient civilization that lived in the lowlands of south-central Mexico from about 1500 BC to about 400 BC.

16. Teensy bit : IOTA
Iota is the ninth letter in the Greek alphabet. We use the word “iota” to portray something very small as it is the smallest of all Greek letters.

33. Q neighbor : TAB
Like most features on our computer keyboards, the tab key is a hangover from the days of typewriters. When using a typewriter, making entries into a table was very tedious, involving lots of tapping on the spacebar and backspace key. So, a lever was added to typewriters that allowed the operator to “jump” across the page to positions that could be set by hand. Later this was simplified to a tab key which could be depressed, causing the carriage to jump to the next tab stop in much the same way that the modern tab key works on a computer.

39. Something to follow : YELLOW BRICK ROAD
According to L. Frank Baum’s series of “Oz” novels, there are two Yellow Brick Roads that lead to the Emerald City from Munchkin Country, and it turns out that Dorothy chose the harder of the two. There is also a Red Brick Road, which leads from Munchkin County to the Country of the Quadlings.

44. Gumbo vegetable : OKRA
The plant known as okra is mainly grown for it edible green pods. The pods are said to resemble “ladies’ fingers”, which is an alternative name for the plant. Okra is known as “ngombo” in Bantu, a name that might give us the word “gumbo”, the name for the name of the southern Louisiana stew that includes okra as a key ingredient.

45. Helical stuff : DNA
Francis Crick and James Watson discovered that DNA had a double-helix, chain-like structure, and published their results in Cambridge in 1953. To this day the discovery is mired in controversy, as some crucial results collected by fellow researcher Rosalind Franklin were used without her permission or even knowledge.

46. Still frame of Mickey, maybe : CEL
In the world of animation, a cel is a transparent sheet on which objects and characters are drawn. In the first half of the 20th century the sheet was actually made of celluloid, giving the “cel” its name.

47. Indian tea region : ASSAM
Assam is a state in the very northeast of India, just south of the Himalayas. Assam is noted for its tea as well as its silk.

48. Something to follow : TWITTER FEED
I have never tweeted in my life, and have no plans to do so (but one should never say “never”). Twitter is a microblogging service that limits any post sent to just 140 characters. In a sense, it is similar to this blog. Here I send out a post once a day containing information that I think might be useful to folks (thank you for reading!). I don’t think I could send out much of interest using just 140 characters.

54. Feudal lords : LIEGES
A liege was a feudal lord, one to whom service or allegiance was owed under feudal law. “Liege” was also the term used for one who owed allegiance or service to a lord. Very confusing …

66. Arm of the Dept. of Labor : OSHA
The Occupational Safety and Health Administration (OSHA) was created in 1970 during the Nixon administration. OSHA regulates workplaces in the private sector and regulates just one government agency, namely the US Postal Service.

The US Department of Labor (DOL) was founded as the Bureau of Labor in 1889 under the Department of the Interior. The Bureau’s status was elevated to Cabinet level by President William Howard Taft in 1913, with a bill he signed on his last day in office. The DOL has headquartered in the Frances Perkins Building in Washington, D.C. since 1975. The building was named for Frances Perkins who served as Secretary of Labor from 1933 to 1945 and who was the first female cabinet secretary in US history.

68. Devices for many runners : IPODS
The iPod is Apple’s signature line of portable media players. The iPod first hit the market in 2001 with a hard drive-based device, now known as the iPod Classic. Later models all use flash memory, allowing a smaller form factor. The smallest of the flash-based models is the iPod Shuffle, which was introduced in 2005.

Down
4. On Medicare, say: Abbr. : RETD
Medicare is a the national medical insurance program administered by the US government. The term “Medicare” originally applied to a government program introduced in 1956 that provided coverage for families of those serving in the military. The current Medicare program was introduced by the Johnson administration in 1966, to provide health insurance to anyone aged 65 years or older.

5. “It’s not my first ___” : RODEO
The phrase “not my first rodeo” means “not the first time I’ve done this”. The phrase started to be used after country singer Vern Gosdin released the song “This Ain’t My First Rodeo” in 1990. Gosdin said that he’d first heard the idiom from a workman who added an extra room over his garage.

7. Health meas. used to diagnose obesity : BMI
The body mass index (BMI) is the ratio of a person’s height to his or her mass.

10. “___ boom bah!” : SIS
“Sis boom bah” is apparently a popular cheer in American high schools and colleges (I didn’t know that!). The term was also used by Johnny Carson when he was playing the character Carnac the Magnificent.

12. Ring in the ocean : ATOLL
An atoll is a coral island that is shaped in a ring and enclosing a lagoon. There is still some debate as to how an atoll forms, but a theory proposed by Charles Darwin while on his famous voyage aboard HMS Beagle still holds sway. Basically an atoll was once a volcanic island that had subsided and fallen into the sea. The coastline of the island is home to coral growth which persists even as the island continues to subside internal to the circling coral reef.

18. Parts of an ovo-lacto vegetarian’s diet : EGGS
A lacto-ovo vegetarian is someone who does not consume meat or fish, but does eat eggs (ovo) and dairy (lacto) products.

22. Dyeing technique : BATIK
Genuine batik cloth is produced by applying wax to the parts of the cloth that are not to be dyed. After the cloth has been dyed, it is dried and then dipped in solvent that dissolves the wax.

27. Computer shortcuts : MACROS
A macroinstruction (usually shortened to “macro”) is a set of instructions in a computer program that are abbreviated to one simple command.

30. One who wants a ring for bling? : GOLD DIGGER
Bling-bling (often simply “bling”) is the name given to all the shiny stuff sported by rap stars in particular i.e. the jewelry, watches, metallic cell phones, even gold caps on the teeth. The term comes from the supposed “bling” sound caused by light striking a shiny metal surface.

36. Sgt., e.g. : NCO
An NCO or “noncom” is a non-commissioned officer in the armed forces. Usually such an officer is one who has earned his or her rank by promotion through the enlisted ranks. A good example would be a sergeant major (sgt. maj.).

“Good Morning America” (GMA) is ABC’s morning show, and has been since 1975. There was even a spinoff show called “Good Afternoon America”, although that only lasted for a few months in 2012.

38. Cheese coated in red wax : EDAM
Edam cheese takes its name from the Dutch town of Edam in North Holland. The cheese is famous for its coating of red paraffin wax, a layer of protection that helps Edam travel well and prevents spoiling. You might occasionally come across an Edam cheese that is coated in black wax. The black color indicates that the underlying cheese has been aged for a minimum of 17 weeks.

40. One might do it from a soapbox : ORATE
Back in the 1650s, a “soap box” was just that, a wooden box for holding or transporting soap. Empty soap boxes were easily carried by a potential orator and used as a stand from which to deliver an address.

47. Deuce follower : AD IN
In tennis, if the score reaches “deuce” (i.e. when both players have scored three points), then the first player to win two points in a row wins the game. The player who wins the point immediately after deuce is said to have the “advantage”. If the player with the advantage wins the next point then that’s two in a row and that player wins the game. If the person with the advantage loses the next point, then advantage is lost and the players return to deuce and try again. If the one of the players is calling out the score then if he/she has the advantage then that player announces “ad in” or more formally “advantage in”. If the score announcer’s opponent has the advantage, then the announcement is “ad out” or “advantage out”. Follow all of that …?

50. Nontext part of a text : EMOJI
An emoji is a character found on many cell phones now that is much like an emoticon, but more elaborate.

51. ___ Sports Bureau (official 58-Down provider for Major League Baseball) : ELIAS
(58D. See 51-Down : STAT)
The Elias Sports Bureau has been providing research and statistics for professional sports since 1913. The business was set up in 1913 in New York City by Al Munro Elias and his brother Walter.

57. Voice-controlled product from Amazon : ECHO
Amazon Echo is a voice-controlled hardware device that can be used to provide several services including playing radio programs and music, recording of shopping lists, and managing a calendar. The device just sits say in the home listening, until it hears a “wake up” command.

62. Old name for Tokyo : EDO
Edo is the former name of the Japanese city of Tokyo. Edo was the seat of the Tokugawa shogunate, a feudal regime that ruled from 1603 until 1868. The shogun lived in the magnificent Edo castle. Some parts of the original castle remain and today’s Tokyo Imperial Palace, the residence of the Emperor of Japan, was built on its grounds.

63. Homer’s neighbor : NED
Ned Flanders lives next door to Homer on TV’s “The Simpsons”. Ned is voiced by actor Harry Shearer and has been around since the very first episode aired in 1989.