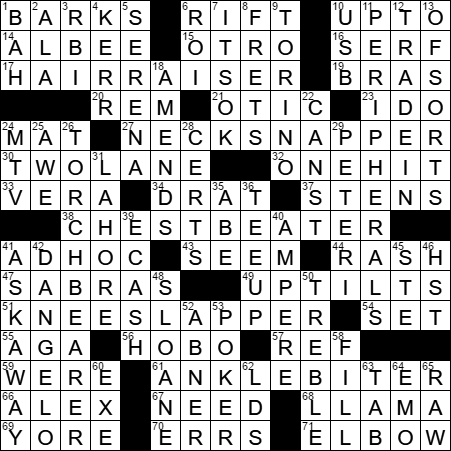 CROSSWORD SETTER: Ned White
THEME: Moving Down the Body
Today’s themed answers each start with a body part, starting with the HAIR at the top and ending with the ANKLE on the bottom:

17A. Something scary : HAIR-RAISER
27A. It grabs one’s attention : NECK-SNAPPER
38A. Boastful sort : CHEST-BEATER
51A. Really good joke : KNEE-SLAPPER
61A. Rug rat : ANKLE-BITER

Today’s Wiki-est, Amazonian Googlies
Across
6. Schism : RIFT
A schism is a split or a division, especially in a religion.

16. Feudal worker : SERF
A serf was a member of the lowest feudal class, someone attached to land owned by a lord. “Serf” comes from the Latin “servus”, meaning “slave”.

19. Some Maidenform products : BRAS
Maidenform is a manufacturer of underwear for women that was founded in 1922. The three co-founders were driven to defy the norms of the day that dictated a flat-chested look for women. They produced items that fit the female body, hence the name “Maidenform”.

20. Rock band fronted by Michael Stipe : REM
Michael Stipe was the lead vocalist for the band R.E.M. from 1980 through 2011. Stipe is also active in the film industry. He served as an executive producer on the films “Being John Malkovich” and “Man on the Moon”.

33. Aloe ___ : VERA
Aloe vera has a number of alternate names that are descriptive of its efficacy as a medicine. These include the First Aid plant, Wand of Heaven, Silent Healer and Miracle Plant.

41. Like some short-lived committees : AD HOC
The Latin phrase “ad hoc” means “for this purpose”. An ad hoc committee, for example, is formed for a specific purpose and is disbanded after making its final report.

47. Native Israelis : SABRAS
Jewish people born in the State of Israel, or the historical region of israel, are known as Sabras. “Sabra” is actually the name of the prickly pear, the thorny desert cactus. Apparently the name “Sabra” is used because someone born in the region is said to be tough on the outside and sweet on the inside, just like a prickly pear.

55. ___ Khan (Islamic title) : AGA
Aga Khan is a hereditary title of the Imam of a large sect within the Shi’a Muslim faith. The current Aga Khan is Shah Karim al-Hussayni, who has held the position since 1957.

56. Vagrant : HOBO
No one seems to know for sure how the term “hobo” originated, although there are lots of colorful theories. My favorite is that “hobo” comes from the first letters in the words “ho-meward bo-und”, but it doesn’t seem very plausible. A kind blog reader tells me that according to Click and Clack from PBS’s “Car Talk” (a great source!), “hobo” comes from “hoe boy”. Hoe boys were young men with hoes looking for work after the Civil War. Hobos differed from “tramps” and “bums”, in that “bums” refused to work, “tramps” worked when they had to, while “hobos” traveled in search of work.

57. Soccer official, for short : REF
Back in the early 17th century, a “referee” was someone who examined patent applications. We started using the same term for a person presiding over a sporting event in the 1820s. “Referee” is derivative of the verb “to refer”, and literally describes someone who has the authority to make a decision by “referring to” a book, archive etc.

61. Rug rat : ANKLE-BITER
“Rug rat” and “ankle-biter” are familiar terms meaning “child”, especially a child who is not yet walking.

66. “Jeopardy!” host Trebek : ALEX
Alex Trebek has been the host of “Jeopardy!” since the syndicated version of the game show launched in 1984. Trebek has missed just one episode since then, when he and host of “Wheel of Fortune” Pat Sajak swapped roles in 1997 as an April Fool’s joke.

68. Source of Peruvian wool : LLAMA
The wool from a llama is much softer than that from a sheep, and it is also free from lanolin.

Down
1. Cry with “humbug!” : BAH!
The classic 1843 novella “A Christmas Carol” by Charles Dickens has left us with a few famous phrases and words. Firstly, it led to popular use of the phrase “Merry Christmas”, and secondly it gave us the word “scrooge” meaning a miserly person. And thirdly, everyone knows that Ebenezer Scrooge uttered the words “Bah! Humbug!”.

2. Chicken ___ king : A LA
A dish prepared “a la king” (usually chicken or turkey), is food prepared in a cream sauce, with mushrooms, pimentos, green peppers and sherry.

4. Deborah of “The King and I” : KERR
The lovely Deborah Kerr was a Scottish actress who made a real name for herself on the American stage and in Hollywood movies. Despite all her success, and six nominations for a Best Actress Oscar, Kerr never actually won an Academy Award. In 1967 she appeared in the James Bond film “Casino Royale” at the age of 46, making her oldest Bond Girl of all time.

5. One of tennis’s Williams sisters : SERENA
Serena Williams is the younger of the two Williams sisters playing professional tennis. Serena has won more prize money in her career than any other female athlete.

9. 2006 Winter Olympics city : TORINO
Turin (“Torino” in Italian) is a major city in the north of Italy that sits on the Po River. Back in 1861, when the Kingdom of Italy was formed, Turin was chosen as the first capital of the country.

10. Kind of port on a computer : USB
Universal Serial Bus (USB) is an industry standard dealing with how computers and electronic devices connect and communicate, and deal with electrical power through those connections.

26. Muhammad Ali, for the 1996 Olympics : TORCH BEARER
The boxer Cassius Marcellus Clay, Jr. was born in 1942 in Louisville, Kentucky. Clay changed his name to Muhammad Ali when he converted to Islam in 1964. Who can forget Muhammad Ali lighting the Olympic flame for the 1996 games in Atlanta?

28. Candy that’s “two mints in one” : CERTS
Certs were the first breath mints to be marketed nationally in the US, hitting the shelves in 1956. A Cert is called a mint, but it isn’t really as it contains no mint oil and instead has its famous ingredient named “Retsyn”. Retsyn is a mixture of copper gluconate (giving the green flecks), partially hydrogenated cottonseed oil (not healthy!) and flavoring (maybe mint?).

29. Czar called “the Great” : PETER I
Peter the Great was perhaps the most successful of the Romanov tsars, famous for modernizing Russia and expanding the country’s sphere of influence, creating the Russian Empire. He ruled from 1682 until his death in 1725.

31. After Karachi, the most populous city in Pakistan : LAHORE
Lahore is a large city in Pakistan, second in size only to Karachi. It is known as the Garden of the Mughals (or in English, Moguls) because of its association with the Mughal Empire. The Mughals ruled much of India from the sixteenth to the nineteenth centuries.

35. Honest ___ (presidential moniker) : ABE
Abraham Lincoln was the sixteenth President of the US. There are several stories told about how he earned the nickname “Honest Abe”. One story dates back to early in his career as a lawyer. Lincoln accidentally overcharged a client and then walked miles in order to right the wrong as soon as possible.

39. Bitcoins, for example : E-CASH
Bitcoins are digital units of currency that are used on some Internet sites. Bitcoins are the most popular alternative currency used on the Web today. More and more reputable online retailers are accepting bitcoins, including Overstock.com, Expedia, Dell and Microsoft.

40. Electrical unit : AMPERE
The unit of electric current is the ampere, abbreviated correctly to “A” rather than “amp”. It is named after French physicist André-Marie Ampère, one of the main scientists responsible for the discovery of electromagnetism.

45. Sault ___ Marie, Mich. : STE
Sault Ste. Marie is the name of two cities on either side of the Canada-US border, one in Ontario and the other in Michigan. The two cities were originally one settlement in the 17th century, established by Jesuit Missionaries. The missionaries gave the settlement the name “Sault Sainte Marie”, which can be translated as “Saint Mary’s Falls”. The city was one community until 1817, when a US-UK Joint Boundary Commission set the border along the St. Mary’s River.

46. Successor to F.D.R. : HST
The letter “S” in the middle of the name Harry S. Truman (HST) doesn’t stand for anything. The future-president was named “Harry” in honor of his mother’s brother Harrison “Harry” Young. The initial “S” was chosen in honor of young Harry’s two grandfathers: Anderson S-hipp Truman and S-olomon Young.

48. “Miss ___” (2016 thriller) : SLOANE
“Miss Sloane” is a 2016 political thriller movie starring Jessica Chastain in the title role. Miss Sloane is a successful lobbyist in Washington who takes on the Gun Lobby, and learns how tough that can be.

52. “Li’l” guy of old comics : ABNER
“Li’l Abner” was created and drawn by Al Capp for over 43 years starting in 1934. Al Capp stopped producing the strip in 1977, largely due to illness (he died from emphysema two years later). As the strip finished up, he went so far as to apologize to his long-standing fans, saying that he should have stopped 3-4 years earlier as he felt that the quality of his work had gone down in those latter years.

58. Complete, as a crossword grid : FILL
Arthur Wynne is generally credited with the invention of what we now known as a crossword puzzle. Wynne was born in Liverpool, England and emigrated to the US when he was 19-years-old. He worked as a journalist and was living in Cedar Grove, New Jersey in 1913 when he introduced a “Word-Cross Puzzle” in his page of puzzles written for the “New York World”. And the rest, as they say, is history …

62. Mormon Church, for short : LDS
The Church of Jesus Christ of Latter-day Saints, often abbreviated to “LDS”, is known colloquially as the Mormon Church.

64. Rock genre : EMO
The musical genre of “emo” originated in Washington D.C. in the 80s, and takes its name from “emotional hardcore”. “Emo” is also the name given to the associated subculture. Not my cup of tea …