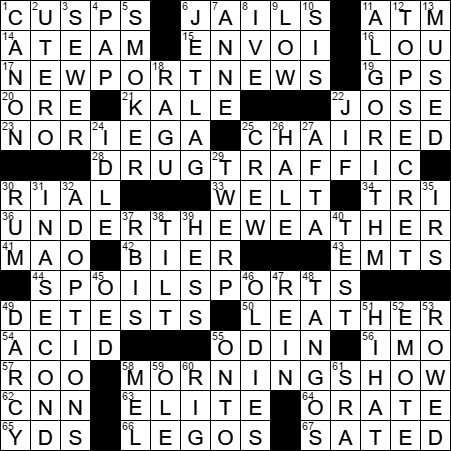 58A. Breakfast-time TV fare that usually includes the ends of 17-, 28-, 36- and 44-Across : MORNING SHOW
17A. Virginia city known for its shipbuilding : NEWPORT NEWS
28A. Flow of narcotics : DRUG TRAFFIC
36A. Not feeling so hot : UNDER THE WEATHER
44A. Killjoys : SPOILSPORTS

Today’s Wiki-est, Amazonian Googlies
Across
1. Molars usually have four of these : CUSPS
In a human tooth, cusps are the raised points on the crowns. Canine teeth have only one cusp each, and so are known as cuspids. Premolars have two cusps, and are usually referred to as bicuspids.

11. Place to enter a PIN : ATM
One enters a Personal Identification Number (PIN) when using an Automated Teller Machine (ATM).

15. Final stanza of a ballad : ENVOI
An envoy (also “envoi”) is a short closing stanza in some works of poetry.

16. Musician Reed : LOU
Lou Reed was best known as a rock musician and songwriter, and was especially associated with the fabulous 1973 hit “Walk on the Wildside”. Reed is less well known as a photographer, but he published two collections of his work. The first was released in 2003 under the title “Emotions in Action”, and the second in 2006 called “Lou Reed’s New York”. Reed passed away in 2013.

22. San ___ (Silicon Valley city) : JOSE
The Santa Clara Valley, just a few miles from me at the south of San Francisco Bay, is better known as “Silicon Valley”. The term “Silicon Valley” dates back to 1971 when it was apparently first used in a weekly trade newspaper called “Electronic News” in articles written by journalist Don Hoefler.

23. Manuel ___, former dictator of Panama : NORIEGA
Manuel Noriega was the forcibly removed from power by US forces in 19889 after he spent six years as military dictator of Panama. Noriega was found guilty of several crimes in a US court, including drug-trafficking. He served time with prisoner-of-war status in Florida for 17 years, until 2007. Noriega was extradited from the US to France in 2010, where he served more time for money-laundering. He was then extradited from France to Panama to face trial for human rights violations. Noriega remains in a Panamanian prison to this day.

30. Money in Yemen : RIAL
“Rial” is name of the currency of Yemen (as well as Iran, Oman, Cambodia and Tunisia).

34. Prefix with -ceratops : TRI-
The triceratops is that dinosaur that kind of looked like a rhinoceros, but with three horns. The name “triceratops” is derived from the Greek for “three-horned face”.

41. China’s ___ Zedong : MAO
Mao Zedong (also “Mao Tse-tung”) was born on December 16, 1893 in the Hunan Province of China. As Mao was the son of a peasant farmer, his prospects for education were limited. Indeed he left school at age 13 to work on the family farm but did eventually get to secondary school in Changsha, the provincial capital. In the years following, Mao continued his education in Beijing and actually turned down an opportunity to study in France.

42. Coffin stand : BIER
Biers are the special stands on which one rests a coffin for a service, or perhaps if the corpse is to lie in state. A bier may have wheels on it so that it can be used to transport the coffin to the graveside. The original biers were just flat pieces of wood on which the body was placed, covered with a shroud. Nowadays, we place the body in a casket, and then onto the bier.

54. Anything below 7 on the pH scale : ACID
As we all recall from chemistry class, a pH of 7 is considered neutral. Anything less than 7 is an acid, and anything above 7 is a base.

55. Norse god of war : ODIN
In Norse mythology, Odin was the chief of the gods. Odin’s wife Frigg was the queen of Asgard whose name gave us our English term “Friday” (via Anglo-Saxon). Odin’s son was Thor, and his name gave us the term “Thursday”. Odin himself gave us our word “Wednesday”, from “Wodin”, the English form of his name.

57. Inhabitant of Kanga’s pouch : ROO
Kanga is a friend of A. A. Milne’s “Winnie-the-Pooh”, and is a kangaroo. She is the mother of Roo, who appears more frequently in the storyline.

62. Anderson Cooper’s channel : CNN
Anderson Cooper is a respected news personality on CNN and on various shows around the dial. My favorite appearances of his, although he would call them trivial I am sure, was as host of a great reality game show called “The Mole” that aired in 2001.

66. Kids’ building toys : LEGOS
Lego is manufactured by Lego Group, a privately held company headquartered in Billund, Denmark. The company was founded by a carpenter called Ole Kirk Christiansen in 1934 and the now-famous plastic interlocking blocks were introduced in 1949. The blocks were originally sold under the name “Automatic Binding Bricks” but I think “Lego” is easier to remember! The name “Lego” comes from the Danish term “leg godt” meaning “play well”.

67. Having eaten enough : SATED
“Sate” is a variant of the older word “satiate”. Both terms can mean either to satisfy an appetite fully, or to eat to excess.

Down
1. Maker of the EOS and PowerShot cameras : CANON
I’ve been using Canon EOS cameras for decades now, and have nothing but good things to say about the cameras and the lenses. The EOS name stands for Electro-Optical System, and was chosen because it evokes the name of Eos, the Titan goddess of dawn from Greek mythology.

The Japanese company called Canon is noted mainly in the US for producing quality cameras. The company started out as Precision Optical Industry Laboratory in 1937 making camera bodies. The name was changed in 1947 to Canon.

2. In ___ (unborn) : UTERO
“In utero” is a Latin term meaning “in the uterus”. The Latin “uterus” translates as both “womb” and “belly”. The Latin word was derived from the Greek “hystera” also meaning womb, which gives us the words “hysterectomy”, and “hysterical”.

4. Drivel : PAP
One meaning of “pap” is soft or semi-liquid food for babies and small children. “Pap” comes into English via French, from the Latin word used by children for “food”. In the 1500s, “pap” also came to mean “an oversimplified” idea. This gives us a usage that’s common today, describing literature or perhaps TV programming that lacks real value or substance. Hands up those who think there’s a lot of pap out there, especially on television …

7. Actress Hathaway : ANNE
The actress Anne Hathaway is a favorite of mine, I must say. She starred in “The Devil Wears Prada” in 2006 and in 2007’s “Becoming Jane”, a film I particularly enjoyed.

8. “___ Gotta Be Me” (Sammy Davis Jr. song) : I’VE
“I’ve Gotta Be Me” is a song that was written for the 1968 Broadway musical “Golden Rainbow” starring Steve Lawrence and Eydie Gormé. The song was released as a single by Lawrence, and more famously by Sammy Davis, Jr. around the same time.

11. Procedure for solving a mathematical problem : ALGORITHM
In the world of mathematics and computing, an algorithm is a set of rules or steps used to solve a particular problem.

13. Ruminated (on) : MUSED
Ruminants are animals that “chew the cud”. Ruminants eat vegetable matter but cannot extract any nutritional value from cellulose without the help of microbes in the gut. Ruminants collect roughage in the first part of the alimentary canal, allowing microbes to work on it. The partially digested material (the cud) is regurgitated into the mouth so that the ruminant can chew the food more completely exposing more surface area for microbes to do their work. We also use the verb “to ruminate” in a figurative sense, to mean “to muse, ponder, chew over”.

18. Italian-style sauce brand : RAGU
The Ragú brand of pasta sauce is owned by Unilever. The name ” Ragù” is the Italian word for a sauce used to dress pasta, however the spelling is off a little. In Italian the word is “Ragù” with a grave accent over the “u”, but if you look at a jar of the sauce on the supermarket shelf it is spelled “Ragú” on the label, with an acute accent. Sometimes I think we just don’t try …

22. Skippy rival : JIF
Jif is the leading brand of peanut butter in the US, and has been since 1981. Introduced in 1958, it is now produced by Smuckers.

Skippy is a brand of peanut butter that has been around since 1933 when it was introduced by Rosefield Packing Co., just down the road here in Alameda, California. The companies that have owned the “Skippy” brand name have for decades been in dispute with the estate of Percy Crosby, the creator of the “Skippy” comic strip, over use of the name.

26. Physically fit : HALE
Both the words “hale” and “healthy” derive from the the Old English “hal” meaning healthy.

27. Old Spice alternative : AFTA
Afta is an aftershave in the Mennen range of products owned by Colgate-Palmolive.

The Old Spice brand of grooming products was introduced in 1937, originally intended for a female clientele. The first male product hit the shelves in 1938, and today Old Spice is completely focused on products for men.

29. Pipsqueak : TWERP
“Twerp” and “pipsqueak” are both terms used for someone who is insignificant and contemptible.

39. Gas company selling toy trucks : HESS
The Hess Corporation is an oil company based in New York City. In 1964, the company started selling toy trucks with the Hess logo on them, in Hess gas stations. The company has been selling them every since, bringing out new models just before Christmas. Hess toy trucks have become quite collectible and the old ones can fetch a pretty penny.

48. Argentine dances : TANGOS
The dramatic dance called the tango originated in the late 1800s in the area along the border between Argentina and Uruguay. Dancers and orchestras from Buenos Aires in particular traveled to Europe and beyond in the early twentieth century and brought the tango with them. The tango craze first struck Europe in Paris in the 1910s, and from there spread to London and Berlin, crossing the Atlantic to New York in 1913.

51. Pair of cymbals operated by a foot pedal : HI-HAT
In a drum kit, a hi-hat is that pairing of cymbals that sits on a stand and is played by using a foot pedal. The top cymbal is raised and lowered by the foot, hence creating a crashing sound.

58. Gibson who directed “The Passion of the Christ” : MEL
Mel Gibson is an actor who was born in America, and not in Australia as many believe. Gibson was born in Peekskill, New York and moved with his family to Sydney, Australia when he was 12 years old.

59. Cheer for a torero : OLE!
“Toreador” is an old Spanish word for a bullfighter, but it’s a term not used any more in Spain nor in Latin America. In English we use the term “toreador”, but in Spanish a bullfighter is a “torero”. A female bullfighter in a “torera”.