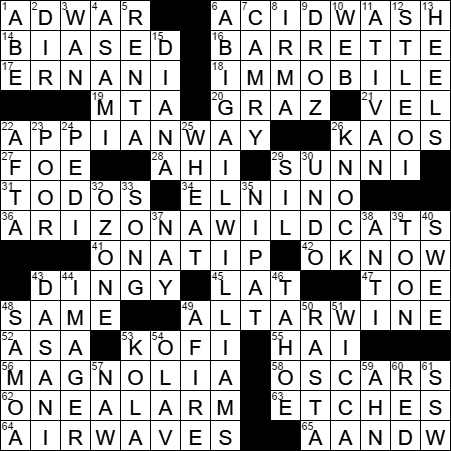 CROSSWORD SETTER: Michael Dewey
THEME: A and W
Today’s themed answers each comprise two words, starting with the letters A and W:

65A. Classic root beer brand … or a hint to the answers to this puzzle’s starred clues : A AND W

Today’s Wiki-est, Amazonian Googlies
Across
16. Securer of locks : BARRETTE
A barrette is a hair clip, a clasp for holding the hair in place. The word is French in origin, with a literal translation of “little bar”.

17. Verdi work that was the first opera to be recorded in its entirety : ERNANI
“Ernani” is an 1844 opera by Giuseppe Verdi that is based on a play called “Hernani” by Victor Hugo. For over a decade, “Ernani” was Verdi’s most popular opera, and then along came “Il trovatore” in 1853.

20. Austrian city where Kepler taught : GRAZ
Graz is the second-largest city in Austria, after the capital Vienna. One of Graz’s sons is actor and former governor Arnold Schwarzenegger. I used to work for a company headquartered in Graz and had the privilege of visiting that beautiful city several times …

Johannes Kepler was a mathematician, and most famously an astronomer. Kepler came up with his celebrated laws of planetary motion in the early 1600s.

22. *Road to ancient Rome : APPIAN WAY
The Appian Way has to be the most famous of the amazing roads of Ancient Rome. It stretched from Rome right into the south of Italy, terminating in the city of Brindisi in the southeast. The first section of the military road was completed in 312 BC, by the Roman censor called Appius Claudius Caecus, who gave the road its name “Via Appia”, or “Appian Way”.

26. Villainous “Get Smart” group : KAOS
27. 26-Across, to Maxwell Smart : FOE
The satirical comedy series called “Get Smart” was the creation of Mel Brooks and Buck Henry, and starred Don Adams as Agent 86, Maxwell Smart. Agent 86 worked for the spy agency CONTROL, alongside the lovely Agent 99. CONTROL’s sworn enemy was the criminal organization called KAOS. Both CONTROL and KAOS were originally intended to be acronyms, but creators Brooks and Henry were so busy launching the show that they forgot to come up with something suitable.

28. Sushi bar tuna : AHI
Yellowfin and bigeye tuna are usually marketed as “ahi”, the Hawaiian name. They are both big fish, with yellowfish tuna often weighing over 300 pounds, and bigeye tuna getting up to 400 pounds.

34. Pacific Ocean phenomenon : EL NINO
When the surface temperature of much of the Pacific Ocean rises more that half a degree centigrade, then there is said to be an El Niño episode. That small temperature change in the Pacific has been associated with climatic changes that can stretch right across the globe. El Niño is Spanish for “the boy” and is a reference to the Christ child. The phenomenon was given this particular Spanish name because the warming is usually noticed near South America and around Christmas-time.

36. *Tucson collegians : ARIZONA WILDCATS
The Wildcats are the athletic teams of the University of Arizona in Tucson.

A global positioning system (GPS) is known as a satellite navigation (Sat Nav) system in the UK and Ireland.

47. Turf ___ (football ailment) : TOE
“Turf toe” is a sports injury associated with play on artificial turf or any other surface without much give. Turf toe is a sprain of the ligaments around one or more toe joints, particularly the big toe. The medical term for the injury is “metatarsophalangeal joint sprain”.

49. *Holy Communion drink : ALTAR WINE
The Communion rite is the part of the Mass in the Roman Catholic tradition. The rite involves distribution of the Communion bread (the host, a wafer) to the faithful.

52. Cool ___ cucumber : AS A
Apparently scientists have shown that the inside of a cucumber growing in a field can be up to twenty degrees cooler than the surrounding air. That’s something that was believed by farmers as early as the 1730s, at which time the phrase “cool as a cucumber” was coined.

53. Former U.N. secretary general ___ Annan : KOFI
Kofi Annan is a diplomat from Ghana who served as General Secretary of the UN for ten years until the beginning of 2007. Annan was born into an aristocratic family, and had a twin sister named Efua Atta. Efua and Kofi shared the middle name “Atta”, which means “twin” in the Akan language of Ghana. Annan attended the MIT Sloan School of Management from 1971-72, and graduated with a Master of Science degree.

55. “Bali ___” : HA’I
The song “Bali Ha’i” is from the musical “South Pacific” by Rodgers and Hammerstein. In the musical, Bali Ha’i is the name of a volcanic island that neighbors the island on which the story takes place.

56. Mississippi’s state tree : MAGNOLIA
The Mississippi state quarter features two magnolia blossoms, and was first issued on October 15, 2002. Mississippi is known as the home to many stately Magnolia trees, giving it the nickname “the Magnolia State”.

58. Oldest entertainment awards ceremony : OSCARS
The Academy of Motion Picture Arts and Sciences (AMPAS) is the organization that gives the annual Academy Awards also known as the “Oscars”. The root of the name “Oscar” is hotly debated, but what is agreed is that the award was officially named “Oscar” in 1939. The first Academy Awards were presented at a brunch in 1929 with an audience of just 29 people. The Awards ceremony is a slightly bigger event these days …

62. Like barely spicy chili : ONE-ALARM
The spiciness or “heat” of a serving of chili is often designated by an unofficial scale ranging from one-alarm upwards.

65. Classic root beer brand … or a hint to the answers to this puzzle’s starred clues : A AND W
A&W is a brand of root beer that has been around since 1920, when Roy Allen partnered with Frank Wright to create the A&W moniker from their family names.

Down
1. Broadway’s Burrows : ABE
Abe Burrows was an author, composer and director who won four Tony Awards over his career, as well as a Pulitzer Prize for the musical adaptation of the book “How to Succeed in Business Without Really Trying”.

6. *Salem witch trials accuser : ABIGAIL WILLIAMS
Abigail Williams and Betty Parris were the two young women who made the initial accusations in the 1692 Salem Witch Trials. Just over a year later, twenty people had been executed and five others had died in prison.

7. Altima or Accord alternative : CAMRY
The Toyota Camry takes its name from the Japanese word for “crown”. Toyota management likes the idea of naming their cars after the word “crown”, as they did with the Toyota Crown, followed by the Toyota Corona (Latin for crown) and the Toyota Corolla (Latin for small crown).

8. Rombauer of cookery : IRMA
Irma Rombauer was the author of the famous cookbook “The Joy Of Cooking”. Rombauer self-published the book back in 1931 in St. Louis, Missouri. She and her family continued to publish privately as demand was high, and then a commercial printing house picked it up in 1936. “The Joy of Cooking” has been in print continuously ever since.

9. Health adviser on talk TV : DR OZ
Mehmet Oz is a cardiothoracic surgeon, and a TV personality known simply as “Dr. Oz”. Oz appeared as a health expert for several seasons on “The Oprah Winfrey Show”. Now he has his own “The Dr. Oz Show” on radio and television that is backed by Winfrey’s Harpo Productions.

11. Anxiety-treating medication : ATIVAN
Ativan is a brand name for the drug Lorazepam, which is often described for anxiety disorders.

12. Canonized fifth-century pope : ST LEO I
The first pope named Leo is now known as Pope Saint Leo the Great. Leo I is famous for meeting with the feared Attila the Hun and persuading him to turn back his invading force that was threatening to overrun Western Europe.

22. Mennen product : AFTA
Afta is an aftershave in the Mennen range of products that is owned by Colgate-Palmolive.

24. Lead-in to cab : PEDI-
A pedicab is also known as a cycle rickshaw.

32. A greenhouse gas : OZONE
Ozone gets its name from the Greek word ozein, meaning “to smell”. It was given this name as ozone’s formation during lightning storms was detected by the gas’s distinctive smell. Famously, there is a relatively high concentration of the gas in the “ozone layer” in the Earth’s stratosphere. This ozone layer provides a vital function for animal life on the planet as it absorbs most of the sun’s UV radiation. A molecule of ozone is made up of three oxygen atoms, whereas a “normal” oxygen has just two atoms.

Greenhouse gases are those that absorb and emit infrared radiation, meaning that they act as an insulator for our planet. The most abundant greenhouse gases in the atmosphere are water vapor, carbon dioxide and methane. Levels of carbon dioxide in the atmosphere have increased by about 40% since 1750, and levels of methane have increased over 150% in the same timeframe.

33. Spotify selection : SONG
Spotify is a popular music-streaming service that was launched in Sweden in 2008.

40. ___’Pea : SWEE
Originally Popeye used the nickname “Swee’pea” to address his girlfriend Olive Oyl. Then along comes a baby, found on Popeye’s doorstep.

46. Chevy model : TAHOE
The Chevrolet Tahoe is basically the same design as the GMC Yukon, both cars being sports utility vehicles. The Tahoe is rated at 15 mpg for city driving, but there is a hybrid version which is rated at a whopping 21 mpg …

48. Pago Pago’s locale : SAMOA
Pago Pago is the capital of American Samoa in the South Pacific. The island was used by the US Navy during WWII and it managed to escape most of the conflict. The only military incident of consequence was the shelling of the city’s harbor by a Japanese submarine. A more devastating event was the tsunami that hit Pago Pago and surrounding areas in 2009, causing widespread damage and numerous deaths.

49. Flambé, say : AFIRE
“Flambé” is the French word for “flamed”, and was originally a term used to describe certain types of porcelain. The word “flambé” crept into cookery just after 1900.

50. Dreads sporter : RASTA
Dreadlocks are matted coils of hair nowadays usually formed intentionally, although if one lets hair grow out without grooming then it naturally forms twisted and matted dreadlocks. The hairstyle is associated with the Rastafarian movement in which “dread” is a very positive term meaning “fear of the Lord”.

51. Religion with pentagrams : WICCA
Wicca is a relatively new phenomenon, a Neopagan religion that developed in the twentieth century. A follower of Wicca is called a Wiccan or a Witch.

53. Caffeine-laden nut : KOLA
The nut of the kola tree has a bitter taste, and is loaded with caffeine. Despite the taste, the nut is habitually chewed in some cultures, especially in West Africa where the tree is commonly found in the rainforest. Here in the US we best know the kola nut as a flavoring used in cola drinks.

54. Norway’s patron saint : OLAV
Of the many kings of Norway named Olaf/Olav (and there have been five), Olaf II is perhaps the most celebrated as he was canonized and made patron saint of the country. Olaf II was king from 1015 to 1028 and was known as “Olaf the Big” (or Olaf the Fat) during his reign. Today he is more commonly referred to as “Olaf the Holy”. After Olaf died he was given the title of Rex Perpetuus Norvegiae, which is Latin for “Norway’s Eternal King”.

59. “Kung Fu” actor Philip : AHN
The actor Philip Ahn is perhaps best known for playing Master Kahn, one of Caine’s teachers on the television show “Kung Fu”. Ahn was the first Asian-American actor to receive a star on the Hollywood Walk of Fame.