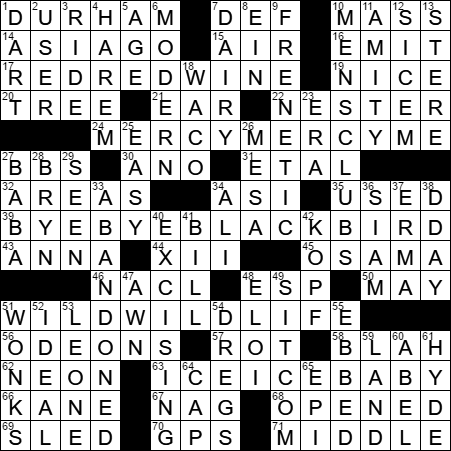 CROSSWORD SETTER: Peter A. Collins
THEME: Song, Song Titles
Each of today’s themed answers is a 3-word song title, with the first and second words repeated:

Today’s Wiki-est, Amazonian Googlies
Across
1. Twin city of Raleigh : DURHAM
The North Carolina city of Durham started out as a rail depot between the already-settled towns of Raleigh and Hillsborough. As such, the community initially went by the name “Durham Station”, with the name referring to Dr. Bartlett Durham, on whose land the rail depot was built.

14. Italian cheese : ASIAGO
Asiago is a crumbly cheese, named after the region in northeastern Italy from where it originates.

17. 1988 #1 hit for UB40 : RED RED WINE
The song “Red Red Wine” was written and originally recorded by Neil Diamond, in 1967. The lyrics refer to someone drowning his sorrows in red wine. The most famous cover version of the song was recorded by UB40 in 1982. It’s an interesting exercise to compare the mood of the two very different recordings, both of which I think have their merits …

22. Empty ___ (parent whose children have all moved away) : NESTER
Still working on that …

24. 1971 hit for Marvin Gaye subtitled “The Ecology” : MERCY MERCY ME
“Mercy Mercy Me” is a 1971 Marvin Gaye song that bemoans the fate of the environment due to the ravages of man.

34. “___ Lay Dying” : AS I
“As I Lay Dying” is a novel by William Faulkner first published in 1930. The book has an unusual structure, with stream of consciousness writing throughout. There is one whole chapter that I’d like to quote here:

39. 1920s standard with the lyric “Sugar’s sweet, so is she” : BYE BYE BLACKBIRD
“Bye Bye Blackbird” is a song published and first recorded in 1926. It has been recorded many, many times over the past decades, including separate versions by two ex-Beatles. Ringo Starr including the song on his 1970 album “Sentimental Journey”, and it also appears as a track on Paul McCartney’s 2012 album “Kisses on the Bottom”.

43. Woman in “The King and I” : ANNA
“The King and I” is a Rodgers and Hammerstein musical based on a book by Margaret Landon called “Anna and the King of Siam” first published in 1944. Landon’s book is based on a true story, told in the memoirs of Anna Leonowens. Leonowens was the governess of the children of King Mongkut of Siam in the 1860s, and she also taught the king’s wives.

44. 12, on a grandfather clock : XII
There are several sizes of “longcase clocks”, tall, freestanding clocks driven by a pendulum swinging inside a tower below the clock face. A longcase clock over 6 feet tall is called a grandfather, and one below five feet is a granddaughter, One that falls between five and six feet is known as a grandmother. The name of the clock derives from an 1876 song called “My Grandfather’s Clock”.

45. ___ bin Laden, 2011 Navy SEALs target : OSAMA
Osama bin Laden founded his militant Islamist group called al-Qaeda in the late eighties. “Al-Qaeda” translates as “the base”, and can refer to a military base. It was originally the name of a training camp set up for mujahedin fighters opposing the Russians who occupied Afghanistan at the time.

SEAL is an acronym used by the US Navy’s SEa, Air and Land teams. The SEALs were born out of the Navy’s special warfare groups from WWII, like the Underwater Demolition Teams and the Motor Torpedo Boat Squadrons. The Navy SEAL unit was established soon after President Kennedy’s famous speech in which he announced the plan to put a man on the moon, as in the same speech the president allocated $100m of funding to strengthen special operations forces. The Navy used some of this money to set up guerrilla and counterguerrilla units, which soon became the SEALs.

46. Salt, chemically : NACL
Sodium chloride (NaCl, common salt) is an ionic compound, a crystal lattice made up of large chloride (Cl) ions in a cubic structure, with smaller sodium (Na) ions in between the chlorides.

50. June preceder : MAY
The month of May was named after Maia, the Greek goddess of fertility.

56. Classical music halls : ODEONS
In Ancient Greece an odeon (also “odeum”) was like a small theater, with “odeon” literally meaning a “building for musical competition”. Odea were used in both Greece and Rome for entertainments such as musical shows and poetry readings.

62. Gas in commercial signs : NEON
The basic design of neon lighting was first demonstrated at the Paris Motor Show in 1910. Such lighting is made up of glass tubes containing a vacuum into which has been introduced a small amount of neon gas. When a voltage is applied between two electrodes inside the tube, the neon gas “glows” and gives off the familiar light.

66. 1941 film “citizen” : KANE
1941’s “Citizen Kane” was the first film made by Orson Welles, one considered by many to be the finest film ever made. It’s a remarkable achievement by Wells, as he played the lead, and also produced and directed. Despite all the accolades for “Citizen Kane” over the decades, the movie was far from a commercial success in its early run and actually lost money at the box office.

Down
1. Something thrown at a bull’s-eye : DART
Darts is a wonderful game often played in English and Irish pubs, even over here in America. The scoring in a traditional game of darts is difficult to describe in a sentence or two, but the game of darts called “Round the Clock” is simply hitting the numbers 1 through 20 in sequence.

2. Pusher’s customer : USER
That would be the pushing and using of illegal drugs.

4. ___ pants (baggy wear) : HAREM
Harem pants are an item of female clothing that originated in the Arabian Peninsula. They are loose fitting pants that gather at the ankle. The pants worn by belly dancers would be called harem pants.

8. German “a” : EIN
The definite article in German is der, die or das, for masculine, feminine and neuter nouns. The indefinite article is ein, eine or ein, again depending on the gender of the noun. A further complication, relative to English, is that the masculine form (and only the masculine form) of the article changes when used in the accusative case, when used with the object of a sentence. The accusative forms are “den” and “einen”.

13. One cubic meter : STERE
“Stere” is a metric measure, although it is not part of the modern metric system. Nowadays the stere is used as a measure for firewood, and is equal to one cubic meter.

18. City between Dallas and Austin : WACO
The Texas city of Waco is named for the Wichita people known as the “Waco”, who occupied the area for thousands of years.

25. Like a Monday crossword puzzle, relatively speaking : EASY
I must admit, before I started doing crossword puzzles regularly, I had no idea that the puzzles increased in difficulty level as the week progressed …

26. Western plateau : MESA
“What’s the difference between a butte and a mesa?” Both are hills with flat tops, but a mesa has a top that is wider than it is tall. A butte is a much narrower formation, taller than it is wide.

28. ___ Mawr College : BRYN
I used to live not far from Bryn-mawr (sometimes written as “Brynmwar”) in Wales, the town with the highest elevation in the country. Appropriately enough, “bryn mawr” is Welsh for “big hill”. There is also a Bryn Mawr in Pennsylvania (note the different capitalization) that is named after its Welsh counterpart. At the Pennsylvania location there’s a Bryn Mawr college, a private women’s school that was the first American university to offer graduate degrees to women.

34. With 27-Down, foe of the Forty Thieves : ALI
(27D. See 34-Down : BABA)
In the folk tale “Ali Baba and the Forty Thieves”, the title character is a poor woodcutter who discovers the magic words “Open Sesame” that open the thieves’ den.

38. June 6, 1944 : D-DAY
The most famous D-Day in history was June 6, 1944, the date of the Normandy landings in WWII. The term “D-Day” is used by the military to designate the day on which a combat operations are to be launched, especially when the actual date has yet to be determined. What D stands for seems to have been lost in the mists of time although the tradition is that D just stands for “Day”. In fact, the French have a similar term, “Jour J” (Day J), with a similar meaning. We also use H-Hour to denote the hour the attack is to commence.

47. Barley beard : AWN
“Awn” is the name given to hair or bristle-like structures found in numerous species of plants. In some species, like barley, the awns can contain photosynthetic tissue.

48. “The Time Machine” race : ELOI
In the 1895 novel by H. G. Wells called “The Time Machine”, there are two races that the hero encounter in his travels into the future. The Eloi are the “beautiful people” who live on the planet’s surface. The Morlocks are a race of cannibals living underground who use the Eloi as food.

49. “30 Rock” or “3rd Rock From the Sun” : SITCOM
“30 Rock” is a sitcom on NBC that was created by the show’s star Tina Fey. Fey is an ex-performer and writer from “Saturday Night Live” and uses her experiences on that show as a basis for the “30 Rock” storyline. Fey plays Liz Lemon, the head writer for the fictional sketch comedy series “TGS with Tracy Jordan”.

“3rd Rock From the Sun” is a sci-fi sitcom starring John Lithgow as high commander of an expedition of extraterrestrials sent to Earth to observe the behavior of human beings. The four visitors regard the Earth as very insignificant, just the “third rock (planet) from the Sun”.

51. Policy experts : WONKS
A “wonk” is an overly studious person. It is an American slang term that has been around at least since 1954. More recently, “wonk” has acquired an air of respectability as it has come to mean someone who has studies a topic thoroughly and become somewhat expert.

53. Sierra ___ (African country) : LEONE
The Republic of Sierra Leone is a country in West Africa, lying on the Atlantic Coast. The capital city of Freetown was originally set up as a colony to house the “Black Poor” of London, England. These people were mainly freed British slaves of Caribbean descent who were living a miserable life in the run-down parts of London. Perhaps to help the impoverished souls, perhaps to rid the streets of “a problem”, three ships were chartered in 1787 to transport a group of blacks, with some whites, to a piece of land purchased in Sierra Leone. Those who made the voyage were guaranteed British citizenship and protection. The descendants of these immigrants, and others who made the journey over the next 60 years, make up the ethnic group that’s today called the Sierra Leone Creole.

54. Bottom-of-the-bottle stuff : DREGS
The dregs in wine, the sediment that settles during fermentation (and sometimes in the bottle), is also called “lees”.

59. Word that fills both blanks in “This ___ is your ___” : LAND
Woody Guthrie was a singer-songwriter best known for his recording of the folk song “This Land is Your Land”, the lyrics of which were written by Guthrie himself.

60. Brother of Cain : ABEL
According to the Bible, Adam and Eve had several children, although only the first three are mentioned by name: Cain, Abel and Seth.

61. Jekyll’s alter ego : HYDE
Robert Louis Stevenson’s novella “The Strange Case of Dr. Jekyll and Mr. Hyde” was first published in 1886. There are many tales surrounding the writing of the story including one that the author wrote the basic tale in just three to six days, and spent a few weeks simply refining it. Allegedly, Stevenson’s use of cocaine stimulated his creative juices during those few days of writing.

65. Commercial lead-in to Pen : EPI-
EpiPen is a brand name of epinephrine auto-injector. An EpiPen delivers a measured dose of epinephrine, usually for the treatment of an allergic reaction.