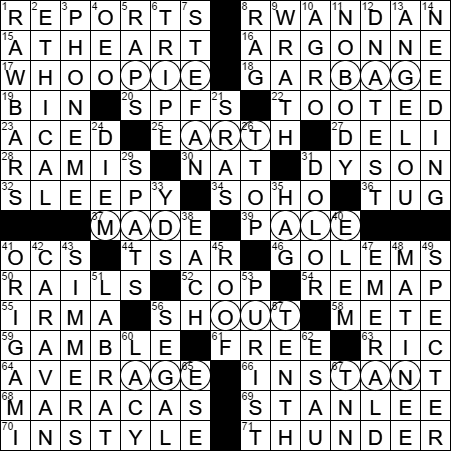 Today’s Wiki-est, Amazonian Googlies
Across
8. From Kigali, e.g. : RWANDAN
Kigali is the capital of the African nation of Rwanda, and is located in the center of the country. That location led to the city being picked as the capital in 1962, over the traditional capital of Nyanza. The choice was made on the occasion of Rwanda’s independence from Belgium. Kigali was the center of the Rwandan Genocide of 1994, in which half a million to one million Rwandans were killed, perhaps 20% of the country’s total population in the space of four months.

16. French locale of fierce W.W. I fighting : ARGONNE
The Meuse-Argonne Offensive (also called the Battle of the Argonne Forest) was an Allied offensive along the entire western front that took place in the last few weeks of WWI. Fought by US and French forces against the Germans, the offensive was the biggest operation launched by the American Expeditionary Force in WWI. The Meuse-Argonne was the deadliest battle in US history, as 26,277 US soldiers lost their lives.

17. Baked chocolaty treat : WHOOPIE PIE
A whoopie pie is might also be called a “BFO”, standing for Big Fat Oreo. The latter term is quite descriptive as a whoopie pie is made from two mound-shaped pieces of chocolate cake placed above and below a white creamy filling. There is some evidence that the confection originated in the with the Pennsylvania Amish. Apparently, when farmers found the pie in their lunch bags they shouted “whoopie!”, hence the name.

20. Nos. at the beach : SPFS
In theory, the sun protection factor (SPF) is a calibrated measure of the effectiveness of a sunscreen in protecting the skin from harmful UV rays. The idea is that if you wear a lotion with say SPF 20, then it takes 20 times as much UV radiation to cause the skin to burn than it would take without protection. I say just stay out of the sun …

28. “Caddyshack” director : RAMIS
Harold Ramis was a real all-rounder, working as an actor, director and writer. Indeed, in both “Ghostbusters” and “Stripes” he was a co-writer as well as playing a lead character. Ramis worked as writer-director on “Caddyshack”, “National Lampoon’s Vacation”, “Groundhog Day” and “Analyze This”.

“Caddyshack” is a comedy that was released in 1980 that was directed by Harold Ramis, his first movie. The film stars Chevy Chase, Rodney Dangerfield, Ted Knight and Bill Murray. “Caddyshack” has quite a cult following, but it’s a little too slapstick for me …

30. D.C. pro : NAT
The Washington Nationals (“The Nats”) baseball team started out life as the Montreal Expos in 1969. The Expos moved to Washington in 2005 becoming the Nats. There are only two Major Leagues teams that have never played in a World Series, one being the Mariners and the other the Nats.

31. Cleaner brand : DYSON
Dyson vacuum cleaners do not use a bag to collect dust. James Dyson invented the first vacuum cleaner to use cyclonic separation in 1979, frustrated at the poor performance of his regular vacuum cleaner. As Dyson cleaners do not use bags, they don’t have to deal with collection bags that are blocked with fine dust particles, even after emptying. Cyclonic separation uses high speed spinning of the dust-containing air so that the dust particles are thrown out of the airflow into a collection bin. We have a Dyson now, and should have bought it years ago …

34. Part of N.Y.C. once derisively called Hell’s Hundred Acres : SOHO
The Manhattan neighborhood known today as SoHo was very fashionable in the early 1900s, but as the well-heeled started to move uptown the area became very run down and poorly maintained. Noted for the number of fires that erupted in derelict buildings, SoHo earned the nickname “Hell’s Hundred Acres”. The area was then zoned for manufacturing and became home to many sweatshops. In the mid-1900s artists started to move into open loft spaces and renovating old buildings as the lofts were ideal locations in which an artist could both live and work. In 1968, artists and others organized themselves so that they could legalize their residential use of an area zoned for manufacturing. The group they formed took its name from the name given to the area by the city’s Planning Commission i.e “South of Houston”. This was shortened from So-uth of Ho-uston to SoHo as in the SoHo Artists Association, and the name stuck.

39. Draft choice : PALE ALE
Pale ale is a beer made using mainly pale malt, which results in a relatively light color for a malted beer.

Fort Benning is a US Army facility located outside Columbus, Georgia that has been home to the Army Infantry since 1918.

44. Early 20th-century abdicator : TSAR
The last ruler of Imperial Russia was Tsar Nicholas II (of the House of Romanov). Famously, the Tsar and his family were murdered in 1918 in the basement of a house in Yekaterinburg, Russia by members of the Bolshevik secret police. The Tsar’s youngest daughter was 16-year-old Anastasia and rumors of her escape have persisted for years. The rumors grew with the help of numerous women who claimed to be Anastasia. In 2009, DNA testing finally proved that the remains of all of the Tsar’s immediate family, including Anastasia, have been found and identified.

46. Magical creatures in Jewish folklore : GOLEMS
Golem is Yiddish slang for “dimwit”. In Jewish folklore a golem is an anthropomorphic being made out of inanimate matter, somewhat like an unintelligent robot.

63. Ocasek of the Cars : RIC
Ric Ocasek is an American musician of Czech heritage, and was the lead vocalist of the rock band known as the Cars.

68. Ones shaking to the music? : MARACAS
Maracas are percussion instruments native to Latin America. They are constructed from a dried shell, like that of a coconut, to which a handle is attached. The shell is filled with dried seeds or beans, and shaken.

69. Comic legend : STAN LEE
Stan Lee did just about everything at Marvel Comics over the years, from writing to being president and chairman of the board. If you like superhero movies based on the characters from Marvel Comics, then you could spend a few hours trying to spot Stan Lee in those films as he has a penchant for making cameo appearances. Lee can be spotted in “X-Men” (2000), “Spider-Man” (2002), “Hulk” (2003), “Fantastic Four” (2005), “Iron Man” (2008) and many other films.

71. N.B.A. team since 2008 : THUNDER
The Seattle SuperSonics were the professional basketball team based in Seattle from 1967 to 2008, at which time the franchise moved to Oklahoma City (and became the Oklahoma City Thunder).

Down
3. Basic linguistic unit : PHONEME
I’m no linguist and just accept that a “phoneme” is a basic sound in a language. A language is built up from a collection of those basic sounds.

4. Antipoverty agcy. created under L.B.J. : OEO
The Office of Economic Opportunity (OEO) was created during the Lyndon Johnson administration. The agency was responsible for administering the War on Poverty programs that were part of the President Johnson’s Great Society agenda. The OEO was shut down by President Nixon, although some of the office’s programs were transferred to other agencies. A few of the OEO’s programs are still around today, like Head Start for example.

5. Some performances at the Apollo : RAPS
The Apollo Theater in the Harlem district of Manhattan, New York was opened in 1914 as Hurtig & Seamon’s New Burlesque Theater. The original facility was a whites-only venue. When it was opened to African Americans in 1934, the name was changed to the Apollo.

6. Baloney : TRIPE
“Tripe” is an informal term meaning “rubbish, of little value”. Tripe is actually the rubbery lining of say a cow, which in the UK is traditionally eaten with onions.

7. Two-time Wimbledon winner Edberg : STEFAN
Stefan Edberg is a Swedish tennis player, and former world number one. Sadly, one part of Edberg’s legacy is his involvement in a freak accident at the 1983 US Open. A ball struck by Edberg hit one of the linesmen causing him to topple off his chair, fracturing his skull as he hit the ground. That injury was fatal.

8. Lively piano tune : RAG
Ragtime music was at the height of it popularity in the early 1900s. It takes its name from its characteristic “ragged” rhythms. The most famous ragtime composer was Scott Joplin, who had a big hit with his “Maple Leaf Rag” when it was published in 1899. He followed that up with a string of hits, including the “Pine Apple Rag” (sic). Ragtime fell out of favor about 1917 when the public turned to jazz. It had a resurgence in the forties when jazz musicians started to include ragtime tunes in their repertoires. But it was the 1973 movie “The Sting” that brought the true revival, as the hit soundtrack included numerous ragtime tunes by Scott Joplin, including the celebrated “The Entertainer” originally published in 1902.

11. Emily Dickinson, self-descriptively : NOBODY
Emily Dickinson wrote nearly 1800 poems in her lifetime, with less than a dozen published before she died in 1886. Emily’s younger sister discovered the enormous collection, and it was published in batches over the coming decades. Try this one for size:

How dreary to be somebody!
How public, like a frog
To tell your name the livelong day
To an admiring bog!

13. Poet who wrote “You may shoot me with your words, / You may cut me with your eyes” : ANGELOU
Maya Angelou is an African-American autobiographer and poet. Angelou recited her poem “On the Pulse of Morning” at the inauguration of President Clinton in 1983.

24. Per ___ : DIEM
“Per diem” is the Latin for “by the day”. We tend to use the term for a daily allowance for expenses when traveling for work.

26. Corvette feature : T-TOP
Ford manufactured the Thunderbird (T-Bird) from 1955 to 2005, originally as a two-seater sporty convertible. The T-Bird was introduced as a competitor to Chevrolet’s new sports car, the Corvette.

29. Old-fashioned fashion accessories : SPATS
Spats are footwear accessories that cover the ankle and instep. Spats were primarily worn by men, and originally had the purpose of protecting shoes and socks from mud or rain. Eventually, spats became a feature in stylish dress. The term “spats” is a contraction of “spatterdashes”.

41. Crane construction? : ORIGAMI
Origami is the traditional Japanese art form of paper folding. The best-known example of the craft is the paper crane. The word “origami” is derived from “ori“ (folding) and “kami” (paper).

47. ___ City (memorable film destination) : EMERALD
The Emerald City is the capital of the Land of Oz in L. Frank Baum’s series of “Oz” novels.

48. Something never seen at night : MATINEE
“Matinée” is a French word used to describe a musical entertainment held during the daytime. “Matinée” is derived from the word “matin”, meaning “morning”, although here the term is used in the sense of “daylight”.

56. “Love Story” novelist : SEGAL
Erich Segal wrote two hit screenplays, “Yellow Submarine” (the Beatles’ animated movie) and “Love Story” (starring Ryan O’Neal and Ali MacGraw). He wrote the novel “Love Story” after the screenplay. As the novel was published before the film was released, there’s a popular misconception that the movie is based on the book.

57. First extra inning : TENTH
That would be baseball.

62. He married two Hittites to the chagrin of his parents, in Genesis : ESAU
According to the Bible’s Book of Genesis, Esau married Judith and Basemath, the daughters of two Hittites.

67. Channel that became Heartland in 2013 : TNN
Heartland is a country-music oriented television channel that is a revival of the Nashville Network (TNN) that operated from 1983 to 2000. Heartland has been on the air since 2012.