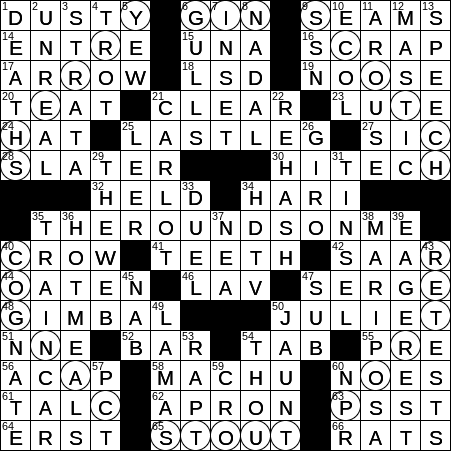 CROSSWORD SETTER: John E. Bennett
THEME: The Round’s On Me!
The circled letters in today’s grid are located AROUND the center, and spell out a list of alcoholic beverages. They list forms a ROUND of drinks, and those drinks are:

Today’s Wiki-est, Amazonian Googlies
Across
6. Winner’s cry in a card game : GIN!
Gin rummy is a variant of the slower game of standard rummy and was introduced in 1909 by one Elwood Baker and his son.

14. ___ nous : ENTRE
In French, something might perhaps be discussed “entre deux” (between two) or “entre nous” (between us).

15. A, in Asunción : UNA
Asunción is the capital city of Paraguay. It is one of the oldest cities in South America, and hence if known as “Mother of Cities”. The city was first visited by Spanish conqueror Juan de Ayolas, and he founded a fort there in 1537 that he called Nuestra Señora Santa María de la Asunción, which is why we use the current name.

17. Hidden symbol between the “E” and “x” in the FedEx logo : ARROW
FedEx began operations in 1973 as Federal Express, but now operates very successfully under it’s more catchy abbreviated name. Headquartered in Memphis with its “SuperHub” at Memphis International Airport, FedEx is the world’s largest airline in terms of tons of freight flown. And due to the presence of FedEx, Memphis Airport has the largest-volume cargo operation of any airport worldwide.

18. Drug for Timothy Leary : LSD
Leary was a psychologist and writer, an icon of the sixties counterculture and a promoter of the use of LSD. Leary popularized the phrase “Turn On, Tune In, Drop Out” in the sixties. After he died, some of Leary’s ashes were “buried” in space, launched aboard a rocket that contained the ashes of 24 other people including “Star Trek” creator Gene Roddenberry.

23. Elizabethan stringed instrument : LUTE
The lute is a stringed instrument with a long neck and usually a pear-shaped body. It is held and played like a guitar, and was popular from the Middle Ages right through to the late Baroque era. A person who plays the lute can be referred to as a “lutenist”.

24. Fedora or fez : HAT
A fedora is a lovely hat, I think. It is made of felt, and is similar to a trilby, but has a broader brim. “Fedora” was a play written for Sarah Bernhardt and first performed in 1889. Bernhardt had the title role of Princess Fedora, and on stage she wore a hat similar to a modern-day fedora. The play led to the women’s fashion accessory, the fedora hat, commonly worn by women into the beginning of the twentieth century. Men then started wearing fedoras, but only when women gave up the fashion …

27. [their error, not mine] : SIC
[Sic] indicates that a quotation is written as originally found, perhaps including a typo. “Sic” is Latin for “thus, like this”. The term is more completely written as “sic erat scriptum”, which translates as “thus was it written”.

28. Actor Christian of “Mr. Robot” : SLATER
Christian Slater is an actor from New York City. My favorite roles that he has played are in “Broken Arrow” with John Travolta, and on the TV series “The West Wing”.

34. Mata ___ (spy) : HARI
Mata Hari was the stage name used by Margaretha Geertruida Zella, born in the Netherlands in 1876. After an unsuccessful and somewhat tragic marriage, Zella moved to Paris in 1903 where she struggled to make a living. By 1905 she was working as an exotic dancer and using the name Mata Hari. She was a successful courtesan, notably moving in various circles of high-ranking military officers. She apparently worked as a double agent, both for the French and the Germans. When Mata Hari was accused by the French of passing information to the enemy, she was tried, found guilty and executed by firing squad at the height of WW1, in 1917.

42. Coal-rich German region : SAAR
The Saar is a river that rises on the border between Alsace and Lorraine in France, flows through western Germany and finally enters the Moselle. Historically the Saar river valley was an important source for coal, iron and steel.

44. Like Cheerios cereal : OATEN
Cheerios breakfast cereal has the distinction of being the first oat-based cereal introduced into the market, hitting the grocery store shelves in 1941. Back then, “Cheerios” were known as CheeriOats.

46. “Facilities,” informally : LAV
Our word lavatory (sometimes “lav”) originally referred to a washbasin, and comes from the Latin “lavatorium”, a place for washing. In the 1600s a “lavatory” came to mean a washroom, and in the 1920s a toilet.

47. Suit material : SERGE
Serge is a type of twill fabric with diagonal ridges on both sides. The name “serge” comes from the Greek word for “silken”.

48. Device that keeps a ship’s compass level : GIMBAL
A “gimbal” is a pivoted support, usually in the shape of a ring. The supported item is located in the center of the ring. One gimbal allows the supported item to tilt freely around one axis. By using two gimbals, one inside the other, the item can tilt freely in two directions. A ship’s compass is often housed within three gimbals. The two gimbals tend to isolate the compass from the movement of the ship in all three axes.

50. “O Romeo, Romeo!” crier : JULIET
In William Shakespeare’s play “Romeo and Juliet”, the lovers discuss the sad fact that they have been born into two feuding families in the famous balcony scene. Juliet says:

58. ___ Picchu, site of ancient Inca ruins : MACHU
Machu Picchu is known as “The Lost City of the Incas”, and it can be visited on a mountain ridge in Peru, 50 miles northwest of the city of Cuzco in the southeast of the country. The name Machu Picchu means “old peak”. The Inca Trail to Machu Picchu originates about 50 miles from Cusco on the Urubamba River in Peru. It can take travelers about 5 days to trek the full length of the trail, passing through many Incan ruins before reaching the Sun Gate on Machu Picchu mountain. The trail was becoming greatly overused, forcing the Peruvian government to limit the number of people on the trail each day to 500. Book early …

61. Bathroom powder : TALC
Talc is a mineral, actually hydrated magnesium silicate. Talcum powder is composed of loose talc, although these days “baby powder” is also made from cornstarch.

62. Trimmed area around a green : APRON
That would be on a golf course.

64. Once, in olden days : ERST
“Erst” is an archaic way of saying “formerly, before the present time”. The term is mostly seen as part of the word “erstwhile”, an adjective meaning “of times past”.

Down
8. Longtime Federer adversary : NADAL
Rafael “Rafa” Nadal is a Spanish tennis player, noted for his expertise on clay courts, earning him the nickname “The King of Clay”.

9. Personal identifier, for short : SSN
The main purpose of a Social Security Number (SSN) is to track individuals for the purposes of taxation, although given its ubiquitous use, it is looking more and more like an “identity number” to me. The social security number system was introduced in 1936. Prior to 1986, an SSN was required only for persons with substantial income so many children under 14 had no number assigned. For some years the IRS had a concern that a lot of people were claiming children on their tax returns who did not actually exist. So, from 1986 onward, it is a requirement to get an SSN for any dependents over the age of 5. Sure enough, in 1987 seven million dependents “disappeared”.

12. Tile adhesive : MASTIC
Mastic is a resin taken from the mastic tree. The resin can be dried then chewed like a gum. It is this characteristic that gave the tree its name, as the Greek verb “mastichein” means “to gnash the teeth”. This is the same Greek root that gives us our word “masticate” meaning to chew. Mastic is also used in varnishes that might perhaps protect an oil painting. It is from this usage that the name “mastic” was applied to commercial preparations used as protective coatings or adhesives.

26. Big name in bicycle helmets : GIRO
Giro is a manufacturer primarily of helmets used by cyclists and skiers. Founded in 1985, the company is based in Scotts Valley, California.

29. What Wi-Fi can connect you to : THE WEB
In essence, the World Wide Web is a vast collection of documents that is accessible using the Internet, with each document containing hyperlinks which point to other documents in the collection. So the “Web” is different from the Internet, although the terms are often used interchangeably. The Web is the collection of documents, and the Internet is global network of computers on which the documents reside. The Web was effectively the invention of British computer scientist Tim Berners-Lee. The key to Berner-Lee’s invention was bringing together two technologies that already existed: hypertext and the Internet. I for one am very grateful …

31. Yule glitter : TINSEL
The custom of decorating trees at Christmas seems to have originated in Renaissance Germany. Those first trees were placed in guildhalls and were decorated with sweets and candy for the apprentices and children. After the Protestant Reformation, the Christmas tree became an alternative in Protestant homes for the Roman Catholic Christmas cribs. The Christmas tree tradition was imported into Britain by the royal family because of its German heritage. That tradition spread from Britain into North America.

33. Highlight in a Zorro movie : DUEL
The character Zorro was created by Johnston McCulley in 1919 for a series of stories and pulp fiction, the first title being “The Curse of Capistrano”. The name “Zorro” is the secret identity of a Spanish colonial nobleman called Don Diego de la Vega.

35. Sleeper or caboose : TRAIN CAR
The word “caboose” originally came from Middle Dutch and was the word for a ship’s galley. When the last car in a train in North America was given a stove for the comfort of the crew, it took on the name “caboose”. The term has also become slang for a person’s backside.

59. ___-Magnon : CRO
Remains of early man, dating back to 35,000 years ago, were found in Abri de Cro-Magnon in southwest France, giving the name to those early humans. Cro-Magnon remains are the oldest human relics that have been discovered in Europe.

60. “Wait Wait … Don’t Tell Me!” airer : NPR
Chicago Public Radio produces one of my favorite radio shows, “Wait Wait… Don’t Tell Me!” It is indeed a fun game show, hosted by Peter Sagal. The “Morning Edition” newsreader Carl Kasell used to act as judge and scorekeeper, until he retired in 2014. There should be more game shows of that ilk on the radio, in my humble opinion …