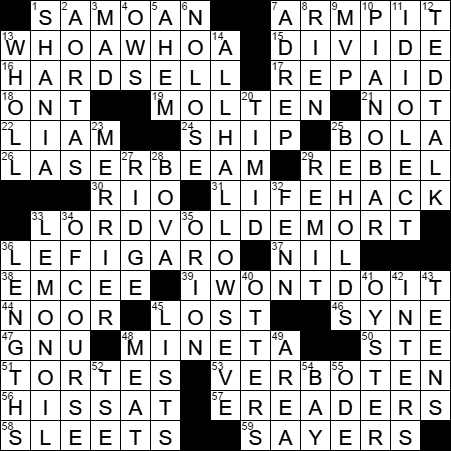 7. Axilla : ARMPIT
“Axilla” is the anatomical name for armpit, not to be confused with “maxilla”, the upper jawbone.

18. London locale: Abbr. : ONT
The city of London, Ontario lies about halfway between Detroit, Michigan and Toronto, Ontario. Just like the city’s better known namesake in England, Canada’s London is located on a river called the Thames.

21. Certain logic gate : NOT
Digital systems are made up from series of logic gates, electronic circuits with one or more inputs but only one output. Logic gates are named for the relationship between the input and output, and can be AND gates, OR gates or perhaps NOT gates.

22. One Direction member Payne : LIAM
One Direction is a UK-based boy band. Each member of the band competed in the reality show “The X Factor”, and didn’t do very well. The five were then combined in a boy band at a later stage of the competition. They only finished in third place, but I don’t think they care. They’re doing very, very well for “losers” …

25. Limb-entangling weapon : BOLA
Bolas are heavy balls connected by cords that constitute a throwing weapon. Bolas are often used to capture animals by tripping them as they run. The weapon is usually associated with gauchos, the South American cowboys, although there is evidence that the Inca army used them in battle.

26. One nearly cut Bond in half in “Goldfinger” : LASER BEAM
There’s a famous scene in the James Bond movie 1964 “Goldfinger” when 007 is shackled to a table and in danger of being cut in half by an industrial laser. The scene is inspired by a situation in the 1959 novel by Ian Fleming. However, lasers hadn’t been invented at the time of the book’s writing, and so in print, Bond had to escape from a circular saw.

30. 1983 double-platinum album by Duran Duran : RIO
Duran Duran is a New Wave band from Birmingham in England. Duran Duran’s success was partially driven by some well-received MTV music videos in the 1980s. The band also worked hard on their image and paid a lot of money for very fashionable clothes in which they performed. As a result, one of Duran Duran’s nicknames is “the prettiest boys in rock”.

31. Everyday productivity enhancer, in modern lingo : LIFE HACK
A “life hack” is a technique that makes a routine task easier or more efficient. The term was coined in 2004 by journalist Danny O’Brien when describing less-than-elegant shortcuts used by IT professionals.

33. Fictional character whose name is French for “flight of death” : LORD VOLDEMORT
Lord Voldemort (born Tom Marvolo Riddle) is the main “bad guy” in the “Harry Potter” series of books. I heard author J. K. Rowling on the radio some time back and she tells us that “Voldemort” is supposed to be pronounced with a silent “t” on the end, so it sounds kind of French. But when the movies came out the actors went with the hard “t”, and that’s the pronunciation that seems to prevail now. It seems to be generally accepted that Rowling chose the name from the French “vol de mort” meaning “flight of death”.

36. Leading newspaper that took its name from a stage comedy : LE FIGARO
“Le Figaro” is one of the main French daily newspapers, along with “Le Parisien” and “Le Monde”. It was founded as a satirical publication in 1826, with the title a reference to the Pierre Beaumarchais comedy play “The Marriage of Figaro”.

38. One making introductions : EMCEE
The term “emcee” comes from “MC”, an initialism standing for Master or Mistress of Ceremonies.

44. Queen dowager of Jordan : NOOR
Queen Noor is the widow of King Hussein of Jordan. Queen Noor was born Lisa Halaby in Washington, D.C., the daughter of Najeeb Halaby. Her father was appointed by President Kennedy as the head of the Federal Aviation Administration, and later became the CEO of Pan Am. Lisa Halaby met King Hussein in 1977, while working on the design of Jordan’s Queen Alia Airport. The airport was named after King Hussein’s third wife who had been killed that year in a helicopter crash. Halaby and the King were married the next year, in 1978.

Originally, a dowry was money that was set aside by a man for his wife and children, to be used in the event that he passed away. A widow who receives said money was known as a “dowager”. Over time, “dowry” became a term used for the money, goods or estate that a woman brought into a marriage, and “dowager” came to mean an elderly woman with an elevated social position.

46. Ago, in an annual song : SYNE
The song “Auld Lang Syne” is a staple at New Year’s Eve (well, actually in the opening minutes of New Year’s Day). The words were written by Scottish poet Robbie Burns. The literal translation of “Auld Lang Syne” is “old long since”, but is better translated as “old times”. The sentiment of the song is “for old time’s sake”.

47. Animal with horns : GNU
A gnu is also known as a wildebeest, an antelope that is native to Africa. Wildebeest is actually the Dutch word for “wild beast”.

48. Norman ___, first Asian-American to hold a cabinet post : MINETA
Norman Mineta is a democrat who served as Secretary of Transportation in the George W. Bush administration. Mineta served for over five in the post, resigning in 2006, making him the longest serving Transportation Secretary ever. Mineta was born to Japanese immigrant parents and spent some of his childhood years with his family in an internment camp in Wyoming during WWII.

51. Princess cake and others : TORTES
A princess cake is a traditional layer cake from Sweden comprising sponge cake, pastry cream and whipped cream topped off by marzipan. Known as “prinsesstårta” in Swedish, the “princess cake” was a favorite of the daughters of Prince Carl, Duke of Västergötland, hence the name.

53. Simply not done : VERBOTEN
“Verboten” is the German word for “forbidden”, a word that we have imported into English.

58. Mixed forecasts? : SLEETS
Apparently “sleet” is a term used to describe two weather conditions. One is a shower of ice pellets, smaller than hail, and the second is a mixture of rain and snow, with the snow melting as it falls.

59. N.F.L. Hall-of-Famer nicknamed “The Kansas Comet” : SAYERS
Gale Sayers is a former NFL running back in the sixties and seventies. Speedy Gale Sayers is from Wichita, and is nicknamed “The Kansas Comet”. Sayers was famously supportive of his fellow chicago Bear Brian Piccolo, who was stricken with cancer. The friendship between the players was portrayed in a 1971 movie called “Brian’s Song”.

Down
1. Singer Twain : SHANIA
Shania Twain is a country and pop singer from Windsor, Ontario. Shania’s birth name was Eileen Edwards, and this changed to Eilleen Twain when her mother remarried. Twain changed her name to Shania in the early 1990s, around the same time that her musical career started to take off.

2. Blood lines : AORTAS
The aorta originates in the heart and extends down into the abdomen. It is the largest artery in the body.

8. Nothing, in Nantes : RIEN
Nantes is a beautiful city located on the delta of the Loire, Erdre and Sèvre rivers. It has the well deserved nickname of “The Venice of the West”. I had the privilege of visiting Nantes a couple of times on business, and I can attest that it really is a charming city …

9. Chant often heard toward the end of an N.B.A. season : MVP!
MVP (most valuable player)

10. Rick’s, for one : PIANO BAR
The fictional Rick’s Café Américain is the main setting used in the movie “Casablanca”, with the café owner played by Humphrey Bogart. Should you ever visit Morocco, you might try visiting Rick’s Café Casablanca, an establishment opened in 2004 that largely recreates the look and feel of the memorable movie set.

11. Speech habits unique to an individual : IDIOLECT
An individual’s speech pattern is referred to as his or her “idiolect”. The idiolect comprises the vocabulary, grammar and pronunciation used by a person.

12. The first one was delivered in 1984 : TED TALK
The acronym TED stands for Technology Entertainment and Design. TED is a set of conferences held around the world by a non-profit group called the Sapling Foundation. The conference subjects are varied, and the meetings are often led by big names such as Bill Clinton, Al Gore, Bill Gates and Jane Goodall. The Sapling Foundation then makes recordings of the conferences available for free online with the intent of disseminating the ideas globally. These conferences are known as “TED Talks”.

20. Pusillanimous : TIMID
Someone described as “pusillanimous” lacks courage and resolution. The term comes into English via Middle French from the Latin “pusillis” meaning “very weak” and “animus” meaning “spirit”.

The Hugo Awards are presented annually for excellence in science fiction and fantasy writing. The awards are named for Hugo Gernsback, who founded the sci-fi magazine “Amazing Stories”.

32. Actress Sherilyn who was an Emmy nominee for “Twin Peaks” : FENN
Sherilyn Fenn is the actress who played Audrey Horne on “Twin Peaks” in the nineties. Fenn also played the title roles in the 1993 romantic drama film “Boxing Helena” and the 1995 TV biopic “Liz: The Elizabeth Taylor Story”.

35. NASA spacecraft designed for travel to Mars : ORION
NASA is developing a spacecraft for human exploration of asteroids and of Mars. The craft is known as the Orion MPCV (Multi-Purpose Crew Vehicle).

41. With 54-Down, longtime Long Island home of Theodore Roosevelt : OYSTER
(54D. See 41-Down : BAY)
President Theodore Roosevelt and his wife Edith lived much of their lives in a 22-room mansion near Oyster Bay on the north shore of Long Island, New York. Named Sagamore Hill, the home was also known as the “Summer White House” in the years that President Roosevelt was in office.

52. The Nikkei 225 is one of its indexes: Abbr. : TSE
The Tokyo Stock Exchange (TSE) is the third largest stock exchange in the world, after New York and London.

55. Some lines of Milton : ODE
English poet John Milton is best known for his epic poem “Paradise Lost”. Milton also wrote several sonnets, the most famous of which is probably “On His Blindness”. The poet developed glaucoma which rendered him completely blind so he had to dictate a lot of his work, including the whole of “Paradise Lost”.