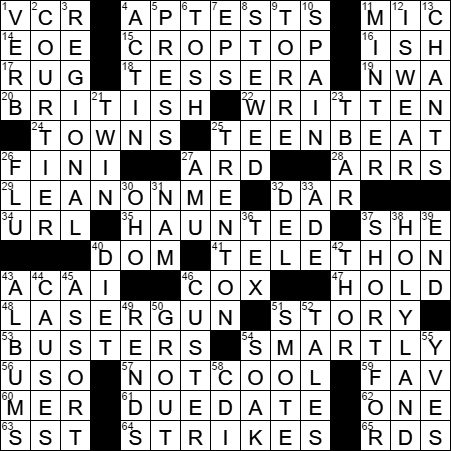 35A. Full of ghosts … like four answers in this puzzle? : HAUNTED

4. European History and Physics C: Mechanics, for two : AP TESTS
The Advanced Placement (AP) program offers college-level courses to kids who are still in high school. After being tested at the end of the courses, successful students receive credits that count towards a college degree.

18. Tile in a mosaic : TESSERA
A tessera is an individual tile used in making a mosaic. Tesserae are usually formed in the shape of cubes.

19. The “World’s Most Dangerous Group” : NWA
NWA was a hip hop group from Compton, California. The original five group members included rappers who have made a name for themselves as solo acts, including: Dr. Dre and Ice Cube. The story of NWA is told in a 2015 film, also called “Straight Outta Compton”. I hear that the movie was well received, although I probably won’t be seeing it …

29. #1 hit for Bill Withers (1972) and Club Nouveau (1987) : LEAN ON ME
Bill Withers was working as an assembly operator while he was trying to make a name for himself in the music industry. Even as he found success with his glorious 1971 single “Ain’t No Sunshine”, he held onto his day job, worried that the music industry was unpredictable.

“Club Nouveau” is an R&B band that formed in 1986 in Sacramento, California. The group’s biggest hit is a 1986 cover version of the Bill Withers song “Lean on Me”.

32. ___ es Salaam : DAR
Dar es Salaam is the largest city in Tanzania, and sits right on the east coast of Africa. The city’s name is usually translated from Arabic as “Haven of Peace”.

37. “Now I ain’t sayin’ ___ a gold digger” (Kanye West lyric) : SHE
Kanye West is a rap singer who was born in Atlanta and raised in Chicago. He also spent some time in Nanjing, China as a child, where his mother was teaching as part of an exchange program. West is married to reality star Kim Kardashian.

40. ___ Pérignon (brand of bubbly) : DOM
Dom Pérignon is the name given to the prestige label of champagne from Moët et Chandon, the French winery. The label’s name honors the Benedictine monk, Dom Pérignon, who helped to improve the quality and production of champagne in the early 18th century. Although Dom Pérignon made major contributions to champagne production, many of the stories in which he figures are just myths. He did not “invent” champagne, nor sparkling wine in general. Nor did he say the famous words, “Come quickly, I am drinking the stars!”. That lovely line first appeared in a print advertisement in the late 1800s!

41. Milton Berle hosted the world’s first one : TELETHON
The world’s first telethon was took place in 1949. It was a 16-hour fundraiser hosted by Milton Berle that raised over a million dollars for the Damon Runyon Cancer Research Foundation. The term “telethon”, a portmanteau of “television” and “marathon”, was coined in the news media the day after the event.

Comedian Milton Berle was known as “Uncle Miltie” and “Mr. Television”, and was arguably the first real star of American television as he was hosting “Texaco Star Theater” starting in 1948.

43. Berry said to have anti-aging qualities : ACAI
Açaí is a palm tree native to Central and South America. The fruit has become very popular in recent years and its juice is a very fashionable addition to juice mixes and smoothies.

46. Crew leader, for short : COX
The coxswain of a boat is one in charge, particularly of its steering and navigation. The name is shortened to “cox” particularly when used for the person steering and calling out the stroke in a competition rowing boat.

47. Advice between “buy” and “sell” : HOLD
That would be in the stock market.

53. Monster film hit of 1984 : (GHOST)BUSTERS
1984’s “Ghostbusters” really is an entertaining movie. It stars Bill Murray and Harold Ramis, and was directed by Ivan Reitman (a trio that also worked together on 1981’s “Stripes”). The first draft of the screenplay was written by another star of the movie, Dan Aykroyd. Aykroyd originally envisioned “Ghostbusters” as a vehicle for himself and John Belushi, but sadly Belushi passed away before the project could be realized.

56. Grp. that brought Colbert to Baghdad : USO
The United Service Organization (USO) was founded in 1941 at the request of FDR “to handle the on-leave recreation of the men in the armed forces”. A USO tour is undertaken by a troupe of entertainers, many of whom are big-name celebrities. A USO tour usually includes troop locations in combat zones.

63. It went boom, for short : SST
The most famous supersonic transport (SST) is the retired Concorde. Famously, the Concorde routinely broke the sound barrier, and cruised at about twice the speed of sound. Above Mach 2, frictional heat would cause the plane’s aluminum airframe to soften, so airspeed was limited.

64. Repeat offenses, metaphorically : STRIKES
About half of the fifty US states have “three-strikes” laws, statutes that mandate courts to impose harsher sentences on an offender who has previously been convicted to two prior serious offenses.

Down
6. Comedian Daniel : TOSH
Daniel Tosh is a stand-up comedian and host of “Tosh.0”, a video clip show on Comedy Central.

7. Brief records, in brief : EPS
An extended-play record, CD or download (EP) contains more music than a single, but less than an LP.

10. 4,200 feet, for the Golden Gate Bridge : SPAN
The Golden Gate is the opening of San Francisco Bay into the Pacific Ocean. The bridge that spans the Golden Gate is called “the Golden Gate Bridge” and was opened in 1937. At that time it was the longest suspension bridge in the world. One of the most eerie things about the Golden Gate Bridge is that is the second most popular place in the whole world to commit suicide (after the Nanjing Yangtze River Bridge). Steps have been taken to reduce the number of suicides, including suicide hotline telephones placed along the walkway, but still there is one suicide every two weeks on average throughout the year. There are plans to place a purpose-built net below the bridge as a deterrent, at a cost of tens of millions of dollars.

25. Home of the Thunder, the Double-A affiliate of the Yankees : TRENTON
The city of Trenton, New Jersey was first settled in 1679 by Quakers. The settlement was named Trent-towne in 1719 in honor of William Trent, who was one of the biggest landowners in the area. The name “Trent-towne” was later shortened to Trenton. The city was the site of George Washington’s first military victory in the Revolutionary War, in 1776. Because of the Battle of Trenton, the New Jersey capital is sometimes called the “Turning Point of the Revolution”.

26. Certain bug : FLU
Influenza (flu) is an ailment that is caused by a virus. The virus is readily inactivated by the use of soap, so washing hands and surfaces is especially helpful in containing flu outbreaks.

27. ___ Darya : AMU
The Amu Darya is a major river in Central Asia that empties into the Aral Sea. It is also called the Oxus or Amu River.

31. “Smokey, this is not ___. This is bowling. There are rules” (“The Big Lebowski” quote) : NAM
“The Big Lebowski” is a 1998 comedy directed by Joel and Ethan Coen, and starring Jeff Bridges in the title role. The film’s script is loosely based on the Raymond Chandler novel “The Big Sleep”. I thought “The Big Lebowski” was just “okay” though …

32. Joe Biden’s home: Abbr. : DEL
Vice President Joe Biden was a US Senator representing the state of Delaware from 1973 until he joined the Obama administration. While he was a senator, Vice President Biden commuted to Washington from Wilmington, Delaware almost every working day. He was such an active customer and supporter of Amtrak that the Wilmington Station was renamed as the Joseph R. Biden Railroad Station in 2011. Biden has made over 7,000 trips from that station, and the Amtrak crews were known to even hold the last train for a few minutes so that he could catch it. Biden earned himself the nickname “Amtrak Joe”.

33. Suffix with hater : -ADE
An extremely negative person might be described as having “drunk the haterade”, a play on the beverage Gatorade.

36. Ted Cruz’s home: Abbr. : TEX
US Senator Ted Cruz served as Solicitor General for the state of Texas before heading to Washington. Cruz was appointed Solicitor General in 2003 at the age of 32, making him the youngest Solicitor General in the country. Famously, Cruz is an opponent of the Affordable Care Act and made a speech in 2013 in the US Senate on the subject that lasted for 21 hours and 19 minutes. It was the fourth longest speech in the history of the Senate.

38. Suriname colonizer : HOLLAND
The Republic of Suriname is located on the northeast coast of South America, and is the continent’s smallest country. What is now Suriname fell under Dutch rule in the late 1600s, gaining independence in 1975.

39. Last song recorded by all four Beatles, with “the” : END
“The End” is a Beatles song composed by Paul McCartney. It is the final song in a medley found on side two of the 1969 album “Abbey Road”. The song is mainly remembered as the last one recorded collectively by all four Beatles.

40. German article : DIE
The definite article in German is der, die or das, for masculine, feminine and neuter nouns. The indefinite article is ein, eine or ein, again depending on the gender of the noun. A further complication, relative to English, is that the masculine form (and only the masculine form) of the article changes when used in the accusative case, when used with the object of a sentence. The accusative forms are “den” and “einen”.

43. Reunion attendees : ALUMS
An “alumnus” (plural … alumni) is a graduate or former student of a school or college. The female form is “alumna” (plural … alumnae). The term comes into English from Latin, in which alumnus means foster-son or pupil. “Alum” is an informal term used for either an alumna or an alumnus.

50. Joint ailment : GOUT
Gout is caused by an elevation of the levels of uric acid in the blood. As a result of the high concentrations, the uric acid can crystallize out in tissue causing extreme discomfort. What we tend to call gout occurs when the crystals are deposited in the big toe.

55. Fashion’s ___ Saint Laurent : YVES
Yves Saint-Laurent (YSL) was a French fashion designer, actually born in Algeria. Saint-Laurent started off working as an assistant to Christian Dior at the age of 17. Dior died just four years later, and as a very young man Saint-Laurent was named head of the House of Dior. However, in 1950 Saint-Laurent was conscripted into the French Army and ended up in a military hospital after suffering a mental breakdown from the hazing inflicted on him by his fellow soldiers. His treatment included electroshock therapy and administration of sedatives and psychoactive drugs. He was released from hospital, managed to pull his life back together and started his own fashion house. A remarkable story …