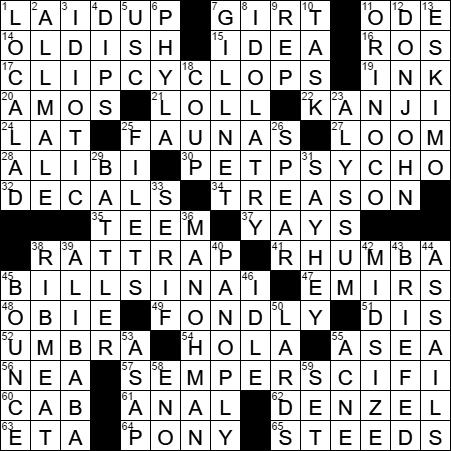 Today’s Wiki-est, Amazonian Googlies
Across
11. “___ on Melancholy” : ODE
“Ode on Melancholy” was one of the so-called “1819 Odes” written by the poet John Keats, a collection that included famous poems such as “Ode on a Grecian Urn”, “Ode to a Nightingale” and “Ode to Psyche”.

16. Children’s author Asquith : ROS
Ros Asquith writes the “Teenage Worrier” books aimed at teens, as well as cartoons for “The Guardian” newspaper in the UK.

17. Give an “Odyssey” character a trim? : CLIP CYCLOPS (from “clip-clops”)
Cyclops was a one-eyed giant in Greek and Roman mythology. Cyclops lived in Mount Etna, the Sicilian volcano.

20. Old Testament book that asks “Does a lion roar in the thicket when it has no prey?” : AMOS
Amos is one of the twelve minor prophets in the Hebrew Bible.

24. Back muscle, informally : LAT
The muscles known as the “lats” are the latissimi dorsi, the broadest muscles in the back. “Latissimus” is the Latin for “broadest” and “dorsum” is Latin for “back”.

28. Cover story : ALIBI
“Alibi” is the Latin word for “elsewhere” as in, “I claim that I was ‘elsewhere’ when the crime was committed … I have an ‘alibi’”.

32. Windshield decorations : DECALS
A decal is a decorative sticker, short for “decalcomania”. The term is derived from the French “décalquer”, the practice of tracing a pattern from paper onto glass or perhaps porcelain.

34. Act of sedition : TREASON
Treason is a serious crime committed against the nation (or the sovereign). One who commits “treason” is called a “traitor”. In the past, the term treason also applied to lesser crimes (like a woman killing her husband) so there was a differentiation between high treason against the king, and “petit treason”, against a more common citizen.

45. Invoice a whole Mideast peninsula? : BILL SINAI (from “Bill Nye”)
The Sinai Peninsula is in the eastern part of Egypt, the triangular peninsula bounded by the Mediterranean to the north and the Red Sea to the south. It is the only part of Egypt that lies in Asia as opposed to Africa. The eastern land border of the peninsula is shared with Israel, and Israel occupied the Sinai during the 1956 Suez Crisis and the Six Day War of 1967.

47. OPEC dignitaries : EMIRS
The OPEC cartel (the Organization of the Petroleum Exporting Countries) was formally established in 1960 and has been headquartered in Vienna since 1965. The US is actually the third largest oil producer in the world (after Russia and Saudi Arabia). One reason America isn’t in OPEC, even though we are a big producer, is that we import a lot more than we export. But we all probably knew that already …

48. Annual New York honor : OBIE
The Obies are the “Off-Broadway Theater Awards”. The Obies are presented annually and the recipients are chosen by “The Village Voice” newspaper.

51. Talk smack about : DIS
“Dis” is a slang term meaning “insult” that originated in the eighties. It is a shortened form of “disrespect” or “dismiss”.

52. Shadow : UMBRA
A shadow usually has three distinct parts called the umbra, penumbra and antumbra, with the terms most often used with reference to the shadows cast by celestial bodies. The terms can also be used to describe the levels of darkness in sunspots. The umbra (Latin for “shadow”) is the innermost, darkest part of a shadow. The penumbra (“almost shadow”, from Latin) is a lighter part of a shadow, where part of the light source “leaks” around the body casting the shadow. The antumbra phenomenon is experienced when the object casting the shadow is sufficiently far away from the viewer so that it appears smaller than the light source, with an annular ring around it. When the eye is in the shadow cast by an object that has light passing around it, the eye is in the antumbra.

54. Barrio greeting : HOLA
“Hola” is Spanish for the greeting “hi”.

56. PBS backer : NEA
The National Endowment for the Arts (NEA) is an agency funded by the federal government that offers support and financing for artistic projects. The NEA was created by an Act of Congress in 1965. Between 1965 and 2008, the NEA awarded over $4 billion to the arts, with Congress authorizing around $170 million annually through the eighties and much of the nineties. That funding was cut to less than $100 million in the late nineties due to pressure from conservatives concerned about the use of funds, but it is now back over the $150 million mark. I wonder how long that will last though …

The Public Broadcasting Service (PBS) was founded in 1970, and is my favorite of the broadcast networks. I love PBS’s drama and science shows in particular, and always watch the election results coming in with the NewsHour team.

“Philadelphia” is a groundbreaking 1993 film starring Tom Hanks and Denzel Washington. The movie was one of the first out of Hollywood to deal with HIV/AIDS and homophobia as a central theme. Hanks won that season’s Best Actor Oscar for his performance, and Bruce Springsteen won the Oscar for Best Original Song with “Streets of Philadelphia”.

65. Silver and others : STEEDS
Famously, the Lone Ranger’s horse was called Silver and Tonto’s mount was named Scout. But in the early shows, Tonto rode a horse called White Feller.

Down
2. Like Wabash College : ALL-MALE
Wabash College is an all-male school in Crawfordsville, Indiana that was founded in 1832 as the Wabash Teachers Seminary and Manual Labor College. Wabash is one of only three all-male liberal arts colleges left in the US. The other two are Hampden-Sydney College in Virginia and Morehouse College in Georgia.

5. The Gamecocks of the N.C.A.A. : USC
The University of South Carolina’s sports teams have gone by the moniker “Gamecocks” since about 1900. The name was chosen in honor of a South Carolina revolutionary war hero named Thomas Sumter. Sumter’s nickname was the Carolina Gamecock, as British General Banastre Tarleton once said that Sumter “fought like a gamecock”.

7. Controversial fish catcher : GILL NET
A fisherman’s gill net hangs vertically in the water, with small floats holding the upper edge of the net on the surface. The net has a mesh sized so that the only the heads of the targeted fish can pass. The mesh gets entangled in the flaps covering the gills, so the fish cannot escape. Gil nets are so effective that they are banned in some states in order to protect fishery stocks.

11. River that’s home to the black spot piranha : ORINOCO
The Orinoco is a major river in South America, flowing through Venezuela and Colombia.

Piranhas are reputed to be able to strip an animal to its bones in seconds, but this is somewhat of a myth. Piranhas are not in fact strict carnivores, and usually are more of a nuisance to fishermen rather than a danger, as they tend to eat bait that has been set to catch other fish. Much of the reputation of the piranha is owed to the description written by President Theodore Roosevelt in his book “Through the Brazilian Wilderness”. President Roosevelt was somewhat hoodwinked though, as local fishermen put on a special “show” for him. They dumped hordes of hungry piranhas into a dammed section of a river and then tossed in a sliced up cow. President Roosevelt was pretty impressed by the orchestrated feeding frenzy.

12. “Much Ado About Nothing” villain : DON JOHN
“Much Ado About Nothing” is a play by William Shakespeare, a favorite of mine. It is a comedic tale of two pairs of lovers with lots of mistaken identities and double meanings. I once saw it performed in the fabulous Globe Theatre in London … by an all-female cast. Such a performance was somewhat ironic, given that in Shakespeare’s day the practice was to use an all-male cast.

13. White house occupant? : ESKIMO
Although still used in the US, the term “Eskimo” tends to be avoided in Canada and Greenland as there it is considered pejorative.

18. Masterstroke : COUP
A coup d’état (often just “coup”) is the sudden overthrow of a government, and comes from the French for “stroke of state”. The Swiss-German word “putsch” is sometimes used instead of “coup”, with “Putsch” translating literally as “sudden blow”. Both terms are also used today in a more general sense to describe a masterstroke.

23. “Sweet” plant of the mustard family : ALYSSUM
Alyssum is a genus of over a hundred species of flowering plant. The species we know as Sweet Alyssum is just one of many, and is known more formally as Lobularia maritima.

25. Sole orders : FILETS
The group of flatfish known as soles take their name from “solea”, the Latin word for “sandal”. And, they kind of have that shape.

31. Willie Mays descriptor : SAY HEY
Willie Mays’ nickname was the “Say Hey Kid”, although his friends and teammates were more likely to refer to him as “Buck”. When Mays was inducted into the Baseball Hall of Fame, he was asked who was the best player he’d ever seen in the game. He replied, “I don’t mean to be bashful, but I was.”

33. Letter embellishment : SERIF
Serifs are details on the ends of characters in some typefaces. Typefaces without serifs are known as sans-serif, using the French word “sans” meaning “without” and “serif” from the Dutch “schreef” meaning “line”. Some people say that serif fonts are easier to read on paper, whereas sans-serif fonts work better on a computer screen. I’m not so sure though …

38. Barbecuer’s supply : RIB MEAT
It is believed that our word “barbecue” (BBQ) comes from the Taíno people of the Caribbean in whose language “barbacoa” means “sacred fire pit”.

39. Hero of a tale told by Scheherazade : ALI BABA
There is some controversy about the story “Ali Baba and the Forty Thieves” in that it has been suggested it was not part of the original collection of Arabic tales called “One Thousand and One Nights”. The suggestion is that the Ali Baba tale was added by one of the European translators of the collection.

Scheherazade was a Persian queen of legend, and the storyteller in the wonderful “One Thousand and One Nights”.

40. Impressive collection : PANOPLY
“Panoply” originally described the complete set of armor of a warrior, with the term coming from the Greek “pan-”meaning “all” and “hopla” meaning “arms”. We’ve been using “panoply” to mean “any splendid array” since the 1820s.

50. Enriches, in a way : LARDS
Fat, when extracted from the carcass of an animal, is called “suet”. Untreated suet decomposes at room temperature quite easily so it has to be “rendered” or purified to make it stable. Rendered fat from pigs is what we call “lard”. Rendered beef or mutton fat is known as “tallow”.

58. Collaborator on several David Bowie albums : ENO
Brian Eno is a musician, composer and record producer from England who first achieved fame as the synthesiser player with Roxy Music. As a producer, Eno has worked with David Bowie, Devo and U2.