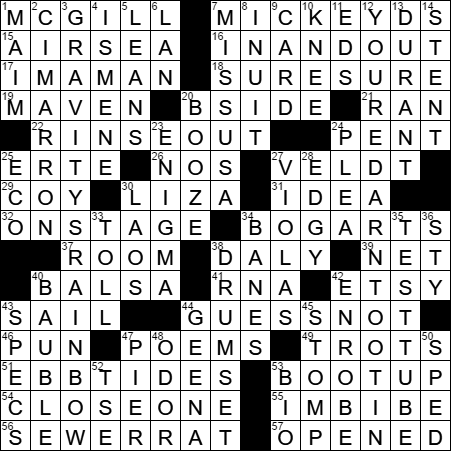 Today’s Wiki-est, Amazonian Googlies
Across
1. Rugby rival of Harvard : MCGILL
McGill University is a school in Montreal that was founded in 1821. The university was formed from the preexisting McGill College that had been established using a grant from Montreal merchant James McGill.

7. It operates Hamburger U. : MICKEY D’S
The McDonald’s fast-food restaurant chain is sometimes referred to as “Mickey D’s”.

19. Buff : MAVEN
I’ve always loved the word “maven”, another word for an expert. Maven comes into English from the Yiddish “meyvn” meaning someone who appreciates and is a connoisseur.

A “buff”, “fiend” or a “nut” is one who is extremely enthusiastic and knowledgeable about a subject.

22. Free of shampoo, say : RINSE OUT
Back in the 1760s, the verb “to shampoo” was an Anglo-Indian word meaning “to massage”. A century later we started to shampoo our hair.

25. “Cleopatre” artist : ERTE
Erté was the pseudonym of French (Russian born) artist and designer Romain de Tirtoff. Erté is the French pronunciation of his initials “R.T.” Erté’s diverse portfolio of work included costumes and sets for the “Ziegfeld Follies” of 1923, as well as productions of the Parisian cabaret show “Folies Bergère”. Erté’s most famous work by far is an image titled “Symphony in Black”. It depicts a tall and slender woman dressed in black, holding a black dog on a leash.

27. A place antelope lope : VELDT
Also known as Veld, Veldt is the name given to large rural spaces in southern Africa. We might use the term “boondocks” for the same thing. The word comes from the German for “field”.

30. Maugham’s title girl of Lambeth : LIZA
“Liza of Lambeth” was the first novel from the pen of English writer W. Somerset Maugham. It’s the story of 18-year old factory work Liza Kemp from the Lambeth district of London, following her for the last four months of her tragic life. It’s a sad tale of brutality towards towards women. At the time of writing, Maugham was working as a doctor at a hospital in Lambeth, which back then was very much a working class area.

W. Somerset Maugham was a playwright and novelist from the UK. Maugham was actually born in France, but on British soil in the British embassy in Paris. He became very successful as an author and was the highest paid writer of the 1930s.

34. Uses without sharing, in slang : BOGARTS
“To bogart” is to bully, or it can mean to use without sharing. In the later sense, a person using marijuana might “bogart a joint”, keeping it to himself or herself and not passing it around. The term is a reference to Hollywood actor Humphrey Bogart, who often played scenes with a cigarette dangling from his lips.

38. Golfer nicknamed Long John : DALY
John Daly is a golfer with the nickname “Long John”, as he really knows how to get distance off the tee. He has the reputation of a wild man on the circuit, and perhaps that’s why he has a drink named after him. A “John Daly” is the same as the non-alcoholic “Arnold Palmer”, with lemonade and iced tea, but the “Daly” has vodka added.

39. Interruption of service? : NET
That would be in tennis.

40. Model material : BALSA
Balsa is a very fast growing tree that is native to parts of South America. Even though balsa wood is very soft, it is actually classified as a hardwood, the softest of all the hardwoods (go figure!). Balsa is light and strong, so is commonly used in making model airplanes. Amazingly, in WWII a full-size British plane, the de Havilland Mosquito, was built largely from balsa and plywood. No wonder they called it “The Wooden Wonder” and “The Timber Terror”.

41. Translation material : RNA
Ribonucleic Acid (RNA) is an essential catalyst in the manufacture of proteins in the body. The genetic code in DNA determines the sequence of amino acids that make up each protein. That sequence is read in DNA by messenger RNA, and amino acids are delivered for protein manufacture in the correct sequence by what is called transfer RNA. The amino acids are then formed into proteins by ribosomal RNA.

42. Website used by a lot of artisans : ETSY
Etsy.com is an e-commerce website where you can buy and sell the kind of items that you might find at a craft fair.

47. They’re “made by fools like me,” per Kilmer : POEMS
The American journalist and poet Joyce Kilmer is primarily known for his 1913 poem titled “Trees”. The original text of the poem is:

53. Start, in a way : BOOT UP
The verb “to boot” as used in the world of computers comes from the phrase “pull oneself up by one’s bootstraps”. The idea is that the software that has to be loaded before a computer can do anything useful is called a “bootstrap load”.

Down
2. Oscar winner before “Grand Hotel” : CIMARRON
“Cimarron” is a 1929 novel by Edna Ferber, adapted into a film of the same name two years later. The novel is all about the Oklahoma Land Rush. Unsettled land back then was known as Cimarron Territory, a familiar name used by settlers, giving the title to the novel.

3. 1974 National Book Award winner by Thomas Pynchon : GRAVITY’S RAINBOW
“Gravity’s Rainbow” is a complex novel by Thomas Pynchon that centers on the design and use of V-2 rockets by Germany towards the end of WWII.

4. Daughter and half sister of Oedipus : ISMENE
According to Greek mythology, Ismene is a daughter, and at the same time half-sister, of Oedipus, King of Thebes. Jocasta was the mother of Oedipus, and then his wife, with the incestuous union resulting in the birth of Ismene.

7. One who goes on to try to conquer the Universe? : MISS USA
The Miss USA beauty pageant was founded in 1952 in order to select the American candidate for the Miss Universe competition.

8. Language akin to Yupik : INUIT
The Inuit peoples live in the Arctic, in parts of the US, Russia, Greenland and Canada.

The Yupik are a group of indigenous peoples of Alaska and the Russian Far East.

13. Four-time N.B.A. scoring champion in the 2010s : DURANT
Kevin Durant is a professional basketball player with the Oklahoma City Thunder of the NBA. You might come across Durant on the big screen as well, as he starred in the children’s film “Thunderstruck” in 2012.

14. Vessel opener : STENT
In the world of medicine and surgery, a stent is an artificial tube inserted inside a vessel in the body, say an artery, so that it reduces the effects of a local restriction in the body’s conduit.

27. Front-and-center section : VIOLAS
The viola looks like and is played like a violin, but is slightly larger. It is referred to as the middle voice in the violin family, between the violin and the cello.

30. It has a Marxist-Leninist ideology : LAOS
The official name for the country of Laos is the Lao People’s Democratic Republic. In the Lao language, the country’s name is “Meuang Lao”. The French ruled Laos as part of French Indochina, having united three separate Lao kingdoms. As there was a plural of “Lao” entities united into one, the French added the “S” and so today we tend to use “Laos” instead of “Lao”.

34. Bêtes noires : BANES
“Bête noire” translates from French as “black beast” and is used in English to describe something or someone that is disliked.

40. Gewgaw : BAUBLE
A “gewgaw” is a trinket, a trivial piece of jewelry. It’s also a term I’ve never seen outside of crosswords

44. Davis of film : GEENA
As well as being a successful Hollywood actress, Geena Davis is an accomplished archer and came close to qualifying for the US archery team for the 2000 Summer Olympics. Davis is also a member of American Mensa. She is quite the lady …

52. K’ung Fu-___ : TSE
The sayings of the Chinese philosopher Confucius (anglicized from “K’ung Fu-Tse”) are collected in a work called “The Analects” or “Linyu”. It wasn’t Confucius who wrote down his thoughts though, but rather his pupils, some 40 or so years after his death in 479 BC.