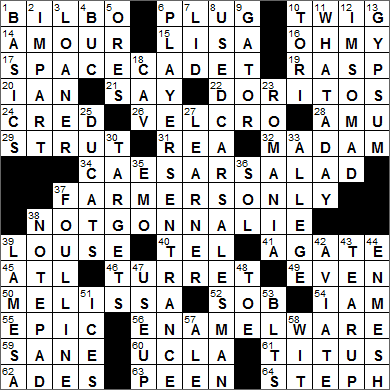 Today’s Wiki-est, Amazonian Googlies
Across
1. First name in fantasy fiction : BILBO
In J. R. R. Tolkien’s fantasy novel “The Hobbit”, the title character is Bilbo Baggins, a hobbit who stumbles across a magical ring and then embarks on a series of adventures.

6. Payola payoff : PLUG
“Payola” is the illegal practice of paying radio stations or disk jockeys to repeatedly play a particular piece of music. The impetus behind the crime is that the more often a song is played, the more likely it is to sell. The term “payola” comes from the words “pay” and “Victrola”, an RCA brand name for an early phonograph.

15. When repeated, singer of the 1987 #1 hit “Head to Toe” : LISA
Lisa Lisa and Cult Jam was a band that was active in the late eighties and early nineties. Lisa Lisa is the stage name of musician Lisa Velez.

17. One in la-la land : SPACE CADET
The expression “space cadet” is used to describe someone who is eccentric and disconnected with reality. It may even imply that the person is a user of hallucinogens. The phrase has been around since the sixties, and may be derived from the science fiction TV show “Tom Corbett, Space Cadet” which aired in the fifties.

La-la land is a euphemism for a state of unconsciousness.

19. Clichéd gift for a prisoner : RASP
“Cliché” is a word that comes from the world of printing. In the days when type was added as individual letters into a printing plate, for efficiency some oft-used phrases and words were created as one single slug of metal. The word “cliché” was used for such a grouping of letters. It’s easy to see how the same word would become a term to describe any overused phrase. Supposedly, “cliché” comes from French, from the verb “clicher” meaning “to click”. The idea is that when a matrix of letters was dropped in molten metal to make a cliché, it made a clicking sound.

22. Snack brand first produced at Disneyland in the 1960s : DORITOS
The product that was to become Doritos was a creation at the Casa de Fritos in Disneyland in the early sixties. A marketing executive from Frito-Lay noticed how well the snack was selling in the park, and made a deal to produce the chips under the name “Doritos”, starting in 1964. “Doritos” translates from Spanish as “little bits of gold”.

26. Alternative to a snap : VELCRO
The hook-and-loop fastener that we now call Velcro was invented in 1941 by Georges de Mestral, a Swiss engineer. Mestral noticed that the seeds of the burdock plant (burrs or burs) stuck to his clothes. Under the microscope he found hooks on the burrs that grabbed hold of loops in his clothing. After years of development, he came up with a way of simulating the natural hook using man-made materials, and Velcro was born.

28. Asia’s ___ Darya River : AMU
The Amu Darya is a major river in Central Asia that empties into the Aral Sea. It is also called the Oxus or Amu River.

31. Stephen who was nominated for a 1992 Best Actor Oscar : REA
Stephen Rea is an Irish actor from Belfast. Rea’s most successful role was Fergus in 1992’s “The Crying Game”, for which performance he was nominated for the Best Actor Oscar. In “The Crying Game”, Fergus was a member of the IRA. In real life, Rea was married to IRA bomber and hunger striker Dolours Price at the time he made the movie.

34. Dish that often includes anchovies : CAESAR SALAD
The Caesar Salad was created by restaurateur Caesar Cardini at the Hotel Caesar’s in Tijuana, Mexico. The original recipe called for whole lettuce leaves that were to be lifted up by the stem and eaten with the fingers.

Anchovies are saltwater fish that are quite small, although their adult size can vary from under an inch to over 15 inches depending on the species. Vegans should beware, as they are a ingredient in several common foods including Worcestershire sauce and Caesar salad dressing.

41. 5 1/2-point type : AGATE
In the world of typography, “agate” is a unit of measure. One agate is is equal to 5.5 points, or about one quarter of an inch. Agate is generally the smallest type size used in newspapers, and is generally restricted to advertisements and market reports in financial publications.

45. Falcons, on scoreboards : ATL
The Atlanta Falcons joined the NFL in 1965. The team name was suggest by a schoolteacher called Miss Julia Elliott. Elliot suggested that “the Falcon is proud and dignified, with great courage and fight. It never drops its prey. It is deadly and has a great sporting tradition.”

46. Staple of Victorian architecture : TURRET
A “turret” is a small tower, and a word coming to us from Latin via French. The French word is “tourette” meaning small “tour”, small “tower”.

50. McCarthy in Hollywood : MELISSA
Melissa McCarthy is an actress and comedian who is perhaps best known on the small screen for playing Molly on the sitcom “Mike & Molly”, and on the big screen for playing the wild and wacky Megan Price in the 2011 comedy “Bridesmaids”. According to “Forbes”, McCarthy is the third-highest paid actress in 2014/2015, after Jennifer Lawrence and Scarlett Johansson.

60. Where Arthur Ashe played college tennis : UCLA
Arthur Ashe was a professional tennis player from Richmond, Virginia. In his youth, Ashe found himself having to travel great distances to play against Caucasian opponents due to the segregation that still existed in his home state. He was rewarded for his dedication by being selected for the 1963 US Davis Cup team, the first African American player to be so honored. Ashe continued to run into trouble because of his ethnicity though, and in 1968 was denied entry into South Africa to play in the South African Open. In 1979 Ashe suffered a heart attack and had bypass surgery, with follow-up surgery four years later during which he contracted HIV from blood transfusions. Ashe passed away in 1993 due to complications from AIDS. Shortly afterwards, Ashe was posthumously awarded the Presidential Medal of Freedom by President Bill Clinton.

61. Book before Philemon : TITUS
The “Epistle of Paul to Titus” is one the Book of the New Testament in the Christian Bible. Saint Titus was a companion of Saint Paul, and is known today as the patron saint of the US Army Chaplain Corps.

63. Round end, of a sort : PEEN
The peen of a hammer is on the head, and is the side of the head that is opposite the striking surface. Often the peen is in the shape of a hemisphere (as in a ball-peen hammer), but usually it is shaped like a claw (mainly for removing nails).

64. Curry of the N.B.A. : STEPH
Steph Curry is a professional basketball player who was named the league’s MVP in 2015, the same season that he led the Golden State Warriors to their first NBA championship since 1975. Steph’s father is former NBA player Dell Curry, and the older brother of current NBA player Seth Curry.

Down
3. One day’s drive, maybe : LOANER
A loaner car is often available at a dealership when one’s car is in for repair for a day or two.

4. N.F.C. South pro : BUC
The Tampa Bay Buccaneers joined the NFL in 1976 along with the Seattle Seahawks as expansion teams. The Bucs had a tough start in the NFL, losing their first 26 games. Things went better in the early eighties, but then the team went through 14 consecutive losing seasons. Their luck changed again though, and they won the Super Bowl at the end of the 2002 season.

9. Bulldog rival : GATOR
The Florida Gators are the sports teams of the University of Florida, located in Gainesville. Sometimes the female teams are called the “Lady Gators”, and all of the fans make up the “Gator Nation”.

10. Spelling with lines : TORI
Tori Spelling is an American actress who made a name for herself playing Donna Martin on television’s “Beverly Hills, 90210”. Tori is the daughter of film and television producer Aaron Spelling.

13. Plaster of paris, essentially : GYPSUM
Plaster made using gypsum is commonly referred to as plaster of Paris. The original plaster of Paris came from a large deposit of gypsum mined at Montmartre in Paris, hence the name.

18. King James, e.g. : CAV
Basketball player LeBron James (nicknamed “King James”) seems to be in demand for the covers of magazines. James became the first African American man to adorn the front cover of “Vogue” in March 2008. That made him only the third male to make the “Vogue” cover, following Richard Gere and George Clooney.

The Cleveland Cavaliers are the professional basketball team based in Cleveland, Ohio. The Cavs joined the NBA as an expansion team in 1970.

23. Country that’s home to Dracula’s Castle : ROMANIA
“Dracula” is a novel written by the Irish author Bram Stoker and first published in 1897. Dracula wasn’t the first vampire of literature, but he certainly was the one who spawned the popularity of vampires in theater, film and television, and indeed more novels. Personally, I can’t stand vampire fiction …

Transylvania is a geographic region in the center of Romania. The area is very much associated with vampires ever since the publication of Bram Stoker’s novel “Dracula” that is set in Transylvania.

25. Tickets, in slang : DUCATS
“Ducat” is a slang term for an item of money or for an admission ticket. The original ducat was a coin introduced by the Republic of Venice in 1284. Famously, at the climax of William Shakespeare’s “The Merchant of Venice”, Antonio goes on trial because he cannot repay a loan to Shylock of 3,000 ducats. Faced with non-payment, Shylock demands his legal right to “a pound of flesh”.

35. Angst-ridden and moody : EMO
The musical genre of “emo” originated in Washington D.C. in the 80s, and takes its name from “emotional hardcore”. “Emo” is also the name given to the associated subculture. Not my cup of tea …

39. San Diego suburb known as the “Jewel of the Hills” : LA MESA
One of the most famous residents of La Mesa, a suburb of San Diego, California, was the actor Dennis Hopper.

53. Counter orders? : BLTS
The BLT (bacon, lettuce and tomato) is the second most popular sandwich in the US, after the plain old ham sandwich.