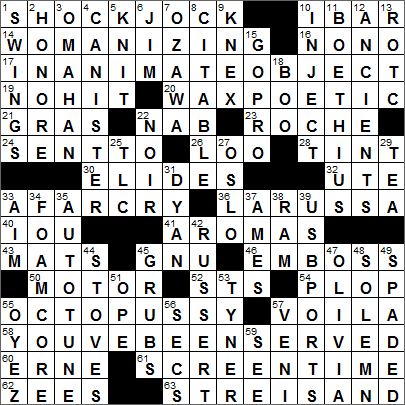 Today’s Wiki-est, Amazonian Googlies
Across
14. Lothario’s activity : WOMANIZING
There is a character Lothario in Don Quixote, and in the “Fair Penitent”, a 1703 play by Nicholas Rowe. In both cases the Lothario in question exhibits less than wholesome behavior towards a woman, giving rise to the term “lothario” meaning a “roue”.

23. Company that makes Tamiflu : ROCHE
The giant pharmaceutical and medical diagnostics company Hoffmann-La Roche is based in Basel, Switzerland. The company was founded back in 1896 by Fritz Hoffmann-La Roche, and initially produced vitamins.

26. Head of Hogwarts : LOO
It has been suggested that the British term “loo” comes from Waterloo (water-closet … water-loo), but no one seems to know for sure. Another suggestion is that the term comes from the card game of “lanterloo” in which the pot was called the loo!

30. Says “Top o’ the morning,” say : ELIDES
“To elide” is to pass over, omit or slur a syllable when speaking.

36. Manager honored at Cooperstown in 2013 : LA RUSSA
Tony La Russa is a former MLB player and manager. Off the field, La Russa is well known in this part of Northern California as the founder of the Animal Rescue Foundation (ARF) headquartered in the city of Walnut Creek. The ARF is a “no-kill” animal shelter for abandoned dogs and cats. We rescued our pet dog from the ARF.

43. Pilates class sights : MATS
Pilates is a physical exercise system developed by, and named for, Joseph Pilates. Pilates introduced his system of exercises in 1883 in Germany.

45. Southern African game : GNU
A gnu is also known as a wildebeest, and is an antelope native to Africa. “Wildebeest” is actually the Dutch word for “wild beast”.

55. Bond femme fatale : OCTOPUSSY
The title for the 13th James Bond film “Octopussy” actually came from an original story by the creator of James Bond, Ian Fleming. However, the movie bears no resemblance to Fleming’s 1966 short story “Octopussy and the Living Daylights”. “Octopussy” was one of the Roger Moore Bond movies, his second to last.

Maud Adams played two Bond girls, in “The Man with the Golden Gun” and “Octopussy”, both times opposite Roger Moore as James Bond. Also, Adams was visiting her friend Roger Moore while he was shooting “A View to a Kill” and can be seen in the background in in one scene. So actually, Adams was in three Bond movies.

60. Cousin of a kite : ERNE
The ern (sometimes “erne”) is also called the white-tailed eagle, or the sea-eagle.

63. Broadway star who was on Nixon’s list of enemies : STREISAND
During the Senate Watergate hearings, it came to light that a list had been compiled by the White House of President Nixon’s major political opponents. The list was put together as part of a campaign referred to officially as the “Political Enemies Project”. That list comprised twenty names, including actor Paul Newman and journalist Daniel Schorr. The list was expanded into a master list of Nixon’s political opponents, a list that contained hundreds of names. That master list included the likes of Senator Ted Kennedy, Governor George Wallace and celebrities Bill Cosby, Jane Fonda, Joe Namath and Barbra Streisand.

3. Certain Cornhusker : OMAHAN
Omaha is the largest city in the state of Nebraska. It is located on the Missouri River, about 10 miles north of the mouth of the Platte River When Nebraska was still a territory Omaha was its capital, but when Nebraska achieved statehood the capital was moved to the city of Lincoln.

The state of Nebraska got its “Cornhusker State” nickname from the University of Nebraska athletic teams (and not the other way round). In turn, the university teams’ name comes from the prevalence of corn as a crop, and the harvesting process known as “cornhusking”, removal of the outer husk from the ear of corn.

7. Conductor who has a hall at Tanglewood named after him : OZAWA
Tanglewood is an estate in Lenox, Massachusetts. Tanglewood is the summer home of the Boston Symphony Orchestra. The estate takes its name from “Tanglewood Tales” written by Nathaniel Hawthorne. The author wrote the book in 1853 while staying in a cottage in the area. The owner renamed the cottage after Hawthorne’s work, and the name was then adopted for the nearby estate.

9. Lego competitor : K’NEX
The construction toy with the name K’Nex is the phonetic spelling of the word “connects”. The toy was invented by Joel Glickman, who came up with the idea while playing with straws as he sat at a table after a wedding. He launched K’Nex in 1993, and it is still sold in stores.

12. Aeschylus, Sophocles and Aristophanes : ANCIENTS
Aeschylus was one of three ancient Greek tragedians whose work has survived. The first of these was Aeschylus, the second Sophocles, and the third Euripides. Aeschylus is sometimes referred to as the father of tragedy, as his work is the earliest known representation of the style.

13. College recruitment org. : ROTC
The Reserve Officers’ Training Corps (ROTC) is a training program for officers based in colleges all around the US. The ROTC program was established in 1862 when as a condition of receiving a land-grant to create colleges, the federal government required that military tactics be part of a new school’s curriculum.

15. Camera manufacturer whose slogan is “Be a Hero” : GOPRO
GoPro is a company that makes high-definition video cameras that have a rugged design. Famously, GoPro cameras are used in extreme conditions. For example, they are often mounted on moving vehicles or used by people playing sports. Recently, two astronauts on the International Space Station inserted a GoPro camera inside a floating ball of water, and then showed the view from inside the ball of water. Amazing footage …

22. Genre that “The Long Goodbye” is based on : NOIR
The expression “film noir” has French origins, but only in that it was coined by a French critic in describing a style of Hollywood film. The term, meaning “black film” in French, was first used by Nino Frank in 1946. Film noir often applies to a movie with a melodramatic plot and a private eye or detective at its center. Good examples would be “The Big Sleep” and “D.O.A”.

“The Long Goodbye” is a 1973 Robert Altman film based on the 1953 novel of the same name by Raymond Chandler. The movie stars Elliott Gould as Chandler’s famous private eye Phillip Marlowe.

27. World capital with 40 islands within its city limits : OSLO
The Norwegian capital of Oslo is located at the northern end of a fjord known as Oslofjord. The fjord is home to 40 islands that lie within the city’s limits. Oslo also has 343 lakes.

29. Breakfast spot? : TEA
I guess the reference here is to the oft quoted English phrase “a spot of tea”. Mind you, I’ve only ever heard that said in jest …

31. Cannon shot in Hollywood : DYAN
The actress Dyan Cannon is perhaps best known for playing Alice in the 1969 film “Bob & Carol & Ted & Alice”, for which she received a Best Actress Oscar nomination. Cannon is also famous for having been on Cary Grant’s long list of wives, from 1965 to 1968 (and he was 33 years her senior).

35. Get perfectly pitched, in a way : AUTO-TUNE
When Cher recorded the 1998 song “Believe”, the audio engineers routinely corrected the sound of Cher’s voice to ensure that all notes were sung with perfect pitch (all singers “cheat”, it seems!). The software that does this pitch correction is called “Auto-Tune”. Then, for a bit of fun, the same engineers played with the Auto-Tune software and created a special effect in her voice that she so liked it was left in the final release. You can easily detect the strange effect if you listen to the song. The process is now called the “Cher Effect” and is used by other artists in their recordings.

37. Midwest college town : AMES
The Iowa city of Ames was founded as a stop on the Cedar Rapids and Missouri Railroad in 1864. It was named for US Congressman Oakes Ames from the state of Massachusetts in honor of the role that Ames played in the building of the transcontinental railroad.

39. Openings in the computer field? : USB PORTS
Universal Serial Bus (USB) is an industry standard dealing with how computers and electronic devices connect and communicate, and deal with electrical power through those connections.

42. Longtime “Meet the Press” moderator : RUSSERT
Tim Russert was a TV journalist who moderated NBC’s “Meet the Press” for over sixteen years. Some say that Russert coined the phrases “red state” and “blue state”. Russert denied that, but he certainly did popularize the usage.

44. Places for pilots : STOVES
A pilot light is a small gas flame, one using a relatively small amount of fuel, that remains lit as an ignition source for larger gas burners.

47. Cesario’s lover in literature : OLIVIA
William Shakespeare wrote his comedy “Twelfth Night” as a Christmas entertainment (Twelfth Night being the end of the Christmas season). The play’s protagonist is a young woman named Viola. The plot calls for Viola to dress as eunuch named Cesario who goes into the service of Duke Orsino. Orsino has Cesario go to Duchess Olivia to express his love for her. But Olivia falls for Cesario, Cesario (Viola) falls for Orsino, and hilarity ensues …

And, ere my knee rise from the earth’s cold face,
I throw my hands, mine eyes, my heart to thee,
Thou setter up and plucker down of kings,
Beseeching thee, if with they will it stands
That to my foes this body must be prey,
Yet that thy brazen gates of heaven may ope,
And give sweet passage to my sinful soul!

55. Hearing command : OYEZ!
Town criers make public announcements on the streets, usually shouting “Oyez! Oyez! Oyez!” to attract attention. The term “oyez” derives from the Anglo-Norman word for “listen” and is used in this instance to me “Hear ye!”

57. Start of a classic boast : VENI …
The oft-quoted statement “Veni, vidi, vici” (“I came, I saw, I conquered”) is believed by many to have been written by Julius Caesar. The words date back to 47 BC and refer to the short war between Rome and Pharnaces II of Pontus.