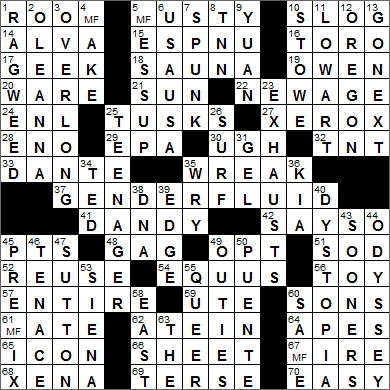 CROSSWORD SETTER: Ben Tausig
THEME: Gender Fluid
There are four squares in today’s grid that are GENDER FLUID. Either of the letters M and F (as in “male” and “female”) give answers that suit the clues.

37A. Having a variable identity, as suggested by four squares in this puzzle : GENDER FLUID

1A. Part of a house : ROOF or ROOM
5A. Old-seeming : FUSTY or MUSTY
61A. Topic to ask a fortuneteller about : FATE or MATE
67A. Tough stuff to walk through : FIRE or MIRE
4D. Fabricate : MAKE or FAKE
5D. Reveal a secret, say : MESS UP or FESS UP
45D. It’s combined at the beginning : PREMIX or PREFIX
60D. Word that can precede sex : SAME or SAFE

Today’s Wiki-est, Amazonian Googlies
Across
5. Old-seeming : FUSTY or MUSTY
Our word “fusty” means “musty, stale-smelling”. The term comes into English from French via the word “fusté” meaning “tasting of the cask”, which in turn comes from the Old French “fuist”, the word for a wine cask. The definition has been extended to describe something that is stale, out-of-date, stubbornly old-fashioned.

14. Middle name of the inventor of the electrographic vote recorder : ALVA
Thomas Alva Edison (TAE) was nicknamed “The Wizard of Menlo Park” by a newspaper reporter, a name that stuck. He was indeed a wizard, in the sense that he was such a prolific inventor. The Menlo Park part of the moniker recognizes the location of his first research lab, in Menlo Park, New Jersey.

17. Tech expert, as it were : GEEK
The original “geek” was a sideshow performer, perhaps at a circus. We use the term today for someone regarded as foolish or clumsy, but also for someone who is technically driven and expert, but socially inept.

18. Steamy place : SAUNA
As my Finnish-American wife will tell you, “sauna” is a Finnish word, and is correctly pronounced “sow-nah” (with “sow” as in the female pig).

20. Ending with metal or mal- : -WARE
“Malware” is a collective term for software and program code that is created to intentionally disrupt and exploit computer systems. Viruses, worms, trojan horses and spyware are all covered by the term. “Malware” is short for “malicious software”.

22. Holistic spiritual movement : NEW AGE
New-Age music is created to provide a relaxing and stress-free atmosphere. The New Age movement is often said to have begun with the release of an album called “Spectrum Suite” by Steven Halpern in 1975.

25. Narwhal features : TUSKS
The narwhal is a whale species in which the male has a large tusk. The “tusk” is actually canine tooth that projects from the jaw through the lip. Usually only one tusk develops, on the left side of the jaw. Occasionally, a second tusk develops as well, on the right side of the jaw. The tusk is unlike a tooth in that it contains many nerves, making it a sensory organ. It is rarely used in an act of aggression.

27. Run off, in a way : XEROX
Xerox was founded in 1906 in Rochester, New York and originally made photographic paper and equipment. Real success came for the company in 1959 when it introduced the first plain-paper photocopier. Xerox named Ursula Burns as CEO in 2009, the first African American woman to head up a S&P 100 company. Burn was also the first woman to succeed another female CEO (replacing Anne Mulcahy).

28. Music producer Brian : ENO
Brian Eno is a musician, composer and record producer from England who first achieved fame as the synthesiser player with Roxy Music. As a producer, Eno has worked with David Bowie, Devo and U2.

29. Inits. on a car sticker : EPA
The Environmental Protection Agency (EPA) was set up during the Nixon administration and began operation at the end of 1970.

32. AC/DC single with the lyric “watch me explode” : TNT
The Heavy Metal band known as AC/DC was formed by two brothers Malcolm and Angus Young in Australia. The group is usually called “Acca Dacca” down under.

33. Poet who wrote of Beatrice : DANTE
“La Vita Nuova” is a text by Italian poet Dante Alighieri comprising both prose and verse. It recounts the author’s love for Beatrice, describing in 42 chapters the history of that love from the first time he saw her when they were children, right up his mourning after her death. “La Vita Nuova” translates into English from Italian as “The New Life”.

35. Unleash, as havoc : WREAK
“Havoc” is a great damage or destruction. The term comes from the Anglo-French phrase “crier havok”, which was an order given in the late 1500s to soldiers, instructing them to seize plunder.

54. Hyundai model with a lot of horsepower? : EQUUS
The Hyundai Equus is the largest and most expensive sedan made by the Korean manufacturer. The Equus is often used by limousine services.

59. Pac-12 athlete : UTE
The Utah Utes are the athletic teams of the University of Utah.

62. Dined watching Netflix, say : ATE IN
Netflix was founded in Los Gatos, California in 1997 as a DVD rental company that sent out titles by mail. Netflix no longer focuses on distribution by mail, and instead provides programming on demand. The company is also making a big name for itself producing films and TV programs.

65. Cher or Dolly Parton, e.g. : ICON
Cher’s real name is Cherilyn Sarkisian, born in 1946. In her acting career, Cher was nominated for the Best Supporting Actress Oscar of 1984 for her performance in “Silkwood”. She went further in 1988 and won the Best Actress Oscar for playing Loretta Castorini in “Moonstruck”.

Dolly Parton is a country music singer-songwriter, as well as an actress. Parton has written over 3,000 songs, my favorite of which is “I Will Always Love You”, a hit for herself and for Whitney Houston.

68. Lucy Lawless role : XENA
The Xena character, played by New Zealander Lucy Lawless, was introduced in a made-for-TV movie called “Hercules and the Amazon Women”. Lawless reprised the role in a series called “Hercules: The Legendary Journeys”. Xena became so popular that a series was built around her character, with Lawless retained for the title role. The fictional Xena supposedly came from the “non-fictional” Greek city of Amphipolis.

Down
1. Cause of some allergy flare-ups : RAGWEED
The pollen of ragweed is the greatest allergen of all pollens. It seems that the pollen season has been lengthening in recent years, probably due to global warming.

2. Mamet play inspired by the Anita Hill/Clarence Thomas hearings : OLEANNA
I’ve never seen it, but “Oleanna” sounds like a powerful play to me. Written by David Mamet, it was first performed in 1992. It’s a two-person piece, the tale of a university professor and a female student who accuses him of sexual exploitation. Mimet got many of the themes of the play from the Clarence Thomas confirmation hearings in which Anita Hill accused the future Supreme Court justice of sexual harassment.

5. Reveal a secret, say : MESS UP or FESS UP
The term “fess” is most often seen as part of the phrasal verb “to fess up” meaning “to admit to something”. “Fess” is simply a shortened form of “confess”.

7. Mettle : SPUNK
We’ve been using the word “spunk” to mean “pluck, courage” since the late 1700s. Prior to that it was a Scottish word meaning “spark”, a word that we absorbed into English.

“Mettle” is such a lovely word. It means courage and fortitude, or spirit. “Mettle” is simply a variant spelling of the word “metal”.

8. Old channel with country music videos : TNN
The Nashville Network (TNN) was a country music cable channel that operated from 1983 to 2003. When TNN closed down it was relaunched with a completely different format as Spike, marketed as “the first television channel for men”.

9. Chinese money : YUAN
The Korean Won, the Chinese Yuan, and the Japanese Yen (all of which are Asian currencies) take their names from the Chinese written character that represents “round shape”.

10. Best-selling author who was a neighbor of Twain in Hartford : STOWE
Harriet Beecher Stowe’s most famous and most successful work is “Uncle Tom’s Cabin”. It was also her first novel. Her second was published in 1856:”Dred: A Tale of the Great Dismal Swamp”.

12. Snake’s place, partly : OREGON
The Snake River in the US northwest is the largest tributary of the Columbia River.

34. 2012 comedy with a talking bear : TED
“Ted” is a movie written, directed, produced and starring Seth MacFarlane. In the story, MacFarlane voices a teddy bear who is the best friend of a character played by Mark Wahlberg.

36. Soul producer : KIA
The Kia Soul is a compact car produced in South Korea, although it was designed by Kia here in the US, in Irvine, California. Yep, the Kia Soul is made in Seoul …

38. Forensic material : DNA
Something described as “forensic” is connected with a court of law, or with public discussion or debate. The the term comes from the Latin “forensis” meaning “of a forum, of a place of assembly”. We mainly use the word today to mean “pertaining to legal trials” as in “forensic medicine” and “forensic science”.

40. “The Hunger Games” universe, e.g. : DYSTOPIA
A dystopia is an imaginary community in which the residents live unhappily and in fear. “Dystopia” is the opposite of “utopia”. One example of such a society is that described by George Orwell in “Nineteen Eighty-Four”. A more contemporary example would be the setting for the novels “The Hunger Games”.

“The Hunger Games” is a 2008 novel by Suzanne Collins, the first in a trilogy of titles that also includes “Catching Fire” (2009) and “Mockingjay” (2010). “The Hunger Games” was adapted into a very successful movie released in 2012, with the sequels following soon after. Amazon.com reports more sales of “The Hunger Games” series books than even the “Harry Potter” series.

43. Neighbors of Longhorns : SOONERS
They would be the Texas Longhorns and Oklahoma Sooners.

46. Certain pair in bridge : TENACE
In the wonderful card game of bridge, a tenace is a broken sequence of honor cards, like AQ or KJ.

47. Bank robber Willie who co-wrote “Where the Money Was” : SUTTON
Willie Sutton was a bank robber from Brooklyn, New York. He was very accomplished at his trade, stealing about $2 million dollars over a 40-year career that lasted until the early 1950s. Sutton never killed anyone, but spent over half of his adult life in jail. His (co-written) autobiography “Where the Money Was” was published in 1976, four years before Sutton died, at the age of 79.

50. Nuyorican music legend Tito : PUENTE
After serving in the navy in WWII for three years, the musician Tito Puente studied at Juilliard, where he got a great grounding in conducting, orchestration and theory. Puente parlayed this education into a career in Latin Jazz and Mambo. He was known as “El Rey” as well as “The King of Latin Music”.

The word “Nuyorican” refers to the Puerto Rican diaspora and their descendants living in and around New York City. The term is a portmanteau of “New York” and “Puerto Rican”.