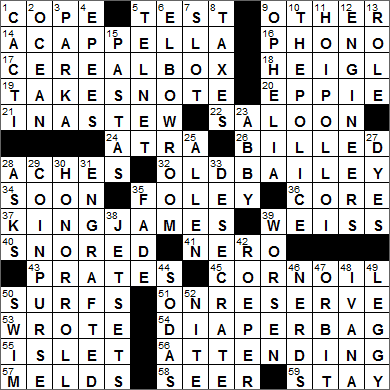 Today’s Wiki-est, Amazonian Googlies
Across
14. With nobody playing, say : A CAPPELLA
“A cappella” music is sung without instruments accompanying. The name translates from Italian as “in the manner of the chapel”.

16. Retro stereo component : PHONO
“Phonograph” was an early name for what became known as a gramophone and later a record player. Famously, the phonograph was invented in 1877 by Thomas Edison.

18. Katherine of NBC’s “State of Affairs” : HEIGL
Katherine Heigl is best associated with the television show “Grey’s Anatomy” on which she played Dr. Izzie Stevens. That’s not a show I ever watched, but I did enjoy the espionage show “State of Affairs” in which Heigl played the lead. I guess I was in the minority though, as NBC cancelled “State of Affairs” after only one season …

20. Girl adopted by Silas Marner : EPPIE
“Silas Marner: The Weaver of Raveloe” is a novel written by George Eliot and first published in 1861. There’s an excellent BBC TV version of the tale (shown on PBS) starring Ben Kingsley in the title role, with Patsy Kensit playing Eppie, the young orphaned child that Marner takes under his wing.

22. Anti-___ League (Progressive Era organization) : SALOON
The Anti-Saloon League was the most powerful prohibition lobby in the US by the time Congress passed the 18th Amendment to the Constitution in 1920. The organization is still around today, going by the name American Council on Alcohol Problems.

The Progressive movement had the goal of eliminating corruption in government in the US. The movement gave its name to the Progressive Era that lasted from the 1890s to the 1920s. Journalists who investigated and exposed corruption were given the name “muckrakers”. The term “muckraker” was popularized by President Theodore Roosevelt when he referred to “the Man with the Muck-rake”, a character in John Bunyan’s allegory “The Pilgrim’s Progress”.

24. Blade brand : ATRA
Fortunately for crossword constructors, the Atra razor was introduced by Gillette in 1977. The Atra was sold as the Contour in some markets and its derivative products are still around today.

32. Site of Oscar Wilde’s trials : OLD BAILEY
The Central Criminal Court in London is usual referred to as “the Old Bailey”, a reference to the name of the street on which the court is located.

When Oscar Wilde was at the height of his success, he had the Marquess of Queensberry prosecuted for libel. Wilde claimed that Queensberry had left a note at his club with a note that accused the former of sodomy. Queensberry was exonerated during the trial, and Wilde dropped the charges. But the damage was done. Evidence revealed during the trial led to Wilde’s immediate arrest on charges of sodomy. He was convicted and served two years in jail.

37. Eponym of Bible history : KING JAMES
In 1604, King James I of England convened a conference at Hampton Court in order produce a new translation of the Bible, as the Puritan sect within the church had problems with prior versions. 47 scholars made new translations for the New Testament from Greek and from the Old Testament from Hebrew. The result is the King James Authorized Version.

39. Ehrich ___ a.k.a. Harry Houdini : WEISS
Harry Houdini was the stage name of Hungarian-born escapologist and magician Erik Weisz (later changed to “Harry Weiss”). Many people are under the impression that Houdini died while performing an escape that went wrong, an impression created by the storyline in a couple of movies about his life. The truth is that he died of peritonitis from a burst appendix. It is also true that a few days prior to his death Houdini took a series of punches to his stomach as part of his act, but doctors believe that his appendix would have burst regardless.

41. “I, Claudius” figure : NERO
“I, Claudius” is a 1934 novel penned by Robert Graves, written in the form of an autobiography of Emperor Claudius of Rome. Graves wrote a sequel in 1935 called “Claudius the God”. Both books were adapted by the BBC into a fabulous television series that went by the name of the first book “I, Claudius”.

54. One with changing needs : DIAPER BAG
“Diaper” is another word that I had to learn when I moved to America. What are called “diapers” over here, we call “nappies” back in Ireland. The term “diaper” is actually the original term that was used in England for the garment, where “diaper” referred to the cloth that was used. The term diaper was brought to the New World where it stuck. Back in Britain, diaper was displaced by the word “nappy”, a diminutive of “napkin”.

Down
2. School zone? : OCEAN
The ocean is where we find many schools of fish.

3. Top of the winter : PARKA
A parka is a hooded, often fur jacket that is worn in cold weather. The original parka was a pullover design, but nowadays it is usually zipped at the front. “Parka” is the Russian name for the garment , absorbed into English in the late 1700s via the Aleut language.

4. Swords, in Sèvres : EPEES
The French word for sword is “épée”. In competitive fencing the épée is connected to a system that records an electrical signal when legal contact is made on an opponent’s body.

Sèvres is suburb of Paris, located at the southwest of the city. One of Sèvres’ claims to fame is that it is home to International Bureau of Weights and Measures. It is the BIPM (“Bureau international des poids et mesures”) that ensures that a meter is meter, and a gram is a gram.

5. PC-linking program : TELNET
Telnet is a network protocol i.e. a defined format for controlling communications between devices in a network.

8. Proverbial certainty : TAXES
In a letter to Jean-Baptiste Leroy dated 13 Nov 1789, Benjamin Franklin wrote “Our new Constitution is now established, and has an appearance that promises permanency; but in this world nothing can be said to be certain, except death and taxes.”

9. Shakespeare character who coins the term “primrose path” : OPHELIA
In William Shakespeare’s “Hamlet”, Ophelia is courted by Hamlet, the man himself. Ophelia is the daughter of nobleman Polonius. She dies …

11. The ordinary folk : HOI POLLOI
“Hoi polloi” is a Greek term, literally meaning “the majority, the many”. In English, “hoi polloi” has come to mean “the masses” and is often used in a derogatory sense.

12. “Scientists dream about doing great things. ___ do them”: James A. Michener : ENGINEERS
Author James A. Michener won his Pulitzer in 1948 for his collection of short stories set during WWII called “Tales of the South Pacific”. The stories are based on Michener’s own experiences and on tales that he learned while stationed there during the war. The book was published in 1946, and three years later the musical “South Pacific” opened with a storyline drawn from Michener’s book.

15. Gigli and pici, for two : PASTAS
Campanelle pasta is in the shape of bell-like flowers. The Italian “campanelle” means “little bells”. Campanelle is also known a “gigli” or “riccioli”.

Pici is pasta that resembles a thick spaghetti. Pici is usually hand-rolled.

23. “Dear ___” (1960s-’70s radio program) : ABBY
The advice column “Dear Abby” first appeared in 1956. Pauline Phillips was Abby back then, but now the column is written by Jeanne Phillips, her daughter. The full name of the “Abby” pen name is Abigail Van Buren, which Pauline Phillips came up with by combining “Abigail” from the biblical Book of Samuel, and “Van Buren” after the former US president. “Dear Abby” was also a radio show in the sixties and seventies.

29. Quarters’ quarters? : COIN PURSE
We use the term “quarters” for a place of abode, especially housing for military personnel. Back in the late 16th century, quarters were a portion (quarter) of a town reserved for a military force.

33. Treat with violent disrespect : DESECRATE
“To desecrate” is to treat sacrilegiously. The term more specifically means to divest of sacred character, and is the opposite of the verb “to consecrate”.

42. Chicago Sun-Times columnist Richard : ROEPER
Richard Roeper is columnist and film critic for “The Chicago Sun-Times”, and came to national attentions when he replaced Gene Siskel as co-host with Roger Ebert on the famous film review TV show. Roeper started work with Ebert in 2000, after Siskel died in 1999. Roeper stayed with the show right through 2008, even though Ebert had to bow out in 2006 as he recovered from cancer surgery.

46. Brainy high school clique : NERDS
A “clique” is a small, exclusive group of people. The term comes to us from France, where it has the same meaning. In French it somehow evolved in meaning from the original “clique” meaning a sharp noise, or as we would say today, a “click”.

48. Former Trump Organization member : IVANA
Ivana Winklmayr was born in Czechoslovakia. Winklmayr was an excellent skier, and was named as an alternate for the 1982 Czech Olympic Team. She was promoting the Montreal Olympics in New York in 1976 when she met Donald Trump. Ivana and Donald’s marriage was very public and well-covered by the media, but not nearly so well as their very litigious divorce in the early nineties.

49. Like Ziegfeld girls : LEGGY
Florenz “Flo” Ziegfeld, Jr. was the man behind the series of theatrical revues called the “Ziegfeld Follies”, as well as the producer of the musical “Show Boat”. The “Follies” shows were structured as imitations of the “Folies Bergère” cabaret shows of Paris.