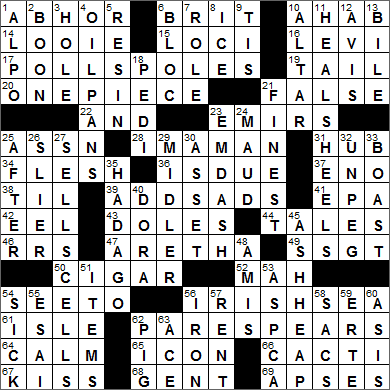 CROSSWORD SETTER: Victor Fleming & Andrea Carla Michaels
THEME: They’re There
All of the themed answers, they’re there in the grid! Each comprises two words, words that are homophones:

Glasgow is the largest city in Scotland and sits on the River Clyde. People from Glasgow are known as Glaswegians. Back in the Victorian Era, Glasgow earned a reputation for excellence in shipbuilding and was known as “Second City of the British Empire”. Glasgow shipyards were the birthplaces of such famous vessels as the Lusitania, the Queen Mary and the Queen Elizabeth.

10. Mariner in a whale of a novel? : AHAB
Captain Ahab is the obsessed and far from friendly captain of the Pequod in Herman Melville’s “Moby-Dick”. The role of Captain Ahab was played by Gregory Peck in the 1956 John Huston film adaptation. Patrick Stewart played Ahab in a 1998 miniseries in which Peck made another appearance, as Father Mapple.

14. Sergeant’s superior, slangily : LOOIE
A “looie” (lieutenant) has a higher rank than a sergeant.

16. ___ Strauss & Co. : LEVI
Levi Strauss was the founder of the first company in the world to manufacture blue jeans. Levi Strauss & Co. opened in 1853 in San Francisco. Strauss and his business partner were awarded a patent in 1873 for the use of copper rivets to strengthen points of strain on working pants.

17. Asks Warsaw residents their opinions? : POLLS POLES
The name “Warsaw” in Polish means “belonging to Warsz”. Legend has it that Warsz, was a fisherman who fell in love with a mermaid called Sawa. It’s a nice story, but actually Warsz was a nobleman from the 12th or 13th century who owned a local village.

23. Mideast chiefs : EMIRS
An emir is a prince or chieftain, most notably in the Middle East. In English, emir can also be written as emeer, amir and ameer (watch out for those spellings in crosswords!).

25. P.G.A. part: Abbr. : ASSN
The Professional Golfers’ Association (PGA) was founded in 1916 and today has its headquarters (unsurprisingly) in Florida, where so many golfers live. Back in 1916, the PGA was based in New York City.

The Yardbirds is a rock band that was very big in the sixties. It disbanded in 1968, but reformed in 1992 and is still going strong today. One of the groups most famous hits was “For Your Love”, and playing on the original recording of that song was band member Eric Clapton. Clapton left the Yardbirds soon afterwards, having gained his initial foothold in the world of rock music.

37. Music producer Brian : ENO
Brian Eno is a musician, composer and record producer from England who first achieved fame as the synthesiser player with Roxy Music. As a producer, Eno has worked with David Bowie, Devo and U2.

46. Monopoly game’s B&O and Reading: Abbr. : RRS
The four railroad properties in the Monopoly board game are:

47. “R-E-S-P-E-C-T” diva Franklin : ARETHA
I think Aretha Franklin, the Queen of Soul, had a tough life. Franklin had her first son when she was just 13-years-old, and her second at 15. In 2008, “Rolling Stone” magazine ranked Franklin as number one in their list of the greatest singers of all time.

52. ___-jongg : MAH
“Mahjong” (also “mahjongg” and “mah-jongg”) is the Chinese word for “sparrow”. Mahjong is a game that originated in China, and is usually played by four players. There is a myth that the game was developed by the Chinese philosopher, Confucius. The myth also suggests that Confucius was fond of birds, and hence chose the name “sparrow”.

The city of Dublin, the capital of Ireland, is known as Baile Átha Cliath in Irish (“town of the hurdled ford”). The English name “Dublin” is an anglicized form of the older Irish name for the city “Dubh Linn”, meaning “black pool”.

Liverpool is a large port city in the northwest of England, located on the estuary of the River Mersey. With a sense of humor that is typical of the area, people from Liverpool are often called “Liverpudlians”. The term comes from the jocular “Liver-puddle”, a diminutive of “Liver-pool”.

61. Cuba or Aruba : ISLE
Cuba is the largest island in the Caribbean. The exact etymology of the name “Cuba” seems a little unclear. Most believe “Cuba” to be derived from the Taíno terms for “where fertile land is abundant” (cubao) or “great place” (coabana).

Aruba is one of the so-called ABC Islands. The ABC Islands is the nickname given to the three westernmost islands of the Leeward Antilles in the Caribbean. The nickname comes from the first letters of the island names: Aruba, Bonaire and Curaçao. All three of the ABC Islands are part of the Kingdom of the Netherlands.

69. Church recesses : APSES
The apse of a church or cathedral is a semicircular recess in an outer wall, usually with a half-dome as a roof and often where there resides an altar. Originally, apses were used as burial places for the clergy and also for storage of important relics.

Down
1. Brand for Fido : ALPO
Alpo is a brand of dog food first produced by Allen Products in 1936, with “Alpo” being an abbreviation for “Allen Products”. Lorne Greene used to push Alpo in television spots, as did Ed McMahon and Garfield the Cat, would you believe?

3. Ozone problem : HOLE
Chlorofluorocarbons (CFCs) are the propellants that were once used in aerosols. CFCs make their way up into the ozone layer and trigger a chain reaction that converts ozone (O3) into regular oxygen (O2). That conversion creates “holes” in the ozone layer. Regular O2 is good stuff, but we need O3 to absorb harmful UV radiation raining down on us. CFC is not good stuff …

12. “We try harder” company : AVIS
Avis has been around since 1946, and is the second largest car rental agency after Hertz. Avis has the distinction of being the first car rental company to locate a branch at an airport.

23. Punctuation mark akin to a semicolon : EM DASH
In typography, there are em dashes and en dashes. The em dash is about the width of an “m” character, and an en dash about half that, the width of an “n’ character. An en dash is used, for example, to separate numbers designating a range, as in 5-10 years. The em dash seems to be going out of style, and indeed the application I am using to write this paragraph won’t let me show you one!

24. Bond girl Adams : MAUD
Maud Adams played two Bond girls, in “The Man with the Golden Gun” and “Octopussy”, both times opposite Roger Moore as James Bond. Also, Adams was visiting her friend Roger Moore while he was shooting “A View to a Kill” and can be seen in the background in in one scene. So actually, Adams was in three Bond movies.

29. Bette who won a Golden Globe Award for “Gypsy” : MIDLER
One of my favorite singers, and indeed all-round entertainers, is Bette Midler. If you’ve ever seen her live show you’ll know that “camp” is a good word to describe it, as her humor is definitely “out there” and quite bawdy. Early in her career, Midler spent years singing in the Continental Baths, a gay bathhouse in New York City. There she became very close friends with her piano accompanist, Barry Manilow. While singing in the bathhouse, Bette only wore a white towel, just like the members of her audience. It was in those days that she created her famous character “the Divine Miss M” and also earned herself the nickname “Bathhouse Betty”.

Bette Midler won a Golden Globe for her performance as Rose in the 1993 TV adaptation of the 1959 stage musical “Gypsy”.

“Gypsy” is a 1959 musical stage show with music by Jule Styne and lyrics by Stephen Sondheim. The show is loosely based on the memoirs of famous striptease artist Gypsy Rose Lee, published in 1957. The stage show focuses more on Gypsy’s mother Rose.

40. ___ the Explorer : DORA
“Dora the Explorer” is a cartoon series shown on Nickelodeon. Part of Dora’s remit is to introduce the show’s young viewers to some Spanish words and phrases.

48. French friends : AMIS
A male friend in France is “un ami”, and a female friend is “une amie”.

51. Agenda units : ITEMS
“Agenda” is a Latin word that translates as “things to be done”, coming from the verb “agere” meaning “to do”.

53. Abbreviation on a pound sign? : ASPCA
Unlike in most developed countries, there is no “umbrella” organization in the US with the goal of preventing cruelty to animals. Instead there are independent organizations set up all over the nation using the name SPCA. Having said that, there is an organization called the American Society for the Prevention of Cruelty to Animals (ASPCA) that was originally intended to operate across the country, but really it now focuses its efforts in New York City.

55. Actor Morales : ESAI
The actor Esai Morales is best known in the world of film for the 1987 movie “La Bamba”, which depicted the life of Ritchie Valens and his half-brother Bob Morales (played by Esai). On the small screen, Morales plays Lt. Tony Rodriguez on “NYPD Blue” and Joseph Adama on “Caprica”.

59. Art Deco artist : ERTE
Erté was the pseudonym of French (Russian born) artist and designer Romain de Tirtoff. Erté is the French pronunciation of his initials “R.T.” Erté’s diverse portfolio of work included costumes and sets for the “Ziegfeld Follies” of 1923, as well as productions of the Parisian cabaret show “Folies Bergère”. Erté’s most famous work by far is an image titled “Symphony in Black”. It depicts a tall and slender woman dressed in black, holding a black dog on a leash.

63. Top of a royal flush : ACE
The poker hand called a royal flush is the highest-ranking hand possible. It consists of a run of 10, Jack, Queen, King and Ace, with all in the same suit.