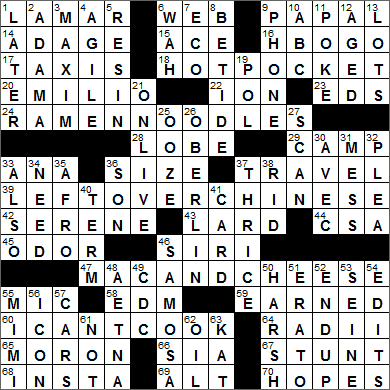 CROSSWORD SETTER: Kary Haddad
THEME: I Can’t Cook …
… so each of our themed answers is a “dish” that is easily prepared, using the simple directions in the clue:

9. Like a visit from the Bishop of Rome : PAPAL
The Catholic Church regards Saint Peter as the first to hold the papal office, as he was the first bishop of Rome. Peter took office in 30 CE, and probably died in 64 CE, making him the longest-reigning pope.

16. Way to stream “Game of Thrones” : HBO GO
The HBO Go offering is a “TV Everywhere” service, meaning that paid subscribers can stream content on a choice of platforms just by entering a username and password.

17. Uber competitors : TAXIS
Uber is a ridesharing service that was founded in 2009 and is based in San Francisco. The service is somewhat controversial and has been described as an illegal taxicab operation. Central to Uber’s service is the company’s mobile app, which can use the client’s GPS location to help find the nearest available ride. Uber’s main competitor is Lyft. Personally, I love the service and have only had good experiences …

18. [Place in crisping sleeve; microwave for 2 minutes] : HOT POCKET
Hot Pockets were introduced in the seventies by brothers David and Paul Merage. Hot Pockets are microwaveable turnovers filled with cheese, meat or vegetables.

20. One of the Estevezes : EMILIO
Emilio Estevez is one of the members of Hollywood’s famous “Brat Pack”, having appeared in “The Breakfast Club” and “St. Elmo’s Fire”. Estevez’s father (and can’t you tell it from looking at him?) is actor Martin Sheen. Estevez decided to keep his father’s real name, and not the stage name of “Sheen”. Charlie Sheen is Emilio’s brother, and Charlie’s real name is Carlos Estevez.

“Slate” is an online magazine founded in 1996. “Slate” was originally owned by Microsoft and was part of the MSN online offering. The magazine has been available for free since 1999 (it is ad-supported) and has been owned by the Washington Post Company since 2004.

24. [Boil contents for 3 minutes; stir in seasoning packet] : RAMEN NOODLES
Ramen is a noodle dish composed of Chinese-style wheat noodles in a meat or fish broth flavored with soy or miso sauce. Ramen is usually topped with sliced pork and dried seaweed. The term “ramen” is a also used for precooked, instant noodles that come in single-serving, solid blocks.

33. Santa ___ winds : ANA
The Santa Ana winds are the very dry air currents that sweep offshore late in the year in Southern California. Because these air currents are so dry, they are noted for their influence over forest fires in the area, especially in the heat of the fall. The winds arise from a buildup of air pressure in the Great Basin that lies between the Rocky Mountains and the Sierra Nevada. Under the right conditions, that air spills over the peaks of the Sierra Nevada and basically “falls” down the side of the Sierra range, heading for the ocean. As the air falls it becomes drier and heats up so that relative humidity can fall to below 10% by the time it hits the coast.

39. [Put yesterday’s General Tso’s in microwave; heat for 2 minutes] : LEFTOVER CHINESE
General Tso’s chicken is an American creation, often found on the menu of a Chinese restaurant. The name General Tso may be a reference to General Zuo Zongtang of the Qing Dynasty, but there is no clear link.

43. Hog fat : LARD
Fat, when extracted from the carcass of an animal, is called “suet”. Untreated suet decomposes at room temperature quite easily so it has to be “rendered” or purified to make it stable. Rendered fat from pigs is what we call “lard”. Rendered beef or mutton fat is known as “tallow”.

44. Gen. Beauregard’s side: Abbr. : CSA
The Confederate States of America (CSA) set up government in 1861 just before Abraham Lincoln took office. Jefferson Davis was selected as President of the CSA at its formation and retained the post for the life of the government.

P. G. T. Beauregard was a general in the Confederate Army during the Civil War. Beauregard’s most notable success was leading the defense of Petersburg, Virginia against vastly superior Union forces.

46. iPhone assistant : SIRI
Siri is software application that works with Apple’s iOS operating system. “Siri” is an acronym standing for Speech Interpretation and Recognition Interface. You’ve probably seen the ads on television, with folks talking to their iPhones asking for information and responding with a voice. I hear that Google is a little scared by Siri, as Siri is non-visual. There’s no need to touch a screen or a keyboard to work with Siri, no opportunity to click on one of Google’s ads! By the way, voice-over artist Susan Bennett revealed herself as the female American voice of Siri not that long ago. The British version of Siri is called Daniel, and the Australian version is called Karen. Also, “Siri” is a Norwegian name meaning “beautiful woman who leads you to victory”, and was the name the developer had chosen for his first child.

47. [Boil contents for 8-10 minutes; drain; add butter; stir in bright orange powder] : MAC AND CHEESE
Thomas Jefferson’s name is associated with the dish we known today as “mac ‘n’ cheese”. The future president discovered the baked macaroni with Parmesan cheese while in Paris and in northern Italy. He started serving the dish to guests in the US, and even had a machine imported to make the macaroni locally. Whether or not Jefferson was the first to bring mac ‘n’ cheese to America isn’t entirely clear, but it has been popular ever since.

64. Circle lines : RADII
Radius (plural “radii”) is a Latin word, as one might expect, meaning “spoke of a wheel”. Makes sense, huh …?

65. Imbecile : MORON
The unsavory term “moron” was formerly used by the medical community to describe someone with a degree of mental retardation. The term comes from the Greek “moros” meaning “foolish, dull”. Back in the early 1900s, IQ tests were used to classify those suffering from mental retardation into categories:

66. Singer of the 2016 #1 hit “Cheap Thrills” : SIA
Sia is the stage name of Australian singer Sia Furler from Adelaide. Sia is a cousin of Australian Christian Rock musician Peter Furler.

67. Tom Cruise hanging onto an airplane during takeoff, for example : STUNT
Tom Cruise’s real name is Tom Cruise Mapother IV. Cruise was born in Syracuse, New York, one of my favorite cities in the US, because that’s where I met my wife-to-be …

69. ___-right (modern conservative movement) : ALT
“Alt-right” is a term much associated with presidential campaign of Donald Trump. The name is descriptive of a right-wing ideology that is an alternative to mainstream conservatism in the US.

Down
2. “Battlestar Galactica” commander : ADAMA
“Battlestar Galactica” is a whole franchise these days, based on an original television series that aired in 1978. The executive producer of that first series was Glen A. Larson who had been trying get the show off the ground since the sixties. Larson was finally able to get some finances for his sci-fi show on the back of the success of the 1977 movie “Star Wars”.

7. Prefix with chic : ECO-
Something described as “eco chic” is both stylish and friendly to the environment at the same time.

Woe betide him, and her too, when it comes to things of consequence, when they are placed in circumstances requiring fortitude and strength of mind, if she have not resolution enough to resist idle interference … It is the worst evil of too yielding and indecisive a character, that no influence over it can be depended on. You are never sure of a good impression being durable; everybody may sway it. Let those who would be happy be firm.

19. Inside-the-Beltway sort : POL
A “pol” is a politician, especially one known for making deals.

26. Ohio school that pioneered coeducation : OBERLIN
Oberlin, Ohio is a city southwest of Cleveland. The city is home to Oberlin College, the biggest employer in town. Oberlin was named after Jean-Frédéric Oberlin, a pastor from Alsace. Oberlin was the first college in the country to admit African American students, and the second to admit females (after Cumberland College in Princeton, Kentucky).

32. “No contest,” for one : PLEA
“Nolo contendere” is a legal term that translates from Latin as “I do not wish to contend”. It’s the plea of “no contest” and is an alternative to “guilty” or “not guilty”, meaning that one doesn’t admit guilt but nor does one dispute the charge.

46. Indian appetizer : SAMOSA
A samosa is quite a tasty appetizer, usually a triangular-shaped savory that often has a vegetarian filling. The word “samosa” is primarily used on Indian menus, and the name comes from “sanbosag”, the name for the dish in Persia.

48. Insurance giant : AETNA
When the healthcare management and insurance company known as Aetna was founded, the name was chosen to evoke images of Mt. Etna, the European volcano.

49. Govt. health agency : CDC
The Centers for Disease Control and Prevention (CDC) is based in Atlanta, Georgia. The CDC started out life during WWII as the Office of National Defense Malaria Control Activities. The CDC worries about much more than malaria these days …

51. Muse of poetry : ERATO
In Greek mythology, Erato was the Muse of lyric poetry and is often depicted playing a lyre.

53. River into which Joan of Arc’s ashes were ordered to be thrown : SEINE
Joan of Arc (also “Jeanne d’Arc”, her birth name) led the French Army successfully into battle a number of times during the Hundred Years War with England. When she was eventually captured, Joan was tried in Rouen, the seat of the occupying English government in France at that time. There she was burned at the stake having been found guilty of heresy. In fact, after the fire died down, the executioner raked the coals to display the charred body, proving Joan had died, and then burned the corpse again, twice, so that relics could not be collected. The remaining ashes were then cast into the Seine River. Joan of Arc was canonized some 600 years later, in 1920, and is now one of the patron saints of France.

55. “La Bohème” soprano : MIMI
“La bohème” by Giacomo Puccini is the second most frequently performed opera in the US (after Puccini’s “Madama Butterfly”). The lead female role in the piece is Mimì, a seamstress.

56. Safari’s is a compass : ICON
Safari is Apple’s flagship Internet browser, mainly used on its Mac line of computers. Personally, I use Google Chrome …