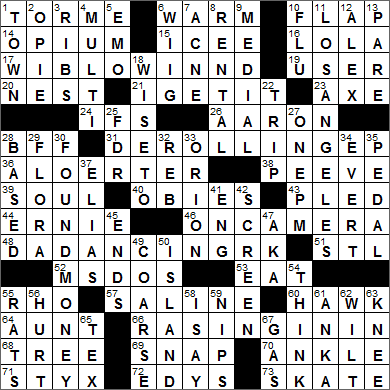 CROSSWORD SETTER: Neville Fogarty
THEME: Singing in the Middle
Today’s themed answers are the names of songs in the format “xxxxING IN THE yyyy”, with the first word actually sitting within the last in the grid:

Today’s Wiki-est, Amazonian Googlies
Across
1. Mel who co-wrote “The Christmas Song” : TORME
Mel Tormé was a jazz singer, with a quality of voice that earned him the nickname “The Velvet Fog”. Tormé also wrote a few books, and did a lot of acting. He was the co-author of the Christmas classic known as “The Christmas Song”, which starts out with the line “Chestnuts roasting on an open fire …”

14. YSL perfume named for a drug : OPIUM
The Yves Saint Laurent (YSL) perfume named Opium was introduced in 1977. Opium caused quite a stir when it hit the stores as many interpreted the use of the term “opium” as an endorsement of drug usage.

16. “Damn Yankees” seductress : LOLA
“Whatever Lola Wants” is a song from the musical “Damn Yankees”. “Damn Yankees” is actually yet another version of the classic German legend of “Faust”, set in Washington, D.C. in the fifties. The show was written by Richard Adler and Jerry Ross, a production that turned out to be a very successful follow-up to their prior hit, “The Pajama Game”. The future was looking really rosy for Adler and Ross but, sadly, Jerry Ross died of an obstructive lung disease only a few weeks after “Damn Yankees” opened on Broadway in 1955. He was just 29 years old.

19. ___ testing (part of the beta stage) : USER
In the world of software development, the first tested issue of a new program is usually called the “alpha” version. Expected to have a lot of bugs that need to be fixed, the alpha release is usually distributed to a small number of testers. After reported bugs have been eliminated, the refined version is called a “beta” and is released to a wider audience, but with the program clearly labeled as “beta”. The users generally check functionality and report further bugs that are encountered. The beta version feeds into a release candidate, the version that is tested just prior to the software being sold into the market, bug-free. Yeah, right …

26. ___ Paul, Emmy winner for “Breaking Bad” : AARON
Actor Aaron Paul is best known for playing Jesse Pinkman in the incredibly successful drama “Breaking Bad”. Paul got himself a “Breaking Bad” tattoo on the last day of filming of the series, as did fellow cast member Bryan Cranston.

39. “The ___ should always stand ajar”: Dickinson : SOUL
Emily Dickinson wrote nearly 1800 poems in her lifetime, with less than a dozen published before she died in 1886. Emily’s younger sister discovered the enormous collection, and it was published in batches over the coming decades. Here is the first verse of one of her poems:

Depart, before the Host have slid
The Bolt unto the Door —
To search for the accomplished Guest,
Her Visitor, no more —

40. Off Broadway awards : OBIES
The Obies are the “Off-Broadway Theater Awards”. The Obies are presented annually and the recipients are chosen by “The Village Voice” newspaper.

44. Comedian Kovacs with a star on the Hollywood Walk of Fame : ERNIE
Ernie Kovacs was an American comedian who was active in the fifties and early sixties. Famously, Kovacs was married to actress, singer and comedienne Edie Adams. Sadly, Kovacs died in a car accident in 1962.

46. How many try to capture Bigfoot : ON CAMERA
The yeti is a beast of legend, also called the abominable snowman. “Yeti” is a Tibetan term, and the beast is fabled to live in the Himalayan regions of Nepal and Tibet. Our equivalent legend in North America is that of Bigfoot, also known as Sasquatch. The study of animals whose existence have not yet been substantiated is called cryptozoology.

51. Cardinal’s cap letters : STL
“Dancing in the Dark” is a 1984 Bruce Springsteen song, his biggest hit. If you take a look at the music video released at the same time, it features Springsteen performing the song on stage. At the end of the video, the singer brings a fan on stage and dances with her, and that fan is played by actress Courtney Cox.

52. Platform in which you might see the prompt C:> : MS-DOS
MS-DOS (short for Microsoft Disk Operating System) was the main operating system used by IBM-compatible PCs in the eighties and for much of the nineties.

53. Exhortation after saying grace : EAT!
A “grace” is a short prayer recited before or after a meal.

55. P : RHO
Rho is the Greek letter that looks just like our Roman letter “p”.

64. “Please excuse my dear ___ Sally” (math mnemonic) : AUNT
The mnemonic “Please Excuse My Dear Aunt Sally” helps students remember the order in which operations should be carried out in a mathematical expression. The initials PEMDAS stand for Parentheses, Exponents, Multiplication, Division, Addition, Subtraction.

The actor and dancer Gene Kelly was from Pittsburgh. Kelly’s best-known performances were in the films “An American in Paris” (1951) and “Singin’ in the Rain” (1952). “Singin’ in the Rain” was co-directed by Kelly and the great Stanley Donen. A few years later, in 1960, Kelly married Jeanne Coyne, Donen’s ex-wife.

68. Rare sight on a steppe : TREE
A steppe is a grassland, devoid of trees apart from those growing near rivers and lakes. We would likely call such a geographic feature a prairie in this country.

71. River crossed by Orpheus : STYX
The River Styx in Greek mythology was the river that formed the boundary between the Earth and the Underworld (or Hades). The souls of the newly dead had to cross the River Styx in a ferry boat piloted by Charon. Traditionally, a coin would be placed in the mouths of the dead “to pay the ferryman”.

Orpheus is a figure from Greek mythology, very often associated with poetry, singing, music and the lyre in particular. In ancient Greece there was even an Orphic cult that in effect adopted the poetry ascribed to Orpheus as central to the cult’s belief system. The adjectives “Orphic” and “Orphean” describe things pertaining to Orpheus, and because of his romantic, musical bent, the term has come to describe anything melodious or enchanting.

72. Slow Churned ice cream brand : EDY’S
Dreyers’ ice cream sells its products under the name Dreyers in the Western United States, and Edy’s in the Eastern states. The company’s founders were William Dreyer and Joseph Edy.

73. Fish related to the stingray : SKATE
Skates (formally “Rajidae”) are a family of fish in the superorder of rays (formally “batoidea”). Skates look very similar to stingrays but they lack stinging spines.

Down
1. Hamlet’s relative : TOWN
A hamlet is a small village, especially one without a church apparently.

2. ’60s sitcom son : OPIE
Opie Taylor is the character played by Ron Howard on “The Andy Griffith Show”. Opie lives with widowed father Andy Taylor (played by Andy Griffith) and his great-aunt Beatrice “Aunt Bee” Taylor (played by Frances Bavier). Ron Howard first played the role in 1960 in the pilot show, when he was just 5 years old. Howard sure has come a long way since playing Opie Taylor. He has directed some fabulous movies including favorites of mine like “Apollo 13”, “A Beautiful Mind” and “The Da Vinci Code”.

3. Barbecue order : RIBS
It is believed that our word “barbecue” (BBQ) comes from the Taíno people of the Caribbean in whose language “barbacoa” means “sacred fire pit”.

6. Kristen of 2016’s “Ghostbusters” : WIIG
Kristen Wiig is a comic actress who appears on “Saturday Night Live”. She also made an appearance on the first season of Spike TV’s quirky “The Joe Schmo Show”, playing “Dr. Pat”. More recently she co-wrote and starred in the 2011 hit film “Bridesmaids”.

7. Proactiv treats it : ACNE
The Proactiv range of skincare products were introduced in 1995 by two dermatologists who met up with each other while studying at Stanford. Proactiv is market to people suffering with acne. There are quite a few folks who complain about the direct marketing approach to sales used for the products. Customers are “members” of a club, and the products keep coming until a subscription is canceled.

10. Annual vaccine target : FLU
Influenza (flu) is an ailment that is caused by a virus. The virus is readily inactivated by the use of soap, so washing hands and surfaces is especially helpful in containing flu outbreaks.

11. Where Venice is : LOS ANGELES
Venice is a Los Angeles neighborhood that was founded in 1905 as a beachfront resort town. Originally called “Venice of America”, the new town featured several miles of canals just like its Italian namesake.

12. Mike Doonesbury’s daughter in “Doonesbury” : ALEX
When cartoonist Garry Trudeau was deciding on a name for his comic strip in 1970, he opted for “Doonesbury”. He combined “doone”, which is slang for a “genial fool”, and the last syllables in “Pillsbury”, the family name of Trudeau’s roommate while he was at Yale.

25. Prez who married his fifth cousin once removed : FDR
Eleanor Roosevelt was the daughter of Elliot, brother to President Theodore Roosevelt. Eleanor met Franklin D. Roosevelt, who was her father’s fifth cousin, in 1902, and the two started “walking out together” the following year after they both attended a White House dinner with President Roosevelt.

37. Inventor Howe : ELIAS
Elias Howe was an American inventor. Howe wasn’t the first to come up with the idea of a sewing machine, but he was the first to develop one that was functional.

41. E.S.L. component: Abbr. : ENG
English as a Second Language (ESL) is sometimes referred to as English for Speakers of Other Languages (ESOL) and English as a Foreign Language (EFL).

45. Puts the kibosh on : ENDS
“Kibosh” is something that constrains or checks. “Kibosh” looks like a Yiddish word but it isn’t, and is more likely English slang from the early 1800s.

47. Letters between names : AKA
Also known as (aka)

50. Common setting for “Survivor” : ISLAND
The reality show “Survivor” is based on a Swedish television series created in 1997 called “Expedition Robinson”.

61. “My Way” lyricist Paul : ANKA
The song “My Way” has lyrics that were written by Paul Anka in 1969, but the tune itself was composed two years earlier by Claude François and Jacques Revaux. The song had been released with completely different lyrics in France as “Comme d’habitude” (“As Usual”). When Anka heard the song on television in Paris he sought out and obtained the rights to use it himself, for free. Supposedly, “Comme d’habitude” has been recorded in more languages, by more artists, than any other song in the contemporary repertoire.

63. Point of genuflection : KNEE
Our word “to genuflect” means “to bend the knee, in worship”. The term comes to us via French from the Latin “genu” meaning “knee” and “flectere” meaning “to bend”.