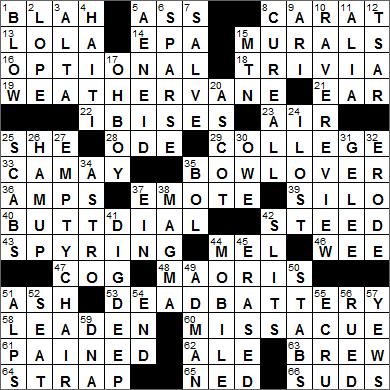 CROSSWORD SETTER: John Lampkin
THEME: There’s No Need to Pay
We have themed clues in this puzzle, as opposed to the usual themed answers. Today’s themed clues are all phrases used to mean “There’s no need to pay”. But, each of those phrases has been interpreted more literally in the answer:

Today’s Wiki-est, Amazonian Googlies
Across
8. 100 points, to a jeweler : CARAT
A carat is a unit of mass used to measure gemstones and pearls. There are one hundred points in a carat, each equal to 2 milligrams. So a carat is equal to 200 milligrams.

13. Who sings “A Little Brains, A Little Talent” in “Damn Yankees” : LOLA
In the musical show “Damn Yankees”, the title refers to the New York Yankees baseball team that dominated the sport in the fifties. That said, the show tells the story of the a man who sells his soul to help his beloved Washington Senators team beat the Yankees and win the pennant. So, “Damn Yankees” is yet another version of the classic German legend of “Faust”. The show was written by Richard Adler and Jerry Ross, a production that turned out to be a very successful follow-up to their prior hit, “The Pajama Game”. The future was looking really rosy for Adler and Ross but, sadly, Jerry Ross died of an obstructive lung disease only a few weeks after “Damn Yankees” opened on Broadway in 1955. He was just 29 years old.

15. Unhung paintings : MURALS
A “mural” is a painting that is applied directly to a wall or a ceiling. The term comes from the Latin “murus” meaning “wall”.

18. ___ night (bar attraction) : TRIVIA
Trivia are things of little consequence. “Trivia” is the plural of the Latin word “trivium” which means “a place where three roads meet”. Now that’s what I call a trivial fact …

21. Mr. Potato Head piece : EAR
Mr. Potato Head is an enduring popular toy that has been around since its invention by George Lerner in 1949. In its original form, the toy was a collection of eyes, ears, and other facial features, that were designed to be stuck into a real potato. Mr. Potato Head also has the distinction of being the first toy ever to be advertised on television.

22. Objects of religious veneration in ancient Egypt : IBISES
The ibis is a wading bird that was revered in ancient Egypt. “Ibis” is an interesting word grammatically speaking. You can have one “ibis” or two “ibises”, and then again one has a flock of “ibis”. And if you want to go with the classical plural, instead of two “ibises” you would have two “ibides”!

25. “That’s all ___ wrote” : SHE
No one seems to be very certain of the origin of the phrase “that’s all she wrote”. One popular story though is that it stems from the unfortunate “Dear John” letters that some soldiers received during WWII.

Lo! where the rosy-bosom’d Hours,
Fair Venus’ train appear,
Disclose the long-expecting flowers,
And wake the purple year!
The Attic warbler pours her throat,
Responsive to the cuckoo’s note,
The untaught harmony of spring:
While whisp’ring pleasure as they fly,
Cool zephyrs thro’ the clear blue sky
Their gather’d fragrance fling.

29. Emerson or Dickinson : COLLEGE
Emerson College, located in Boston’s Washington Street Theater District, offers degree programs focused on Arts and Communication. The school was founded in 1880 by Charles Wesley Emerson as the Boston Conservatory of Elocution, Oratory and Dramatic Art.

Dickinson College in Carlisle, Pennsylvania was founded 1773 as Carlisle Grammar School by Benjamin Rush, one of the signatories on the US Declaration of Independence. Dickinson was chartered by the Pennsylvania legislature in 1783, just six days after signing of the Treaty of Paris that ended the American Revolution. That makes Dickinson the first college to be chartered in the United States.

33. Brand once billed as “the soap of beautiful women” : CAMAY
Camay is a brand of soap produced by Procter & Gamble since 1926. Camay was introduced as a “white, pure soap for women”.

36. Some sound equipment : AMPS
An electric guitar, for example, needs an amplifier (amp) to take the weak signal created by the vibration of the strings and turn it into a signal powerful enough for a loudspeaker.

39. Fodder’s place, but not a mudder’s : SILO
“Silo” is a Spanish word that we absorbed into English, originally coming from the Greek word “siros” that described a pit in which one kept corn.

A mudder is a racehorse, one that runs well on a wet or muddy track.

40. Call inadvertently, in a way : BUTT DIAL
“Butt dialing” is an alternative name for “pocket dialing”, the accidental placing of a call while a phone is in one’s pocket or purse.

44. Blanc who voiced Daffy Duck : MEL
Daffy Duck first appeared on the screen in “Porky’s Duck Hunt” in 1937. In the original cartoon, Daffy was just meant to have a small role, but he was a big hit as he had so much sass. Even back then, Daffy was voiced by the ubiquitous Mel Blanc.

48. Some New Zealanders : MAORIS
The Māori are the indigenous people of New Zealand. The Māori are eastern Polynesian in origin and began arriving in New Zealand relatively recently, starting sometime in the late 13th century. The word “māori” simply means “normal”, distinguishing the mortal human being from spiritual entities.

65. Actor Beatty : NED
Actor Ned Beatty is probably best remembered for the rather disturbing “squeal like a pig” scene in the movie “Deliverance”. Beatty also earned an Academy Award nomination as Best Supporting Actor for his performance in the 1976 movie “Network”.

4. Half of Hispaniola : HAITI
Hispaniola is an island in the Greater Antilles, and is the second largest island in the Caribbean after Cuba. The island is shared by the Dominican Republic and Haiti. Hispaniola was home to the first European settlement in the whole of the Americas, founded by Christopher Columbus in 1492. Columbus named the island La Isla Española, which evolved to “Hispaniola”.

5. Work in which Dido died : AENEID
Aeneas was a Trojan who traveled to Italy and became the ancestor of all Romans. Aeneas’s story is told in Virgil’s epic poem “The Aeneid”.

Dido was the founder of Carthage, and the city’s first queen.

8. Panacea : CURE-ALL
Panacea was the Greek goddess of healing. She lent her name to the term “panacea” that was used by alchemists to describe the beguiling remedy that could cure all diseases and prolong life indefinitely.

9. Cardinals, in stats : ARI
The Arizona Cardinals were founded in 1898 as the Chicago Cardinals. That makes the Cardinals the oldest, continuously-run professional football team in the whole country.

20. Natty neckwear : ASCOT
An Ascot tie is a horrible-looking (I think!) wide tie that narrows at the neck, which these days is only really worn at weddings. The tie takes its name from the Royal Ascot horse race at which punters still turn up in formal wear at Ascot Racecourse in England.

26. Overplay : HAM UP
The word “ham”, describing a performer who overacts, is apparently a shortened form of “hamfatter” and dates back to the late 1800s. “Hamfatter” comes from a song in old minstrel shows called “The Ham-Fat Man”. It seems that a poorly performing actor was deemed to have the “acting” qualities of a minstrel made up in blackface.

34. “___ Boy” (1960s cartoon series) : ASTRO
“Astro Boy” is a manga cartoon series that appeared in print in the fifties and sixties. It was adapted for television starting in 1963, making it the first Japanese TV series in the genre now known as “anime”.

35. Neighbor of Peru: Abbr. : BOL
Bolivia is a landlocked country in South America, bordered by Brazil, Paraguay, Chile, Peru and Argentina. The land now occupied by Bolivia was originally part of the Inca Empire. The country declared independence from Spain in 1809, which led to 16 years of war. When the Republic was finally named, “Bolivia” was chosen in honor of the Venezuelan-born revolutionary leader, Simón Bolívar.

38. Soft rock? : MAGMA
Magma is the molten material below the Earth’s surface. When magma cools, it forms igneous rock. “Magma” is a Greek term used for a thick ointment.

44. Cellphone, to a Brit : MOBILE
What we mostly call a cellphone in North America is more usually referred to as a mobile phone in Europe. In German, it’s referred to casually as a “Handy”.

51. Range of the von Trapp singers : ALPS
“The Sound of Music” is a Rodgers and Hammerstein musical, made into a celebrated movie in 1965 starring Julie Andrews and Christopher Plummer. The musical is based on “The Story of the Trapp Family Singers”, a memoir by Maria von Trapp. The von Trapp family ended up in Stowe, Vermont after the war, and one family descended from the Vermont von Trapps lives here in the same town in which I live in California.

55. Eggshell shade : ECRU
The shade called ecru is a grayish, yellowish brown. The word “ecru” comes from French and means “raw, unbleached”. “Ecru” has the same roots as our word “crude”.

57. Trees with red berrylike fruit : YEWS
The family of trees known as yews propagate by producing a seed surrounded by soft, sweet and brightly colored aril. Birds eat the fruit and then disperse the seed in their droppings. The birds leave the seed undamaged, and so are unharmed by the potent poisons taxine and taxol that are found within the seed. The seeds are highly toxic to humans.