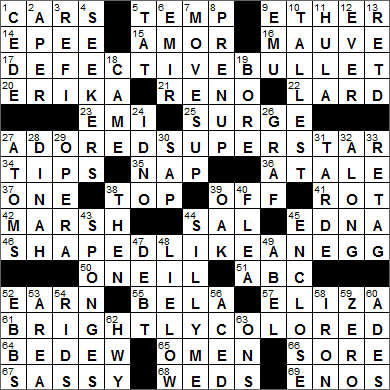 CROSSWORD SETTER: Jonathan M. Kaye
THEME: Top Off
We have themed clues again today. Each clue is a seemingly meaningless string of numbers and letters. If we draw a horizontal line through that string of numbers, and then ignore the TOP half, the bottom half gives us our clue:

Today’s Wiki-est, Amazonian Googlies
Across
9. Thin air : ETHER
The Greek philosopher Empedocles proposed that there are four elements that made up the universe, namely earth, water, air and fire. Aristotle later proposed a fifth element which he called aether (also “ether”). Aether was the divine substance that made up the stars and planets.

14. Electrified bit of sports equipment : EPEE
The French word for sword is “épée”. In competitive fencing the épée is connected to a system that records an electrical signal when legal contact is made on an opponent’s body.

16. Light violet : MAUVE
The name given to the light violet color that we know as “mauve” comes via French from the Latin “malva”. The Latin term translates as “mallow”, the common name of several species of plants, many of which have mauve-colored flowers.

20. Christensen of “Parenthood” : ERIKA
Actress Erika Christensen is probably best known for playing a young cocaine addict in the film “Traffic” (2000), and the youngest daughter of the Braverman family on the TV show “Parenthood”.

21. City whose name, appropriately, rhymes with “casino” : RENO
The city of Reno’s economy took off when open gambling was legalized in Nevada in 1931. Within a short time, a syndicate had built the Bank Club in Reno, which was the largest casino in the whole world at the time.

22. Ingredient in old-time cookie recipes : LARD
Fat, when extracted from the carcass of an animal, is called “suet”. Untreated suet decomposes at room temperature quite easily so it has to be “rendered” or purified to make it stable. Rendered fat from pigs is what we call “lard”. Rendered beef or mutton fat is known as “tallow”.

23. Record co. excoriated in a Sex Pistols song : EMI
EMI was a British music company, with the abbreviation standing for Electric and Musical Industries.

34. Tout’s stock-in-trade : TIPS
A “tout” (mainly in the British Isles) is someone who checks out racehorses and sells information gained to people placing bets.

35. Fuzz : NAP
A “nap” is a soft and perhaps fuzzy surface on cloth, leather, a carpet and even a tennis ball.

44. Actor Mineo : SAL
The actor Sal Mineo’s most famous role was John “Plato” Crawford, the kid who was in awe of the James Dean character in “Rebel Without a Cause”. Sadly, Mineo was murdered in 1976 when he was just 37 years old. He was attacked in the alley behind his Los Angeles apartment and stabbed through the heart. When an arrest was made it was discovered that the murderer had no idea that his victim was a celebrity, and that his plan was just to rob anyone who came along.

45. Novelist O’Brien : EDNA
Edna O’Brien is an Irish novelist and playwright who is known for her works that shine a light on the problems of women relating to men and society in general. O’Brien’s first novel, “The Country Girls”, was banned, burned and denounced by the Roman Catholic Church in Ireland. As a result, O’Brien left the country and now lives in London.

50. Baseball great Buck : O’NEIL
Buck O’Neil was a first baseman and manager with the Kansas City Monarchs, a team in the Negro American League.

55. Actor Lugosi : BELA
Bela Lugosi was a Hungarian stage and screen actor, best known for playing the title role in the 1931 film “Dracula” and for playing the same role on Broadway. Lugosi found himself typecast for the rest of his career and almost always played the role of the villain, often in horror movies. When he passed away in 1956, his wife had him buried in the costume he wore playing Count Dracula on Broadway.

Down
4. Positions in Quidditch : SEEKERS
Quidditch is a game that is famously played in the “Harry Potter” series of books and films. The game is contended by two teams of seven wizards or witches flying on broomsticks. The are four animated balls and six ring-shaped goals floating in mid-air. One of the balls is the Golden Snitch, and one of the players is the Seeker. It is the Seeker’s sole purpose to capture the Golden Snitch and thereby end the game.

5. Result of needling someone? : TAT
The word “tattoo” (often shortened to “tat”) was first used in English in the writings of the famous English explorer Captain Cook. In his descriptions of the indelible marks adorning the skin of Polynesian natives, Cook anglicized the Tahitian word “tatau” into our “tattoo”.

6. Arabian prince : EMIR
In English, emir can also be written as emeer, amir and ameer (watch out for those spellings in crosswords!).

9. One of the 10-Down birds in the world : EMU
10. See 9-Down : TALLEST
The tallest living bird is the ostrich, which can reach over nine feet in height.

11. Kind of skirt : HULA
The hula skirt is a grass skirt.

19. Gun measure : BORE
The gauge of a gun is the inside diameter of the weapon’s barrel, the width of the bore.

26. Navratilova rival : GRAF
Steffi Graf is a former World No. 1 professional tennis player from Germany. Graf won 22 Grand Slam singles titles, more than any other man or woman other than Margaret Court. She is married to another former World No. 1, namely Andre Agassi.

Martina Navratilova is a retired tennis player who is thought by many to have been the greatest player of all time. Navratilova won the Wimbledon singles title a record nine times, which is one of many records that she holds. She was born in Czechoslovakia but asked for political asylum in the US in 1975 at 18 years of age. Navratilova was granted temporary residency in the US and as a result was stripped of her Czech citizenship. That Czech citizenship was restored in 2008, making her a dual citizen.

28. 1956 jazz/blues album with an exclamation point : DINAH!
Dinah Washington was the stage name of the blues and jazz singer Ruth Lee Jones. Apparently when she was once performing at the famed London Palladium she announced (with Queen Elizabeth II sitting in the Royal Box), “There is but one Heaven, one Hell, one queen, and your Elizabeth is an impostor.” That would have created a bit of a stir …

29. “Porgy and Bess,” e.g. : OPERA
“Porgy and Bess” is an opera with music by George Gershwin, lyrics by Ira Gershwin, and libretto by DuBose Heyward. The storyline of the opera is based on the novel “Porgy” written by DuBose Heyward and and wife Dorothy. “Porgy and Bess” was first performed in 1935, in New York City, but really wasn’t accepted as legitimate opera until 1976 after a landmark production by the Houston Grand Opera. The most famous song from the piece is probably the wonderful aria “Summertime”.

30. Person taken for a fool : SAP
“Sap” is slang for a fool, someone easily scammed. The term arose in the early 1800s in Britain when it was used in “saphead” and “sapskull”. All these words derive from “sapwood”, which is the soft wood found in tree trunks between the bark and the heartwood at the center.

31. Afternoon, to Alejandro : TARDE
“Tarde” is Spanish for “afternoon”.

39. Royal ___ (Detroit suburb) : OAK
The Detroit suburb of Royal Oak was incorporated as a village in 1891. The name was given to the area in 1819 by former US Secretary of State Lewis Cass when he was Governor of the Michigan Territory. He saw there a large oak tree that reminded him of the Royal Oak in which King Charles II of England escaped after the Battle of Worcester.

48. Avoid the limelight : LIE LOW
Limelight was an early form of stage lighting that was also known as Drummond Light. The illumination came from the burning of quicklime (calcium hydroxide), hence the name. Although limelights are a thing of the past, the term “in the limelight” is still used when describing someone in the public eye.

49. Biblical anagram of 55-Across : ABEL
(55. Actor Lugosi : BELA)
In the story of Cain and Abel in the Book of Genesis, Cain murders his brother Abel. Subsequently, God asks Cain, “Where is Abel thy brother?” Cain replies, “I do not know. Am I my brother’s keeper?”

53. Bailiwick : AREA
Bailiwick is a word dating back to the mid-1600s, and originally meant the “district of a bailiff”.

60. Some sources of vitamin C : ADES
The essential nutrient referred to as vitamin C is also called L-ascorbic acid or ascorbate. A lack of vitamin C causes the disease scurvy.