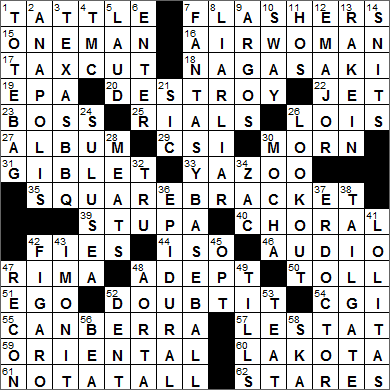 16. Amelia Earhart, e.g. : AIRWOMAN
Amelia Earhart is as famous today as she was during her lifetime. When she became the first woman to fly solo across the Atlantic she was awarded the Distinguished Flying Cross by Congress, and the Cross of Knight of the Legion of Honor by the French government. She made two attempts to circumnavigate the globe by air (not solo). Her first attempt in March 1937 had to be abandoned when her aircraft was damaged during takeoff. The second attempt in June/July of the same year ended when Earhart and her navigator disappeared flying from Lae, New Guinea to Howland Island in the Central Pacific.

18. Far Eastern city whose name means “long cape” : NAGASAKI
Nagasaki is a large port city on the Japanese island of Kyushu. Towards the end of WWII, Nagasaki was chosen as the target for the second atomic bomb dropped by the US, three days after the first bomb was dropped on Hiroshima. The second bomb was code-named “Fat Man”, and was delivered in a B-29 dubbed “Bockscar” that was piloted by Major Charles Sweeney. Nagasaki was not the primary target for the mission, but rather the city of Kokura. On the day of the raid, visibility over Kokura was poor due to cloud and smoke, so Bockscar flew on to Nagasaki.

20. Torpedo : DESTROY
The naval weapon called a torpedo is named for the group of electric rays of the genus “Torpedo”. The name of the fish comes from the verb “torpere”, Latin for “to be stiffened, paralyzed”, which is what happens to someone who steps on an electric ray.

25. Dough made in the Middle East? : RIALS
“Rial” is name of the currency of several countries in the world, including Iran, Yemen, Oman, Cambodia and Tunisia.

26. Lane in a strip : LOIS
Lois Lane has been the love interest of Superman/Clark Kent since the comic series was first published in 1938. Lois and Clark both work for the big newspaper in the city of Metropolis called “The Daily Planet”. The couple finally got hitched in the comics (and on television’s “Lois and Clark”) in 1996. But never mind all that … one has to wonder how challenging the crossword is in “The Daily Planet” …

29. Long-running Vegas show : CSI
The “CSI” franchise of TV shows has been remarkably successful. That said, only one of the four “CSI” shows is now in production (“CSI: Cyber”). The franchise consists of:

31. Gravy goody : GIBLET
Goody? The giblets are the edible internal organs and entrails of a fowl. The giblets include the heart, gizzard and liver.

33. Mississippi feeder : YAZOO
The Yazoo River in the state of Mississippi was named by the French explorer La Salle after the Yazoo Native American tribe who lived near the river’s mouth. It was in the Yazoo River that a naval mine was used for the first time to sink a ship, in 1862. The Confederates successfully used a mine to sink the Union’s ironclad USS Cairo during the Civil War.

35. Backslash neighbor : SQUARE BRACKET
On a standard US keyboard, the square brackets keys lie just to the left of the backslash key.

39. Buddhist memorial dome : STUPA
A stupa is a place of worship in the Buddhist tradition. “Stupa” is a Sanskrit word meaning “heap” and a stupa is a mound-like structure that contains relics, possibly even the remains of Buddha.

40. Like motets : CHORAL
A motet is a simple musical composition based on a sacred text, usually sung without an accompaniment. The term “motet” is a diminutive form of “mot”, the French for “word”.

44. One-on-one basketball play, slangily : ISO
In an isolation play (iso) in basketball, teammates draw their defenders away the ball-handler leaving him or her to beat an opponent one-on-one.

55. City called the Bush Capital : CANBERRA
Canberra is the capital city of Australia. The city is located in what’s called the Australian Capital Territory (ACT) an area independent of any of the other Australian territories. In this sense, there is a similarity between Canberra in the ACT and Washington in the District of Columbia. Canberra was chosen as the nation’s capital in 1908, a choice that was a compromise in deference to the two largest cities, Sydney and Melbourne.

The Australian capital of Canberra incorporates large areas of natural vegetation in its design, leading to city’s nickname “bush capital”.

62. They’re drawn by the bizarre : STARES
“Bizarre” is a French word, with the same meaning in French as English. However, back in the 16th century, “bizarre” used to mean “handsome, brave” in French. So that’s what my wife means when she refers to me as “bizarre” …

Down
2. Brazilian city name that sounds like a U.S. state capital : ANAPOLIS
Anápolis is a city in Brazilian state of Goiás in the Center-West of the country.

4. Alternative to SHO : TMC
Showtime (SHO) is a competitor of the Movie Channel (TMC) in terms of program lineup, although both channels are in fact owned by CBS.

8. 1997 comedy with the tagline “Trust me” : LIAR LIAR
The full rhyme used by children to deride someone not telling the truth is:

The rhyme is the source of the title for the 1997 Jim Carrey comedy “Liar Liar”. “Liar Liar” is an amusing film about a lawyer who finds himself only able to tell the truth and cannot tell a lie, all because his son made a birthday wish.

9. Odysseus’ faithful dog : ARGOS
According to Homer’s “Odyssey”, Argos is a dog, the faithful companion of Odysseus. Odysseus leaves his home, and his dog, for twenty years to wage battle in Troy. When Odysseus returns, he must enter his house disguised as a beggar in order to rescue his wife Penelope from unwelcome suitors. Odysseus sees his dog, neglected, lying on a pile of manure and close to death. Much as he wants to comfort the dog, Odysseus maintains his disguise and ignores Argos, even though the dog just manages to wag his tail on seeing his master’s return, but has not the strength to greet him. As Odysseus enters his house, Argos dies.

12. Key of Chopin’s étude “Tristesse” : E MAJOR
The famous melody in Chopin’s Étude Op. 10, No. 3 was declared by the composer to be his own favorite. The piece is sometimes referred to as “Tristesse” (meaning “Sadness”) or “Farewell”.

21. Word with a 35-Across before and after it : SIC
(35A. Backslash neighbor : SQUARE BRACKET)
[Sic] indicates that a quotation is written as originally found, perhaps including a typo. “Sic” is Latin for “thus, like this”. The term is more completely written as “sic erat scriptum”, which translates as “thus was it written”.

28. Charcuterie, e.g. : MEATS
In French, a “charcutier” is a pork butcher, although the term “charcuterie” has come to describe a genre of cooking focused on prepared meats such as bacon, ham, sausage and pâté. Although these meats often feature pork, it is not exclusively so. The word “charcuterie” comes from the French “chair” meaning “flesh” and “cuit” meaning “cooked”.

32. Tony-winning title role of 1990 : TRU
“Tru” was written by Jay Presson Allen and is a play about Truman Capote that premiered in 1989. There is a classic anachronism in the piece. It is set in Capote’s New York City apartment at Christmas 1975. At one point the Capote character talks about suicide, saying that he has enough pills to stage his own Jonestown Massacre. The Jonestown Massacre didn’t happen until three years later, in 1978.

37. One handling an OD : ER DOCTOR
An emergency room (ER) doctor might have to deal with an overdose (OD).

41. Teases, in older usage : LOLITAS
A “lolita” is a precocious young girl, a nymphet, and is a term coming from Vladimir Nabokov’s novel “Lolita”.

Vladimir Nabokov’s novel “Lolita” has a famously controversial storyline, dealing with a middle-aged man’s obsession and sexual relationship with a 12-year-old girl. Although “Lolita” is considered a classic today, after Nabokov finished it in 1953 the edgy subject matter made it impossible for him to find a publisher in the US (where Nabokov lived). In 1955, he resorted to publishing it in English at a printing house in Paris. Publication was followed by bans and seizures all over Europe. A US printing house finally took on the project in 1958, by which time the title had such a reputation that it sold exceptionally quickly. “Lolita” became the first book since “Gone with the Wind” to sell over 100,000 copies in its first three weeks in stores.

42. French daily, with “Le” : FIGARO
“Le Figaro” is one of the main French daily newspapers, along with “Le Parisien” and “Le Monde”. It was founded as a satirical publication in 1826, with the title a reference to the Pierre Beaumarchais comedy play “The Marriage of Figaro”.

43. Lackey’s response : I’M ON IT
A lackey is someone quite servile, or a male servant. The term probably comes from the Middle French “laquais”, a word used for a footman or servant.

48. Big supply line : AORTA
The aorta originates in the heart and extends down into the abdomen. It is the largest artery in the body.

56. Arthur with a Tony : BEA
Actress Bea Arthur’s most famous roles were on television, as the lead in the “All in the Family” spinoff “Maude” and as Dorothy Zbornak in “The Golden Girls”. Arthur also won a Tony for playing Vera Charles on stage in the original cast of “Mame” in 1966, two years after she played Yente the matchmaker in the original cast of “Fiddler on the Roof”.

58. Genre for Reel Big Fish : SKA
Reel Big Fish is a ska punk band from Southern California that was founded in 1991.