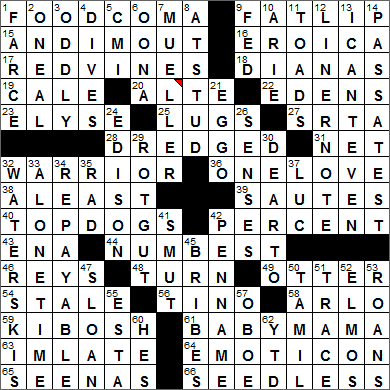 Today’s Wiki-est, Amazonian Googlies
Across
1. Postprandial woe : FOOD COMA
Something described as “preprandial” takes place before a meal, with “postprandial” coming after the meal. The term derives from “prandium”, the Latin for “luncheon”.

16. Classical record on Norman Bates’s turntable in “Psycho” : EROICA
Beethoven originally dedicated his Symphony No. 3 to Napoleon Bonaparte. Beethoven admired the principles of the French Revolution and as such respected Bonaparte who was “born” out of the uprising. When Napoleon declared himself Emperor, Beethoven (and much of Europe) saw this as a betrayal to the ideals of the revolution so he changed the name of his new symphony from “Bonaparte” to “Eroica”, meaning “heroic” or “valiant”.

The classic Alfred Hitchcock suspense film “Psycho” released in 1960 is based on a 1959 novel of the same name by Robert Bloch. The Bloch novel in turn is loosely based on actual crimes committed by murderer and grave robber Ed Gein. When “Psycho” was making its initial run in theaters, latecomers were not granted admission, a policy instigated by Hitchcock himself. He felt that anyone missing the opening scenes would not enjoy the film.

17. Licorice candy that was originally raspberry-flavored : RED VINES
Liquorice (also licorice) and aniseed have similar flavors, but they come from unrelated plants. The liquorice plant is a legume like a bean, and the sweet flavor is an extract from the roots. The flavor mainly comes from an ether compound called anethole, the same substance that gives the distinctive flavor to anise. The seedpods of the anise plant are what we know as “aniseed”. The anise seeds themselves are usually ground to release the flavor.

18. Ross and Spencer : DIANAS
Diana Ross is one of the most prolific recording artists in history. She sang with the Supremes from 1959 to 1970 and then launched an incredibly successful solo career. Ross was listed in the 1993 edition of “The Guinness Book of World Records” as the most successful music artist ever, with eighteen #1 records.

23. Alex’s mom on “Family Ties” : ELYSE
“Family Ties” was one of the first TV shows that I enjoyed when I arrived in the US back in 1983. I found the situation very appealing, with two ex-hippie parents facing off against an ultra-conservative son. The main characters in the show were Michael J. Fox as Alex, Meredith Baxter-Birney as Alex’s mom, Elyse, and Michael Gross as Alex’s Dad, Steven. But some future stars had recurring roles as well, including Courteney Cox as one of Alex’s girlfriends and Tom Hanks as Elyse’s young brother.

36. Classic song with the lyric “Let’s get together and feel all right” : ONE LOVE
“One Love” is a classic reggae song from 1977 recorded by Bob Marley and the Wailers. A ska version of “One Love” had been released by the Wailers as early as 1965, but it is the 1977 release that we all remember, I am sure.

38. Rays are in it : AL EAST
The Tampa Bay Rays are a relatively “young” baseball franchise, being formed in 1998. The initial name of the franchise was the Tampa Bay Devil Rays. While known as the Devil Rays, the team finished last in the league in almost every year. The name was changed to the Tampa Bay Rays in 2008, and I am told the Rays started into a streak of winning seasons soon after.

39. Browns : SAUTES
“Sauté” is a French word. The literal translation from the French is “jumped” or “bounced”, a reference to the tossing of food while cooking it in a frying pan.

40. Head honchos : TOP DOGS
“Honcho” is a slang term for a leader or manager. The term comes to us from Japanese, in which language a “hancho” is a squad (han) leader (cho).

43. Disney aunt : ENA
Ena is Bambi’s aunt in the 1942 Disney film “Bambi”. The movie is based on the novel “Bambi, A Life in the Woods” written by Austrian author Felix Salten and first published in 1923. There is a documented phenomenon known as the Bambi Effect, whereby people become more interested in animal rights after having watched the scene where Bambi’s mother is shot by hunters.

49. Oyster cracker? : OTTER
The fur of the sea otter is exceptionally thick. It is in fact the densest fur in the whole animal kingdom.

56. Two-time All-Star Martinez : TINO
First baseman Tino Martinez has retired from Major League Baseball. Martinez played for a number of teams including the Mariners, Yankees, Cardinals and Devil Rays. Martinez was born and raised in Tampa, Florida and as a boy he worked in his father’s cigar factory.

58. Half of a comic strip duo : ARLO
The comic strip “Arlo and Janis” is written by Jimmy Johnson. Introduced in 1985, Arlo and Janis are a baby booming couple with an easy approach to life, and who are very much in love.

59. Put an end to : KIBOSH
“Kibosh” is something that constrains or checks. “Kibosh” looks like a Yiddish word but it isn’t, and is more likely English slang from the early 1800s.

64. Small show of one’s feelings : EMOTICON
An emoticon is a glyph created using text characters to represent facial features, and usually oriented sideways. The emoticon is designed to indicate emotion or attitude. The classic example is the smiley face 🙂

Down
1. “Broad City,” for one : FARCE
“Broad City” is a sitcom shown on comedy Central that started out life as a web series on the Internet. It’s about two young Jewish American women having misadventures in New York City.

4. Low bars : DIVES
We’ve been using the word “dive” in American English for a run-down bar since the latter half of the 19th century. The term comes from the fact that disreputable taverns were usually located in basements, so one had to literally and figuratively dive into them.

6. Chaplin of “Game of Thrones” : OONA
Oona Chaplin is an actress from Madrid in Spain. Chaplin is getting a lot of airtime these days as she plays Talisa Maegyr on HBO’s hit fantasy series “Game of Thrones”. Oona is the granddaughter of Charlie Chaplin, and is named for her maternal grandmother Oona O’Neill. the daughter of playwright Eugene O’Neill.

8. Like many retired Derby winners : AT STUD
The word “stud”, meaning “a male horse kept for breeding”, is derived from the Old English word “stod”, which described a whole herd of horses.

9. Like parking meters : FED
An early patent for a parking meter, dated 1928, was for a device that required the driver of the parked car to connect the battery of his or her car to the meter in order for it to operate!

12. It may be a credit to the band : LINER NOTE
These days, the term “liner notes” is used for the informational booklet which comes with a music CD. The original liner notes were the informational text printed on the inner sleeve (“liner”) of a 12-inch vinyl record.

21. Something that may pop up in the morning : EGGO
Eggo is the brand name of a line of frozen waffles made by Kellogg’s. When they were introduced in the 1930s, the name “Eggo” was chosen to promote the “egginess” of the batter. “Eggo” replaced the original name chosen, which was “Froffles”, created by melding “frozen” and “waffles”.

24. Who said “Opportunity is missed by most people because it is dressed in overalls and looks like work” : EDISON
Thomas Edison was a very successful inventor. He held over a thousand US patents in his name. Included in the list of Edison’s inventions is the phonograph, the movie camera and the long-lasting light bulb. He passed away in 1931. There is a test tube at the Henry Ford Museum that supposedly holds Edison’s last breath. Ford convinced Thomas’s son Charles to seal up a tube of air in the room just after the inventor died, as a memento.

35. Old dope? : RAD
Not so long ago, the term “rad” was used routinely to mean “super awesome, super cool”. Apparently nowadays, folks use the term “dope” to mean the same thing.

42. Ann Landers, for one : PEN NAME
“Ask Ann Landers” was an advice column written by Eppie Lederer from 1995 to 2002. Eppie was the twin sister to Pauline Phillips, the person behind “Dear Abby”. Eppie took over the “Ask Ann Landers” column from Ruth Crowley who started it in 1943.

50. Linguistic origin of “mulligatawny” : TAMIL
Mulligatawny is a thick soup spiced with curry powder and nutmeg. It is an English recipe that was developed in India during the days of the Raj. The name “mulligatawny” comes from the Tamil for “pepper water”.

52. Ticklish dolls : ELMOS
The toy called Tickle Me Elmo was a sensational fad in the late nineties, with stores raising prices dramatically above the recommended retail price to take advantage of demand. Reportedly, prices as high as $1500 were paid at the height of the craze. The toy’s manufacturer, Tyco, originally planned to market the “tickle” toy as Tickle Me Tasmanian Devil (after the “Looney Tunes” character), but then went with “Elmo” after they bought the rights to use “Sesame Street” names.

53. They have coats with white hairs : ROANS
A roan horse has an even mixture of white and colored hairs on the body with the head, lower legs, mane and tail having a more solid color.