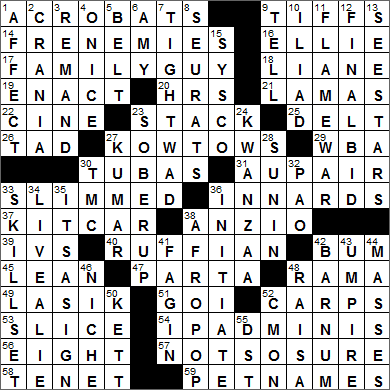 Today’s Wiki-est, Amazonian Googlies
Across
14. Ones with love-hate relationships, say : FRENEMIES
A frenemy is someone who feigns friendship but who is actually an enemy or competitor.

16. Pop singer Goulding : ELLIE
Ellie Goulding is a singer-songwriter from England. One of Goulding’s claims to fame is that she sang at the wedding reception of Prince William and Kate Middleton at Buckingham Palace in 2011.

17. Show on which Adam West voices Mayor Adam West : FAMILY GUY
“Family Guy” is a very successful animated show on television. It was created by Seth MacFarlane, the same guy who came up with “American Dad!”. My kids love them both. Me, I can’t stand ‘em.

Adam West is the actor who played the title role in the sixties TV series “Batman”. These days you might hear West as the voice of a character called “Adam West” on the animated show “Family Guy”. Back in 1970, West was offered the role of James Bond in the movie “Diamonds are Forever”, but he turned it down!

22. César subject : CINE
The César Award is the national film award of France. The first César was awarded in 1975, named after the French sculptor César Baldaccini. The awards themselves are reproductions of an actual Baldaccini sculpture.

25. Press target, informally : DELT
The deltoid “muscle” is actually a group of muscles, the ones that cover the shoulder and create the roundness under the skin. The deltoids are triangular in shape resembling the Greek letter delta, hence the name.

26. Soupçon : TAD
“Soupçon” translates literally from French into English as “suspicion”, and can be used in the sense that a “suspicion” of something is a just a hint, a crumb.

27. Is a kiss-up : KOWTOWS
To kowtow is to show servile deference. “Kowtow” comes from the Chinese “k’o-t’ou” which is the name for the custom of kneeling and touching the forehead to the ground in a gesture of respect. The Chinese term literally translates as “knock the head”.

30. Bass brass : TUBAS
The tuba is the lowest-pitched of all the brass instruments, and one of the most recent additions to the modern symphony orchestra (usually there is just one tuba included in an orchestral line-up). “Tuba” is the Latin word for “trumpet, horn”. Oom-pah-pah …

31. Foreign aide : AU PAIR
An “au pair” is a domestic assistant from a foreign country working and living as part of a host family. The term “au pair” is French, and means “on a par”, indicating that an au pair is treated as an equal in the host family.

38. W.W. II landing site in Italy : ANZIO
The WWII Battle of Anzio is famous for being one of the most terrible blunders in military history. Operation Shingle was a surprise amphibious landing at Anzio, 35 miles south of Rome, designed to outflank the Germans and press home an attack on the Italian capital. The element of surprise allowed a safe landing at Anzio, and the allies were able to drive jeeps right into the outskirts of Rome unchallenged. But that element of surprise was lost when Allied commander General John Lucas decided to delay the march on Rome until he had consolidated his position on the beaches, a position that was surrounded by high ground. The Germans used the delay to throw everything they had into the high ground and the allies were pinned down in a bloody battle. As a result, it took four months for the allies to fight their way inland.

39. Hookups on “House” : IVS
I think that “House” is one of the better shows made by Fox television. It is fun for me to see English actor Hugh Laurie in the title role as coming from the other side of the Atlantic I have been watching him in various comedic roles for decades. Famously he played Bertie Wooster opposite Stephen Fry in P.G. Wodehouse’s “Jeeves & Wooster”, as well as one of the bumbling “bad guys” in “101 Dalmatians” (the version starring Glenn Close).

45. Like venison : LEAN
“Venison” is the meat of a deer. In days of yore, the term applied not just to deer, but to any large game. The word “venison” ultimately derives from the Latin “venare” meaning “to hunt”.

48. Hindu embodiment of virtue : RAMA
In the Hindu tradition, the god known as Vishnu has seven different avatars i.e. incarnations or manifestations. Rama is the seventh of these avatars.

49. Procedure improving one’s looks? : LASIK
LASIK surgery uses a laser to reshape the cornea of the eye to improve vision. The LASIK acronym stands for “laser-assisted in situ keratomileusis”.

54. Some small tablets : IPAD MINIS
The iPad mini is line of smaller iPads that was introduced by Apple in 2012. The iPad mini has a screen size of 7.9 inches, whereas the regular iPad’s screen is 9.7 inches.

58. Something to believe in : TENET
A tenet is an article of faith, something that is held to be true. “Tenet” is Latin for “he holds”.

Down
2. Holders of thoughts? : CRANIA
The human skull is made up of two parts: the cranium (which encloses the brain) and the mandible (or “jawbone”).

3. Order back : REMAND
“To remand” is to send back. In the law, the term can mean to send back into custody, or to send back a case to a lower court.

6. She anchored “Weekend Update” with Tina, then Seth : AMY
Amy Poehler was a cast member on “Saturday Night Live” from 2001 to 2008, notable for appearing in many great sketches, including those where she played Hillary Clinton opposite Tina Fey’s Sarah Palin. Poehler also starred with Fey in the 2008 movie “Baby Mama”. And, Poehler led the cast of the sitcom “Parks and Recreation” for its seven-season run.

“Weekend Update” is the longest-running of any recurring sketch on “Saturday Night Live”. In fact, the segment made its debut on the very first show, back in 1975. The first “anchor” at the “Weekend Update” was Chevy Chase.

8. “Bathers at Asnières” and “Parade de Cirque” : SEURATS
Georges Seurat was a French Post-Impressionist. His most famous work, in the pointillist style, can be viewed in the Art Institute of Chicago, “A Sunday Afternoon on the Island of La Grande Jatte – 1884”. If you’ve seen the movie “Ferris Bueller’s Day Off”, it features quite prominently in a wonderful, wonderful scene shot at the gallery.

10. 24-book classic : ILIAD
“The Iliad” is an epic poem by the Greek poet Homer, which tells the story of the ten-year siege of Ilium (also known as Troy) during the Trojan war. “The Odyssey”, also attributed to Homer, is sometimes described as a sequel to “The Iliad”.

11. What a troll may perpetuate : FLAME WAR
“To flame” is an informal term used in Internet circles and means “to inflame”, to incite anger, to make insulting criticisms or remarks.

In Internet terms, a “troll” is someone who attempts to disrupt online group activities. The fishing term “troll” is used to describe such a person, as he or she throws out off-topic remarks in an attempt to “lure” others into some emotional response.

12. Preceder of the sound of a gavel : FINAL BID
A gavel is a small hammer that one raps on a table or desk to call a meeting to order, or perhaps to signify a sale at an auction.

15. Biggest rival of US Foods : SYSCO
It’s hard to drive down any highway in the US without coming across a Sysco truck. It really is a huge company, the largest food service enterprise in the country. “Sysco” is an abbreviation for Systems and Services Company.

24. Year-end tradition since 1966 : KWANZAA
Kwanzaa is a celebration of African heritage that lasts from December 26 to January 1 annually. The holiday was introduced in 1966 as an alternative to the existing holidays at the end of the year. The name comes from the Swahili phrase “matunda ya kwanza”, meaning “first fruits of the harvest”.

27. Half of a 2000s stoner-film duo : KUMAR
“Harold & Kumar” is a trilogy of comedy films about two potheads played by John Cho (Harold) and Kal Penn (Kumar). Not my cup of tea …

30. Alternative to Flix : TMC
The Movie Channel is owned by Showtime, which in turn is subsidiary of CBS. The channel’s name is often abbreviated to “TMC”, although this is informal usage.

32. Kung ___ beef : PAO
Sichuan (also Szechuan) is a province in southwest China. Sichuan is noted for its cuisine, which is hot and spicy as it uses plenty of garlic, chili peppers and the Sichuan peppercorn. A famous Szechuan dish in the US is Kung Pao chicken or shrimp.

41. Charley Bates’s mentor, in literature : FAGIN
Fagin is the colorful antagonist in the Charles Dickens novel “Oliver Twist”. Fagin leads a band of children who earn their keep by picking pockets and committing other petty crimes. Fagin’s most successful pickpocket is the Artful Dodger.

42. Musical with the song “There’s a Sucker Born Ev’ry Minute” : BARNUM
The musical “Barnum” is based on the life of the showman P. T. Barnum. Given Barnum’s profession, the musical is unusual in that it prominently features entertaining circus acts. The original Broadway production opened in 1980.

43. One often accused of being blind : UMPIRE
Back in the 15th century, “an umpire” was referred to as “a noumpere”, which was misheard and hence causing the dropping of the initial letter N. The term “noumpere” came for Old French “nonper” meaning “not even, odd number”. The idea was that the original umpire was a third person called on to arbitrate between two, providing that “odd number” needed to decide the dispute.

48. First lady Barbara’s Russian counterpart : RAISA
Raisa Gorbachova was the wife of Soviet leader Mikhail Gorbachev. There’s no doubt that Raisa’s charm and personality helped her husband as he worked to change the image of the Soviet Union.

Barbara Bush (nee Pierce) is the wife of former President George H. W. Bush. The couple met at a Christmas dance in Andover, Massachusetts when Barbara was 16 years old. They married four years later in 1945 while the future president was home on leave from the US Navy. George Bush was torpedo bomber pilot who flew 58 combat missions during WWII.

50. Last name in the funnies for nearly 50 years : KETT
“Etta Kett” was a comic strip that first ran in 1925. The strip ceased to be published in 1974, when creator Paul Robinson passed away. The initial intent was to offer tips to teenagers on manners and social graces, hence the name of the title character Etta Kett (sounds like “etiquette”).