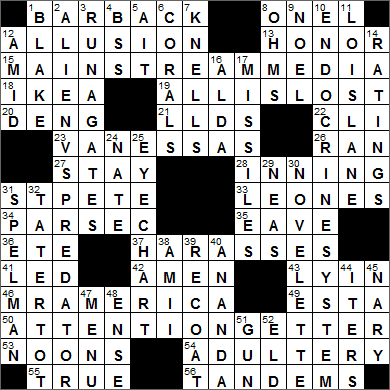 Today’s Wiki-est, Amazonian Googlies
Across
1. Tavern assistant : BAR-BACK
A bartender’s assistant is known as a “bar-back”. The tasks performed by a bar-back include stocking the bar with beer, liquor, ice, garnishes and glassware. Although the legal drinking age is 21 in the US, bar-backs (and bartenders) can be as young as 18 in some locations.

8. Person typically taking Torts and Contracts : ONE L
“One L” is a name used in general for first year law students.

18. Retail giant whose catalog comes in 17 languages : IKEA
The furniture chain IKEA was founded by Ingvar Kamprad in 1943, when he was just 17-years-old. IKEA is an acronym that stands for Ingvar Kamprad Elmtaryd Agunnaryd (don’t forget now!). Elmtaryd was the name of the farm where Ingvar Kamprad grew up, and Agunnaryd is his home parish in Sweden.

20. Wendi ___, ex-wife of Rupert Murdoch : DENG
Wendi Deng is an American businesswoman who was born in Jinan, China. Deng met Rupert Murdoch at a party in Hong Kong in 1997, and he became her second husband in 1999, a few weeks after Murdoch’s divorce came through from his second wife. Former UK Prime Minister Tony Blair is godfather to one of the children Murdoch had with Deng. Murdoch ended his relationship with Blair after suspecting that Blair and Deng had an affair.

21. Parts of some law profs.’ résumés : LLDS
The honorary degree of Legum Doctor (LL.D.) translates from the Latin as Doctor of Laws, a plural. This practice of using the plural originated in Cambridge University in England, as one was awarded an LL.D. after having been taught both Canon Law and Civil Law.

22. Year in the reign of Antoninus Pius : CLI
Antoninus Pius was Roman Emperor from 138 to 161, succeeding his adopted father Hadrian.

23. Hudgens and Huxtable : VANESSAS
Vanessa Hudgens is an actress who made her name playing Gabriella Montez in the “High School Musical” series of films. More recently, Hudgens played the title role in the musical “Gigi” on Broadway.

Vanessa Huxtable is a character on “The Cosby Show”, the fourth child of Cliff and Clair Huxtable. Vanessa is played by Tempestt Bledsoe.

26. Skedaddled : RAN
27. Not skedaddle : STAY
“Skedaddle ” is a slang term meaning “run away” that dates back to the Civil War.

31. One end of Fla.’s Sunshine Skyway Bridge : ST PETE
The Sunshine Skyway Bridge spans Tampa Bay in Florida, and is just over four miles long. The current bridge opened in 1987, replacing a prior structure that opened in 1954. Part of the old bridge collapsed in 1980 when a freighter called the MV summit Venture collided with a pier. The collision caused 35 deaths as six cars, a truck and a Greyhound bus fell 150 feet into the water.

33. Currency of West Africa : LEONES
Leones are the currency of Sierra Leone. The Leone was introduced in 1964 to replace the British West African pound. The move was a practical one, as the Leone is a decimal currency and replaces the old British system of pounds, shillings and pence.

34. About 3 1/4 light-years : PARSEC
A parsec is a measure of length or distance used in astronomy. One parsec is equal to about 19.2 trillion miles.

A light-year (lt. yr.) is a measure of distance, not time. It is the distance that light travels in a vacuum in one year. The accepted abbreviation for a light-year is “ly”. A light-second is a lot shorter distance: about 186,282 miles.

35. Ice dam locale : EAVE
Ice dams are buildups of ice along the edge of a roof. The term “dam” is used because the ice can trap water on the roof as snow melts or rain falls. That “dammed” water might get under the shingles and inside the house.

41. Kind of bulb, for short : LED
A Light Emitting Diode (LED) is a specialized form of semiconductor that when switched on releases photons (light). LEDs were used in early digital watches, and are getting more and more popular even though their use in electronic equipment is fading away. LEDs are used now as a replacement for the much less efficient tungsten light bulb. I replaced all of my tungsten Xmas lights a few years ago and saved a lot on my electricity bill.

53. Hot times? : NOONS
Our word “noon”, meaning “midday”, comes from the Latin “nona hora” that translates as “ninth hour”. Back in Ancient Rome, the “ninth hour” was three in the afternoon. Over the centuries, traditions such as church prayers and “midday” meals shifted from 3 p.m. to 12 p.m., and so “noon” became understood as 12 noon.

54. “The application of democracy to love,” per H. L. Mencken : ADULTERY
H. L. Mencken was a journalist and essayist from Baltimore. Mencken reported on the Scopes trial of 1925 and was the writer who dubbed it the “Monkey Trial”.

Down
1. Poet who wrote “Tyger! Tyger! burning bright” : BLAKE
William Blake was an English poet and artist, considered now have been a powerful force in his fields during the Romantic Age. One of Blake’s more famous poems is “The Tyger”, which has the celebrated lines:

2. Hit 2004 sci-fi film with a 2007 sequel : ALIEN VS PREDATOR
“Alien vs. Predator” is a whole franchise of movies and video games built around a 2004 film. The movie itself had its roots in the earlier features “Alien” (excellent!) and “Predator” (awful!).

3. Fugitives : RUNAGATES
A “runagate” is a fugitive or runaway, or perhaps a wanderer or vagabond. The term is a corruption of “renegade”, with the influence of “run” and “agate”. “Agate” means “one the way, agoing”.

5. Part of the conjugation for “avoir” : AIT
“Avoir” is French for “to have”. “Ait” is the third person singular form of “avoir” in the subjunctive tense. Got that …?

6. Aquarium decorations : CORALS
Corals are invertebrates found in the sea that live in compact colonies. Some corals secrete calcium carbonate to form a hard exoskeleton, and these type of corals make up the basic infrastructure of coral reefs.

7. Sounds of doom, maybe : KNELLS
The word “knell” is used for a solemn ring from a bell, often associated with death or a funeral. “Knell” comes the Old English “cnell” and is probably imitative in origin, sounding like a peal from a large bell.

8. ___ law : OHM’S
The unit of electrical resistance is the ohm (with the symbol omega) named after German physicist Georg Simon Ohm. Ohm was the guy who established experimentally that the amount of current flowing through a circuit is directly proportional to the voltage applied, (V=IR) a relationship that every schoolkid knows as Ohm’s Law.

9. Word sung four times before “Born is the King of Israel” : NOEL

11. Female Action Comics character : LOIS LANE
Lois Lane has been the love interest of Superman/Clark Kent since the comic series was first published in 1938. Lois and Clark both work for the big newspaper in the city of Metropolis called “The Daily Planet”. The couple finally got hitched in the comics (and on television’s “Lois and Clark”) in 1996. But never mind all that … one has to wonder how challenging the crossword is in “The Daily Planet” …

16. Oscar-nominated actor for “The Aviator” : ALDA
Alan Alda has had a great television career, especially of course on “M*A*S*H”. Alda won his first Emmy in 1972, for playing Hawkeye Pierce on “M*A*S*H”. He won his most recent Emmy in 2006 for his portrayal of Presidential candidate Arnold Vinick in “The West Wing”. When it comes to the big screen, my favorite of Alda’s movies is the 1978 romantic comedy “Same Time, Next Year” in which he starred opposite Ellen Burstyn.

24. “Big” comics character : NATE
“Big Nate” is a comic stirp that was launched in 1991, written and illustrated by Lincoln Peirce. The hero of the strip is a rebellious sixth-grader named Nate Wright.

25. Where you may need to read the fine print : EYE CHART
The commonly used eye chart (that starts with the letters “E FP TOZ LPED”) is called a Snellen chart. The test is named after its developer Herman Snellen, who introduced it way back in 1862.

30. Isaac Asimov’s “The Bicentennial Man,” e.g. : NOVELETTE
Isaac Asimov was a wonderful science fiction writer, and a professor of biochemistry. He was a favorite author as I was growing up and I must admit that some hero worship on my part led me to study and work as a biochemist for a short while early in my career. My favorite of his works is the collection of short stories called “I, Robot”. Asimov wrote three autobiographies, the last of which was called “I, Asimov”, which was published in 1994, two years after his death.

31. Atlanta women’s college : SPELMAN
Spelman College is a women’s college in Atlanta, Georgia that was founded as the Atlanta Baptist Female Seminary in 1881. Spelman is part of the Atlanta University Center, along with the nearby all-male Morehouse College, with which Spelman has a long-standing relationship.

32. Food item cooked “to a light golden color” : TATER TOT
Ore-Ida’s founders came up with the idea for Tater Tots when they were deciding what to do with residual cuts of potato. They chopped up the leftovers, added flour and seasoning, and extruded the mix through a large hole making a sausage that they cut into small cylinders. We eat 70 million pounds of this extruded potato every year!

38. ___ Stewart, singer of the 1979 #1 hit “Knock on Wood” : AMII
“Knock on Wood” is a song composed in 1966 by Eddie Floyd and Steve Cropper, and recorded that same year by Floyd. The most famous cover of “Knock on Wood” is disco version released by Amii Stewart in 1979 that reached number one in the US charts.

40. One of Buddha’s 10 disciples : ANANDA
The main disciples of Gautama Buddha were known as the ten principal disciples. Included in the group were the Buddha’s only son Rahula, and the Buddha’s cousins Ananda and Anuruddha.

The expression “all roads lead to Rome” is used to mean “whatever way we do this, we’ll get the same result”. The phrase has been used since the 1100s and probably even earlier than that. The expression arises because the ancient Roman road system had all major roads radiating from Rome like spokes on a wheel.

48. Start of Massachusetts’ motto : ENSE
The motto of the Commonwealth of Massachusetts is “Ense petit placidam sub libertate quietem”, a Latin phrase that can be translated as “By the sword we seek peace, but peace only under liberty”. The quotation is from a passage written by English politician Algernon Sidney who was executed for treason by King Charles II.