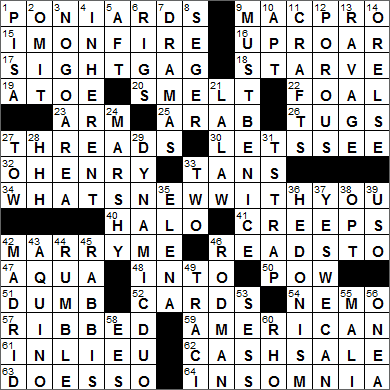 Today’s Wiki-est, Amazonian Googlies
Across
1. Small, slim daggers : PONIARDS
A “poignard” (also “poniard”) is a long and light thrusting knife that was worn by knights of old.

9. Apple variety : MAC PRO
The Mac Pro is the most powerful line of computers made by Apple. The level below the Mac Pro is the iMac, Apple’s all-in-one line of desktops that is most popular. The Mac Mini is Apple’s least powerful desktop, and the smallest. The Mini uses mainly laptop components.

17. Many a Harpo Marx joke : SIGHT GAG
Harpo Marx was the second oldest of the Marx brothers. Harpo’s real name was Adolph, and he earned his nickname because he played the harp. Famously he didn’t speak on screen, a routine he developed after reading a review that he performed really well when he just didn’t speak!

20. Get the lead out? : SMELT
Metals are found in ore in the form of oxides. In order to get pure metal from the ore, the ore is heated and the metal oxides within are reduced (i.e. the oxygen is removed) in the chemical process known as smelting. The oxygen is extracted by adding a source of carbon or carbon monoxide which uses up the excess oxygen atoms to make carbon dioxide, a waste product of smelting (and of course, a greenhouse gas).

Poor little foal of an oppressèd race!
I love the languid patience of thy face:
And oft with gentle hand I give thee bread,
And clap thy ragged coat, and pat thy head.
But what thy dulled spirits hath dismayed,
That never thou dost sport along the glade?
And (most unlike the nature of things young)
That earthward still thy moveless head is hung?
Do thy prophetic fears anticipate,
Meek Child of Misery! thy future fate?
The starving meal, and all the thousand aches
“Which patient Merit of the Unworthy takes”?
Or is thy sad heart thrilled with filial pain
To see thy wretched mother’s shortened chain?
And truly, very piteous is her lot —
Chained to a log within a narrow spot,
Where the close-eaten grass is scarcely seen,
While sweet around her waves the tempting green!

25. Like Egypt : ARAB
The official name of the nation that we tend to refer to as “Egypt” is the “Arab Republic of Egypt”. Most of Egypt lies in North Africa, but the Sinai is located in Asia.

27. They’re followed on message boards : THREADS
On an Internet forum, newsgroup, or bulletin board, comments and replies can be grouped in conversation “threads”.

32. Writer who gave his name to an annual award : O. HENRY
O. Henry was the pen name of writer William Sydney Porter from Greensboro, North Carolina. O. Henry is famous for his witty short stories that have a clever twist in the tail.

47. Color of McCartney’s “Sgt. Pepper” uniform : AQUA
Sgt. Pepper’s Lonely Heart Club Band was the alter-ego of the Beatles and was the title of a famous studio album released in 1967.

52. Sharp’s handful : CARDS
A “card sharp” is someone who is skilled and deceptive with playing cards, particularly when playing gambling games like poker. It seems that the term “card sharp” predates the related “card shark”, both of which have the same meaning.

54. Captain of fiction : NEMO
In the 1954 movie version of “20,000 Leagues Under the Sea”, Captain Nemo goes down with his ship. In the novel by Jules Verne the fate of Nemo and his crew isn’t quite so cut and dry, although the inference is perhaps that they did indeed head for Davy Jones’ Locker.

64. A good cure for it is sleep, per W. C. Fields : INSOMNIA
W. C. Fields worked hard to develop the on-screen image of a pretty grumpy old man. In his real life he was fairly grumpy too, and fond of protecting his privacy. He was famous for hiding in the shrubs around his house in Los Angeles and firing a BB gun at the legs of tourists who intruded on his property. Also Fields often played the drunk on-screen. In real life, Fields didn’t touch alcohol at all when he was younger, partly because he didn’t want to do anything to impair his skill as a juggler. But later in life he took to heavy drinking, so much so that it affected his health and interfered with his ability to perform.

Down
1. Where Fermi studied : PISA
Enrico Fermi was born in Rome, Italy. Fermi moved to the US just before WWII, largely to escape the anti-Semitic feelings that were developing in Italy under Mussolini. It was Fermi’s work at the University of Chicago that led to the construction of the world’s first nuclear reactor. Fermi died at 53 years of age from stomach cancer . Cancer was a prevalent cause of death among the team working on that first nuclear pile.

8. Rocker with the 1976 album “Live Bullet” : SEGER
Bob Seger struggled as a performing artist right through the sixties and early seventies before becoming a commercial success in 1976 with the release of his album “Night Moves”. Since then, Seger has recorded songs that have become classics like, “We’ve Got Tonight” and “Old Time Rock & Roll”.

21. Show title shown on a license plate : LA LAW
“L.A. Law” ran on NBC from 1986 to 1994, and was one of the network’s most successful drama series. It took over from the equally successful “Hill Street Blues” in the Thursday night 10 p.m. slot until, after a six-year run, it was itself replaced by yet another respected drama, “E.R.” The opening credits showed that famous California licence plate. The plate was on a Jaguar XJ for most of the series, but moved onto a Bentley towards the end of the run. For each series the registration sticker was updated, so no laws were being broken.

24. Like much of the Everglades : MARSHY
The Everglades are a tropical wetlands that cover much of southern Florida. The area was named “River Glades” by a British surveyor in 1773, and is suggested that poor transcription of the word “river” led to the use of “ever”. The southern 20% of the Everglades is a protected region that we know as Everglades National Park. The park is the third largest National Park in the lower 48 states, after Death Valley NP (the largest) and Yellowstone NP.

28. Primary loser to J.F.K. in 1960 : HHH
Hubert Horatio Humphrey (HHH) was the running mate of President Lyndon Johnson in the 1964 presidential campaign. Humphrey was sworn in as Vice President in 1965, the 38th person to hold the office. Humphrey was the Democratic candidate for president in the 1968 election, but lost to Richard Nixon.

29. Longtime nickname in comics : DYNAMIC DUO
Batman and Robin are unique among their superhero compatriots in that they have no special powers, just a whole load of cool gadgets. Batman is sometimes referred to as the Caped Crusader, Robin as the Boy Wonder, and the pair as the Dynamic Duo.

33. First word of Frost’s “The Road Not Taken” : TWO
Robert Frost had a poem published in 1916 in which he describes the road he took in the last lines:

I took the one less traveled by,
And that has made all the difference.

Because of these last lines, the poem is often assumed to be titled “The Road Less Traveled”. In fact, the poem’s correct name is “The Road not Taken”. Quite interesting …

35. “Neapolitan Novels” author Ferrante : ELENA
Elena Ferrante is an Italian author, best known for her 4-part series known as the “Neapolitan Novels”. What is very interesting about “Ferrante” is that the moniker is a pseudonym, and no one seems to know the author’s real name. There is some speculation that “Elena” is in fact a man.

36. Pleasure principle : HEDONISM
A hedonist is someone who seeks to maximise the amount of pleasure in his or her life. “Hedone” is the Greek word for “pleasure”.

37. Frequent chant in 2008 : YES WE CAN!
The 2008 campaign that resulted in the election of President Barack Obama used the slogan “Change we can believe in”, along with the associated chant “Yes We Can”. The words “Yes We Can” were perhaps borrowed from the United Farm Workers, which organization uses the motto “Sí, se puede”. “Sí, se puede” translates as “Yes, it is possible” and is a phrase very much associated with labor leader Cesar Chavez.

39. Grp. doing private shows? : USO
The United Service Organization (USO) was founded in 1941 at the request of FDR “to handle the on-leave recreation of the men in the armed forces”. A USO tour is undertaken by a troupe of entertainers, many of whom are big-name celebrities. A USO tour usually includes troop locations in combat zones.

43. Mother-or-son Philippine president : AQUINO
Corazon Aquino was the first woman to hold the office of President of the Philippines. She led the popular revolt against President Ferdinand Marcos in 1986 which led to the restoration of democracy in the country. She came to lead the movement against Marcos upon the assassination of her husband, the most visible opponent of Marcos. She took to the role reluctantly, proclaiming herself a “plain housewife”.

Benigno Aquino III became President of the Philippines in 2010. He is the third son of former President Corazon Aquino.

46. Hall-of-Fame N.B.A. player known as “The Worm” : RODMAN
Retired professional basketball player Dennis Rodman was quite the character on the court, and made a big splash off the court too (and still is!). Famously, Rodman had an affair with the singer Madonna, was married for a while to Carmen Electra, and turned out in a wedding dress to promote his autobiography!

49. One of the singing Braxton sisters : TRACI
The Braxton Family singers are sisters Toni, Traci, Towanda, Trina and Tamar.

55. Where Bambara is widely spoken : MALI
The Republic of Mali is a landlocked country in western Africa, south of Algeria. The country’s most famous city is … Timbuktu …

56. Fit for service : ONE-A
The US government maintains information on all males who are potentially subject to military conscription, using what is called the Selective Service System(SS). In the event that a draft was held, men registered would be classified into groups to determine eligibility for service. Class 1-A registrants are those available for unrestricted military service. Other classes are 1-A-O (conscientious objector available for noncombatant service), 4-A (registrant who has completed military service) and 4-D (Minister of religion).

60. Symbol of charge density : RHO
Rho is the Greek letter that looks just like our Roman letter “p”. Rho is the symbol used for density, i.e. mass/volume.