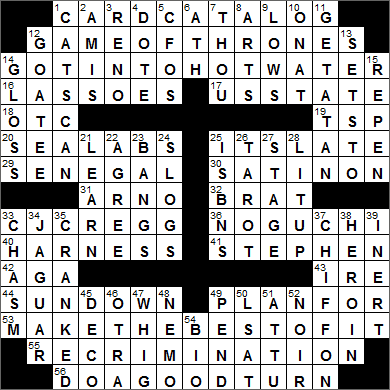 Today’s Wiki-est, Amazonian Googlies
Across
12. Show with the record for most Emmys won in a single year (12) : GAME OF THRONES
HBO’s “Game of Thrones” is a fantasy television drama that is adapted from a series of novels by George R. R. Martin called “A Song of Ice and Fire”. “Game of Thrones” is actually made in and around Belfast, Northern Ireland.

17. What a star may represent : US STATE
Legend has it that Betsy Ross made the first American flag for General George Washington. However, this story only surfaced during the centennial celebrations of 1876, and although Betsy Ross was indeed one of several flag makers in Philadelphia in the days of George Washington, sadly there’s no definitive evidence that Ross provided that first Stars and Stripes.

20. Locales for deep investigations? : SEALABS
SEALAB I, II and II were man-made habitats built by the US Navy designed to advance the technology needed for humans to live and work underwater for extended periods. SEALAB I was lowered to a depth of just under 200 feet off the coast of Bermuda in 1964. Four divers stayed in SEALAB for 11 days, before the experiment was halted due to the approach of a tropical storm.

29. Home to the naturally pink Lake Retba : SENEGAL
The Republic of Senegal is a country on the far western coast of Africa. For many years Senegal was a French colony, gaining independence in 1960. The capital of Senegal is Dakar, a city located on the Cap-Vert Peninsula that juts out into the Atlantic Ocean.

Lake Retba in Senegal is located just outside the capital city of Dakar. It is also named “Lac Rose” (“Pink Lake” in French), a reference to the water’s pink color caused by a red pigment that is produced by algae.

41. Big name in late-night : STEPHEN
Stephen Colbert is a political satirist who hosts his own show on Comedy Central, “The Colbert Report”. Colbert’s first love was theater, and so he studied to become an actor. He then moved into comedy, and ended up on the “The Daily Show with Jon Stewart”. He left “The Daily Show” in 2005 to set up his own spinoff, “The Colbert Report”. In his own inimitable way, Colbert likes to use a “French” pronunciation for the name of his show, so “The Colbert Report” comes out as “The Col-bear Rep-oar”. Colbert will be taking over the “Late Show” when David Letterman retires.

42. Topkapi Palace resident : AGA
The magnificent Topkapi Palace in Istanbul was a residence for the Ottoman sultans for over 400 years, starting in 1459. During its heydey, the palace complex was home to a staggering 4,000 people. The name “Topkapi” translates as “Cannon Gate”.

43. Choler : IRE
“Choler” is “anger, irritability”. Choler (also “cholera”) was one of the body’s four basic substances, the so-called four humors. All diseases were caused by these four substances getting out of balance. The four humors were:

Down
1. M.R.I. alternative : CAT SCAN
A CT (or “CAT”) scan produces (via computer manipulation) a three dimensional image of the inside of an object, usually the human body. It does so by taking a series of two dimensional x-ray images while rotating the camera around the patient. The issue with CT scans is that they use x-rays, and high doses of radiation can be harmful causing damage that is cumulative over time.

2. “The Zone of Interest” author, 2014 : AMIS
I suppose the successful English novelist Martin Amis must have writing in his blood. He is the son of the respected author Kingsley Amis, a Booker Prize winner. Martin Amis’s best-known novels are his so-called “London Trilogy” consisting of “Money” (1984), “London Fields” (1989) and “The Information” (1995).

“The Zone of Interest” is a 2014 novel by Martin Amis that is set in WWII, in the Auschwitz concentration camp. It’s about a Nazi officer who falls for the wife of the camp commandant.

3. Seat of Washoe County : RENO
Reno, Nevada was named in honor of Major General Jesse Lee Reno, a Union officer killed in the Civil War. The city has a famous “Reno Arch”, a structure that stands over the main street. The arch was erected in 1926 to promote an exposition planned for the following year. After the expo, the city council decided to keep the arch and held a competition to decide what wording should be displayed, and the winner was “The Biggest Little City in the World”.

5. Some successful Wharton grads, for short : CFOS
Wharton is the business school of the University of Pennsylvania, in Philadelphia. The school was established in 1881 largely due to a donation from industrialist Joseph Wharton, co-founder of Bethlehem Steel.

12. Relative of a soul patch : GOATEE
A goatee is a beard formed by hair on just a man’s chin. The name probably comes from the tuft of hair seen on an adult goat.

A “soul patch” is that small patch of facial hair worn especially by jazz musician, located just below the lower lip and above the chin. The actor and comedian Howie Mandel has been sporting a soul patch for many years, I believe.

23. Mamie Eisenhower hairstyle : BANGS
Mamie Eisenhower has to have been one of the most charming of all the First Ladies of the United States. Ms. Eisenhower suffered from an inner ear complaint called Ménière’s disease which caused her to lose her balance quite often. Because she was unsteady on her feet there were unfounded rumors floating around Washington that Ms. Eisenhower had a drinking problem. People can be very unkind …

25. Info in a 1-Across : ISBNS
(1A. Holder of many titles : CARD CATALOG)
The International Standard Book Number (ISBN) was invented by one Gordon Foster who is now a professor at Trinity College Dublin in Ireland. The code was originally developed for booksellers, so that they had a unique number (and now a barcode) for each publication.

26. Means of divination : TAROT
Tarot cards have been around since the mid-1400s, and for centuries were simply used for entertainment as a game. It has only been since the late 1800s that the cards have been used by fortune tellers to predict the future. The list of tarot cards includes the Wheel of Fortune, the Hanged Man and the Lovers.

34. Luxury car name since 1935 : JAGUAR
Jaguar started out as a manufacturer of sidecars for motorcycles back in 1922, when the company was known as the Swallow Sidecar Company (SS for short). The company changed its name to Jaguar after WWII, because of the unfortunate connotations of the letters “SS” in that era (i.e. the Nazi paramilitary organization).

37. Lingerie material : CHIFFON
Chiffon is a sheer fabric usually made from silk, cotton, nylon or rayon. The French word “chiffon” is a diminutive of “chiffe” meaning “rag, piece of cloth”.

38. Speedball component : HEROIN
A speedball is a intravenous mix of cocaine and heroin or morphine. The list of celebrities that have died from speedball use includes John Belushi, Chris Farley, Philip Seymour Hoffman and River Phoenix.

47. Clay, for one : WHIG
The Whig Party (in the US) was active from 1833 to 1856, and was the opposition party to the Democrats at that time. One of the tenets of the Whig Party was the supremacy of Congress over the Executive branch. Prominent members of the party included Presidents Zachary Taylor and John Tyler. Abraham Lincoln was also a Whig while he served a two-year term as a US Representative for the state of Illinois. By the time he became President, Lincoln was a member of the Republican Party.

Henry Clay was a statesman from Kentucky well known for his gift as an orator. He was very persuasive in his arguments in favor of war with Britain resulting in the War of 1812. In 1957, a Senate committee chaired by John F. Kennedy declared Henry Clay one of the five greatest senators in American history.

48. Friend of Bubbles, in an animated film : NEMO
“Finding Nemo” is a 2003 animated blockbuster from Pixar. The film was the winner of the Oscar that year for Best Animated Feature. Believe it or not, “Finding Nemo” is the best-selling DVD of all time and, until 2010’s “Toy Story 3”, it was the highest-grossing, G-rated movie at the box office.

50. Focus of some prep books : LSAT
The Law School Admission Test (LSAT) has been around since 1948.

51. Battle of ___ (1943 U.S./Japanese conflict) : ATTU
Attu is the westernmost island in the Aleutian chain, and so is the westernmost part of Alaska. Japanese forces took the island in October 1942, eventually landing as many as 2,900 soldiers there. In May 1943, the US Army retook the island in twenty days of fighting that is now called the Battle of Attu, the only land battle to take place on US soil during WWII. I am very proud of my father-in-law, who served in the Aleutians in WWII …

52. Rouge alternative : NOIR
In the game of roulette, players can bet on red (rouge) and black (noir).