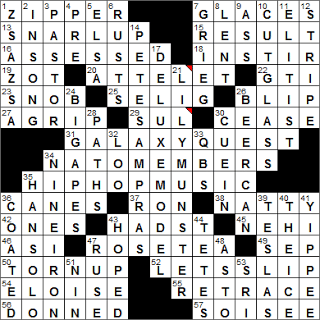 Today’s Wiki-est, Amazonian Googlies
Across
1. Case closer : ZIPPER
What we know today as a “zipper” was invented by mechanical engineer Whitcomb Judson in 1890, when it was called a “clasp locker”. The device was introduced at the 1893 Chicago World’s Fair, but was not successful. Several people made improvements to the basic design over the coming decades. By the 1920s, the B. F. Goodrich Company was using the device on a line of rubber boots. It was Goodrich who introduced us to the name “zipper”.

7. French frozen desserts : GLACES
“Glace” is the French word for “ice-cream” (and also for “ice”).

18. Doing time : IN STIR
The slang word “stir”, meaning a prison, probably has its roots in Start Newgate prison in London, where it was a nickname for the establishment.

19. Sound effect in the comic “B.C.” : ZOT
“B.C.” is a comic strip that was drawn by Johnny Hart, and now since Hart’s passing, is produced by his grandson. Hart introduced “B.C.” in 1958. One of the non-human characters in the strip is the Anteater, who sucks up ants with his sticky tongue making a “ZOT” sound. Hart’s Anteater is the inspiration for Peter the Anteater, the team mascot for UC Irvine. Johnny Hart’s other famous comic strip is the brilliant “The Wizard of Id”.

20. Decorative skewer for serving hors d’oeuvres : ATTELET
An “attelet” is a device comprising a thin skewer with an elaborate decorative top, usually made of gold- or silver-plated metal. The term “attelet” is French in origin, and is probably ultimately derived from “hasta”, the Latin for “spear”.

22. VW Golf hatchback : GTI
The Volkswagen Rabbit is a small, front-wheel drive car that is sold as the Volkswagen Golf outside of North America. There is a very popular GTI version of the Golf that was introduced in 1976. The initialism “GTI” stands for Grand Tourer Injection.

23. 11-Down sort : SNOB
(11D. High-and-mighty : ELITIST)
Back in the 1780s, a “snob” was a shoemaker or a shoemaker’s apprentice. By the end of the 18th century the word was being used by students at Cambridge University in England to refer to all local merchants and people of the town. The term evolved to mean one who copies those who are his or her social superior (and not in a good way). From there it wasn’t a big leap for “snob” to include anyone who emphasized their superior social standing and not just those who aspired to rank. Nowadays a snob is anyone who looks down on those considered to be of inferior standing.

25. Manfred succeeded him as baseball commissioner in 2015 : SELIG
Bud Selig was the Commissioner of Baseball for Major League Baseball from 1998 to 2015. Selig became acting commissioner in 1992 after the resignation of Fay Vincent. The team owners searched for a new commissioner for six years, and finally gave the permanent job to Selig in 1998.

Rob Manfred took over as Commissioner of Baseball in 2015. Manfred had started working with Major League Baseball in 1987, and headed up the 2013 investigation into the use of performance enhancing drugs supplied by the rejuvenation clinic Biogenesis.

26. Spot at an airport : BLIP
Scientists have been using radio waves to detect the presence of objects since the late 1800s, but it was the demands of WWII that accelerated the practical application of the technology. The British called their system RDF standing for Range and Direction Finding. The system used by the US Navy was called Radio Detection And Ranging, which was shortened to the acronym RADAR.

34. What 28 states are : NATO MEMBERS
The North Atlantic Treaty Organization (NATO) was founded not long after WWII in 1949 and is headquartered in Brussels, Belgium. The first NATO Secretary General was Lord Ismay, Winston Churchill’s chief military assistant during WWII. Famously, Lord Ismay said the goal of NATO was “to keep the Russians out, the Americans in, and the Germans down.”

37. N.F.L. coach Rivera : RON
Coach and former football player Ron Rivera played for the California Golden Bears while at school, before turning professional with the Chicago Bears. Rivera took over as head coach with the Carolina Panthers in 2011.

42. Capital of Washington? : ONES
The US’s first president, George Washington, is on the one-dollar bills produced today. However, when the first one-dollar bill was issued in 1863, it featured a portrait of Salmon P. Chase, President Abraham Lincoln’s Secretary of the Treasury.

43. “___ thou no poison mix’d …?”: “Romeo and Juliet” : HAD’ST
William Shakespeare’s “Romeo and Juliet” doesn’t end well for the title characters. Juliet takes a potion as a ruse to fool her parents, to trick them into thinking she is dead. The potion puts her in a death-like coma for 24 hours, after which Juliet plans to awaken and run off with Romeo. Juliet’s sends a message to Romeo apprising him of the plan, but the message fails to arrive. Romeo hears of Juliet’s “death”, and grief-stricken he takes his own life by drinking poison. Juliet awakens from the coma, only to find her lover dead beside her. She picks up a dagger and commits suicide. And nobody lives happily ever after …

45. ___ Bottling Company (Cleveland fixture for over 85 years) : NEHI
The brand of Nehi cola has a name that sounds like “knee-high”, a measure of a small stature. Back in the mid-1900’s the Chero-Cola company, which owned the brand, went for a slightly different twist on “knee-high” in advertising. The logo for Nehi was an image of a seated woman’s stockinged legs, with her skirt pulled up to her knees, to hint at “knee-high”.

54. Title brat of kid-lit : ELOISE
Kay Thompson wrote the “Eloise” series of children’s books. Kay Thompson actually lived at the Plaza Hotel in New York, the setting she would choose for her “Eloise” stories. Eloise started out as a hit song for Thompson, a success that she parlayed into the book franchise.

56. Opposite of took off : DONNED
One doffs one’s hat, usually as a mark of respect. To doff is to take off, with “doff” being a contraction of “do off”. The opposite of “doff” is “don” meaning “to put on”.

Down
1. Miss Hungary of 1936, familiarly : ZSA ZSA
Zsa Zsa Gabor is a Hungarian American actress, born in Budapest as Sári Gábor (the older sister of the actress Eva). Zsa Zsa Gabor has been married a whopping nine times, including a 5-year stint with Conrad Hilton and another 5 years with the actor George Sanders. One of Gabor’s famous quips was that she was always a good housekeeper, as after every divorce she kept the house!

3. The marrying kind? : PASTOR
A pastor is a minister or priest in some Christian traditions. “Pastor” is the Latin word for “shepherd”.

5. Second wife of Einstein : ELSA
Albert Einstein’s first wife was a fellow student of his at the Zurich Polytechnic, Mileva Marić. The couple had a daughter together before they married in 1903, and then two sons. Albert and Mileva divorced in 1919. Albert was remarried that same year, to Elsa Löwenthal. Albert and Elsa had started a relationship in 1912, while he was still married to his first wife. Elsa had also been married before, divorcing Max Löwenthal in 1908. When Elsa took Albert’s name at the time of their marriage, she was regaining her old family name, as she was also an Einstein by birth. Albert and Elsa were first cousins.

8. Time of self-sacrifice : LENT
In Latin, the Christian season that is now called Lent was termed “quadragesima” (meaning “fortieth”), a reference to the forty days that Jesus spent in the desert before beginning his public ministry. When the church began its move in the Middle Ages towards using the vernacular, the term “Lent” was introduced. “Lent” comes from “lenz”, the German word for “spring”.

9. Lummox : ASS
The word “lummox” comes from East Anglian slang (northeast of London). The term is probably a contraction of “lumbering ox”.

14. He said “You kind of live and die by the serve” : PETE SAMPRAS
Pete Sampras is a retired Greek-American tennis professional. Sampras was rated number one in the world rankings for six years in a row in the nineties.

21. 1960s sitcom matriarch : LILY MUNSTER
Yvonne De Carlo was a Canadian-American actress with a string of appearances in Hollywood movies in the forties and fifties. In the sixties she turned to television, playing Lily Munster on the comedy show “The Munsters”.

26. Bit of fraternity party detritus : BEER CAN
“Detritus” is the loose material that results from the process of erosion. The usage of the term has evolved to man any accumulated material or debris. “Detritus” is Latin for “a wearing away”.

32. Head overseas? : LOO
It has been suggested that the British term “loo” comes from Waterloo (water-closet … water-loo), but no one seems to know for sure. Another suggestion is that the term comes from the card game of “lanterloo” in which the pot was called the loo!

34. Pitching aid : NINE IRON
The 9 iron is the “shortest” of the regular irons, meaning that it lofts the ball the highest and achieves the least distance.

35. [Spoiler alert!] He dies in “The Force Awakens” : HAN SOLO
Han Solo is the space smuggler in “Star Wars” played by Harrison Ford. Ford was originally hired by George Lucas just to read lines for actors during auditions for “Star Wars”, but over time Lucas became convinced that Ford was right for the pivotal role of Han Solo.

39. Sights at a Supercharger : TESLAS
Tesla Motors starting building out a network of fast-charging stations to facilitate longer journeys of their vehicles. Known as Tesla Supercharger stations, there are over 600 such locations around the world as of 2016. These network is arranged into “corridors”, in order to match potential traffic patterns. The first corridor was a route connecting San Francisco, Lake Tahoe, Los Angeles and Las Vegas.

51. “Little Birds” author : NIN
Anaïs Nin was a French author, famous for her journals that she wrote for over sixty years from the age of 11 right up to her death. Nin also wrote highly regarded erotica and cited D. H. Lawrence as someone from whom she drew inspiration. Nin was married to banker and artist Hugh Parker Guiler in 1923. Decades later in 1955, Nin married former actor Rupert Pole, even though she was still married to Guiler. Nin and Pole had their marriage annulled in 1966, but just for legal reasons, and they continued to live together as husband and wife until Nin passed away in 1977.