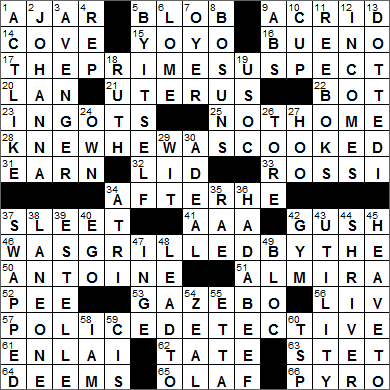 Today’s Wiki-est, Amazonian Googlies
Across
1. Unlatched, say : AJAR
Our word “ajar” is thought to come from Scottish dialect, in which “a char” means “slightly open”.

15. Fluctuate wildly : YO-YO
Would you believe that the first yo-yos date back to 500 BC? There is even an ancient Greek vase painting that shows a young man playing with a yo-yo. Centuries later Filipinos were using yo-yos as hunting tools in the 1500s. “Yo-yo” is a Tagalog (Filipino) word meaning “come-come” or simply “return”.

20. Chilean-based carrier : LAN
LAN Airlines is the flag carrier of Chile. LAN was founded way back in 1929 as Linea Aeropostal Santiago-Arica, making LAN the tenth oldest airline operating in the world today. In 1932 the company changed its name to Línea Aérea Nacional de Chile or LAN Chile, which translates as National Airline of Chile.

22. Turing test participant : BOT
Alan Turing created the Turing test in 1950 as a way of checking a machine’s ability to exhibit intelligent behavior indistinguishable from a human. The essence of the test is an evaluation of a text conversation between machine and human. The evaluation is carried out by someone who only knows that one of the conversants is a machine, but not which one is which.

Alan Turing was an English mathematician. He was deservedly well-respected for his code-breaking work during WWII at Bletchley Park in England. However, despite his contributions to cracking the German Enigma code and other crucial work, Turing was prosecuted for homosexuality in 1952. He agreed to chemical castration, treatment with female hormones, and two years later he committed suicide by taking cyanide. Turing’s life story is told in the 2014 film “The Imitation Game” with Benedict Cumberbatch playing the lead. I thoroughly enjoyed that film …

33. Bruno ___ Prize (astrophysics award) : ROSSI
Bruno Rossi was an experimental physicist from Italy noted for the study of cosmic rays.

37. Fall that might cause falls : SLEET
Apparently “sleet” is a term used to describe two weather conditions. One is a shower of ice pellets, smaller than hail, and the second is a mixture of rain and snow, with the snow melting as it falls. It’s the second definition that I have always used …

41. Motorist’s aid, for short : AAA
The American Automobile Association (AAA) is a not-for-profit organization focused on lobbying, provision of automobile servicing, and selling of automobile insurance. The AAA was founded in 1902 in Chicago and published the first of its celebrated hotel guides back in 1917.

50. ___ de Saint-Exupéry, author of “The Little Prince” : ANTOINE
“Le Petit Prince” is a celebrated French novella written by Antoine de Saint-Exupéry and first published in 1943. “Le Petit Prince” (The Little Prince) is the most read book in France, and the book most translated from French. The philosophical tale recounts the story of a stranded pilot meeting a young prince who falls to Earth from an asteroid. Saint-Exupéry was himself a pioneering aviator. He wrote “Le Petit France” while living in exile in the US due to the German occupation of France during WWII.

51. Titular queen of Castile in a Handel opera : ALMIRA
“Almira, Queen of Castile” was the first opera composed by George Frideric Handel, when he was just 19 years old.

52. Political leader? : PEE
The leading letter of the word “political” is the letter P (pee).

53. Feature of some gardens : GAZEBO
A gazebo is a roofed structure, often octagonal in shape, that is found mainly in public spaces. Gazebos can be quite small, or can be large enough to perhaps serve as a bandstand. The actual etymology of the term “gazebo” seems to be a bit of a mystery, and there are some misconceptions out there.

61. Bygone name in Chinese politics : ENLAI
Zhou Enlai (also Chou En-Lai) was the first government leader of the People’s Republic of China and held the office of Premier from 1949 until he died in 1976. Zhou Enlai ran the government for Communist Party Leader Mao Zedong, often striking a more conciliatory tone with the West than that of his boss. He was instrumental, for example, in setting up President Nixon’s famous visit to China in 1972. Zhou Enlai died just a few months before Mao Zedong, with both deaths leading to unrest and a dramatic change in political direction for the country.

62. Gallery on the Thames : TATE
The museum known as “the Tate” is actually made up of four separate galleries in England. The original Tate gallery was founded by Sir Henry Tate as the National Gallery of British Art. It is located on Millbank in London, on the site of the old Millbank Prison, and is now called Tate Britain. There is also the Tate Liverpool in the north of England located in an old warehouse, and the Tate St. Ives in the west country located in an old gas works. My favorite of the Tate galleries is the Tate Modern which lies on the banks of the Thames in London. It’s a beautiful building, a converted power station that you have to see to believe.

63. Proofer’s “oops” : STET
“Stet” is a Latin word meaning “let it stand”. In editorial work, the typesetter is instructed to disregard any change previously marked by writing the word “stet” and then underscoring that change with a line of dots or dashes.

65. One of two Danish kings : OLAF
Olaf I was king of Denmark from 1086 to 1095. Olaf is the only Danish king for whom a burial site is not known. There is speculation that his body was cut into pieces and scattered across the country in an effort to rid Denmark of the misfortunes that plagued Olaf’s reign as king.

Down
2. Daughter of Sweeney Todd in the Sondheim musical : JOHANNA
“Sweeney Todd” was originally a 1936 film, and later in 1973 a play, then a 1979 musical and a movie adaptation of the musical in 2007. After Sweeney Todd has killed his victims, his partner in crime Mrs. Lovett helped him dispose of the bodies by taking the flesh and baking it into meat pies that she sold in her pie shop. Ugh!

Stephen Sondheim has won more Tony Awards than any other composer, a total of eight. He has a long list of stage (and big screen) successes including “A Funny Thing Happened on the Way to the Forum”, “A Little Night Music”, “Sweeney Todd” and “Into the Woods”. Sondheim is big fan of crosswords and had a whole series of cryptic crosswords published in “New York” magazine in the sixties.

6. Capital of Togo : LOME
Lome is the capital city of Togo, in West Africa.

7. ___ and terminer (criminal court) : OYER
“Oyer and terminer” is a term that originates in English law and that applies in some US states. Here in the US, oyer and terminer is the name given to some courts of criminal jurisdiction. Even though it has its origins in English law, the words “oyer” and “terminer” come from French (via Anglo-Norman) and mean “to hear” and “to determine”.

8. Ship mates : BOSUNS
A boatswain works on the deck of a boat. A boatswain is unlicensed, and so is not involved in the navigation or handling of the vessel. He or she has charge of the other unlicensed workers on the deck. Boatswain is pronounced “bosun” and this phonetic spelling is often used interchangeably with “boatswain”. The contraction “bo’s’n” is also very popular.

11. Some sneakers : REEBOKS
The brand name Reebok was adopted as the new company name for Foster Shoes of the UK in 1960. The name Reebok (more commonly “Rhebok”) is an Afrikaans word for an antelope, and comes from the term “roe buck”.

18. Pity : RUTH
“Ruth” is a term meaning compassion or sorrow, pity for another. “Ruthless” would be the opposite.

19. Natl. sports org. : USOC
The United States Olympic Committee (USOC) has a federal charter but it doesn’t receive any funds from the US government. As such, it has to engage in fundraising just like any other charitable organization. The USOC was founded in 1894, and is headquartered in Colorado Springs.

29. “Few love it unless in themselves,” per Lord Chesterfield : WIT
Philip Stanhope, 4th Earl of Chesterfield was an English statesman and man of wit. He is often quoted, with a few examples being:

– I recommend you to take care of the minutes, for the hours will take care of themselves.
– Sex: the pleasure is momentary, the position ridiculous and the expense damnable.
– Wit is so shining a quality that everybody admires it most people aim at it, all people fear it, and few love it unless in themselves. A man must have a good share of wit himself to endure a great share of it in another.

34. “The Bell of ___” (Longfellow poem) : ATRI
Henry Wadsworth Longfellow wrote “The Sicilian’s Tale; The Bell of Atri”, a narrative poem set in the small town of Atri in the Abruzzo region of Italy.

36. Was unhappy (with) : HAD A BEEF
A “beef” is a complaint or a grievance. It’s not quite clear how “beef” came to have this meaning, but one suggestion is that derives from the habit of soldiers at the end of the 1800s complaining about the quality or availability of beef in their rations.

39. One-named Grammy winner for “American Boy,” 2008 : ESTELLE
Estelle is a singer-songwriter from London who hit the top of the charts with her song “American Boy” that featured Kanye West.

43. One of a pair of Monopoly properties : UTILITY
In most versions of the board game Monopoly, the two utilities are Water Works and Electric Company.

44. Kennedy in-law : SHRIVER
Sargent Shriver was the running mate of George McGovern, the Democratic nominee for US President in the 1972 race. Shriver was a member of the Kennedy clan, as he was married to Eunice Kennedy, sister to President John F. Kennedy. Among Shriver’s many roles in public life, he was the man behind the founding of the Peace Corps.

45. Nautical command : HEAVE TO
The nautical command “heave to” is an instruction to bring a vessel to a halt. The command especially applies to the maneuvering of a sailing vessel into the wind and trimming the sails so that they act against each other, and so keeping the head of the boat pointed into the wind.

47. Playwright William : INGE
Playwright William Inge had a run of success on Broadway in the early fifties. Inge’s most celebrated work of that time was the play “Picnic”, for which he was awarded a Pulitzer Prize. The original 1953 cast of “Picnic” included a young male actor making his debut on Broadway. His name was Paul Newman.

55. Companion of Butch and Sundance : ETTA
Etta Place is the schoolteacher character played by the lovely Katharine Ross in the 1969 movie “Butch Cassidy and the Sundance Kid”.

58. “___ Malala” (2013 best-selling autobiography) : I AM
“I Am Malala: The Story of the Girl Who Stood Up for Education and Was Shot by the Taliban” is a memoir co-written by Malala Yousafzai and British journalist Christina Lamb. The title tells the essence of her Malala’s story. She started a blog when she was 11 or 12, outlining her life in northwest Pakistan under occupation by the Taliban. As the Pakistani military regained control of the area, Malala’s story was told in a documentary and she was frequently giving interviews. One day a gunman came looking for her, and found her on her schoolbus. He shot Malala three times, with one bullet going into her forehead. She survived, and was taken to England to recuperate. She was a co-recipient of the Nobel Peace Prize in 2014 at the age of 17, making her the youngest ever Nobel laureate.

59. Modern prefix with gender : CIS-
The term “cisgender” is now used as the opposite of “transgender”. Cisgender people have a gender identity that matches the sex they were assigned at birth.