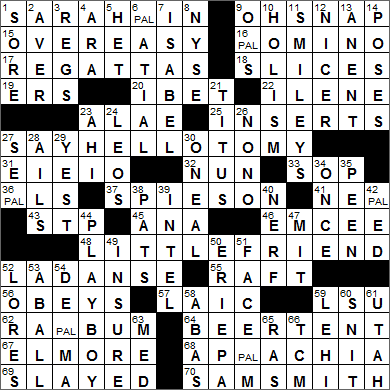 9. Response to a verbal slam : OH SNAP!
Oh snap is some more street talk. It is used as a retort to someone who makes a verbal dig at you. It was apparently popularized by Tracy Morgan on “Saturday Night Live”.

16. Golden galloper : PALOMINO
A palomino is a horse with a gold coat and a white mane and tail. The color was prized by TV and film producers in the golden age of the Western. Two of the most famous palominos were Trigger ridden by Roy Rogers, and Mr. Ed who had his own TV show.

17. Tests of crews’ control? : REGATTAS
The word “regatta” is Venetian dialect and was originally used to describe boat races among the gondoliers of Venice on the Grand Canal back in the mid-1600s.

19. You might leave them in stitches, for short : ERS
Emergency rooms (ERs)

27. With 48-Across, memorable Al Pacino movie line … or a hint for this puzzle’s theme : SAY HELLO TO MY …
(48A. See 27-Across : … LITTLE FRIEND)
“Say hello to my little friend!” is a famous line uttered by Al Pacino’s character in the movie “Scarface”, as he brandishes a machine gun.

31. Refrain from farming? : E-I-E-I-O
There was an American version of the English children’s song “Old MacDonald Had a Farm” (E-I-E-I-O), that was around in the days of WWI. The first line of the US version goes “Old MacDougal had a farm, in Ohio-i-o”.

32. Role in “Doubt” or “Dead Man Walking” : NUN
“Doubt” is a 2008 film adaptation of a stage play by John Patrick Shanley, for which he won a Pulitzer. The film stars Philip Seymour Hoffman as a priest accused of wrongdoing with a young boy, and Meryl Streep as a nun who takes up the cause of holding the priest accountable. It’s a powerful and disturbing tale.

37. Tracks with malware, say : SPIES ON
“Malware” is a collective term for software and program code that is created to intentionally disrupt and exploit computer systems. Viruses, worms, trojan horses and spyware are all covered by the term. “Malware” is short for “malicious software”.

41. Ambitious climbers’ mecca : NEPAL
Nepal lies to the northeast of India. Today, the state is known as the Federal Democratic Republic of Nepal. In 2008, the Communist Party of Nepal won the country’s general election. Soon after, the Assembly voted to change the form of government, moving away from a monarchy and creating a secular republic.

43. “The Racer’s Edge” product : STP
STP is a brand name for automotive lubricants and additives. The name STP comes from “Scientifically Treated Petroleum”.

45. Ivanovic of women’s tennis : ANA
Ana Ivanovic is a Serbian tennis player, and former world number one. As well as playing tennis, she also studied finance at university in her native Belgrade.

46. One making introductions : EMCEE
The term “emcee” comes from “MC”, an initialism standing for Master or Mistress of Ceremonies.

52. 1909 Matisse masterpiece : LA DANSE
“La Danse” is large painting by Henri Matisse completed 1910, depicting five dancing figures. I had the privilege of seeing the work in the Hermitage Museum in St. Petersburg quite a few years ago.

57. Secular : LAIC
Anything described is laic (or “laical, lay”) is related to the laity, those members of the church who are not clergy. The term “laic” ultimately comes from the Greek “laikos” meaning “of the people”.

59. Alma mater of 30-Down, for short : LSU
(30D. 2000 N.B.A. M.V.P. with the Lakers : O’NEAL)
The LSU Tigers are the sports teams of Louisiana State University (LSU). They are officially known as the Fightin’ Tigers, and the school mascot is “Mike the Tiger”. The name comes from the days of the Civil War, when two Louisiana brigades earned the nickname the “Louisiana Tigers”. Given the French/Cajun history of Louisiana, the LSU fans use the cheer “Geaux Tigers” instead of “Go Tigers”.

62. Kanye West’s “Yeezus,” for one : RAP ALBUM
Kanye West is a rap singer from Atlanta, Georgia. That’s all I know …

64. Oktoberfest venue : BEER TENT
Oktoberfest is a 16-day beer festival in Munich that actually starts in September. About six million people attend every year, making it the largest fair in the world. I’ve been there twice, and it really is a great party …

67. Author ___ Leonard : ELMORE
Elmore Leonard used to write a lot of westerns in the fifties and moved onto crime and suspense novels later in his career. A lot of Leonard’s books have made it to the big screen, including “Get Shorty” and “Mr Majestyk”.

68. Coal-mining center : APPALACHIA
Appalachia is the name of a region that encompasses the central and southern portions of the Appalachian Mountains. Major cities included in the region include Pittsburgh, Knoxville, Chattanooga, Birmingham and Asheville.

70. 2014 Record of the Year winner for “Stay With Me” : SAM SMITH
Sam Smith is a singer from London. I think that the only thing I’ve heard of his is the theme song from the 2015 James Bond movie “Spectre”, which is called “Writing’s on the Wall”.

7. “The Adventures of ___” (Ogden Nash poem) : ISABEL
The poet Ogden Nash is well known for his light and humorous verse. Here’s a favorite of mine:

8. Big Board inits. : NYSE
The New York Stock Exchange (NYSE) can give some quite descriptive ticker symbols to companies, for example:

9. Some Australian exports : OPALS
97% of the world’s opals come from Australia, so it’s no surprise perhaps that the opal is the national gemstone of the country. The state of South Australia provides the bulk of the world’s production, about 80%.

10. Big-picture approach to patient care : HOLISM
A holistic approach to medicine emphasises not only physical symptoms but also social considerations and the environment.

11. Many emojis : SMILEYS
An emoji is a character found on many cell phones now that is like an emoticon, but more elaborate.

13. Concerning : ANENT
“Anent” is a preposition meaning “regarding, concerning”.

21. Roman emperor who completed the Colosseum : TITUS
Titus Flavius Verspasianus was a successful military commander and Roman Emperor from 79 to 81 AD. It was Titus who laid siege to and destroyed the city and temple of Jerusalem, for which he was honored with the erection of the Arch of Titus that stands in Rome to this day. The Arch of Titus is the inspiration for many other famous arches around the world including the l’Arc de Triomphe in Paris.

The Roman Emperor Nero had a large (30m tall) statue made of himself in bronze, which he located outside of his palace. After he died, the bronze was altered and renamed the Colossus Solis, after the Roman sun god. It was later moved and located near the huge amphitheater that became known as the Colosseum. It is likely that the amphitheater actually took its name from the Colossus statue.

23. Sushi bar offering : AHI
Yellowfin and bigeye tuna are usually marketed as “ahi”, the Hawaiian name. They are both big fish, with yellowfish tuna often weighing over 300 pounds, and bigeye tuna getting up to 400 pounds.

24. They may be conceived around Halloween : LEOS
Leo is the fifth astrological sign of the Zodiac. People born from July 23 to August 22 are Leos.

27. Calyx part : SEPAL
The calyx is the collective name for the sepals of a flower, the outermost whorl that forms the flower (the pretty part!).

35. Hammer extremity : PEEN
The peen of a hammer is on the head, and is the side of the head that is opposite the striking surface. Often the peen is in the shape of a hemisphere (as in a ball-peen hammer), but usually it is shaped like a claw (mainly for removing nails).

38. Brady bunch, in headlines : PATS
The New England Patriots football team was founded in 1959 as the Boston Patriots. The “Patriots” name was selected from suggestions made by football fans in Boston. The team played at several different stadiums in the Boston area for just over ten years, before moving to their current home base in Foxborough, Massachusetts. At the time of the move, the “Boston” name was dropped and changed to “New England”.

Tom Brady plays quarterback for the New England Patriots. Brady is from San Mateo, California, which isn’t very far from here. Brady dated actress Bridget Moynahan for a couple of years, and the pair have a child together.

39. Bond yield? : INTEL
James Bond is the creation of the writer Ian Fleming. Fleming “stole” the James Bond name from an American ornithologist. The number 007 was also “stolen” from the real-life, 16th century English spy called John Dee. Dee would sign his reports to Queen Elizabeth I with a stylized “007” to indicate that the reports were for “her eyes only”.

40. Big name in foam-based weaponry : NERF
Nerf is the name given to the soft material used in a whole series of toys designed for “safe” play indoors. The Nerf product is used to make darts, balls and ammunition for toy guns. “NERF” is an acronym, standing for Non-Expanding Recreational Foam.

47. Sch. along the Charles : MIT
The Massachusetts Institute of Technology (MIT) was founded in 1861 and first offered classes in 1865, in the Mercantile building in Boston. Today’s magnificent campus on the banks of the Charles River in Cambridge opened in 1916.

50. Quaker State city subject to lake-effect snow, for short : ERIE, PA
Today “Quaker State” is an unofficial name for Pennsylvania, as it is more correctly known as the Keystone State, and has been so since 1802. However, in colonial times Pennsylvania was known officially as the Quaker Province, recognizing the beliefs and doctrine of the state’s founder, William Penn.

51. Gesture indicating “How stupid of me!” : FACEPALM
A facepalm is the gesture made by lowering one’s face into the palm of one’s hand or hands. A facepalm can be an expression of surprise perhaps, frustration or embarrassment.

59. With 61-Down, city named for a Book of Mormon prophet : LEHI
(61D. See 59-Down : UTAH)
The Utah city of Lehi was first settled in 1851. The settlement grew rapidly and was incorporated in the second year of its existence, in 1852. The name Lehi was chosen after a prophet in the Book of Mormon.

60. Bad mood : SNIT
The exact etymology of “snit”, meaning “fit of temper”, isn’t really known. The term was first used in print in the play “Kiss the Boys Goodbye” by Clare Booth Luce, which dates back to the 1930s and is set in the American South.

63. Subject of a scrip : MED
“Scrip” is an informal term for a prescription.