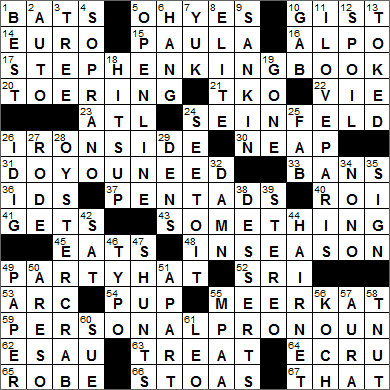 CROSSWORD SETTER: Timothy Polin
THEME: What It Is … today’s themed clues are the same, different interpretations of the phrase “What Is It”.

Today’s Wiki-est, Amazonian Googlies
Across
14. Latvian capital : EURO
Euro coins are issued by all the participating European states. The reverse side is a common design used by all countries, whereas the obverse is a design specific to each nation. For example, the one euro coin issued by Malta features the Maltese Cross. That Maltese euro is legal tender right across the eurozone. Of course the Irish euro features a harp.

15. Creamer of the L.P.G.A. : PAULA
Paula Creamer is a American golfer, the current US Open champion. She is a local here where I live in the San Francisco Bay Area. Indeed, as her career took off we were members of the same golf club here in town. I taught her everything she knows …

16. Dinner in a bowl : ALPO
lpo is a brand of dog food first produced by Allen Products in 1936, with “Alpo” being an abbreviation for “Allen Products”.

21. Pugilistic victory, briefly : TKO
In boxing, a knockout (KO) is when one of the fighters can’t get up from the canvas within a specified time, usually 10 seconds. This can be due to fatigue, injury, or the participant may be truly “knocked out”.

23. Falcon’s home: Abbr. : ATL
The Atlanta Falcons joined the NFL in 1965. The team name was suggest by a schoolteacher called Miss Julia Elliott. Elliot suggested that “the Falcon is proud and dignified, with great courage and fight. It never drops its prey. It is deadly and has a great sporting tradition.”

24. Sitcom whose four main characters are convicted of a crime in the final episode : SEINFELD
“Seinfeld” aired for nine seasons on NBC, and in 2002 was declared by TV Guide as the “greatest television program of all time”. After the show completed its run in 1998, each of the main supporting actors made failed attempts to launch new sitcoms. This phenomenon became known as “the Seinfeld curse”, but Julia Louis-Dreyfus finally managed to break free of it with a successful five-season run in “The New Adventures of Old Christine”, and is also currently starring in “Veep”.

26. Old TV title role for Raymond Burr : IRONSIDE
“Ironside” is a classic police television drama that first ran from 1967 to 1975. Star of the show is Raymond Burr playing the partially paralyzed former Chief of Detectives Robert T. Ironside. Ironside was forced to retire from the SFPD when he was shot by a sniper, but ended up as special consultant to the police department.

Alexandre Dumas’ “Three Musketeers” are Athos, Porthos and Aramis, and their young protégé is D’Artagnan. A musketeer was an infantry soldier who was equipped with a musket. Funnily enough, the three “musketeers” really don’t use their muskets, and are better known for their prowess with their swords.

45. Grub : EATS
“Grub” is slang for food. The word “grub” has been used in this sense since way back in the 1600s, possible derived from birds eating grubs.

52. ___ Lanka : SRI
The name Sri Lanka translates from Sanskrit into English as “venerable island”. Before 1970, Sri Lanka was known as Ceylon, a name given to the country during British rule.

53. Rainbow, for one : ARC
Sunlight shining through airborne water droplets can produce rainbows. The water droplets act as little prisms, dispersing the white light into its constituent colors. Sometimes we see double rainbows. If we look carefully, the order of the colors in the first and second arcs is reversed.

55. Timon of “The Lion King,” e.g. : MEERKAT
The meerkat (also called a “suricate”) is a mongoose-like mammal that is native to parts of Africa.

62. Biblical twin described as a “cunning hunter” : ESAU
Esau was the twin brother of Jacob, the founder of the Israelites. When their mother Rebekah gave birth to the twins “the first emerged red and hairy all over (Esau), with his heel grasped by the hand of the second to come out (Jacob)”. As Esau was the first born, he was entitled to inherit his father’s wealth (it was his “birthright”). Instead, Esau sold his birthright to Jacob for the price of a “mess of pottage” (a meal of lentils).

64. Shade darker than eggshell : ECRU
The shade called ecru is a grayish, yellowish brown. The word “ecru” comes from French and means “raw, unbleached”. “Ecru” has the same roots as our word “crude”.

66. Classical promenades : STOAS
A stoa was a covered walkway in Ancient Greece. A stoa usually consisted of columns lining the side of a building or buildings, with another row of columns defining the other side of the walkway. The columns supported a roof. Often stoae would surround marketplaces in large cities.

11. Song lyric before “in the winter when it drizzles” and “in the summer when it sizzles” : I LOVE PARIS
“I Love Paris” is a song from the Cole Porter musical “Can-Can”.

The Cole Porter musical “Can-Can” was first produced on Broadway, in 1953, where it ran for two years. There was a very successful film adaptation (which I saw recently … it’s good stuff) released in 1960, starring Shirley MacLaine, Frank Sinatra and Maurice Chevalier. During filming, the Soviet leader Nikita Khrushchev visited the set as part of a tour of 20th Century Fox studios. He made a big splash in the media at the time describing what he saw as “depraved” and “pornographic”.

13. Took a hit, in a way : TOKED
“Toke” is a slang term for a puff on a marijuana cigarette or on a pipe containing the drug.

28. Chesapeake Bay delicacy : OYSTER CRAB
The oyster crab is a tiny crab, with adults measuring less than half an inch across. The crab gets his name from its habitat, living inside the gills of oysters and clams.

34. Taboo : NO-NO
The word “taboo” was introduced into English by Captain Cook in his book “A Voyage to the Pacific Ocean”. Cook described “tabu” (likely imitative of a Tongan word that he had heard) as something that was both consecrated and forbidden.

39. Binaural : STEREO
Monophonic sound (“mono”) is sound reproduced using just one audio channel, which is usually played out of just one speaker. Stereophonic sound is reproduced using two audio channels, with the sound from each channel played out of two different speakers. The pair of stereo speakers are usually positioned apart from each other so that sound appears to come from between the two. Quadraphonic sound (4.0 surround sound) uses four audio channels with the sound played back through four speakers often positioned at the corners of the room in which one is listening.

42. Sr.’s challenge : SAT
Today the standardized test for admission to colleges is known as the SAT Reasoning Test, but it used to be called the Scholastic Aptitude Test and Scholastic Assessment Test, which led to the abbreviation SAT.

46. Thsi clue has one : TYPO
And that would be the spelling of the word “this”.

47. Redirects, as a train : SHUNTS
On a railroad, shunting is the practice of moving carriages and other rolling stock from one line to another.

55. Grp. assigning film ratings : MPAA
The Motion Picture Association of America’s (MPAA) film-rating system (PG-13, R, etc.) is purely voluntary and is not backed by any law. Movie theaters agree to abide by the rules that come with the MPAA ratings in exchange for access to new movies.

56. ___ brothers, big political donors : KOCH
Koch Industries is a huge company with diverse interests, but with the oil industry at its core. The company was founded in 1940 by Fred C. Koch. Reportedly, Koch is the second largest privately-held company in the US, after Cargill. Today Koch Industries is owned by two of Fred’s sons: Charles and David H. Koch. Famously, the Koch Brothers are known for contributing hundreds of million dollars to conservative political causes and candidates.

61. “The Revenant” star, to fans : LEO
Hollywood star Leonardo DiCaprio is from Los Angeles, California. DiCaprio’s mother was visiting a museum in Italy when she was pregnant and felt the first kick of her unborn child. At the moment of that first kick, Mama DiCaprio was looking at a painting by Leonardo da Vinci, and so named her son Leonardo.